ver the course of nearly two decades, Magic has given us several different looks at the one-mana mana acceleration creature.

The originals are of course "lightning rod" Birds of Paradise and that first in a long line, Llanowar Elves. Birds of Paradise has long been the gateway to multicolored decks. The first great one I had seen was Worth Wollpert's mish-mash of Erhnam Djinn, Storm Seeker, and Armageddon. (Worth, now boss of Magic Online, was the first friend I had who proved capable of winning a PTQ, and set for me the example—from the very beginning—to go my own way regardless of what the rest of the metagame was doing.) Last summer Birds of Paradise continued to do what it has always done in the various Mythic Conscription decks; and this year, a singleton Birds of Paradise contributes almost like a two-mana accelerator when paired with Green Sun's Zenith in the resurgent Valakut, the Molten Pinnacle builds.

Llanowar Elves has, in some sense, less than one-fifth the functionality of a Birds of Paradise. Not only does it only tap for green mana (rather than the full five colors like Birds of Paradise), but Llanowar Elves doesn't fly. While the flying ability of the generally noncombatant 0/1 Birds tends not to come up very often, memorable tales of "Bird Lightning" (Birds of Paradise + Reckless Charge) and miraculous Bird topdecks staving off lethal flying attackers have grown into legend... for a reason. 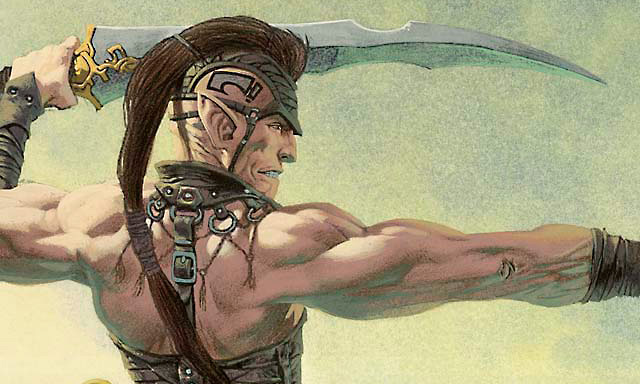 While it doesn't fly; while it doesn't tap for black, or blue, or red, or white, Llanowar Elves has always had two things going for it, making it a compelling partner to Birds of Paradise in decks looking to break the Rule of Four, and a choice over the Birds in many a successful list: 1) Llanowar Elves is an Elf, and more importantly 2) that 1 point of power.

Its positive power has been an important quality bringing players back to Llanowar Elves year after year. Llanowar Elves has carried Umezawa's Jitte into battle—and effectively—in spots where the Birds would not have been able to obtain a first charge counter. It has loaded the bases for Scab-Clan Mauler's second-turn cleanup. There have simply been many decks that have wanted a potential attacker (even when tiny) more than the flexibility of Birds of Paradise. Thus, both have contributed from the one; and from the very beginning.

Birds of Paradise's variations and different looks over the years have been relatively few and far between. The most significant would probably be Noble Hierarch—also a 0/1 creature that produces more than one kind of mana—but the Hierarch's sometimes-significance offensively and grounded stature can put it, arguably, more in the Llanowar Elves pile (and reasonably, still, as an echo to both but an update to neither).

On balance, Llanowar Elves has had any number of imitators and sometimes-allies. The closest analogue is of course Fyndhorn Elves (basically just Llanowar Elves), dating back to the first "big set" expansion, Ice Age. I have always been a fan of Boreal Druid... Boreal Druid, tapping for

) rather than any particular color was kind of like Llanowar Elves's kid sister... but there were just times where you wanted more Llanowar Elves to increase the likelihood of a second-turn Call of the Herd or Troll Ascetic, and in the era of Umezawa's Jitte, Boreal Druid just got the job done. Arbor Elf filled in for Llanowar Elves in a format that really wanted a one-mana accelerator (but didn't have Llanowar Elves proper), and has also played the redundancy card in other contexts where you really want more than four... especially when being an Elf can prove an additional bonus.

" because there is an implicit likelihood of having a basic Forest in play when you run it out there, but theoretically it can do more; for example, you could untap a Stomping Ground to produce

. Arbor Elf isn't "better" than Llanowar Elves or anything; when you cast it with a Copperline Gorge, it is possible it won't be doing anything on turn two (but that isn't usually the case, no).

Of all the different looks and familiar variations on Llanowar Elves to date, the most special, and different (without breaking the basic model) has always been, to me, Elves of Deep Shadow. 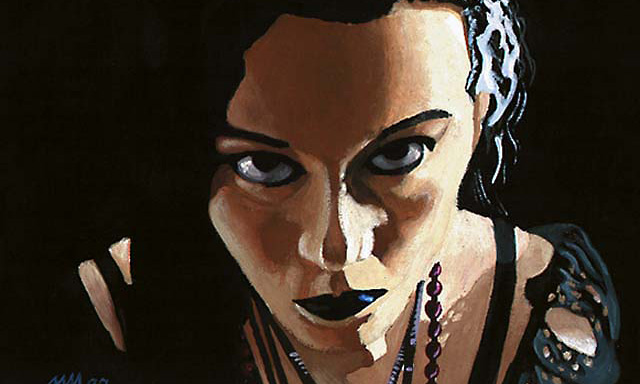 First of all, Elves of Deep Shadow (The Dark version, obviously) is kind of beautiful. Striking.

Secondly, it is like there is a price associated with making

that resonates with that inner Vorthos that gave birth to even hardened Spikes. As we said with Arbor Elf, it is implicit that you can make

already... so R&D is charging us a little something extra for that

Every Elves soul in that Top 8 (meaning very close to every soul, actually) had Birchlore Rangers and Heritage Druid on one, but not even Jan Doise and Sebastian Thaler—who were also Gilt-Leaf Palace players with Thoughtseize in their sideboards—had Elves of Deep Shadow like Luis did.

Elves of Deep Shadow gave LSV a little more redundant speed, and gave him a little bit more likely a chance to run out an early Thoughtseize. It was the difference that made the difference.

Avacyn's Pilgrim, you've got some impressive shoes to fill. 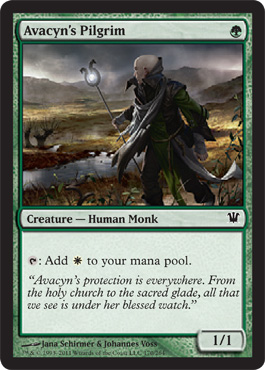 So what's going on with Avacyn's Pilgrim?

Superficially, we see a card that is the latest in a long line of Llanowar Elves: One mana for a 1/1 that taps for mana... a Boreal Druid with a little bit of a different specialty.

Calibrated against what has come before, though? Avacyn's Pilgrim should be compared against Elves of Deep Shadow, not Llanowar Elves!

So what is "the difference that makes the difference" in this case? Elves of Deep Shadow cost you a point of life in order to produce a

Sure, it makes less sense for

to cost you extra to produce colored mana than

. We expect black to be a jerkface about things like that. Black is the color of Necropotence, Ad Nauseam, Dystopia, and Dismember. We expect black to gouge us a little extra for something we want. On balance we might not be surprised for white to give us a point of life when we pick up our mana, "Here, my son... Have a life point with your white mana. Avacyn hearts you, et cetera."

But let's pull back and look at this from a game perspective. 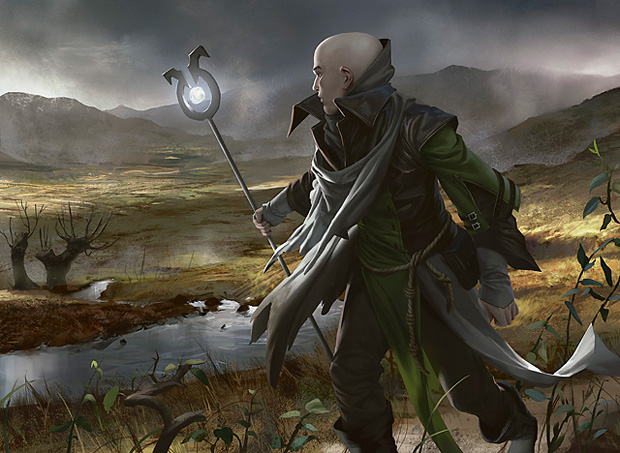 Avacyn's Pilgrim isn't just a cool one-drop. Whether it is a tournament-viable card shouldn't even be a question on the table. Llanowar Elves is basically an evergreen, and even Boreal Druid (which basically taps for colorless) was situationally quite good. Avacyn's Pilgrim is something different: It is implicit that we already have green mana. As such, Avacyn's Pilgrim feels more to me like 2/3 of a Noble Hierarch, a less ornery Elves of Deep Shadow, both flexible and painless... not "just" another Llanowar Elves.

... But what does it represent?

Green and white have been buddies from the time of the first Pro Tour. ErhnamGeddon much? This card seems to imply that they will continue to go forward, arms linked, and intimately.

There has been some move towards green-insensitivity in terms of colored mana costs, despite an overall tendency in recent years to make it easy to draw against different colors, for most decks. So no, despite the color bleed represented by the ubiquitous Dismember, Avacyn's Pilgrim isn't going to help you play a second-turn Leatherback Baloth, and maybe it's a good thing Garruk Relentless is such an easy-on-the-green option (as far as Garruks go)... because Avacyn's Pilgrim decks may have a little trouble producing the

, but not every time; Avacyn's Pilgrim would have helped a lot in that regard.

One thing that you may not have noticed yet...

For all the comparisons to Llanowar Elves and / or Elves of Deep Shadow, Avacyn's Pilgrim is in fact a Human Monk.

... So, regardless of what other virtues come of being a 1/1 creature for one mana, Avacyn's Pilgrim isn't going to be jumping in front of an early Stromkirk Noble.