(*All due respect to Kai's fellow Hall of Fame member Raphael Levy and his domain-based Gaea's Might Get There.)

This was a Grand Prix–winning deck from the first time we had Worldly Counsel and so on in Block Constructed. This is what we think of as a classic "Domain" deck (as opposed to, say, Domain Zoo).

Kai's deck was all about power. This deck could do basically anything. If the mana was there, the Domain deck could play essentially any spell in the format. How often is it that you have a card-drawing spell that is preferable to Fact or Fiction? In this case, instead of splitting five cards, you get to keep all five (with Allied Strategies). Ordered Migration was a kind of Dragon ... 5 power and 5 toughness for five mana, split five different ways for potential defense. Collective Restraint was ... well, it was just very good at keeping opponents off, and relatively early.

However in the long game, legitimate bombs like Legacy Weapon (destroy anything) and Yawgmoth's Agenda (do anything all over again) could ensure a slow, painful, and usually successful (eventually) campaign.

So can this kind of deck make a comeback with the return of the domain mechanic in Conflux?

I think that Exploding Borders is probably a mite too expensive for a basic land search card, and a little narrow for its "Tribal Flames" side, but Voices from the Void has a very Mind Sludge feel to it. The original Domain players never really got a chance to use Rampant Growth, and with the incredible gold cards available in Standard, there might just be enough incentive with Worldly Counsel to lace all the cards together ... like the "Quick n' Toast" five-color control deck, but a little more formal.

That is, unless the little tiny blue creatures have something to say about it ...

... Which is my painfully inelegant way of transitioning to the next kind of control deck.

Today the most prevalent kind of control deck in Standard or Extended is typically aligned to the Faeries tribe. As we are in the midst of an Extended PTQ season, I am going to focus on the latter format and remind you that Faerie Wizards is the most popular deck in the current Extended. So popular, in fact, that seven of the eight decks to make the single elimination rounds of a recent Burlington, NC PTQ featured both Vendilion Clique and Umezawa's Jitte!

Just look at the most recent week's worth of PTQ blue and grey boxes:

... But we've talked about Faeries several times already this season. It is arguably the most flexible deck in the format, capable of playing a tempo-oriented game deploying Vendilion Clique and Venser, Shaper Savant at the end of turn, dominating creature decks with the power of Vedalken Shackles and Umezawa's Jitte, or playing Counter-Sliver, protecting the clock with its light permission.

Faerie Wizards is a fine anti-combination deck in general (it is particularly well suited at smothering Glimpse of Nature &c. with Spellstutter Sprite), yet—as we discussed last week—has sizable issues with the popular Storm decks.

All in all this is a strange segue into the principle topic of this week, White-Blue 'Tron.

Let's look back to the week of January 17-18, the week of Grand Prix–Los Angeles. There was an oldie-but-goodie with a blue box next to its name...

Through another week of smiling Faeries (and two Faerie Wizards wins!) we see a control favorite with a powerful mana base:

White-Blue 'Tron decks play somewhat similarly to conventional white-blue control decks, descendants of Weissman all. They have permission and card draw from blue, Wrath of God from white. The difference is that because 'Tron decks have to dedicate more than half of their mana bases to colorless lands, these decks typically try to cheat a bit on colored mana costs. That is why you will usually see a spell like Condescend in a deck like this, or Remand in some versions, despite the fact that the former was never widely played outside of these kinds of decks and the latter has lost a lot of favor (though also, of course, a nod to the fact that Condescend or Remand can help dig you to a full 'Tron).

But when we say "somewhat" we mean that there is a steep incentive to playing 'Tron over regular white-blue. That is the opportunity to play incredibly expensive spells, such as Spell Burst with the buyback, Sundering Titan on eight, or Mindslaver and the activation on ten. The 'Tron deck plays a bigger Decree of Justice and has a lot of card-drawing redundancy (this version plays eight copies total of Thirst for Knowledge and Gifts Ungiven), which other control decks just can't muster.

Using its card advantage, 'Tron can afford to play one-for-one (or near one-for-one) Magic, relying on the card drawing to build incremental advantages ... not dissimilar to the progressive positional jockeying of a deck like The Rock, but with more immediate power and typically more dramatic effect.

White-Blue 'Tron has Tolaria West, which accomplishes several objectives for this deck. First of all, Tolaria West can complete the 'Tron, matching up Urza’a Mines, Urza’s Power Plants, and Urza’s Towers. It can grab the singleton Academy Ruins for Mindslaver recursion, or it can find the necessary zeroes in the deck list: Chalice of the Void for combo decks, Engineered Explosives for little creatures, or Tormod's Crypt for the opposite graveyard.

Due to its half-nature as a white-blue control deck, this sort of a 'Tron can play flexible defense. For example, it can hold the ground while gaining life with Kitchen Finks against Zoo, disrupt a combo deck while summoning a reasonable clock with Vendilion Clique, or lock the Lightning Bolt deck completely out of the game with Circle of Protection: Red.

It is generally a mistake to assume that drawing a single sideboard card will defeat a prepared opponent playing a top combo deck. For example Chalice of the Void will usually slow a Storm deck down somewhat, but if you don't have your opponent on a clock, you can expect to lose, eventually, to Shattering Spree and the scripted combo. However, a deck like 'Tron can lace together many advantages, for example its card advantage to draw its spoilers, or to stack multiple (possible) "I win" cards one on top of the next.

Here is a video that I think outlines exactly that sentiment. It is about playing White-Blue 'Tron sideboarded and shows Chalice of the Void and Vendilion Clique buying precious turns against a couple of different Extended combo decks:

While 'Tron's remaining half-nature as a big-mana deck affords it the fabulous threat base we described, its mana is also a potential weak spot. There may be no juicier Molten Rain target in Extended than Urza's Tower ... and when the guy who invented All-In Red crammed all those Blood Moons and Magus of the Moons into the starting 60, he was salivating at the thought of a mana base with maybe one basic land. Yes, 'Tron does supplement colored mana and acceleration with Chrome Mox and Azorius Signet, but it would be foolish to discount that potential Achilles heel.

Like Storm, 'Tron benefits at least somewhat from the dominance of Faerie Wizards in Extended. While the little blue guys are by no means a bye, 'Tron's extremely expensive spells are outside of Spellstutter Sprite's easy grasp (and Cryptic Command is not yet a four-of staple in Extended Faeries decks); that said, Glen Elendra Archmage is superb against this creature-poor strategy, and the rise in that spell might make for a sticky matchup where once there was a clear path.

But the itchiest patch of skin on the 'Tron deck's back has got to be Gaddock Teeg. This little troublemaker is a particular thorn in the 'Tron deck's side. You see, 'Tron has all of these super-expensive noncreature spells, such as Mindslaver, Decree of Justice, and even Gifts Ungiven—all nixed. Even the previous 'Tron anti-creature slot of Repeal was locked out ... and you certainly can't Wrath of God out of this problem

As a result, many 'Tron players have gone with Oblivion Ring as a one-for-one option that can slide under Teeg's four-mana ceiling; this deck is no exception, but it would not be out of the realm of possibility to see Path to Exile in the near future (and coming the other way, this deck has already got at least one basic Plains!).

With that said, I think that there are two new Conflux cards that can improve the already imminently viable White-Blue 'Tron deck in Extended:

Now on the subject of Dragon-sized threats, I want to leave you with a final White-Blue 'Tron video, this time focusing on the deck's fabulous offense. Remember: 'Tron features dramatic threats due to its massive mana generation ability, rivaling combo decks while still sitting essentially in the control neck of the metagame woods. Versions like this one will typically kill the opponent with ... 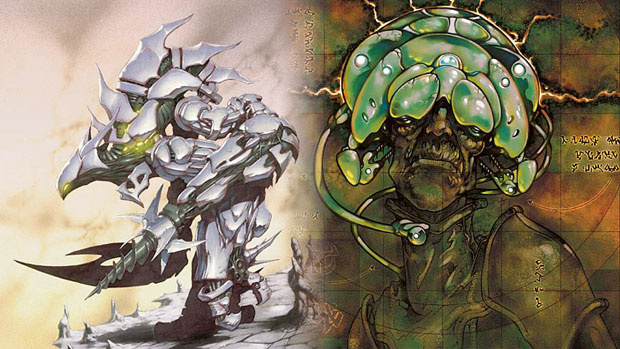