Do You Know the Mushroom Man?

f all the ways to play Magic, it's Commander that best lends itself to using champions. While Dragon's Maze comes packed with ten unique heroes from the guilds of Ravnica, Magic's broader history of legendary creatures gives us more than five hundred to pick from. Adding a few more is statistically unlikely to be exciting.

It's a good thing that isn't the case. Those of you who followed along with the PAX East panel will already be familiar with Ruric Thar, the Unbowed. The hero of the Gruul is impressive, to say the least. (Pro Tip: Keeping your eye on the Dragon's Maze Card Image Gallery will highlight any other champions that have come through.) Today, we have the pleasure of meeting another new option for heading up a Commander deck.

Meet the champion of the Golgari: Varolz, the Scar-Striped. 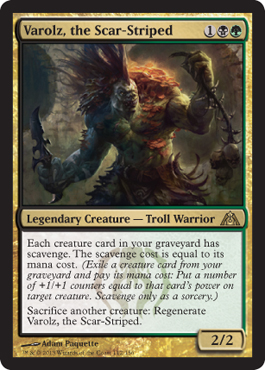 Back mushrooms are the least of your problems when facing down this guy.

Varolz, the Scar-Striped is unique among the denizens that are Golgari. When scavenge was featured in Return to Ravnica I wondered if there was a way to give all your creatures the ability to be recycled similarly.

Varolz is that way. Placing +1/+1 counters on creatures is among my favorite things to do in Magic, and I know I'm not alone. The potential of turning any creature in your graveyard into food for your troops is the most Golgari method of war imaginable, and it's easy to list a few creatures that fit into this plan nicely.

Force of Savagery was the first thing that came to mind seeing Varolz. While the Future Sight rare is usually tricky to have as a creature in play, Varolz flips the dynamic by letting you appreciate the way it puts itself into the graveyard immediately. With a scavenge cost of

, for a total investment of

, adding eight +1/+1 counters to a creature is potent. (Compare this to Increasing Savagery's effect.)

While bloodrush is today's way of using a creature card for a spell-like effect, the Saviors of Kamigawa standout Arashi, the Sky Asunder offers a provocative combination with Varolz: channel Arashi to wipe away pesky Demons, Dragons, Angels, and other opponents' aviary forces, then get five counters for five mana.

Going wider, there are plenty of creatures that offer an ability but end up in the graveyard as a result. I enjoy several that find mana:

Krosan Tusker is among my favorites in this list, both finding mana and drawing a card early in the game but giving a substantial +1/+1 counter option later—the ideal complement for Varolz.

Throwing +1/+1 counters around by scavenging creatures in the graveyard is something other cards can get behind as well. Corpsejack Menace was the Return to Ravnica Prerelease card for the Golgari, and its time to shine (if you didn't find one earlier) is here with Varolz. Others include the duo of Jarad's Orders and Corpse Connoisseur, which find something you specifically want to scavenge, and Fauna Shaman can exchange one in your hand for one you want to cast (leaving the former in the graveyard). Two more stand out above the others: Skullbriar, the Walking Grave and Jarad, Golgari Lich Lord.

Skullbriar is an obvious place to place +1/+1 counters, as it doesn't matter what your opponents do to it, the Walking Grave will keep the bounty of recycled creatures with him. Jarad, Golgari Lich Lord plays along by giving you a way to dish out serious damage with a creature loaded up with +1/+1 counters (like, say, Skullbriar). They also each serve as a backup commander choice if you'd want some variety in a deck.

All of these options work well with just Varolz's first ability. He comes with another.

While regeneration is useful in the most recent era of Magic, Commander's reach through history contains plenty of removal cards that ignore regeneration (Wrath of God and friends). What makes it exciting for me here isn't the regeneration. The ability to put any creature you control into your graveyard is handy (to say the least) when it gets an ability that works there.

There are tons of creatures that give us a spell-like ability when they enter the battlefield. Uktabi Orangutan is one of many that can destroy something annoying, then happily serve as regeneration-into-scavenge fodder.

Both evoke and echo work as ways to treat creatures as spells, and since we want to both get the spell and the +1/+1 counters quickly we may not necessarily want traditional baddies of destruction like Woodfall Primus and Sylvan Primordial, although they'll still work as desired.

Having ways to sacrifice creatures on demand turns already strong cards like Butcher of Malakir (and Grave Pact) into powerhouses. Cranking things to 11 is always a treat:

You can see where this is going, and it's good for Varolz. It gets even better when you layer in effects that care about putting opponents' creatures into the bin.

I don't know what it is about Slum Reaper, but it's a card I just get a kick out of using. Varolz likes it, too, since we can pay for the sacrifice trigger with itself, putting potentially four +1/+1 counters for

into the graveyard along the way.

Of course, we may not want to sacrifice an actual creature card. Creating a few tokens to use instead is a handy tool to have, and making tokens from creatures that are efficient to use as scavenge material later works well.

Both of Varolz, the Scar-Striped's abilities play well with each other and can easily fill a deck with choices. But what does a Varolz deck look like? Creatures. The overriding theme of what Varolz asks for is creatures, and if you pile a deck with creatures, a few other cards would want to come along the ride.

Lurking Predators is a standout card from Magic 2010. It both neatly pads our creature count while helping us keep pace with active opponents. Since Varolz cares about having creatures to sacrifice, and getting creatures into the graveyard, putting them onto the battlefield directly is among the best ways to accomplish both.

Caring about plenty of creatures isn't exclusive to Lurking Predators:

Of course, caring about creatures can be done in other ways:

While exercising our option to scavenge is appealing, having a backup plan of attacking en masse with Craterhoof Behemoth or a creature that wants to see a full graveyard gives us the flexibility to play differently. If your opponents plan to wait until Varolz is mucking about the battlefield, you can take them by surprise instead.

In a different way, there are several strong creatures in their own right that will gladly work with Varolz.

All three of these are efficient from a scavenge perspective, but they come with other abilities as well. Yeva makes half your deck instantly faster, while the Colossus and Spiritmonger become fatties far too quickly for most opponents to handle.

It's also worth noting that black-green traditionally has access to powerful noncreature spells as well:

Clearing out annoying armies of tokens, problematic Planeswalkers, and other permanents, or emptying an opposing graveyard (since it's such a good plan it's common to see it at work) are staples of the black-green connection. We shouldn't ignore tradition.

So what do we do with all these cards?

Nothing. At least nothing just yet.

Since we fired up the feedback machine in last week's introduction to Commander Tower, we weren't able to rally together to compile what cards we might put with Varolz. We have the chance now. 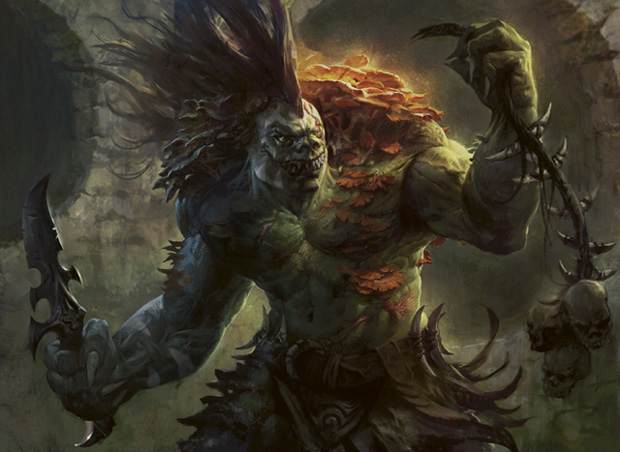 Throughout today's article, I've broken out several options to consider for Varolz, the Scar-Striped:

Everything I shared is just the tip of potential, and only what I can see myself. I want to know what you see, and why. This round of feedback is another special delivery. To review the rules for sending in feedback:

This means you'll answer the prompt (see below) following tightly to the rules above. Does this also mean I throw out any emails that are 101 words and longer? Of course not. I'm just being clear that I won't read, or cite from, any walls of text. I need you to be as brief and clear as possible because I need to read and understand as many of you as possible.

Without working together, neither of us will be happy with the results. (Although the first wave of feedback from last week's prompt is already awesome, so most of you are doing great! Keep it up!)

This week's prompt is all about Varolz: Which six cards would you absolutely include in a Varolz, the Scar-Striped deck if you were building it?

Your list might be all cards already shared today, an entirely different set of cards, or a mix between the two. Whatever the case, we'll pull together a complete Varolz deck to try out in a couple weeks.

To everyone who sent feedback last week, thank you. I'm looking forward to showing you just how powerful it can be when we show off how community-built ideas are the most potent. See you then!