lease don't read this article if you are planning to play Jund at Nationals Qualifiers this weekend. The rest of us would really appreciate if you looked the other way and all that.

Is that Jund ... with Plated Geopede? 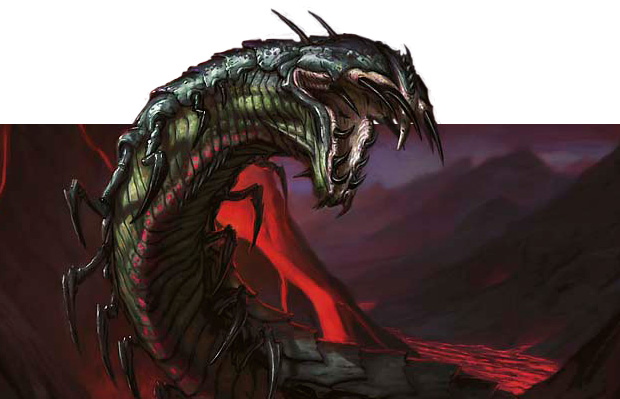 John Pham has taken the "all lands, no removal" route to a, heretofore, unexplored dark corner of the room. His removal is so light that he has done something that (almost?) no other Jund deck we have ever seen has dared to do ... cut main deck Lightning Bolts! While Pham's deck plays "only" 26 lands, the two s kind of make up for it.

So, what is so crazy different about this deck?

Many Jund decks—especially as Jund became more and more popular, necessitating preparation for the mirror match—moved away from Putrid Leech. Putrid Leech is basically the one card that most puts control players (that is, not just classic control decks, but many times Jund's opponents are forced into taking the role of "control") on their heels. However, when you are just running up against a Sprouting Thrinax with it, Putrid Leech is much less exciting.

Pham put the Leeches back in his deck and added another fearsome offensive two drop: The aforementioned Plated Geopede. The Geopede not only doubles Pham's opportunities to play aggressively and proactively the first couple of turns, he actually changes how—or even if—the opponent can play his spells (even anti-Jund spells!).

Look at all those glorious disappearing lands!

Pham is in the "all lands ... " camp with 26, but of those, four Evolving Wilds and a Scalding Tarn really change the opponent's ability to interact in the first two turns. Scalding Tarns? What the!?! Today, the opponent will often read "Red-White-Blue Planeswalker deck" on seeing one left unbroken. And if you play a turn two Geopede (especially cleverly) ... An opponent might start mentally preparing for Boros. Any lapse of concentration can distract an opponent from the important "know what I am going to discard to Blightning" mindset. An opponent facing down a pair of Mountains (or something really goofy like a Mountain and an Island) might not realize you are playing a Jund deck! Such a player might play a land haphazardly, that would be better left back, or go into auto-pilot—tragically—when that Blightning hits.

Remember when I said I didn't want Jund players reading this? That is because the only thing keeping back that red, black, and green tidal wave of meta-game is Spreading Seas.

The other thing that makes these fetch lands so sexy is that they can invalidate Spreading Seas. The Verdant Catacombs draw was always good while on the draw; adding the next five just more than doubles the Jund deck's opportunity to "get lucky" against a fast Spreading Seas draw that might otherwise turn a Jund-ish land into an Island.

Speaking of "Island", this deck can go Sedraxis Specter after sideboarding ... Basically a nightmare for control decks and nice Blightning insurance. All-in-all, exactly the Jund deck you don't want to see while playing control.

Why do you not want to play against this deck? It invalidates, in many ways, the approach you would typically take to tackle Jund. Multiple Spreading Seas hand? That's supposed to be good! Sometimes none of your Spreading Seas will hit on curve; other times they will set up the opponent's Specter.

It's not like Pham was able to do all this for free—his deck has no Broodmate Dragons, for instance—but I think that this deck does a good job of getting an "I have weird cards" rogue advantage. A lot of the time so-called "rogue" deck designers believe they will get an advantage by playing unexpected cards in their unexpected decks, but they just end up playing diluted versions of their own stock strategies.

But playing staples—even other decks' staples—in the most expected deck is a different story. It's not every day that the most highly played archetype, maybe in history, can masquerade as Red Deck Wins, dodge the card specifically chosen to outmaneuver it, and threaten like Grixis Burn in a Game 2 situation.

Hopefully you've stopped reading by now, but if you haven't, just click the back button, particularly if you intend to go Red Deck Wins.

Can you pick the cards that matter out of this stack of 75?

Is that what makes it special?

There are some cool new cards like Staggershock, and Unstable Footing, the latter of which is cute for fighting Kor Firewalker.

But none of these cards are the cards that matter.

Among the flavors of Red Deck Wins, the most scary card of all is Manabarbs. 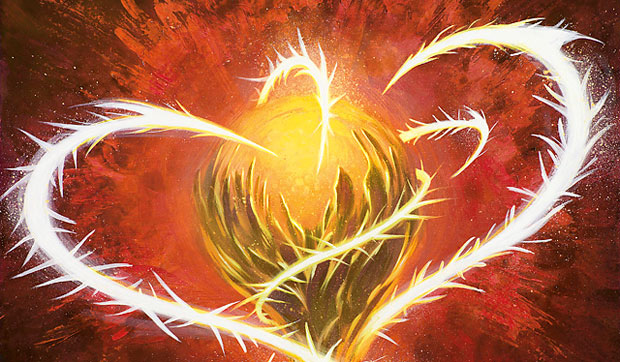 Manabarbs is the card red decks can play when they absolutely, positively, want to beat white decks. In my own Pro Tour Qualifier experience, I was at 12 when my opponent tapped for a Manabarbs with three cards in hand. I tapped five for a Baneslayer Angel; it's like they say, just dies to Doom Blade. I didn't really have any way to kill the Manabarbs in my deck, and waiting around was just going to get me killed; so I made the only play I could and just tapped for the next one. That time it was Lightning Bolt ... to my face, that is. Any white decks that are cheating on Celestial Purge might want to reconsider. Not only is it one of the best spells against Putrid Leech and Sprouting Thrinax, it can get rid of Manabarbs, often without costing you a single life point. Thanks for letting us float mana, The Stack!

If you are playing a Red Deck Wins variant—whichever kind—you should probably consider playing this card.

You can actually look at this one ... in fact, how can you look away?

We spent the first part of last week's Top Decks talking about Phil Napoli's White-Blue Control win in New York. It was over Chris Lachmann that Phil took his Blue Envelope, with the one-time PT Champion, Sliver Kid, piloting basically the most exciting possible deck.

This deck is like an aggro-Spread 'Em deck, but with much higher card quality (replacing the lockdown of Convincing Mirage with the future All-Star, Wall of Omens), and peppering powerhouse planeswalkers and fabulous beaters throughout.

What could be better than Rhox War Monk dancing hoof-in-wing with Baneslayer Angel in a veritable luau of lifelink? How about a 4/5 Rhox War Monk setting her up? Ardent Plea mana-screws the opponent at the same time!

The Ardent Pleas in this deck can be used to bend draws to match the offense of any opponent. Against red decks, narrowing draws into Kor Firewalker is superb ... giving the deck time and room to set up the War Monks and Baneslayer Angels.

Against control decks, you can aim into Trace of Abundance, or just play it on turn two to set up the third turn Bloodbraid Elf or planeswalker. Why is Trace of Abundance all of a sudden good enough for sideboard play? The answer:

It is often more dramatic on a Raging Ravine (which gets bigger and bigger with each swing, big enough to bowl over a Baneslayer Angel), but Celestial Colonnade is serviceable, too. Trace of Abundance on a man land makes it very difficult to deal with them via Tectonic Edge, point removal like Terminate or Path to Exile ... basically, hell for control decks (who have serious problems killing man lands with their sorceries).

This one you really should look at:

4 Negate 1 Into the Roil

If you haven't read Brian David-Marshall's write-up on Kenji Tsumura's comeback to Magic, you should (right after you finish this Top Decks)!

The one-time Player of the Year battled back with this grinding, combo-control deck. 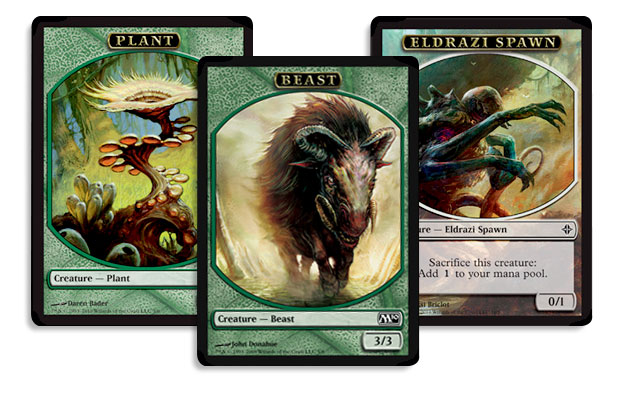 The objective is to get one of the many token generators (Khalni Garden, Awakening Zone, even Garruk Wildspeaker in a pinch) online, and then point a Polymorph at a token creature. The deck's only creature cards are Emrakul, the Aeons Torn and Iona, Shield of Emeria, so whichever one you get will usually take over the game. 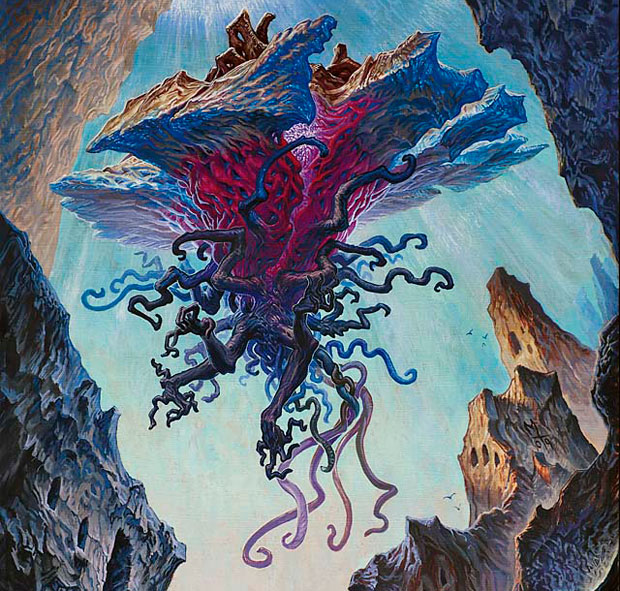 Emrakul, the Aeons Torn off a Polymorph is not going to Time Walk when it comes into play, but it is still very durable (especially with Negate backup) ... And annihilator 6 combined with evasion and fifteen power will many times force a concession on the spot. 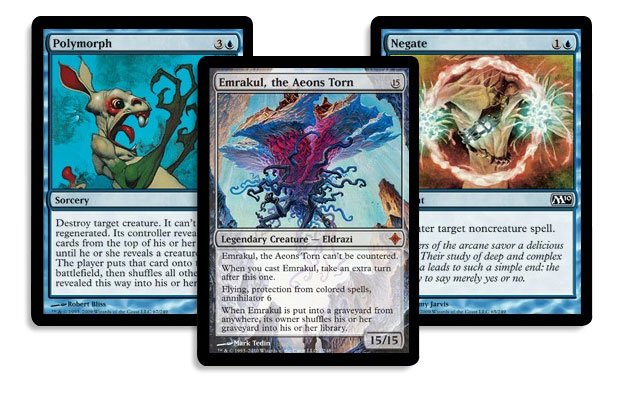 The Polymorph deck can protect itself (and its combination) with Negate and other counterspells, or chump block indefinitely with Awakening Zone. It therefore has a lot more room to play than other combo decks. Heck, you might play a third turn Jace, the Mind Sculptor off a Rampant Growth and just lock down an opponent, white-blue permission style.

This weekend is National Qualifiers in the United States, and the format is—unsurprisingly—Standard.

This week we looked at some of the most threatening things that you might encounter the day after tomorrow.

Jund decks that attack twice as fast, with mana bases resistant to Spreading Seas; Red Decks with—for once—the high card (and half the mana of many other decks' equivalents); and a combo deck. All of these are fierce moving forward, all are capable of dictating the field of battle.

One thing that was missing from Chris Lachmann's sideboard that was played in many similar builds was this ... also quite capable of dictating the terms of the game:

This is basically the most amazing thing you can play the turn after a White-Blue Control deck taps for its Mind Spring.

Good luck this weekend! (Unless you are playing me, of course.)