elcome back to Perilous Research, DailyMTG.com's exclusive Magic Online column. This week, we're going to be taking a look at the decks that are performing well in Return to Ravnica Block Constructed Daily and Premier Events on Magic Online. Last time we visited the Block Constructed format was prior to Pro Tour Dragon's Maze. Since then, the format has shaken off the weakest links and we've been given a clear picture of the where things are headed. 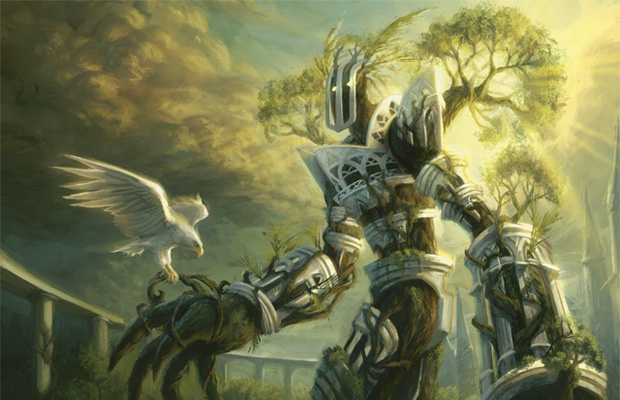 Block Constructed is one of the most popular Constructed formats on Magic Online. The desired cards are usually easy to acquire, while the tournaments themselves are in enough demand to keep the queues firing. I enjoy Block Constructed and feel that it gives me a leg up on the competition for the coming Standard season. For example, with the release of Return to Ravnica last fall, there was a reasonably long period where the Standard format was in flux. During this time period, the Jund decks that had performed above and beyond in Innistrad Block Constructed tournaments were able to establish themselves as a major format contender. Even now, many months later, the Jund deck from Innistrad Block Constructed has simply improved its mana base and upgraded some removal spells and it's still sitting in tier one territory.

One might expect to venture into the world of Return to Ravnica Block Constructed to only run into decks that Top 8ed the Pro Tour. Fortunately, that's not how things work on Magic Online. Pro Tour Dragon's Maze helped establish a metagame for the format. Once there's an established metagame, you can count on the sharks of Magic Online to tear the existing decks to shreds. Let's take a look at some decklists and have a discussion about the format's current makeup, and the direction we expect things to go.


The first deck I'd like to talk about is Selesnya. There seem to be two versions performing reasonably well at this point in time: the Selesnya deck that earned Craig Wescoe a Pro Tour title, with its aggressive draws, and the more midrange Selesnya decks like the one that Ali Aintrazi and friends played in San Diego. That latter version preys on the more aggressive decks in the format and maintains a surprising amount of game against the control decks. I expect green-white decks to oscillate in the direction of the midrange deck in the coming weeks. Control decks are waning in popularity at the moment and you want to maximize your chances in grindy creature mirrors where cards like Trostani, Selesnya's Voice; Scion of Vitu-Ghazi; and more token production are at their strongest. It's worth noting that TARSC has 4–0ed three different Magic Online Daily Events in the last two weeks with the midrange version of the deck.


The next deck I'd like to take a look at is Esper Midrange. This deck has been popular since before Pro Tour Dragon's Maze but players were given a boost of confidence and a solid decklist to work off when Makihito Mihara Top 8ed the Pro Tour with the archetype. This deck is all about value and trump cards. Pilots of the Esper Midrange deck aim to trade one for one with their opponents early on so the game can get dragged to a place where Ætherling, Blood Baron of Vizkopa, or Sphinx's Revelation can close the deal and secure victory. I expect Precinct Captain versions of Esper to perform reasonably well as the format continues to take shape. However, the deck may start to wane in power level if players adapt their strategies to handle this one most efficiently through aggression. Fortunately for Esper players, I think the format is moving toward the middle right now.


There's no better answer to a format that's becoming increasingly midrange than Maze's End Control. The deck can devote literally a full 100% of its slots to interactive cards that prevent the opponent from winning. While using spells efficiently, the deck can use excess mana to activate Maze's End and search up Gates that will eventually win the game. Some argue that a strategy like this can be dangerous. Sure, if some of your Gates happen to be discarded or removed from your deck then you've just lost your only win condition short of Jace, Architect of Thought's ultimate ability. The deck can never truly be tier one because players can just play a few cards in their sideboards and rarely lose here. I don't, however, foresee many players putting a bull's-eye on this archetype's forehead.


A lot of readers questioned my judgment when I said that Red strategies were falling into obscurity the last time I talked about Block Constructed. Now, it's rare to see a Red deck even in 3–1 territory when looking through Daily Event Results. The Red deck is consistent and capable of winning any matchup when the opponent stumbles, but that's not really good enough anymore. Loxodon Smiter and Voice of Resurgence are actual nightmares for the Red deck and just about every deck in the format now has something that says "gain life" somewhere in the seventy-five. Red decks will continue to see some play because of card availability, but I don't expect Red decks to have a ninth-inning rally in Return to Ravnica Block Constructed.


There's a new kid on the block! Butakov is at it again with an innovative Bant deck. The deck has already scored Butakov a Top 4 Premier Event finish and a 4–0 Daily Event finish. I expect Bant tempo strategies that utilize the underplayed Lyev Skyknight to become a major contender in the coming weeks. This deck hits the ground running with the best one-drop in the format, Experiment One. The deck has access to the format's strongest two-mana spells in Selesnya Charm, Call of the Conclave, and Voice of Resurgence. Things start getting big in the three-mana range with Lyev Skyknight and Loxodon Smiter. Things top out at four mana with Advent of the Wurm, the format's best four-drop. The deck can fight a long game by pressing its early advantage and populating with Vitu-Ghazi Guildmage. This seems like the type of deck that could really take over a Block Constructed format. It has all the early aggression and protection necessary to compete with the control decks and many of its cards are naturally strong against the aggressive decks. I'm sure Butakov is two steps ahead of me by the time this is published, but I think a single main-deck Cyclonic Rift could be a nice improvement for the deck.

Next week, I'll be back with more adventures in the world of Magic Online. Be sure to join me as I take a look at the latest top dogs of every format's Magic Online metagame!