his week's update is going to take two different looks at one shiny new format. On the one hand about 1,800 players battled with M11 cards in North American Pro Tour Qualifiers this past weekend. Regarding those, we have some decidedly diverse results.

Plus, a look at the decks deck that is tearing up M11 Standard at the National Championships level. Get ready to dust off those Titans! (Maybe even Frost Titans!) 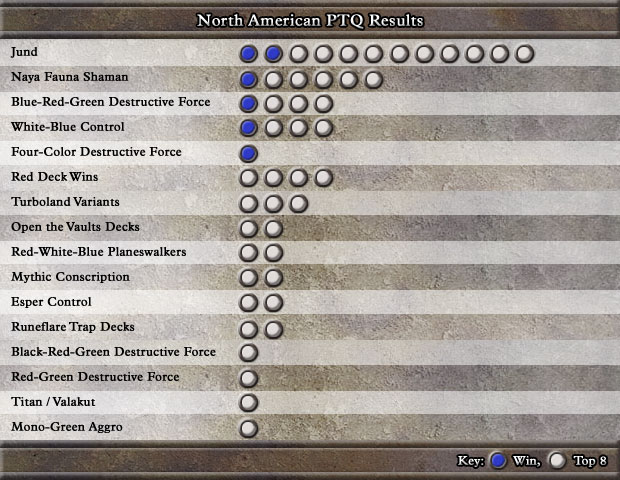 Well, it looks like we don't exactly have a new best deck or anything; Jund occupied 25% of total Top 8 appearances and burgled twice the Blue Envelopes of the next-best deck (which, to be fair, was only two compared to the "ones" brought home by various other decks). Though 25% Top 8 representation might actually be an improvement against numbers from earlier this year. 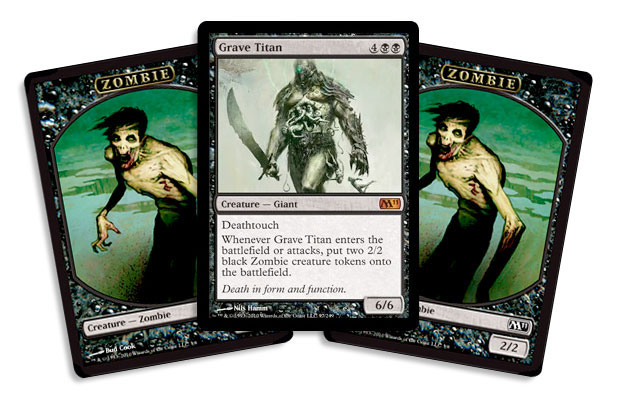 Lee's deck features a trio of Grave Titans where we might expect to see Broodmate Dragon or Siege-Gang Commander. Grave Titan makes more power than Broodmate Dragon, and across more bodies. Attacking once gives you 14 power over five bodies. Don't forget that this is a black creature; you know, more-or-less unkillable.

Siu's deck lacked any M11 cards; though he did play Sarkhan the Mad (I would like to see that planeswalker teaming up with the veritable token-geyser Grave Titan), itself sometimes a stand-in for Broodmate Dragon. The one thing I would point out is Slave of Bolas out of Siu's sideboard ... a superb anti-Titan measure! You get their Titan for 6+ damage, whatever bonus the Titan generates (two lands, two creatures, whatever), and you get to kill what is probably the most dangerous creature on the table ... to death.

Primeval Titan and Destructive Force were made for each other like chocolate and peanut butter. Basically you can ramp out Primeval Titan and then immediately go and get two additional lands. These can be functional lands like Mystifying Maze or creature lands for bashing or even garbage lands you intend to throw away the next turn.

Now you are already up to eight mana! Destructive Force only costs seven. You should already have an edge when the Force goes off, but with just one more Primeval Titan attack, you should be three lands or so ahead of the game. Great, right? Right.

Kendrick's main is quite similar to the Blue-Red-Green Destructive Force deck we looked at last week, complete with the post-Force (or Titan-trump) lockdown, Frost Titan. Frost Titan lacks the natural synergy with Destructive Force, but because it can lock down a land post-Force, the red-headed stepchild of the Titan cycle can keep the opponent from recovering; subtly, it is also the best Titan against other Titans.

And this is what you get when you add a Plains!

White of course gives you the second offensive option of picking up Stirring Wildwood in addition to Raging Ravine for more and more creature-land beatdown. However the real strategic improvement comes from the mighty Ajani Vengeant. Great against pure beatdown, even better against control, and quite at home locking down a land in a mana denial strategy, Ajani Vengeant gives a deck with Rampant Growth and Explore another mythic planeswalker to lay out there on the third turn (and in this deck, quite possibly, a more effective option). Ajani has always been the most dangerous planeswalker for White-Blue decks to face early, and in this deck, the mana denial can help force through the more dramatic mana denial of Destructive Force. Plus, post-Force, it's basically a Frost Titan (that doesn't, you know, hit for 6).

This deck is a fine integration of a format-defining new card into an existing, already excellent, shell. 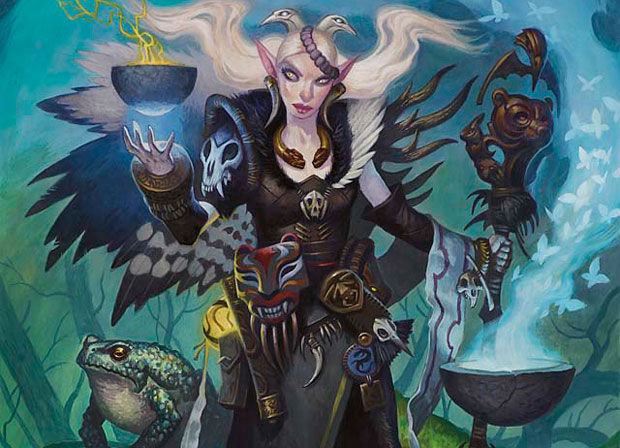 Fauna Shaman may be M11's single greatest threat presented to the already dominating White-Blue decks. Coming down on the second turn, it is not only an aggressive Bear (not that anyone would Grizzly or Runeclaw their way across the Red Zone on the third turn under most circumstances), but a card advantage engine. Unchecked, Fauna Shaman is going to fetch (and pitch) Vengevines. Straight to the graveyard. You can get more and more Vengevines for more and more card advantage out of the graveyard (and more and more immediate—hasty—damage). Plus, Vengevine can come out in style! You can go and get Bloodbraid Elf ... which in this deck flips all but a few cards for immediate Vengevine re-buy-ness.

Now this isn't just a Vengevine deck. In addition, Fauna Shaman can play the Worldly Tutor role and grab singletons. For instance—the second you have an advantage, or the opponent foolishly taps out—you go and get Realm Razer. The Realm? Consider it Razed. This can be a good play in response to a Day of Judgment-type effect, or even the opponent tapping for an expensive planeswalker. Let's see how clever this blue mage is without any lands!

As a lead-in to our next section, let's finish the week's Pro Tour Qualifier winners with a man who has some success on the Pro Tour itself: Craig Wescoe.

By and large, Craig's PTQ-winning deck lacks anything big from M11. Yes, he ran only two copies of Path to Exile ... but made up for it with Condemn.

A lack of M11 is not going to be a problem for the next crop.

But before we get to some more recent National Championships winners, let's take a moment to tip our collective beanies and fedoras to Finland National Champion Jani Lindroos whose main is two Deprives, an Everflowing Chalice, one Baneslayer Angel—and, shockingly, four Mana Leaks—different from Wescoe's deck.

2 Back to Nature 2 Acidic Slime 1 Elixir of Immortality

Witton's win in Australia was the slight, 28-land, 75-card barrier between White-Blue and a clean sweep of National titles over the past couple of weeks!

Okay, back to White-Blue decks ...

Jay—who some eleven years ago was a member of arguably the most impressive Top 8 in Pro Tour history, including Pro Tour Champions Brian Kibler and Dr. Mike Pustilnik, plus Hall of Famers Zvi Mowshowitz, Kamiel Cornelissen, Rob Dougherty, Kai Budde, and Jon Finkel (all five of whom are also Pro Tour Champions)—added a gold star to his resume with this Canadian Nationals win.

Might raise an eyebrow: the counts on those Jace planeswalkers.

Jace Beleren makes quite a bit of sense in this deck. While Jace Beleren is the faster Jace in any Jace fight, it makes for a particularly attractive threat in a deck with Sun Titan. To wit:

Now, often you will be loathe to spend the last counter on your Jace, and actually deign to help the opponent draw a card ... but when you have Sun Titan, turn six goes like this: 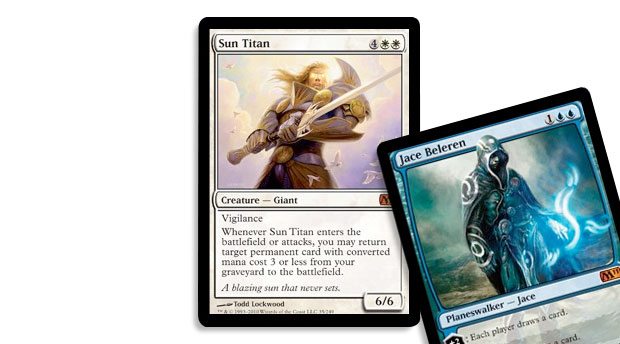 Besides a (possible) switchover in the finishers department, the most important feature change in the already quite serviceable White-Blue archetype is the popularity of permission.

Wescoe played just the four Mana Leaks, actually up from Lindroos's two Deprives. Either two or four is, of course, up from the status quo of no permission spells at all.

Parez glued the two Deprives to the four Mana Leaks, moving up to six. Elarar went all the way to eight, adding three Essence Scatters and a Negate as his split.

Every mage added counterspells of some stripe to his sideboard. 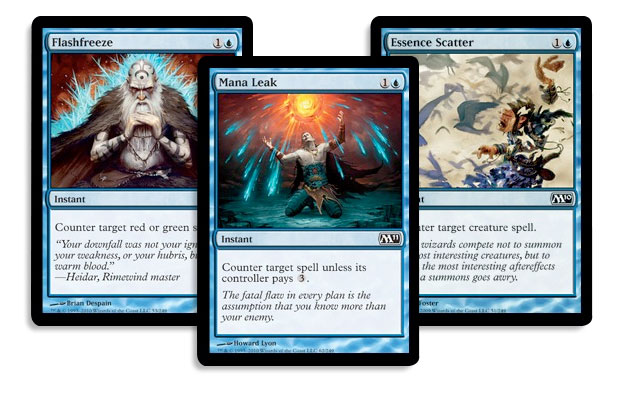 Here's the thing: Once you start adding Mana Leak to the mix, counterspells start getting cool. You don't necessarily want to play them without a flexible counter (Flashfreeze isn't very good against Vampires, Essence Scatter is just one of the cards you are going to end up pitching to Blightning, whereas Negate isn't going to save you from any of the format's awesome creatures), but once you have one, it might make sense to start building redundancy into your deck list. Heck, Wafo-Tapa had nine, including a much-maligned Cancel!

With all of those counterspells, we might just see a return to instant speed removal (under the theory that it's worth leaving your mana open); both Wafo-Tapa and Pierron played Jace's Ingenuity, and while both players ran three copies of the Sun Titan-friendly Jace Beleren, Pierron did so over even a third copy of Jace, the Mind Sculptor.

Notice how all these Sun Titan decks are running at least one Scalding Tarn for the value; that way, if there is no available Jace Beleren or Oblivion Ring for the re-buy, Sun Titan always has something to do (other than smashing and bashing, that is).