f you ask most people about Andrew Cuneo and Ordered Migration, they will tell you a story from the Master's Gateway at Pro Tour-Chicago 2000 (Kai's Rebels), a story dubbed Cuneo's Honor. Andrew, trying to go the distance with his last Ordered Migration token, was up against a wall, facing his opponent's Benalish Trapper and Rith, the Awakener. The Trapper moved to tap that last token so that Rith could get in to set up an insurmountable board position, but...

This was a mistake that would likely cost Andrew's opponent the game and the round.

Then, to the surprise of the surrounding crowd, Cuneo did the unheard-of and handed his opponent the take-back, and with it, essentially the game win. Andrew didn't want to win the game because his opponent was confused by the tapped-ness (or non-tapped-ness) of his token.

Well, nice guys don't always finish last (not this time at least), and Andrew went on to win the deciding third game anyway, and battled all the way through the Gateway's maze of single-elimination competition to make his Master's appearance, eventually falling in Master's proper to Grand Prix Top 8 machine Alex Shvartsman.

Andrew designed an Invasion Block deck that both controlled the board and won the game with that block's efficient token generation spells. Ordered Migration was a "5/5 flyer" for five; Rith's Charm "a 3/3 for three"... Efficient both. He could control the pace of the game with tokens blocking both on the ground and in the air, and milk time to set up his profoundly overwhelming spells like Allied Strategies and Legacy Weapon. Andrew's deck was a very engaging Domain variant, but was overshadowed in the format at the time by this guy Budde and his Grand Prix win with a different Domain deck.

For seven or eight years, Andrew's was probably the only competitive deck ever to play Rith's Charm.

Last Extended season, I made an attempt to unearth his best-kept secret, and inspired by my friend Pat Chapin's acrobatics with Spinerock Knoll at the 2007 World Championships, tried to find something productive to do with hideaway lands. Keep in mind that the deck I decided to work with was based on Onslaught style White Control (you know, Akroma's Vengeance and Decree of Justice) and Proclamation of Rebirth/ Martyr of Sands. This is the draw I showed my Round 8 opponent (playing for Top 8):

No, you never saw the deck in a past edition of Swimming With Sharks Top Decks; I unfortunately managed to lose the next two games (Profane Command being new, I wasn't used to playing against Fireball out of The Rock), so the roar of the crowd for that one aggressive sequence (out of my Onslaught Block mono-white-style Martyr of Sands deck... With Rith's Charm) was going to have to be enough of a pat on the back.

Of course nowadays, every competitive player knows just what you can do with a Windbrisk Heights, especially when paired with a three mana spell that can produce three tokens. Spectral Procession was a defining staple of Lorwyn / Shadowmoor Block Constructed, most notably in the "Mirror Master" Kithkin deck, which was more-or-less the second-best deck of the format. Even without Windbrisk Heights, Spectral Procession was a tremendous threat that duct taped evasion onto card advantage onto an efficient power-to-mana cost ratio. The red decks had to splash green for the top side of Firespout or black to run Soul Snuffers because those three little 1/1s could be so troublesome.

Rith's Charm... Spectral Procession... You already know how dangerous these three-mana spells that produce three little critters can be. Three power for three mana is considered pretty efficient on the creature side, but when you split that three power between multiple smaller creatures, you are rewarded with better blocking options, maybe a little card advantage. Like Andrew, you can swing with some and leave others back. When you are up against little creatures, you can create troublesome trades for your opponent. Removal spells start to look a lot less impressive. You can control both time and the board as you draw into your mid-game plan.

So what happens when you have one of those ordinary, pretty efficient three-power creatures, then staple three tokens onto it, all for the original three mana? 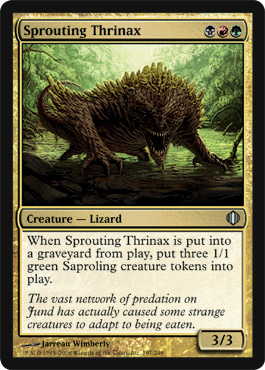 So what's great about Sprouting Thrinax?

Sprouting Thrinax is a dangerous creature both offensively and defensively. On the play, you can start off with a Birds of Paradise, and then go to town on the second-turn 3/3, peer to some of the faster Elves draws with Wren's Run Vanquisher. Birds or Elves into Call of the Herd has always been good enough for Standard and even Extended, and Birds into Sprouting Thrinax might actually be better; the second "3/3" doesn't cost you any mana.

However, defensively Sprouting Thrinax might be even more impressive. Say the opponent has a fast Vanquisher draw. Their 3/3 can go to the Red Zone... But what about a trade? It's a terrible trade for the player with Vanquisher; Sprouting Thrinax can buy you a lot of time as the opponent wonders what the best play should be. You can be thinking about what you're going to trump with come turn five or six, whereas they're going to be wondering about all those life points they haven't stolen.

Sprouting Thrinax laughs off removal spells. It is in the perfect colors to team up with persist creatures like Safehold Elite, Kitchen Finks, and Murderous Redcap to produce a deck that is essentially immune to removal spells (you know, like echinacea). Adding a removal-resistant strain to The Rock's makeup can help a deck focused on the middle turns to be even more dominating at what that deck is already best at accomplishing. Not only will common "solutions" like Firespout and Wrath of God largely lose their teeth in-matchup, but tweaking the creature makeup a half-turn can also improve a deck's ability to profit from trading. The Red Zone will devolve into mud; control decks might curse their ability to deal with particular creatures, but beatdown opponents will actually be pulling their hair out.

Or if you prefer, you can combine this creature with Bitterblossom, Marsh Flitter, and Furystoke Giant (or Torrent of Souls) to add a little green flava to the Tokens side. Tokens has been an impressive strategy in both Standard and Block, but Sprouting Thrinax might be able to give it more board presence in the early game now that Mogg War Marshal is leaving Standard. Just imagine combining Sprouting Thrinax with a Tokens staple like Nantuko Husk. Ka-blammo! It will be like Ghost Husk all over again as you send Nantuko Husk from 2 to 10 in the blink of three mana... Not a bad addition to a strategy that is already chock full of dangerous interactions!

In the context of Shards of Alara, Sprouting Thrinax is absolutely delicious. This Lizard comes from the shard of Jund, and we all know what that means... Don't we? Not yet? Believe me, certain denizens of Jund will find Sprouting Thrinax a delectable teammate two or even four times over. But for now...

Jund is the black, green, and red shard; if we were (still) speaking in terms of the Invasion color scheme, Jund would be best friends with Darigaaz, the Igniter. While Sprouting Thrinax is undoubtedly a creature of some potential, three different colors on the third turn is still a challenging cast. But fear not! Today my colleague (and Sliver Kid) Jacob Van Lunen is previewing some of the exciting new "three color" lands from Shards of Alara. You can bet that Jund will have multi-lands in the upcoming set, in order to accommodate difficult color combinations, such as the three disparate types of mana in the top-right corner of Sprouting Thrinax.

But even without more multi-lands, the format is rich with lands that can help produce Sprouting Thrinax quickly, and potentially under pressure. First and foremost, this creature is green. That means that a first turn Birds of Paradise or Llanowar Elves (specifically off a Karplusan Forest or other in-color multi-land) can lead to a mean Sprouting Thrinax on the second turn. Of course the card can piggyback on Lorwyn/ Shadowmoor mana tricks, though... There is no reason why this creature can't play on the same team with Vivid lands and Reflecting Pool like Quick 'n' Toast or Elementals; the tools are already there... They're just going to get better.