Even More Heroes (and Monsters) of Ravnica

f you're just joining us this week, we're in the middle of saying farewell to the heyday of the Return to Ravnica block. Before getting into today's second, and final, look back over what in the block helped shape Commander, I want to touch on last week's listing of ten Commander decks—one for each of the guilds.

I knew many of you liked decklists, but the response was far better than I anticipated.

Looking over several Commander decks comes with challenges, and a few of you pointed them out:

But the majority of you jumped at the things you appreciated:

I was a little nervous sharing ten decks together last week, and wasn't sure if it'd even work out. Now I'm excited to take your feedback to tweak things the next time we do it. Thanks again for sharing your decks, ideas, and feedback! 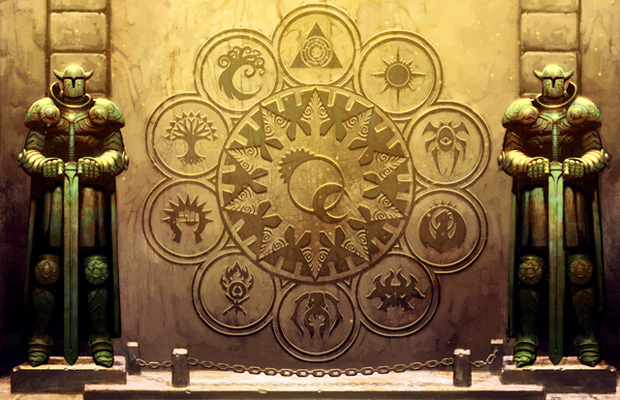 Which leads me to today's reflection upon Ravnica: The cards that have made the biggest difference for us in Commander. Unlike the tour de force of commanders and decklists, this is a sampling of the most powerful and game-changing cards to come from Return to Ravnica, Gatecrash, and Dragon's Maze, according to many of you, at least.

I hope you're ready for the best of rest.

The biggest common thread across your feedback was about the guild, specifically in how the block covered all of the guilds and gave them unique, powerful tools to use—both multicolor and monocolor, as Shayan shares:

As a member of the Izzet League, the cards that made the most impact for me in Commander would naturally be within the Izzet colors.

Thank you for writing these awesome columns!

Whatever two colors you happened to be most fond of was a pair of colors rewarded during our time on Ravnica. Shayan's choices reflect the love of everything Izzet, but this could easily be any of the other nine guilds. Even better, several of Shayan's cards were popular picks across the board as well.

Possibility Storm appeared with regular frequency, and it's not like Cyclonic Rift at all. Since it affects its controller too, the upside of Possibility Storm is fairly marginal. What it does do is prevent almost any deck from taking over the game. By forcing every spell cast to be swapped for the next (generally) random spell in the library means players will rarely get exactly what they want. It doesn't lock players out or prevent them from doing something, but it's a random element that creates unforgettable experiences.

While we've discussed Melek, Izzet Paragonplenty enough already, another common callout was that one of the new choices of commander from Ravnica was one you found really exciting. Whether it was to build one's own Commander deck for the first time, to explore a new way to play Commander, or to challenge you to try different cards in different ways, getting twenty new leaders to lean on was well worth it (and helps explain why last week was so successful).

But the most common card seen was Cyclonic Rift, and it's obvious why. Clearing away everyone else's stuff is already powerful, but when it's later in the game and everyone's stuff costs five, six, or more mana, it's backbreaking. While the downside of Cyclonic Rift is that it can't save your own stuff, if you're able to cast it overloaded, the odds are good you won't have to save your stuff anyway.

Andy even shared why Cyclonic Rift is something that's, perhaps, too good:

Most of these seem obvious as to why they should be included: giant, milling beatsticks, Seismic Assault on a 7-power legend, Exsanguinate 2.0, Primeval Titan's awkward cousin, and activated ability copying. But Cyclonic Rift...

It just disappoints me in that I now find it impossible to justify a blue Commander deck without Rift in it. It's just so asymmetrical, so lopsidedly powerful, that the times where its caster loses the game can be counted on one hand.

It's food for thought indeed.

But those weren't all the top cards submitted. Taz had a couple more:

Thespian's Stage was the triumphant returning twist on the previous copying land, Vesuva. The ability to fix your own mana, double up on a land that produces extra mana, or copy someone else's sweet land is amazing utility any Commander deck can use. And since the Magic 2014 rules changes for legendary permanents, copying legendary lands has gotten even better.

Rogue's Passage was a surprising pick to see come up so often, but it makes sense the more I've considered it... and realized that I've been slipping it into many of my aggressive Commander decks. The ability to hit unimpeded can be a challenge in Commander: Tokens and other easy blockers can gum up the battlefield, and with Supreme Verdict–type effects floating everywhere, the window for attacking opportunities is often narrow. Rogue's Passage gives those of us looking to deal the lethal 21 points of commander damage a surefire way to get through most defenses.

Yuri rounded out the rest of the common picks:

It might be easy to think that the flashy and powerful shocklands were the star attractions for mana sources, but those were all reprints—handy to have but not novel creations for the block. It was the Guildgates that stole the show this go around. With printing in all three sets, and plenty of cards that key off the Gate subtype, Guildgates are the easiest way to add dual lands for your three-or-more-color Commander decks.

And then there are the Primordials. I had the pleasure of previewing Sepulchral Primordial for Gatecrash and shared a Commander story from Pro Tour Gatecrash involving copying Sylvan Primordial. Each one carries a powerful trigger that scales with the number of players in the game, and each is flavorful and potent for its respective color. While there will always be an abundance of powerful things to do with seven mana, the Primordials represent the best of both worlds: a powerful spell in multiplayer and a fatty to attack with.

And you don't have to take my word for it regarding Primordials, particularly Sylvan. Check out Christo's picks:

Or how about Jack?

Primordials are just that awesome.

Before jumping into the last of the round up, I wanted to comment on Chromatic Lantern. It is a fine piece of mana fixing, and it's an absolute blessing for five-color decks. However, my expectations for this card are tempered by experience: artifacts, like creatures, have a tendency to get destroyed in Commander. (See Akroma's Vengeance, to be included in the upcoming From the Vault: Twenty release.) Chromatic Lantern is the most powerful artifact for pure mana fixing, but it's just as fragile. I prefer Darksteel Ingot because it takes specific types of spells, often involving individual targeting, to remove it from the battlefield. It might not give me as much fixing as Lantern, but relying on it to stick around forever is a tradeoff I'm willing to take.

The final wave of cards came with an expanded theme: three-color decks. While celebrating the guilds and color pairs they comprise was what Return to Ravnica block was all about, many Commander decks use more than just two colors. Our tour of Ravnica didn't disappoint players like Jerem:

My Top 6 Biggest Impact list consists of what I deem most worthy to join the ranks of my Damia, Sage of Stone Commander deck. The list is as follows:

Stephen had Naya—red-green-white—on the mind when picking cards:

That's the ultimate Commander take-away from Return to Ravnica block: Celebrating two-color pairs supports every deck with more than one color. Whether you want to take Ruric Thar, the Unbowed and build around casting nothing but creatures or decided to go deep with every color of Slivers thanks to Sliver Legion, Ravnica is filled with the multicolor tools to make it happen.

The Colors of the Winds of Commander

Now that Return to Ravnica block has been covered, it's time to turn our attention forward. While Ravnica has provided a bounty of colorful things, it's Magic 2014 that reminded us that Magic isn't filled with gold cards. In fact, Commander isn't necessarily multicolored either. That leads to today's prompt: What is the most important consideration for building a monocolored Commander deck?

By monocolored I mean not colorless (sorry Karn, Sliver Golem) and not more than one color, including hybrid (sorry Rhys, the Redeemed). From Kemba, Kha Regent to Kamahl, Fist of Krosa, what's the most critical thing you do to make your monocolor Commander work?

Join us next week when we look at the Top 20 for Commander from the past twenty years of Magic. See you then!