o between the end of last year and the beginnings of Gatecrash it has been some time since Top Decks has been dedicated to reporting the relevant formats' actual top decks. So with all respect to Domri Rade, Gyre Sage, and Duskmantle Seer... it's time to talk Ethereal Armor. 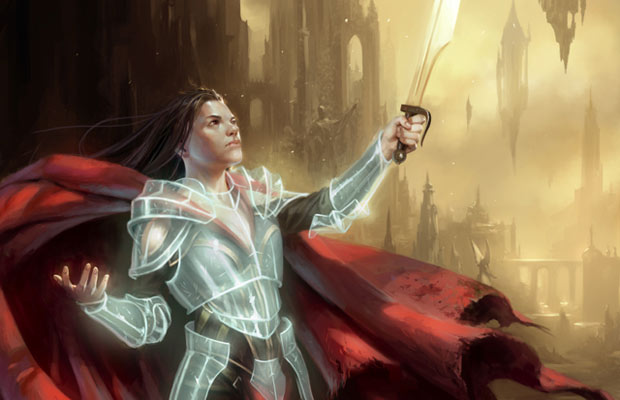 (Relatively) recent developments in both Standard and Modern (the current PTQ format) have revealed some very different successful strategies than the last time we touched on them in this column.

The top two decks in the finals of the recent Standard Grand Prix were both aggressive decks based on hexproof creatures loaded with enhancements. Reminiscent of the Team SCGBlack "combo" deck that put two players into the Top 8 of Pro Tour Avacyn Restored, these hexproof decks are designed for minimum interaction and maximum impact (with the opponent's face).

The Grand Prix–winning deck is a good example of the Standard Bant Auras.

As you can see, it has eight solid hexproof creatures—Invisible Stalker and Geist of Saint Traft—and a ton of ways to make them big. Bant Auras can start the game by fixing its mana with Abundant Growth, and that Abundant Growth can boost an Ethereal Armor down the line. Rancor is a top-flight enhancer "good enough for green decks" and obviously quite effective on Invisible Stalker, which can neither be blocked nor targeted.

Silverblade Paladin is quite the deadly assassin in this strategy, but maybe not in the most obvious ways. Sure, if you have a huge creature wearing a hundred Rancors and Ethereal Armors, perhaps the manyfold bounties of an Increasing Savagery, doubling damage will be attractive... but what about not pairing Silverblade Paladin when you have a Geist of Saint Traft already on board? You can instead pair the Silverblade Paladin with the 4/4 Angel token, allowing you to hit for 8 in the sky... 2 + 8 is 10, or half the other player's life total—might or might not be better than a more obvious double strike route. Just know that—especially with the Angel's evasion—this is an important option for the deck.

The much-decorated Joshua Utter-Leyton put some interesting twists on his Bant Auras; in the main deck we see Fencing Ace—which starts off with double strike—as well as Curiosity. Just putting Curiosity on a Fencing Ace can give you quite the little card-drawing engine, and Rancor on a Fencing Ace can strike down a Thragtusk, live, and hit the opponent. Curiosity in general not only works synergistically with Ethereal Armor, but—Fencing Ace or no—it can keep the deck flowing, especially when working with evasion creatures. Although the deck is fast (and many of the creatures are quite clearly hard to deal with, or at least target) it still has to commit tons of permanents to the battlefield. Having a backup—a hand full of Plan B—reduces the deck style's reliance on a single dimension.

Utter-Leyton's sideboard was built to beat creature removal—and sweepers more specifically. Strangleroot Geist might be targetable, but its point is to be good against cards like Supreme Verdict... the kind of cards where Invisible Stalker, and especially Geist of Saint Traft, are by nature exposed. Wolfir Avenger not only lives through quite a few kinds of commonly played creature removal, but Josh could play it at the end of the opponent's turn (ideally a turn where the opponent just tapped down or out for a big defensive card).

It is probably fair to say that Jund is still THE defining strategy of the Modern format, but if you plan to win a Pro Tour Dragon's Maze qualifier tournament, likely you will have to be prepared to beat the Bogle deck.

Actually predating the Standard version by a short time, this deck is based on similar principles: Play a hexproof creature that the opponent can't target. Load it up with Ethereal Armor and other synergistic creature enhancements. Bang, bash, kill quickly.

Now, the Modern format gives you access to quite a few more cards than Standard, so the card choices will be different other than Ethereal Armor (a card that exists at the perfect intersection of card power and being one mana). Two-thirds of the creatures in this deck are one mana, which can set you up for some immediate beatdown with Rancor or totem armor Umbras.

Because a favorite play of the dominant Jund decks in Modern is to flip Liliana of the Veil off their Bloodbraid Elfs, the Bogle deck—hexproof that it may be—has to find a way around the Cruel Edict ability on that powerful Planeswalker.

That is where Dryad Arbor comes in.

A Forest, Dryad Arbor is accessible off of Misty Rainforest or Verdant Catacombs. If a Jund player is careless (or doesn't know that Dryad Arbor is coming), the player might think he or she is about to get an X-for-none, taking down a threat covered in creature enchantments... but the Bogle deck can just go and find Dryad Arbor in response and sacrifice that. In a pinch, the 1/1 body on Dryad Arbor can itself play offense and get just as a big as an actual offensive creature.

Surprisingly mighty Magic from this sector.

Now, despite the viability of the Bogle deck, the Top 8 of the most recent Modern Grand Prix featured five successful, different archetypes... none of which involved an Ethereal Armor. While Jund remains a popular powerhouse, Grand Prix Bilbao showed us Thundermaw Hellkites, Deathrite Shamans, Deceiver Exarchs, and even Clutch of the Undercity as defining spells. Here's how the Bilbao Top 8 shook out:

Red-White-Blue Midrange has quickly become a darling of Modern, closing multiple PTQs as well as clinching the Bilbao title.

Red-White-Blue Midrange does one thing well, which is potentially everything. If it draws the right cards, it can present an advantageous position in any matchup. Thundermaw Hellkite can tear up Lingering Souls tokens. Lightning Helix can make Bump in the Night look silly. Geist of Saint Traft—especially with Lightning Bolt, Path to Exile, and Electrolyze clearing the path—is just as lethal in Modern as it is in seemingly every other format. Aven Mindcensor is a direct—and potentially clock-putting-on—answer to land-search strategies from Sakura-Tribe Elder to a theoretically lethal Scapeshift.

And on top of all of those, Red-White-Blue Midrange has room for a nice spread of permission cards.

Red-White-Blue can potentially have the upper hand, regardless of who is sitting across the table.

Jaklovsky played a pretty straightforward Jund deck; it looks like Deathrite Shaman will simply be stock in Jund decks. All its abilities are good, but when combined with Marsh Flats, Verdant Catacombs, and Misty Rainforest, it is just a great mana Elf.

Jaklovsky did not play the Lingering Souls that added even more individual card efficiency to Jund at the end of last year; instead, he opted for one of the most disruptive possible configurations with eleven main deck discard spells.

At five mana in the sideboard... Bituminous Blast! Holy time machine! While Bituminous Blast was never the most mana-efficient way to take out a creature, the nigh-certainty of card advantage (as well as the possibility of potentially "winning the cascade lottery" by hitting Bloodbraid Elf and another card) make Bituminous Blast one of the most exciting catalysts in the Jund arsenal.

The general concept of the Scapeshift deck is to use green acceleration—Search for Tomorrow, Sakura-Tribe Elder, and so on—to generate a critical mass of lands in play; then use Scapeshift to get one or more copies of Valakut, the Molten Pinnacle + Mountains. Ka-boom.

Scapeshift decks have two major incentives: (1) they play lots of cards that are just very good (like Cryptic Command or good creatures out of the sideboard) and (2) Scapeshift itself is a one-card combo; if you have enough lands in play, you win immediately.

While he only played one copy, Calzolari brought back Prismatic Omen. A kind of mana fixer that can make

more palatable in a many-Mountains deck, Prismatic Omen makes it much easier to kill with Valakut, the Molten Pinnacle and Scapeshift because "everything" counts as a Mountain.

The GP Bilbao coverage staff considered Deltour's innovation of Clutch of the Undercity its #1 card of the tournament. Scapeshift, as we've said, is a "one-card combo," and playing Clutch of the Undercity just makes it much simpler to draw that one card. With seven or more lands in play, you can seamlessly transmute for Scapeshift and play it immediately. Like we said, ka-boom.

Modern Birthing Pod decks can chain up with value from none-to-five; they can block well, accelerate mana, and find solutions to any number of the format's problems. But these decks tend to kill with infinite Kiki-Jiki, Mirror Breaker combinations.

Interestingly, Kiki-Jiki, Mirror Breaker can combine with creatures at the three, four, or five.

While most successfully navigated Pod games end up with Kiki-Jiki, Mirror Breaker setting up an attack for essentially infinite damage, how you get there is most of the fun. If your opponent has a Birthing Pod and a persist creature... watch out!

At the four, Pod decks play both Murderous Redcap and Glen Elendra Archmage. If you have a Birthing Pod in play, you can sacrifice the four, find Zealous Conscripts, untap the Birthing Pod, and sacrifice the persisted second four (which can find Kiki-Jiki, Mirror Breaker).

Chord of Calling can serve in similar setup capacity.

1 Jace, Architect of Thought 3 Liliana of the Veil

1 Life from the Loam 1 Terastodon