So how does this paragon of imprint-ness work?

The short answer is that Mimic Vat can make a creature every turn; a copy of a creature, that is, that was once on the battlefield. There are other implications, like the fact that Mimic Vat can upgrade to better creatures over the course of the game, or mess up the opponent's strategy on the off chance that he is trying to play a graveyard-centric creature strategy, but the main thing is that Mimic Vat makes a temp.

The structure of Mimic Vat—the ability to produce the same creature (usually) over and over encourages Mimic Vat deck designers to choose, in particular, creatures that have special abilities when they enter the battlefield. The creature doesn't stick around forever, but doing something useful when it hits the battlefield helps to justify the cost, and recurring three-mana requirement.

Consider this deck by auaiomrn, from a Magic Online Standard Daily last week:

This deck features all different kinds of cards with special abilities when they enter the battlefield. Both Frost Titan and Grave Titans do something interesting when they hit the 'field (with Grave Titan particularly building on a lead over time); most all of auaiomrn's creature cards have that in common.

Wall of Omens and Sea Gate Oracle are just fine to play; you can use them to defend yourself while digging through your deck and smoothing out your mana draw. Or you can use them with Mimic Vat to act like a kind of discounted Jayemdae Tome.

His deck does the opposite good stuff, too. There is a discard theme featuring Duress, Liliana Vess, and, of course, Liliana's Specter. Liliana's Specter + Mimic Vat can even lock the opponent at no cards in hand! Wizards has always been careful with cards like Disrupting Scepter; even if you could set up a kind of soft lock, Wizards forced you to use Disrupting Scepter on your own turn. Not so with Mimic Vat! A Mimic Vat + Liliana's Specter can hit the opponent during draw. Your opponent will never get to the part of the turn where more spells can be cast!

Last, but not least, auaiomrn's deck can imprint Skinrender on Mimic Vat to create a machine gun! Subtly—even if the Skinrender leaves every turn—the counters it sticks on its victims don't fade so easily. As such, a "machine gun" SkinrenderMimic Vat can potentially take down bigger opponents by adding together multiple rounds of -1/-1 counter accumulation.

A deck with similar themes is the off-beat White-Black Allies deck designed by our own Jacob Van Lunen.

Remember all the stuff we said about locking the opponent during the draw step with Liliana's Specter? The same thing holds for Bala Ged Thief in this deck. In fact, you can have any Ally imprinted on your Mimic Vat and accomplish the draw-step discard as long as you have a Bala Ged Thief on the battlefield.

Allies makes for a particularly fine mate with Mimic Vat because having literally any creature imprinted on Mimic Vat will help you put together an ever-increasing snowball, rolling violently down the hill. As we said, most Mimic Vat creature choices have enters/leaves the battlefield up-sides, but Allies, a theme that already has that built into its deck DNA, does so doubly.

Hada Freeblade and Kazandu Blademaster on the battlefield? It doesn't matter which Ally you have imprinted on the 'Vat ... any and all will pump the Soldier Allies!

A really cool Easter Egg I discovered testing Jake's deck is to use Mimic Vat at the end of the opponent's turn when I didn't have anything else. For example at the end of the other guy's turn I can make a Talus Paladin; because the exile trigger goes on the stack at the beginning of the next end step, that Paladin won't be going anywhere until the end of my turn. I can now use the Mimic Vat on my own turn to make another Paladin, setting up a more devastating short-term attack because, while both Paladins will be attacking, the second one will additionally build up its end step twin. The original Talus Paladin will get a little bit bigger, which might be necessary to knock down a Wall of Omens or compete with a Molten-Tail Masticore (Molten-Tail Masticore vs. Mimic Vat is an interesting contest, let me tell you).

All kinds of cool.

Following are some other black decks whose Mimic Vats gain value in similar ways to the decks we've looked at already.

Due to the influence of popular Internet writers like Gerry Thompson, Blue-Black Control is probably the most common kind of Mimic Vat deck you will encounter in Standard. This one by prolepsis9 was basically just the first Blue-Black I found when starting the research for this article. Congratulations!

You'll notice this deck is full of creature elimination ... Consuming Vapors, Doom Blade, even Disfigure in the sideboard.

The Blue-Black deck is just waiting for something to kill! This deck doesn't have that many creatures (and the ones it does have don't seem overly optimized for Mimic Vat) but it actually gets a lot of mileage out of the popular imprint card, just by having so much removal.

Titans and Sea Gate Oracles we have already talked about. And honestly, it isn't even the Blue-Black deck's own creatures that are always ending up imprinted on the Vat ... But what about Abyssal Persecutor?

This creature is just mana efficient. It is in fact hugely mana efficient (and huge). A 6/6 black creature for only four mana? Flying and trample? Too bad about that whole "you can't win the game" clause! This card could really be something!

When you get done successfully blocking all the Vengevines and staying two steps ahead of the average awesome Planeswalker or Titan, you have all the tools in the world to be able to get rid of the stray Abyssal Persecutor yourself. As was discussed, this deck has a lot of creature control. Consuming Vapors or Into the Roil can work—but the most common case? You just have Jace, the Mind Sculptor. Spare a loyalty counter? You can "Unsummon" the Abyssal Persecutor after the opponent is "already dead" to make it nice and official.

The Mono-Black Control deck played by kschreve is a bit unusual to look at... But its use of Mimic Vat is pretty straightforward. This is a repeat, to an extent, of the Blue-Black deck's setup of Mimic Vat based around using an exhaustive amount of removal to get something under the Mimic Vat; and again, we have the "machine gun" possibility of Skinrender on the Vat, though sadly not all the creatures are so cooperative.

How about the details?

Vampire Hexmage is pretty cool: For three mana, you have a threat opportunity, plus a straight black answer to any planeswalker (or Tumble Magnet, or Pyromancer Ascension), turn after turn.

Gatekeeper of Malakir doesn't quite work (you can get a Bear, which isn't exactly awful, but is no Skinrender).

The finishers are both interesting. Wurmcoil Engine might actually get some 3/3s going! How about Skithiryx, the Blight Dragon? This is the oddball because the rest of the deck doesn't seem to be poison-focused. Of course you can open up with a Rorix Bladewing-esque Blight Dragon, all hasty and dangerous ... But when it dies, the Mimic Vat can take over. Haste is a foregone conclusion now! Probably doesn't take that long to close 'em out.

This use of Mimic Vat in the core-Boros strategy is both practical and quite far afield of everything else on this page. The main-deck Boros strategies revolve around notions of speed, landfall, Equipment ... and combinations thereof. For example, Adventuring Gear is a piece of Equipment that you can get with a Stoneforge Mystic that gives everybody the deceptive impact of a Steppe Lynx or Plated Geopede.

But out of the sideboard, Mimic Vat gives Boros a very different plan to play.

Realistically, there will be match-ups (say, the mirror) that are all about removal. Heck, this deck even has Arc Trail as a two-for-one waiting to happen. And when creatures die, Mimic Vat starts to thrive. This deck shows a great way that Mimic Vat can not only serve a key strategic purpose, but also turn the opponent's plan around.

So if I kill your Geopede what is going to happen again? Oh, that's terrible!

It is no longer about speed—it is about overcoming attrition. Every removal spell the opponent plays gets him further behind. Whereas you use your removal to figure out where you can upgrade your Mimic Vat imprint! Blocking becomes incredible for you because you are always trading at a potential advantage, and you can essentially produce blockers at will (or at least a shallow cost of three mana).

It's disheartening to read, but for the opponent—even worse to live through.

Last, but certainly not least, we have one of the most misplaced-looking Mimic Vats in the entire Standard metagame!

Valakut, the Molten Pinnacle Ramp is essentially a modern classic. This is a deck that came to the format from the last format. It doesn't "need" a whole lot from Scars of Mirrodin to be successful, but here you have a Scars of Mirrodin card sticking out like a sore thumb.

Part of the issue is that there aren't a whole lot of creatures in the deck to imprint on the Mimic Vat ... and maybe that is part of it.

Valakut, the Molten Pinnacle is a fine "over the top" deck. If it simply gets Primeval Titan, the entire deck is immediately online. Valakut, the Molten Pinnacle (or two, or maybe more) is all over the battlefield. An attack from the Titan is worth one-third of your life points to begin with, and can be immediately lethal with the right configuration of nonbasics and Mountains. 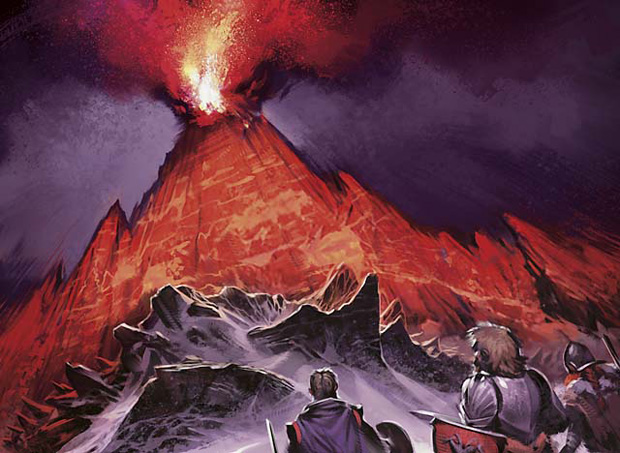 Avenger of Zendikar is worse in every way (it's expensive, it's a powerful but generally less immediate threat), but very difficult to slog through from the other side—certainly still a bomb.

So where are the holes?

What is scary to this pinnacle of Aaron Forsythe Magic?

How about another six? Another seven?

Facing off against another Primeval Titan becomes a joy rather than a stress point. Trade Titans ... All of a sudden you have a kind of Primeval Titan-spitting land-searching hell- (and hellfire-) raising machine. All Is Dust? Is that supposed to be your out? All Is Dust does not remove a Mimic Vat, and might actually prove disaster.

I mean Avenger of Zendikar—again and again—on a stick? It's horrifying to even consider!

What is fun and exciting to me is how different and hole filling and strategic this implementation of Mimic Vat is, relative to all the others on this page. The card is the same, what you imprint is different of course, but the attitude goes from incremental card advantage, to winning an attrition war. From taking advantage of your removal (or theirs), to some kind of turbo-charged trident sharpening every point. It will be interesting to see if this strategy imprints itself across a wider world of success in Standard.