ello and welcome to another week of Return to Ravnica previews here on DailyMTG.com. I'll get into some metagame analysis after we take a look at the latest preview card. Today's preview card is one of the biggest fatty boom booms ever printed for its cost. I've always like gigantic monsters that threaten to take over the game by themselves. But sinking a lot of mana into a big creature is risky; you end up spending a lot of resources to accomplish nothing if your opponent has the right kind of removal. However, your opponent won't always have the correct removal spell. The right kind of gigantic monster can take over a game if it goes unanswered.

Remember Broodmate Dragon? Getting 8 points of flying power for six mana is a great deal, but the fact that Broodmate Dragon's power was split between two separate bodies made it a much more powerful card. Broodmate could play offense and defense at the same time, it required multiple removal spells in order to be dealt with, and it ended the game very quickly if it went unanswered. For months, Broodmate Dragon was the premier win condition for control decks. 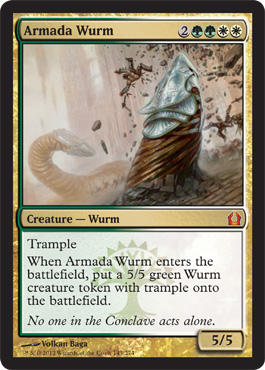 Siege Wurm made a friend since we left.

Here's a win condition that I can get behind. The Titans and Wurmcoil Engine are rotating out of Standard and everyone has been asking what six-drops people will play. Armada Wurm has a lot of selling points. Armada Wurm isn't very forgiving to opposing players—an unanswered Armada Wurm ends the game in two swings. I'd happily play a 10/10 trampler for six mana in a lot of strategies, but I'd rather play Armada Wurm. This is one monstrous creature that's sure to see some competitive play and will undoubtedly become a Commander favorite and a must-have for Cubes. 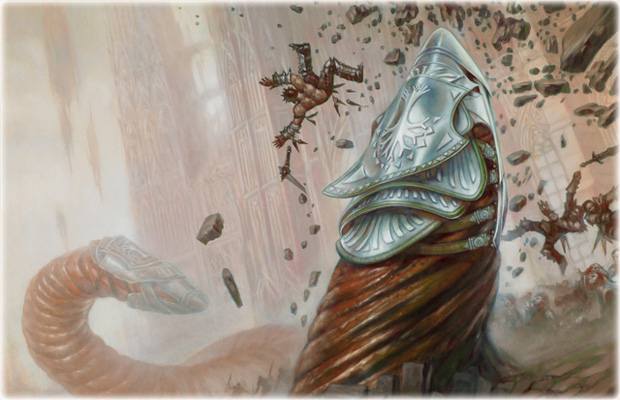 I've spent the last two weeks talking about Standard and not paying much attention to the other Constructed formats on Magic Online. Modern has been steadily increasing in popularity since the World Magic Cup and the amazing coverage that accompanied that event. I was at a local card shop last week and there were multiple tables of players battling with their latest Modern brews.

The Modern format is wide open. There's no dominant deck and even the most established archetypes only account for tiny fractions of the current metagame. Take a look at the myriad decks that went 4–0 in last Saturday's Daily Events:

Let's examine some of the decks that went undefeated in last Saturday's Daily Events!

RUG Delver is the deck to beat in Legacy. The Modern version of the deck isn't quite as streamlined, but the most important pieces of the archetype remain intact. All of the creatures are among the best ever printed. There's no weak link in Tarmogoyf, Snapcaster Mage, Vendilion Clique, or Delver of Secrets. The deck plans on sticking an early threat and protecting it with countermagic and removal. Vedalken Shackles is one of the best cards in Modern and this seems to be the best home for it in the current state of the metagame.

Despite being three colors, Trollcat's RUG Delver list manages to play a lot of basic lands; this gives Trollcat an incredible sideboard plan against Tron strategies (decks that play Urza's Tower, Urza's Power Plant, and Urza's Mine) and other multicolor monstrosities. Trollcat can take out the most color-intensive cards, like Cryptic Command, and sideboard in three copies of Blood Moon. I once won a PTQ playing a combo Elves deck that had four Blood Moons and three Magus of the Moon in the sideboard, so I'm definitely on board to Blood Moon people out of the game. This is an interesting take on a well-established archetype, and I'll be excited to see if RUG Delver strategies continue using this many basic lands and Blood Moon in future weeks.

I've always been a fan of Second Sunrise combo decks. The latest Second Sunrise, Faith's Reward, makes an excellent addition to this type of strategy. The deck might seem confusing if you've never seen it before. Flying Man wants to play a lot of artifacts that can be sacrificed to draw cards. Once there are enough artifacts on the battlefield, Flying Man can sacrifice all the artifacts, draw a bunch of cards, and cast Second Sunrise or Faith's Reward—all of the artifacts come back to play and they can all be sacrificed again to draw a bunch of extra cards, then you cast Second Sunrise again and start a chain that allows you to draw your whole deck. The deck uses Reshape to turn any artifact into a Lotus Bloom. Once you have a Lotus Bloom or two, a Krark-Clan Ironworks, and/or a Ghost Quarter involved in the loop you start to generate mana each time you cast Second Sunrise. The deck creates so much mana that it can fire off a Banefire for lethal damage.

This is one of the most math-intensive strategies in the history of competitive Magic. The correct line of play is different every game based on what you need to achieve your combo. For example, if you're going off and you don't have a second copy of Second Sunrise or Faith's Reward, you're definitely going to want to use Conjurer's Bauble on Second Sunrise or Faith's Reward and use an effect that shuffles your library before you draw the bulk of your cards. (This will drastically increase your chances of drawing into another copy.) The same can be done with Reshape if you have plenty of Second Sunrises but not enough mana to get exponential card drawing from the combo iterations. I've discussed this type of deck at length in the past. Here's a link to my "Eggs" primer from four years ago. A lot of the cards in that version of the deck are outdated, but the column can give you a much better grasp on the best way to approach the math of the combo. (A Modern version is here.)

2 Honor of the Pure 4 Intangible Virtue

White-Black Tokens has a surprising amount of success in the Magic Online Modern scene. The deck is very similar to its Standard counterpart, but it gets access to significantly better disruption, removal, and token generation. Spectral Procession is still the best token producer ever printed, especially in a format like Modern where the mana is so good. Tidehollow Sculler and Thoughtseize are about the best you can ask for in the hand-disruption department. One of the things I really like about this deck is the inclusion of Zealous Persecution. Zealous Persecution is incredibly strong in the current Modern format. There are a lot of Birds of Paradise, Noble Hierarchs, Grim Lavamancers, Delver of Secrets, Snapcaster Mages, and various token producers.

JohnnyHotSauce's dedicated token deck gets a lot of mileage out of Zealous Persecution, many times killing a big portion of the opposing board while making his attack that much more potent. Zealous Persecution is an incredible combat trick. Attacking with an army of tokens will likely elicit quick blocks all over the place; the Orzhov Pontiff effect is a drastic change in combat math that often demolishes the opposing player's board. I'd recommend this deck to anyone who enjoys token strategies; it has a nice mix of disruption and threats. I do, however, fear that this deck might lose a lot of games because of how poorly it mulligans.

Birthing Pod is an exceptionally powerful card that will probably get a lot better in Modern after the release of Return the Ravnica. Abrupt Decay will, without any doubt, become a staple in Modern and Legacy. We can expect most decks to cut artifact or enchantment removal in favor of the incredibly versatile removal spell. Birthing Pod might usually come down for three mana, but its converted casting cost is four, so you won't have to worry about it being destroyed at all in Game 1 anymore, and it's less likely people will have artifact removal in their sideboards. Many Birthing Pod players use Melira, Sylvok Outcast in conjunction with persist creatures and a sacrifice outlet.

DreamKing20XX chose to go the Kiki-Jiki, Mirror Breaker route. This version of the deck can win completely out of nowhere. Think about it this way: if you have any two-drop and any four-drop on the table, a Birthing Pod and two mana will be enough to win you the game. Simply tap the Birthing Pod and sacrifice the two-drop to grab Deceiver Exarch, untap the Birthing Pod, tap the Birthing Pod and sacrifice the four-drop to grab Kiki-Jiki, Mirror Breaker. It's that easy! The deck is deceptively fast and it's often difficult to gauge when the deck is going to kill you. This makes opposing players wary of tapping out on any turn and can often give DreamKing20XX time to set up combo pieces or construct a plan to battle through disruption. I'm planning on battling with Birthing Pod once Modern rolls around. This deck is absolutely absurd. 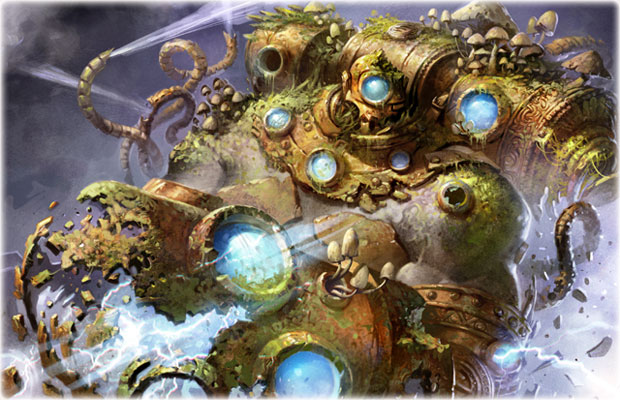 Modern is wide open. We still have a full season of Limited PTQs before we get into the thick of Modern season, but I recommend working on a Modern deck and playing it as much as possible in the lead up to the PTQ season. You'll find that you have a huge leg up on your competition if you have a few extra months of practice under your belt. Modern used to be difficult for many players to get involved in because of the expensive Ravnica shocklands. With those cards being reprinted in Return to Ravnica it's becoming easier to get involved with the fastest-growing competitive format of Magic.

Return to Ravnica Prereleases are less than two weeks away! Be sure to contact your local gaming locations to find a Prerelease near you. Each store only gets so much product, so I recommend preregistering for your event. The new set looks like one of the most powerful ever printed; don't miss your chance to be one of the first to acquire these new weapons!