re you ready for your first big tournament featuring the all-new (or all-returned, new) cards from Magic 2011?

After reading this article you will ... well, you might be, let's say. There have been some cool implementations of the new (and "comeback") cards, and in some cases spawning new, different, and expansively diverse archetypes. So don't be surprised when a Mythic Conscription opponent can suddenly defend himself, or crumple—too depressed—when the Flashfreeze you've been sandbagging doesn't actually stop Jund's six-drop. 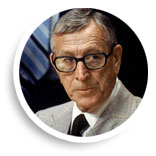 "Failure to prepare is preparing to fail."
—Attributed to Coach John Wooden

M11 has come, so far, in two flavors: New cards enhancing existing decks, and new cards spawning brand new ones. Let's look at some of the first group first.

4 Knight of the Reliquary 2 Bant Charm

Pro Tour Qualifier winner Sakurai Taiki enhanced his Mythic Conscription deck with what will probably be the most played M11 card overall, Mana Leak; additionally, he deftly navigated the shifting metagame by making his creature deck more resistant to Mana Leak itself.

Negate was already a popular sideboard card in this archetype, particularly against Day of Judgment. The infusion of Mana Leak in the format gave Taiki license to not only adopt that card (a no-brainer for many decks playing blue), but he gave his permission some redundancy by moving Negate to the main.

Make no mistake, the tools and the card choices look similar, but this is a completely different deck. Rather than just going for an explosive opening with Lotus Cobra (possibly leading into a fast kill via Sovereigns of Lost Alara fueling Eldrazi Conscription), Taiki's deck can actually hold a lead after he has gotten one. Traditional Mythic and Mythic Conscription stacks are typically accelerated "Tinker" decks playing the beatdown role; this one is more of a Counter-Sliver; again giving it a better perch on the metagame clock against control. If there were a combo deck in the format, Taiki's deck would probably perform better against it than a regular old Mythic.

We mentioned that Taiki's deck not only plays Mana Leak, but seems more prepared for Mana Leak itself.

Note those three Summoning Traps. When he goes for a Lotus Cobra second turn and the opponent smugly shows him a brand-spanking-new Mana Leak, Sakurai might just freebie out that Summoning Trap. 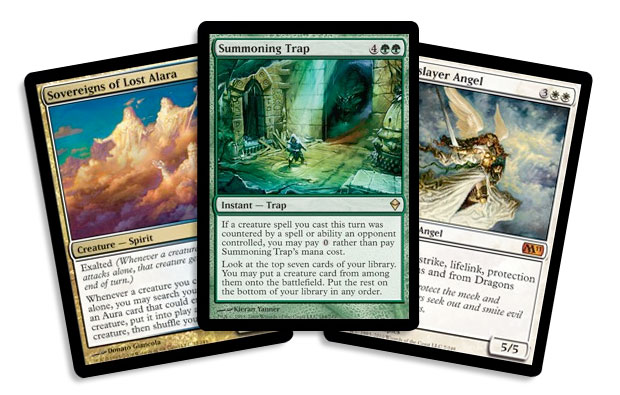 ... And if that means that opponent is facing down a turn-two Baneslayer Angel—or for Akroma's sake a Sovereigns of Lost Alara—it just is what it is; know what I'm saying?

The PTQ finalist was also a Mana Leak miser.

With this deck we see essentially a wholesale return to the permission-based White-Blue decks from the Tap-Out / Planeswalker builds we have been used to for the past several months. Does Junichiro's deck ultimately win with planeswalkers? Yes. But the process of getting into a winning position is quite different. 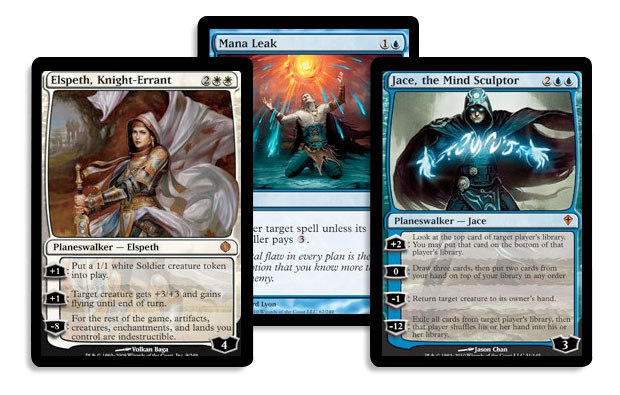 A permission deck will be far stronger against resisting "must-counter" threats like Mind Sludge on five, Identity Crisis on six, and Cruel Ultimatum on seven ... but all things considered, be an inferior defender against first turn Goblin Guide.

Especially given his complete lack of non-Wall of Omens creatures, I find Junichiro's paucity of Day of Judgment effects puzzling (only two copies of Day of Judgment, no Martial Coups at all), but Condemn seems to be giving him some additional room.

Jumping from a White-Blue regression to a radically different take on the colors—and a different third color than we are probably used to seeing given the past few months—I give you Erkki Siira's second place deck from Finnish Nationals:

Siira's deck is extraordinarily disruptive. Yes, he added Mana Leak like almost every other blue mage. But in addition we have Duress, Inquisition of Kozilek, and, conditionally, the great Esper Charm! 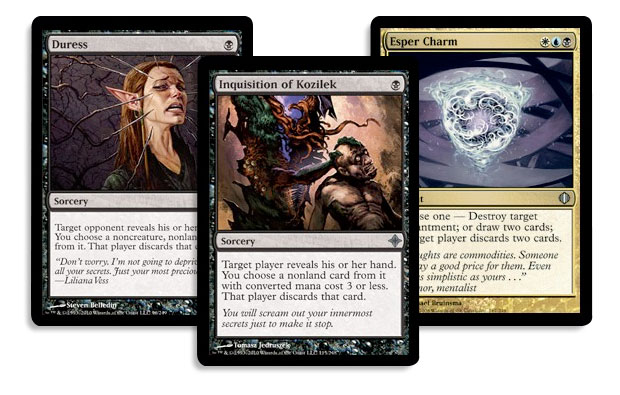 So what did he cut?

Well there is not one Spreading Seas in either the starting sixty or the sideboard. Even more unusual: All manner of board-sweepers—a combination of not just Day of Judgment but All Is Dust, too—are in the sideboard. 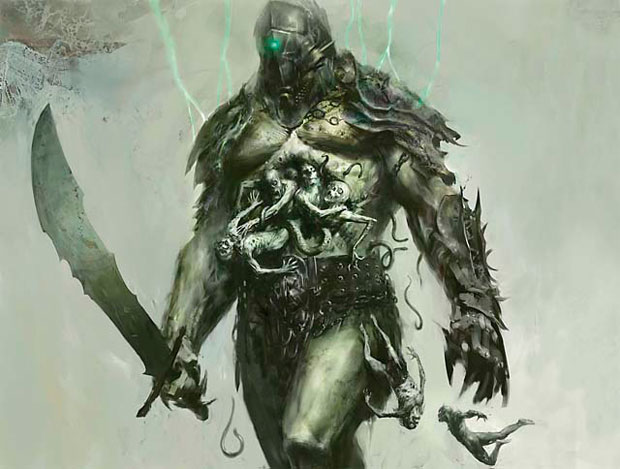 Maybe that shouldn't be surprising ... Siira played a ton of creatures. And headlining those creatures was Grave Titan!

Big, huge, 10 power to start; supplementing only a pair of main-deck Baneslayer Angels in this case, but a ton of walls; Siira used extra Walls where most players have sweep.

A superficial comparison might be Grave Titan versus Broodmate Dragon. At the same mana cost, Grave Titan offers more power, across three bodies (instead of two). As a top deck, it is probably stronger, giving the opponent less value on a Gatekeeper of Malakir or Consuming Vapors. In addition, the ongoing 2/2 production is quite synergistic with Sarkhan the Mad. 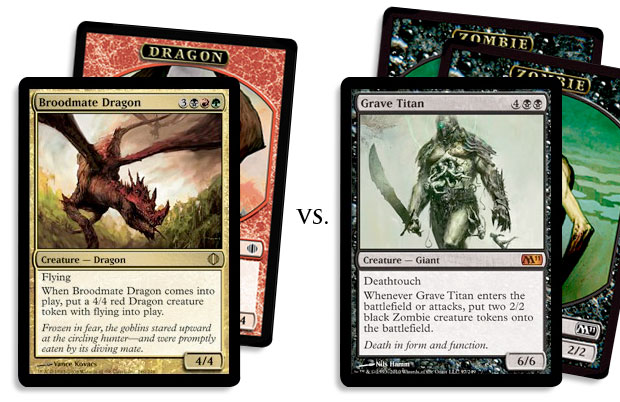 As mentioned above, you can't Flashfreeze a Grave Titan.

Pearson's deck is from a Midwest Masters Qualifier held by Professional Event Services; the same tournament gave us a first appearance by ...

This is a nice implementation of Fauna Shaman as a toolbox + card advantage engine. Obviously the deck can start dumping Vengevines with the ability to re-buy them at any point for free cards. Subtly, Robert could also go and get a Ranger of Eos, which is basically like tutoring for a 3/2 Concentrate (or more, with Vengevine). 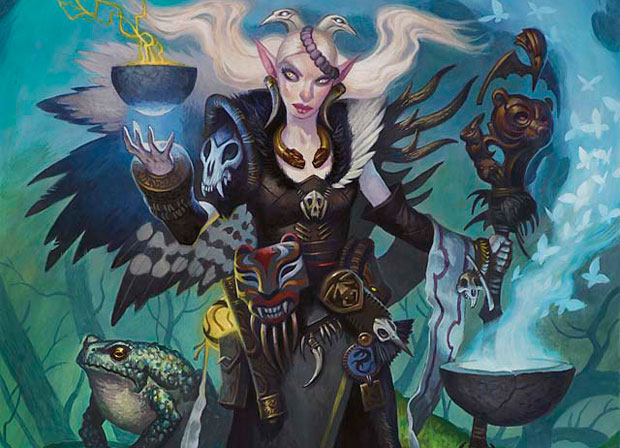 Sphinx of Jwar Isle doesn't really hold up as a primary fighting flyer in the grand scheme of the format (it's terrible heads-up against a Baneslayer Angel, and given its cost is easily answered by any control deck); but playing the big six as a singleton in a Fauna Shaman deck is quite different than where it has been played in the past. To wit, Robert has a much lower chance of drawing the thing ... but if he wants a next-to-impossible-to-remove blocker (and eventually threat) aginst Jund ... he's got it.

This is a straightforward hybridization of Next Level Bant and Mythic Conscription, only this time, with feeling. 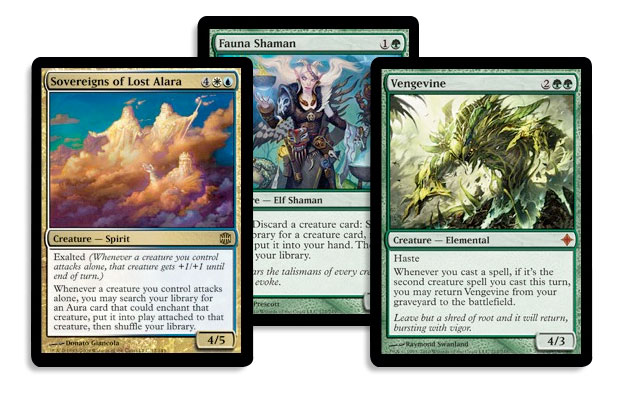 Fauna Shaman is obviously a sick enabler of Vengevines; Vengevine was already a top—even full-on defining—threat in this metagame; but with Fauna Shaman, it is officially better than ever. But you know what is even better? Tutoring up Sovereigns of Lost Alara on demand! I'm not even sure a body can handle the Vengevines; but it's not like Sovereigns gets any less lethal when you can find it at will.

The PTQ in Kanazawa was basically painted in Titans and Forces. Here are three different looks:

The PTQ winner was a more straightforward ramp deck. Primeval Titan for Valakut, the Molten Pinnacle plus Mountains aplenty. Back-up plans included Siege-Gang Commander and Avenger of Zendikar and their many tokens.

Another red-green-based deck, this time featuring somewhat more ramp orientation by moving Oracle of Mul Daya to the main; an echo of the Block version, You played Comet Storm as a breaker. His sideboard was nothing but life-gain with four Obstinate Baloths and a pair of Pelakka Wurms to stymie red.

Rather than going for Valakut, the Molten Pinnacles to kill the opponent, Shougo used his to set up—and recover from—what might be the most powerful, game-state-altering sorcery since Cruel Ultimatum: Destructive Force.

I like the addition of blue, and in fact, I think Frost Titan is a very appropriate supplement in this kind of a deck. Frost Titan can help keep a creature down, and, along with Mana Leak, can help resolve Destructive Force in the first place.

Instead of blue, we have white for Ajani Vengeant. Ajani can also keep a creature down and disrupt mana to get Destructive Force to resolve. Playing white also gave Berg a full eight-pack of man-lands to go and get with his Primeval Titans and vastly superior creature defense via Day of Judgment, Wall of Omens, and Condemn.

I'll say this to anyone preparing for a PTQ, Nationals, or other important Standard tournament this weekend: Be prepared for Mana Leak. It's showing up in everything from the obvious control decks (white-blue, white-blue-black, and so on), to the beatdown decks—even main deck—as well as the big mana decks ... you have to admit there is something a little bit saucy about a ramp deck that can force through its Wildfire upgrade with a Counterspell!