ello and welcome to Perilous Research, the newest column here on DailyMTG.com. Perilous Research is a column dedicated to the competitive world of Magic Online. Each week, I'm going to look at Daily Event results and explain how decks have changed from the week before. This column is an incredible tool for players looking to improve their results in competitive play. A quick read every week will give you a solid understanding of the metagame in all Constructed formats on Magic Online. 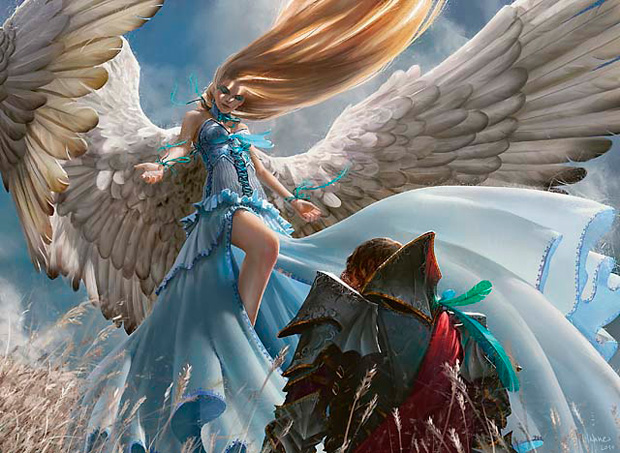 Two weeks ago, the Standard metagame was dominated by Delver of Secrets. The number of White-Blue Delver decks that had gone 4–0 was more than double that of the second most successful deck. Since then, White-Blue Delver has slowly loosened its grip on the format. Last week, red-green-white decks, both Birthing Pod versions and less complicated versions like the one played by Martin Juza at Grand Prix Manila, became very popular. Juza's creature brew punished Delver players and many started picking up more aggressive decks that were well positioned against the red-green-white strategies. Here's a breakdown of the decks that managed to go 4–0 in last Saturday's Daily Events. 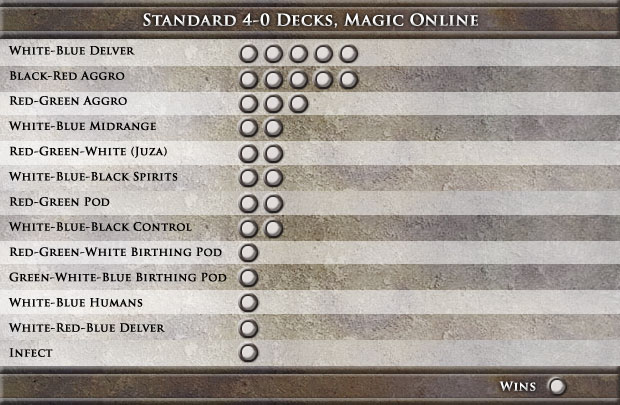 White-Blue Delver builds remain similar to the past few weeks. Many players have decided to include a second or third Gut Shot to significantly improve their matchup against Birds of Paradise/Avacyn's Pilgrim/Llanowar Elves strategies. Versions with Blade Splicer performed better a few weeks ago, but this week, Delver made a return to form. All but one Delver deck to go 4–0 played three or four Geist of Saint Traft and Restoration Angel.

I would expect this week's Delver decks to look a lot like Battle7's undefeated version:

White-Blue Delver managed to make as many undefeated players as any other deck, but this week's results are significantly less lopsided than usual. Aggressive black-red decks are this week's big winner. The deck is growing in popularity because it offers players an excellent Delver matchup and its Blood Artists let the pilot make aggressive trades favorably in creature matchups. Aggressive black-red decks have been performing decently in the past few weeks, but many of those implemented Birthing Pod as a powerful engine alongside Gravecrawler. This week, none of the undefeated black-red decks played any number of Birthing Pod in the main deck. Falkenrath Aristocrat is excellent against the current field of red-green-based decks. There are very few players with Lingering Souls and that creates an excellent opportunity for Falkenrath Aristocrat to swoop in and pick up some free wins.

Red-Green Aggro performed exceptionally well when you take into consideration how few people actually play the deck. Bonfire of the Damned is finally being recognized as a four-of in many decks that have previously only included one or two copies. Bonfire of the Damned is significantly better in a deck that's good at creating a strong board presence. The versions of Naya that did very well last week were fully committed to board presence, playing four Bonfire of the Damned and a pile of lands and creatures. The Red-Green Aggro decks function similarly to Juza's deck. However, these decks also include somewhere between two and five Equipment (Sword of War and Peace and/or Sword of Feast and Famine). The Equipment performs well against control and can often win Game 1 very handily against other red-green or Naya decks. The power of the Swords gets diminished greatly in Games 2 and 3, when these decks have access to Ancient Grudge.

4 Huntmaster of the Fells 3 Thrun, the Last Troll

Standard is becoming more balanced. The success of aggressive black-red and red-green strategies might push people toward white-blue midrange decks in the coming weeks. Some white-blue midrange players have begun including some number of Stonehorn Dignitary and Venser, the Sojourner. This combination will make it very difficult for aggressive decks to ever push through with an attack. However, post-board, the combination becomes a huge liability because Zealous Conscripts can steal Venser, the Sojourner, allowing that player to use the Planeswalker's ultimate.

MagicRare's 4–0 list leans heavily toward the control side of the spectrum:

White-blue midrange decks will be well-poised in this week's events. Their Delver matchup isn't stellar, but they make up for that weakness with excellent matchups against the non-blue decks. Consecrated Sphinx decks seem particularly well-positioned for the coming weekend.

Black-red-green decks have an incredible, aggressive game plan against the Innistrad Block Constructed metagame. Cards like Falkenrath Aristocrat, Huntmaster of the Fells, and Wolfir Silverheart assure that you'll have a huge presence on the battlefield regardless of the matchup. Efficient removal like Devil's Play, Bonfire of the Damned, Sever the Bloodline, Tragic Slip, and the versatile Garruk Relentless give you an excellent game against other creature strategies. Cards like Borderland Ranger and Abundant Growth fix the deck's mana. Borderland Ranger serves double duty by providing valuable card advantage.

Gamma_Frog played this well-tuned version of the deck to an undefeated record last Saturday:

This is certainly the deck to beat when battling Innistrad Block Constructed on Magic Online. Players in the know have cut copies of cards like Garruk Relentless and have geared their lists for mirror matches. The black-red-green mirror match is interactive and strongly dependent on your build. Expect black-red-green strategies to continue putting up the best results in this week's Block Constructed events.

The Modern metagame on Magic Online is healthy and diverse. No single archetype managed to make more than one 4–0 in last Saturday's daily events. Let's take a look at the breakdown:

The format is diverse and healthy, even with a Grand Prix in the books. White Weenie, Splinter Twin Combo, Artifact Aggro, and Jund have all been around forever. The latest version of White-Blue Aggro Control plays some of the format's most powerful spells and seems well-positioned to become the deck to beat.

Let's take a look at Daisonman's 4–0 decklist from last Saturday:

This is exactly the kind of deck you want to be playing in an unknown/open format. All the deck's spells are powerful and there's enough disruption to defeat even the trickiest of combo decks. The deck seems well-positioned against creatures and combo. As usual, we can expect great things from the latest white-blue deck.

It's always exciting when no storm decks have untarnished records. The latest iteration of the Blue Pauper deck is especially strong. It uses the tested and approved strategy of casting Delver of Secrets, flipping it, and following it up with strong disruption and tempo. The deck takes other Delver of Secrets strategies into consideration with an excellent trump card, Spire Golem.

GGman's 4–0 Blue Pauper deck is pretty awesome, check it out:

I hope Pauper continues being diverse, but I believe storm strategies will continue to be the best way to approach the format.

Be sure to tune in next week to see how the Magic Online metagame is evolving. Will Delver decks reassert their dominance, or will the abundance of hate in the format force players to go a more controlling route with their white-blue decks? Will Block Constructed continue to be dominated by black-red-green decks, or will players take advantage of the format's current homogenous state?

Knowledge of the metagame is one of the most valuable cogs in a successful Magic-playing machine. This column should provide readers with an in-depth understanding of each format from week to week.