First Look at the Return

his past weekend showed us our first look at Standard with Return to Ravnica cards... and that first outing did not disappoint. One of the hallmarks of the original Ravnica: City of Guilds was a prevailing "Tier-Two Metagame." That is, a format where many playable cards were of comparable level (rather than being defined by a small number of defining cards), which led to a wide variety of viable deck types.

Todd Anderson continued his StarCityGames Open Series hot streak with a win at the inaugural Return to Ravnica Standard Open. And his weapon of choice? Something a bit off the radar in terms of the initial chatter around Golgari, Zombies, and so on: "All-American" (RWU) Control

Todd's deck runs on two basic systems—miracles and Planeswalker control. The miracles side is pretty familiar for those paying attention since Pro Tour Avacyn Restored: Hallelujah! Flip over an early Entreat the Angels and it is bad times for almost any opponent. A stack of undercosted 4/4 fliers can certainly race!

Terminus was good enough to help Alexander Hayne win some months back, and it continues to be a strong contributor as the Wrath of God of choice (especially as we are now absent Day of Judgment in Standard). Terminus's clause putting victim creatures on the bottom of a deck (rather than the graveyard) is of particular interest in the current Standard, as two of the initial deck options—Zombies and Reanimator—really don't mind having a creature down there... Zombies likes Gravecrawler there (where it has essentially no drawback) and Geralf's Messenger (with its undying); Reanimator, of course, wouldn't necessarily mind one more go around with Unburial Rites... a Reanimator opponent might in fact have an Unburial Rites waiting.

Todd's is kind of a combo big-spell deck and creature removal deck, what with nearly one-third dedicated removal spells main deck (and only the two Syncopates for control-control). Anderson chose particular removal cards at that! Pillar of Flame is problems for a Gravecrawler and at least challenges Lotleth Troll to a game of chicken. Both Tamiyo and Jace can blunt the attack, and can prove especially useful going "infinite" with Pillar of Flame.

Todd's deck wins by either a powerful Angels rush or overwhelming card advantage. It has the haymaker, luck-harnessing power of the miracles mechanic... combined with the grinding ability to exhaust the opponent's resources via Jace, Architect of Thought and Tamiyo, the Moon Sage. This Planeswalker tag team has been likened to "Batman and Robin," blunting the opponent's attack and locking down his or her best threat while leveling up one or both Planeswalkers.

The Cincinnati Open featured a number of Jund-colored decks. To wit:

Nolen's deck is the more aggressive of the two, opening up with second-turn Strangleroot Geist and plugging the turn-three mana holes with Wolfir Avenger; West's deck is the more midrange, focusing on attrition and progressive card advantage. West's features Borderland Ranger as a two-for-one and the Phyrexian Arena-like Underworld Connections as a source of card advantage main.

Both decks are thick with removal, agreeing on Pillar of Flame and Sever the Bloodline (which, if you didn't already notice, puts creatures like Strangleroot Geist and Gravecrawler on special notice)... West has more where those came from.

Classic midrange decks; these looks at Jund illustrate a type of deck that can do more than one thing.

The pre-tournament favorites, Zombies came in several different varieties in Cincinnati. Riding the power of new cards like Lotleth Troll (called a Troll, but apparently also a Zombie... check out the one-two punch with Gravecrawler!) or existing synergies like Blood Artist + Falkenrath Aristocrat, Zombies in some stripe will likely cement itself as the top beatdown strategy of the coming age.

1 Bonfire of the Damned 1 Dreadbore

While Forsberg's deck is a Jund variant by colors, I chose to group it with the Zombies decks as it shares much more strategically with those decks than the Farseek-into-Thragtusk crowd.

Forsberg's version took advantage of new cards like Dreg Mangler and Lotleth Troll but also setup into Falkenrath Aristocrat... which is an outstanding offensive curve, especially given the haste and the three- and four-spots!

If I had to guess ahead of time, I would have hazarded that the Golgari version of Zombies would settle into being the most popular when the dust settles.

Caskey starts on Rakdos Cackler as a redundant 2-power one-drop (buddy buddy with fellow non-defenders Diregraf Ghoul and Gravecrawler), then follows up with new cards Lotleth Troll and Dreg Mangler.

Although this build doesn't go into the Falkenrath Aristocrat-punch mode, it gets a lot of additional mileage out of its little guys via Rancor.

Black-Red Zombies is still alive and kicking (if zombies can be said to be "alive"). Super redundant offense at the one, chaining up to the heavy-hitting Falkenrath Aristocrat for big damage. The synergies with cards like Gravecrawler and Geralf's Messenger are unambiguous.

Bernal went with a relatively heavy burn component, including Bump in the Night, Searing Spear, and Brimstone Volley to close out games even outside of the red zone.

Weidinger's Reanimator deck is almost a hybrid deck. It has a reasonable "play fair" branch that can just play out Centaur Healer for a strong (defensive) creature on curve, manage the board with Lingering Souls, and eventually play Thragtusk on the five. Win on the merits of card quality.

But in addition to the potential for fair play, this Reanimator has a very powerful combo-like way to play. Grisly Salvage or Mulch on the second turn can dump a big creature—and maybe even an Unburial Rites depending on how lucky you are—into the graveyard. You will want that card to be Angel of Serenity in all likelihood, but a 7/7 flying Necropotence or even a "lowly" Thragtusk would be fine.

Your one big threat can now challenge to take control of the game. Any of Angel of Serenity, Griselbrand, or Thragtusk can have a huge effect on the battlefield, whether by eliminating threats or gaining life while producing a large board presence. And in the case of Thragtusk especially, trading, getting token + lifegain value, and then reanimating again makes for a more layered path to success than just playing a five on five.

Elderscale Wurm isn't a Return to Ravnica new card... but it is still pretty new. Essentially a one-card Worship that also clocks the opponent with a trampling 7/7 creature. If memory serves, this Reanimator build is the first performing list to exploit this weapon.

Kauffman runs great creatures and bolsters them with acceleration... an age-old strategy that is no less awesome with today's offensive crop of Silverblade Paladin, Sublime Archangel, and Wolfir Silverheart.

I mean, just imagine those three creatures chaining into one another starting on turn three...

Paladin is now coming in double-exalted?

What about pairing Sublime Archangel (soon-to-be triple exalted) with Wolfir Silverheart as well? Hugely soulbonded... exalted-exalted-exalted... and then double strike? Can you even count that high?

Rancor can make even a lowly Arbor Elf into a significant powerhouse. 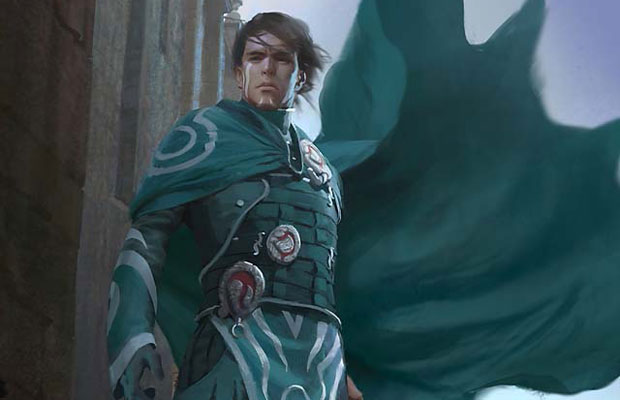 If this first event tells us anything, it is that there are tons of different strategies you can play. There are tons of beatdown options, from Selesnya to a pile of different Zombies; the first big winner was control, but when you consider the Reanimator deck... there is even a kind of combo to be looked at.

With the State Championships on the horizon this weekend...

What will be your weapon of choice?