"The reports of my death are greatly exaggerated."
-Mark Twain Mistbind Clique

he record-breaking Grand Prix in Seattle this past weekend showed a very different Top 8 than the previous week's. Brazilian standout Paulo Vitor Damo Da Rosa ran back-to-back Grand Prix Top 8s, but this time with essentially the opposite deck from his Cascade Swans that was so successful in Barcelona. Luis Scott-Vargas also thought better of Bloodbraid Elf-into-Seismic Assault, and this time was rewarded with what has become an almost expected level of success for him.

At the end of the day; well, almost the end of Sunday, five Faeries decks had graduated to the Top 8 of the tournament: PV, LSV, local hero Ari Lax, Nicolay Potovin, and Benjamin Lundquist. This represents a 180-degree reversal on the attitude towards the once-boogeyman of a half-a-dozen formats. Just a few weeks ago, around the time of US Regionals, it seemed like no one was crazy enough to come near Faeries. But this past weekend? The First Among Equals were again dominating the Top 8, taking more than half the positions and challenging for the Grand Prix title.

"I think last week's deck that won is a joke." -former Player of the Year Tomoharu Saito.

Cascade Swans – the deck we featured heavily last week – was one of the most metagame-warping decks in the history of Magic. Overnight it overtook and up-ended the format that had – to that point – been running on Windbrisk Heights and Spectral Processions. Decks without real disruption, or decks with difficulty racing a near-infinite combo deck that can win on turn four – were extincted, if temporarily. Players opting for the solid brick foundations of a Jund Mana Ramp opted to get fancy with Thought Hemorrhage, and permanents from Pithing Needle (aka Gom Jabbar) to Runed Halo flirted with the Cascade Swans innovation of main-deck Deny Reality. One of the cool things I heard from Phil Napoli was about sideboarding a quartet of Aura of Silence in his G/W deck; Phil pointed out that even against a Deny Realitythe Cascade resolves first... so an Aura of Silence can lock out or wipe away the Seismic Assault before the overcosted Boomerang even finishes resolving!

While its effectiveness – and in our opinion coolness factor – could not be exaggerated initially, Saito believes that soon no one will be playing Cascade Swans. One reason can be inferred from the performance of Faeries this past week.

In terms of business spells, Cascade Swans has really just got Seismic Assault. Bloodbraid Elf is... Bloodbraid Elf (and we'll get to thirty-two of those in just a few minutes), but Swans of Bryn Argoll by itself might actually be worse than a regular four-power flying creature when pulled away from the combo context; when you're not flipping lethal lands in bundles of ten or more, you might accidentally be handing the other guy a "personal" Howling Mine.

Even appearing in the context of a cascade spell, just having Seismic Assault at least arguably reduces that spell to a target for a deck like Faeries. No respectable deck is going to lose just to a 3/2 creature. When it serves as the harbinger of a Seismic Assault, the Broken Ambitions, Cryptic Commands, and in most cases Spellstutter Sprites of the Fae can be bent to essentially four cards across the table. When you add in main deck and sideboard Thoughtseize, plus the possibility of a hand-warping Vendilion Clique (which itself is a clock) or a Mistbind CliqueTime Walk (which itself is a heck of a clock), Fae becomes more and more attractive for the match-up.

With Swans (which we've said seemed like a short-term Warp World applied to an entire format) itself skyrocketing while reducing the popularity of the kinds of strategies that were initially horning in on Faerie viability (plus the little blue gals' utter lock against anti-tokens strategies like the Fog Deck)... Well, all that put together is a recipe for five Fae in a Grand Prix Top 8.

One of the things you can tell about a strong deck position is how aware it is of not just its own justification in the metagame, but the simultaneous awareness of what is going on around it. Look at the decks played by LSV, PV, and Lax: All played main-deck Peppersmoke. Peppersmoke is okay at suppressing a Spectral Procession + Windbrisk Heights two-card combo (because two tokens does not a Hideaway make), but it really shines against another Faeries deck.

We've said it before, and we'll say it again: No matter what you say about Faeries' viability (or lack thereof) in a format, no other sixty is capable of its first four turns: 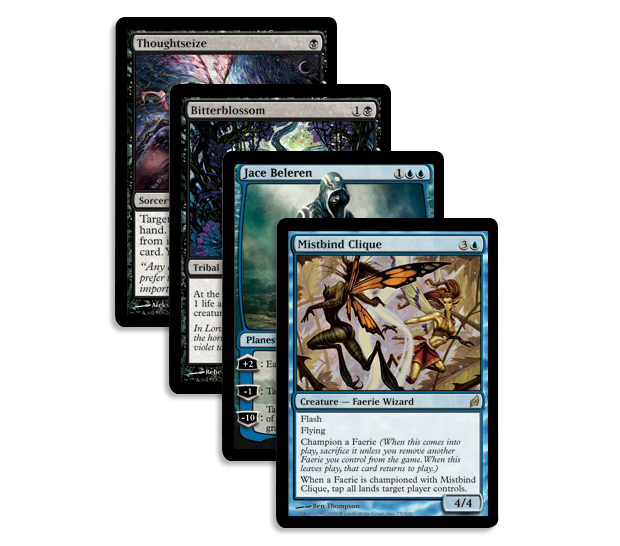 ... Painful to get out, maybe, but utterly dominating on card advantage and card quality.

How Charles Gerndon Dupont ended up with this deck is arguably a more interesting story than the deck itself... But we'll leave that to The Week That Was.

For our purposes, we will simply point out that a deck like this one seems very well suited to the present metagame (or at least a version with a declining percentage of B/W Tokens decks). Personally I love a Blightning, and I love a Demigod of Revenge, but Dupont's deck didn't play either. To some degree the presence of Anathemancer reduces the necessity of alternate threats; Anathemancer is just that good. Topdeck it in the same spot that you would have previously brained the bad guy with a Demigod of Revenge and you will – for less mana – probably deal the same amount of damage to him that turn... And you didn't have to have

Pithing Needle and Terminate don't deal any damage, but both cards are more effective against Seismic Assault and Swans of Bryn Argoll (respectively) than the resistance you would typically see in a deck like this one. Thought Hemorrhage is a bit of a gamble because it is roughly the same speed as the Swans of Bryn Argoll deck's kill, but if you hit it, all their Seismic Assaults will go away, and Swans will be in the position of trying to win with just some 3/2 creatures.

It should probably go without saying that a deck like Dupont's only gets better as Faeries gets more popular. Red Decks almost couldn't lose to the popular Faeries in Lorwyn Block Constructed, and the addition of Volcanic Fallout makes the strategy even more sound against everything but the big Cliques... And that's what Terminate is for.

Five-color Blood is arguably the most interesting deck in the Top 8 if you haven't seen it before. An evolution of Reflecting Pool Control, Five-color Blood is much less "controlling" ... the only permission spell is Cryptic Command. Its reliance on cascade cards makes purely reactive, low mana, cards like you will typically see out of a deck like Faeries or traditional Reflecting Pool Control (Broken Ambitions, Negate, and Remove Soul) too much of a liability. Bloodbraid Elf, flipping... Negate? Sorry, wrong number.

Bloodbraid Elf is the card that makes this deck go. There are various spells of varying sexiness that it can flip over. A Volcanic Fallout is cute... and might not work the way you think it works. When you flip Volcanic Fallout on a Bloodbraid Elf, you have the option to sweep all the opponent's Faeries before the Bloodbraid Elf joins the board. It hits the table only after everyone has taken two, meaning that the Elf, itself, is in no immediate danger. 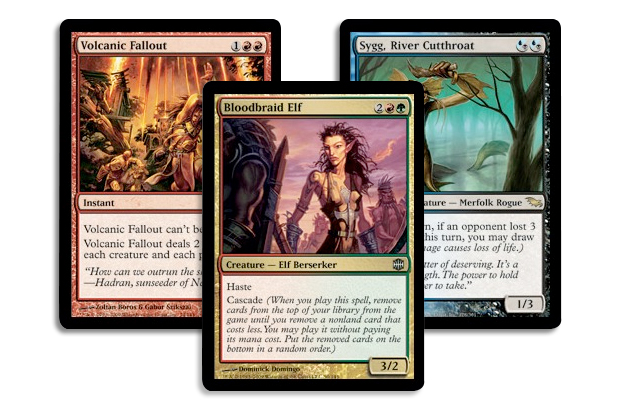 New addition Sygg, River Cutthroat is pretty cool. When Bloodbraid Elf flips Sygg, then gets in for three points of haste damage... That is like a personal Howling Mine! Card advantage into more card advantage.

Jund Charm looks pretty queer if you don't know what it does and why it is there. Of course Jund Charm is a powerful sweeper, effective against Faeries and Tokens. You can un-Persist a Kitchen Finks with its +1/+1 counters (or just make any of your potential attackers bigger and scarier). But the most important effect – for a deck like this one, anyway, with its 23 or so non-basic lands – is the Tormod's Crypt wannabe effect. While Five-color Blood plays Anathemancer, the deck itself is one of the most vulnerable decks in the entire field, meat for opposing Anathemancers. In an effort to not take 100 damage, Jund Charm can, subtly, remove all the Anathemancers from the opponent's graveyard so that the Blood doesn't die on the spot when the opponent draws enough mana to play Unearth.

Unlike the purely controlling decks of the past, this one – despite its seemingly incongruous 26 lands – is capable of quite the beatdown draw.

That kind of damage adds up! 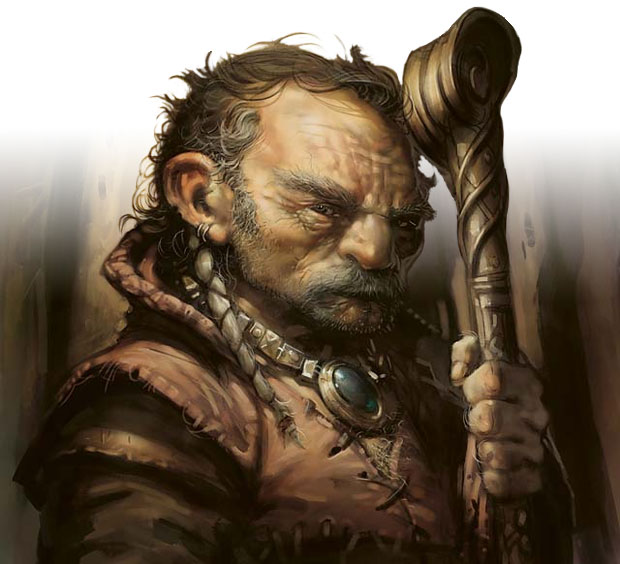 Which brings us to the second coming of Gaddock Teeg. When Gaddock Teeg first hit the scene with Lorwyn, he threatened to be one of the most dangerous offensive/disruptive creatures ever, perhaps out-Pikula-ing Meddling Mage. Control players quaked in their boots. How could they do... anything? But then cards like Firespout appeared and control became more viable (Wrath of God was not being pre-empted by Gaddock Teeg any more, and players moved to the Quick'N'Toast-style of control).

But time passed and everyone got complacent. A combo deck like Swans -- which relies on spells like Captured Sunlight at times – came up, and all of a sudden anyone running Gaddock Teeg looks like a genius again.

If you haven't checked out the coverage, I direct you to the finals match, where our eventual champion squared off against one of my favorite players, beatdown Benjamin Lundquist. In a remarkable display of bad followed by good fortune, Massicard shipped mulligans all the way down to four cards in his opening hand (bad fortune)... but luckily for him, his two-drop was a certain Kithkin Advisor.

Ben had kept multiple Broken Ambitions and Cryptic Command, but had incorrectly lost the flip, so had to go second. Gaddock Teeg hit the board and essentially blanked Ben for all. Qasali Pridemage then Wilt-Leaf Liege were all the kick-wham-stunner Massicard needed to take the first game, along the way to his title.

Now I don't know if you realized it yet, but starting tomorrow is this year's Pro Tour Honolulu. Unfortunately I won't be there to call the equivalent of this year's $16,000 Lightning Helix, but I figured that we would do at least a preliminary overview of the format to help you enjoy the coverage starting tomorrow.

Perhaps you would consider looking at this Top 8 from the Magic Online Championship Series Season 2 Championship...