We can make a stack of comparisons and talk about costs and limitations, talk about why "Swamps Matter," and speculate as to effective decks...

But we don't have to: Mutilate is a reprint. 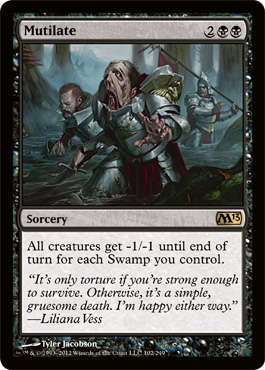 It was outstanding from the moment it was printed, proved a dominant force in Odyssey Block Constructed, relevant in Standard, and was heavily played as long as it was legal.

Because of its structural limitations (fairly expensive as well as useful essentially only in a deck with lots of Swamps) Mutilate contributed primarily to bomb-laden and ponderous Mono-Black Control decks. Hall of Famer Rob Dougherty continued a then-run as the best deck designer on the planet (plus finished third at the Odyssey Block Pro Tour!) with this build: 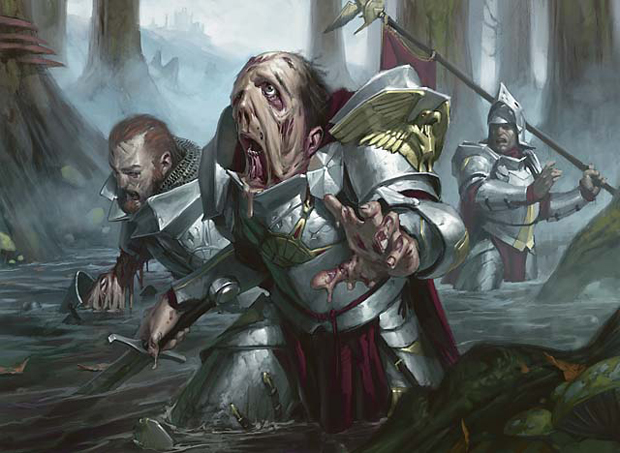 The main reason I make mention of Rob's deck is the extreme number of lands: Twenty-eight lands! Twenty-five of which are Swamps! When your cards—like five-mana Mind Sludge in addition to four-mana Mutilate—are both expensive and heavily dependent on how many Swamps you have in play, you have to play a ton of lands (and in particular Swamps) to get a reasonable return out of them.

Here are some guidelines (some obvious) for playing Mutilate in upcoming tournaments:

1: If You Are Going to Break (or Even Just Bend) Mutilate, You Have to Play a Bunch of Swamps

I told you some were obvious!

Corollary Question: Is there a way to turn playing a lot of Swamps from a restriction into an asset?

Not long ago, R&D member, scholar, Southern gentleman, and Huffington Post and The Believer contributor Zac Hill shared a new and exciting card-advantage machine: Liliana of the Dark Realms: 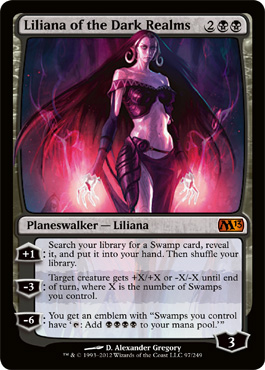 Well, not only does Liliana of the Dark Realms go and get you the Swamps you need to make Mutilate mega-good at killing lots of little guys, her card advantage engine only works if your deck is full of the Swamps that, you know, make both Liliana and Mutilate effective.

Now I don't know what will and what won't be in Magic 2013, but I do know there have been lots of interesting "Swamps Matter" cards that have been useful contributors to Constructed formats past. We already made mention of Rob's Mind Sludges (you probably don't want to have one of these pointed at you without a Mana Leak or Dissipate in hand), but cards like Tendrils of Corruption (awesome defensive instant) and Corrupt itself have helped make Mono-Black Control decks competitive against both beatdown and control in times past.

2: No One Ever Said They Had to Be "Basic" Swamps

This past Monday, new boss in Dominaria Renton, WA, Trick Jarrett, showed us the nonbasic lands we are going to be playing with, core set-style, for the next twelve months. Yep, Drowned Catacomb and Dragonskull Summit... again.

And there is nothing wrong with Drowned Catacomb and Dragonskull Summit! They are very good and I personally have pocketed a Blue Envelope with them in my sixty.

This cycle of lands might actually be the "perfect" core set nonbasics. The only reason I make mention here is that given Liliana of the Dark Realms, certain parties were speculating on the return of the Ravnica Block "dual lands" (Godless Shrine, Watery Grave, Blood Crypt, and Overgrown Tomb in black). They are similar to the Magic 2013 cycle in that they hit the battlefield tapped (except sometimes) but are themselves all Swamps (or Plains, Islands, Mountains, or Forests).

You can get one of these with a Verdant Catacombs or search one up with Liliana of the Dark Realms. And yes, Mutilate will count a Watery Grave when it is deciding how much creature butt to kick upon resolution.

Now, on the subject of counting for butt-kicking...

3: Mutilate is Just One More Way to Humiliate Thrun, the Last Troll

Thrun's agent really got every possible thing wrong, didn't he?

When Thrun first came out, it was all movie posters and flashing neon signs. "How will you deal with Thrun?" The question was a clarion call, a rallying cry across Standard, and a point of pride for green mages. 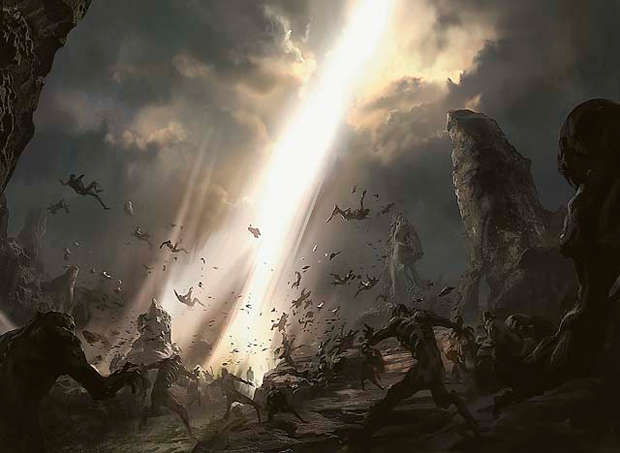 You can't counter it and once it's in play (and since we now have Day of Judgment instead of Wrath of God) you can't destroy it, or even target it! Thrun!

Well it turns out you don't have to counter or destroy Thrun if you can just put a sequence of 1/1 Squadron Hawks in front of it as 16 points of speed bump. Or maybe you don't have to kill Thrun if you can just race it with Sword of Feast and Famine (not like Thrun can block a protection-from-green swordmaster). In the following months and years we saw Timely Reinforcements, Phyrexian Metamorph, Phantasmal Image. Most recently, Terminus gave white control decks a Wrath of God variant that once again could foil regeneration.

What would a new set be without yet another indignity for the so-called Last Troll? At four mana (presumably four Swamps), you can answer Thrun straight up—but in all likelihood, a green deck is going to have more guys, so your Mutilate will not only get the powerful legendary Troll but maybe a Birds of Paradise or other helper as well.

And later in the game?

You can have, say, fourteen Swamps in play (remember, Rob played twenty-five) and tap four of them to deal with, say, a Blightsteel Colossus. That's right: Mutilate can take out even an indestructible creature. A little more realistic of a situation? You're up against Tempered Steel and the opponent has an Etched Champion that in another circumstance would kill you to death?

So Mutilate can kill creatures that a Day of Judgment might not be able to, including the ones that aren't supposed to be able to die. You've got to have access to a lot of Swamps, but the tools (in particular powered by Liliana of the Dark Realms) are there. 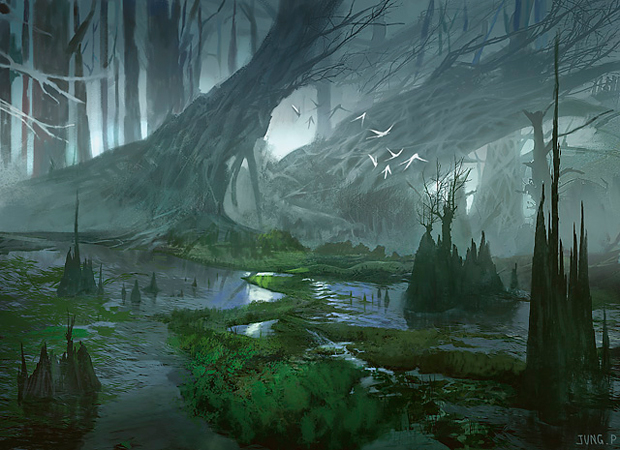 At the same time, Mutilate is not "as good" as quickly. There are decks that have benefitted from a "Signet" of some stripe (Azorius Signet, Everflowing Chalice) and laid down a Wrath of God or Day of Judgment on the third turn. An "accelerated" Mutilate might "just" give you -3/-3 (which might be just fine against the creatures that hit the 'field over the first three turns) but it's important to realize the distinction against effects that truly and (less) conditionally smash animals. Later in the game, some version of this guideline is also true. If you're shy for lands, your Mutilate is going to suffer with the rest of your game. Limping along, barely scraping by? Your Mutilate is going to be less effective than you might like.

And even with his twenty-eight lands, Rob played "only" three Cabal Coffers. Why?

But most of the time, I'm guessing you will still be able to kick Thrun down the stairs.

4: Mutilate is Going to Give Players Something New to Do

Most of the decks in Standard are snowballs rolled together on the backs of basic synergies. Delver of Secrets and Snapcaster Mage are cheap creatures that get along well with a large number of cheap instants and sorceries; the details can go in all different directions. Runechanter's Pikealso gets along well with lots of instants and sorceries! Well, Inkmoth Nexus goes well with Runechanter's Pike! Thought Scour is a cheap instant (good with Runechanter's Pike and Snapcaster Mage... also good with Moorland Haunt and sometimes Lingering Souls!). 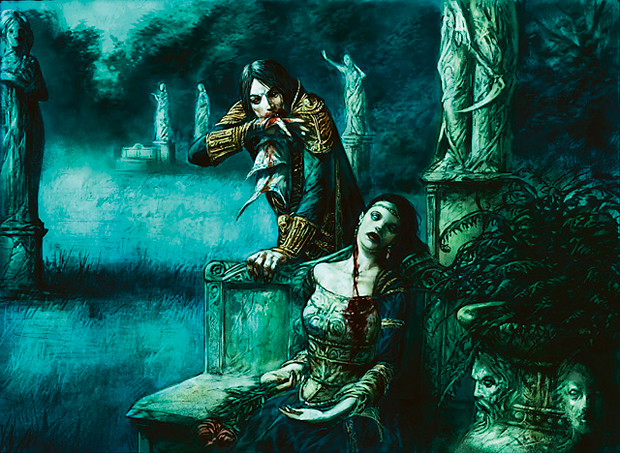 The details change but the cores and kernels of the decks we know and love (and hate) and play are based on obvious synergies of color and capability.

Mutilate might be poised to give us another framework. There are some incentives to Mycosynth Wellspring (as a draw-smoother and Swamp-fetcher) that might become strong incentives if we can combine with the powerhouse Swamp-fetching double-underline of Liliana of the Dark Realms. Mutilate obviously helps you profit from these synergies and redundancies, and helps you live long enough to take advantage of them. The presence of cheap removal in Tragic Slip, Doom Blade, Go for the Throat, Victim of Night, and on up to Tribute to Hunger (again to humiliate Thrun)—and now Liliana—give you the breathing room you need to set up the powerhouse fours, which in turn buy time for each other.

It's kind of the converse of the question many players were asking around Pro Tour Paris last year... We've had Stoneforge Mystic as long as we've had Jace, the Mind Sculptor—Squadron Hawk since the summer. Why didn't anyone put Caw-Blade together before?

The answer, of course, was that the kernel of the deck—in Sword of Feast and Famine—hadn't been completed yet. All those players who love their Mono-Black Control decks at your FNM? Mutilate might be the missing link they need to step up to the dominating Delvers and rampant Wolf Run Ramps.

5: And After All That... Mutilate Might Still Surprise You!

We have characterized Mutilate primarily as a Mono-Black (or at least heavy Swamps) Control card. But there is no reason it has to be strictly positioned in the defensive/sit-there camp.

The last time Mutilate was legal we didn't have free re-buys like Gravecrawler, and no one would have envisioned untapping on your fourth turn, challenging the opponent with a 3-swing from Geralf's Messenger...

... and then leaving a board that only featured a bigger Messenger (with Gravecrawler waiting for a next-turn setup, presumably).

It might not surprise you if you have set your Zombies up to take advantage of it, but it will probably surprise them. Symmetrical sweep seems a lot less symmetrical when you not only control the disposition of the battlefield when it hits, but are also getting your guys back.

It will take some dedication (no surprise there), but I am pretty sure Mutilate is going to be a hit.