uch of the rest of the site is seemingly caught in the grips of the Magic: The Gathering Commander release this Friday (some of those cards are pretty cool!), but we here at Top Decks are concerned, per usual, with tournament Magic results.

As with many of you, I am anxiously awaiting the possible news that will come out next week RE: potential Standard bannings; these seem imminent, especially considering the not-ambiguous social communications of our beloved Magic boss: 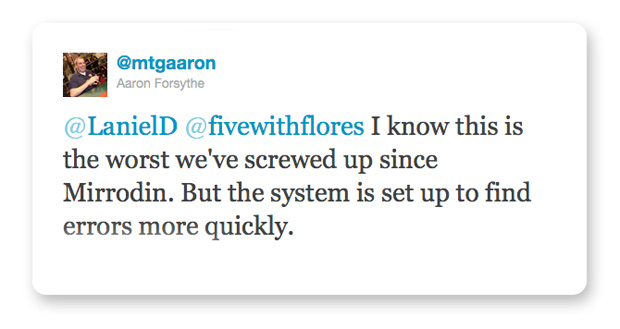 The sentiment among many players is that Caw-Blade has reached "Affinity" levels. Most of you know that I actually like this format and don't see a huge problem around Caw-Blade or its primary weapons, Jace, the Mind Sculptor and Stoneforge Mystic, but it is hard to argue the success that the deck has had since its inaugural Pro Tour win in the hands of Ben Stark back in Paris. 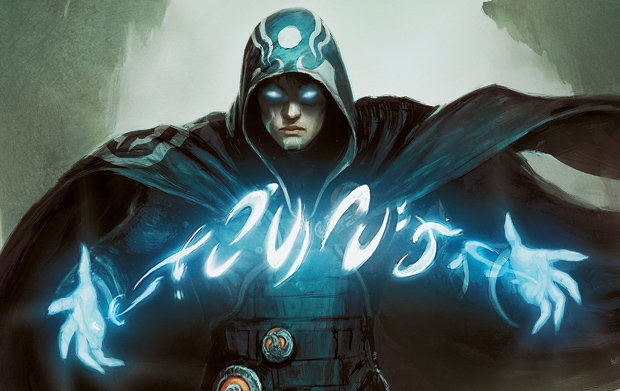 That said, I claimed a few weeks ago that the "Age of Caw-Blade" is done, and despite some continued success (e.g., PV's win in the recent Grand Prix), the deck's stranglehold seems to have loosened up. Consider the Top 8 of the most recent Star City Games Standard Open in Denver, Colorado:

Not only did Caw-Blade fail to take 50% of the Top 8, but Brandon Montoya (Open Champion, with Vampires) and Jason Bulkowski (Red Deck) kept Caw-Blade out of the finals! Unprecedented! (Well, not really, but it's still pretty refreshing considering the last couple of months.)

1) So What's Going on with Vampires?

Vampires continues to succeed (with back-to-back Star City Standard Open wins) at least in part due to Caw-Blade's being optimized to beat Caw-Blade. The original Caw-Blade decks ran cards like Sylvok Lifestaff to keep pace with beatdown, as well as the full four copies of Day of Judgment to take on all comers, including little beaters. Of the three Caw-Blade variants to make the Denver Top 8, none of them played more than two copies of Day of Judgment, and only one of the three decks played Day of Judgment main deck.

While Gideon Jura is creeping back into deck lists, the reality is that so long as Caw-Blade is optimized to beat Caw-Blade, decks like Vampires can take advantage not only of the lack of particular defenses, but the giant glowing neon targets that the strategy presents. 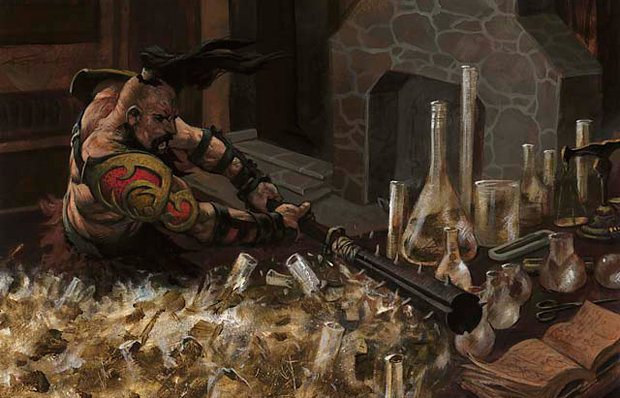 4 Koth of the Hammer 2 Leyline of Punishment
51 Cards

Bulkowski and Pallesen succeeded with a bit of a different deck than Red Deck mastermind Patrick Sullivan used at the Invitational a few weeks back. While the Rainmaker invented a low land count and put Furnace Scamp on the front page, Jason and Johnathan went with an older model with 24 lands and Koth of the Hammer.

Among new cards, Shrine of Burning Rage has cemented itself as a red-deck staple, and Ember Hauler continues to keep Kargan Dragonlord out of its once secure two-spot.

2) How Does the Red Deck Interact with the Caw-Blade Metagame?

For all of Caw-Blade's virtues, the strategy has a fairly basic weakness: It can largely be boiled down to a deck with about eight small guys trying to pick up one piece of equipment and quite literally "run with it."

Ignoring newcomer Shrine of Burning Rage, the standard Standard red deck plays Burst Lightning, Lightning Bolt, Searing Blaze, and Staggershock... not to mention the ability on Ember Hauler. So, basically a 2-1 edge over Caw-Blade in terms of "efficient removal" versus "little guy" counts.

Not only can red decks get the beats on with first turn Goblin Guides getting in there, but when Caw-Blade has to devote two to four mana at sorcery speed to get a piece of Equipment into position, the deck is basically leaving itself wide open to a removal spell and a massive tempo swing.

But what about Batterskull? 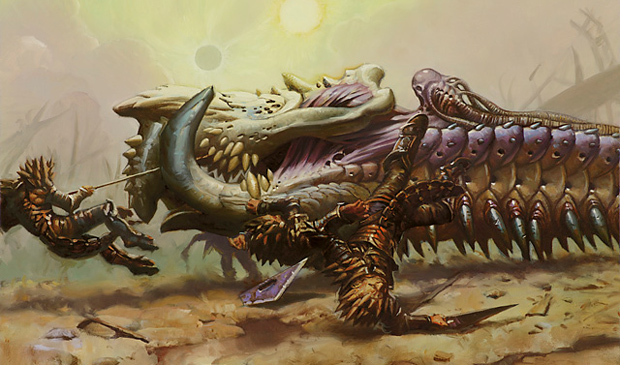 For sure Batterskull and its lifelink can be an issue for a deck full of burn spells, but don't forget that if you kill the Stoneforge Mystic, all of a sudden Caw-Blade has to play fairly and run out Batterskull at the full five mana. Burst Lightning for five mana deals with a 4/4 living weapon nicely, thank you; Red Deck can get in there with little guys and maybe a Teetering Peaks, just so.

And from the PTQ winners...

Alex played largely my deck from New York, albeit with a much different sideboard. The point (for this point) is that he kept the quintet of Pilgrim's Eye and Sea Gate Oracle. So... 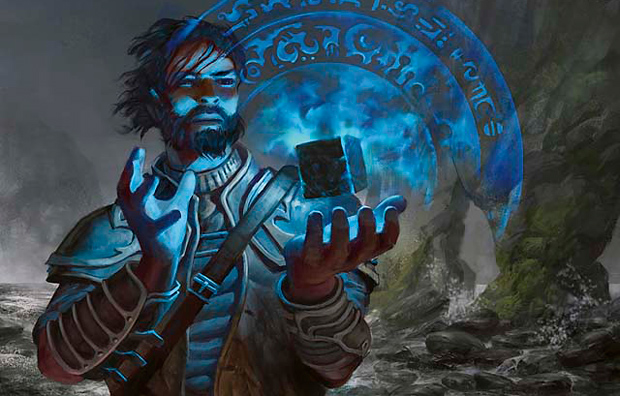 While the biggest eyebrow-raiser in this deck is Pilgrim's Eye, running a close second is brother three-drop Sea Gate Oracle.

I actually borrowed the card from an extended Pestermite deck with some input from Patrick Chapin; Sea Gate Oracle is a fairly intuitive addition in Standard if you consider two things: 1) sometimes you have a Splinter Twin, or a spare Splinter Twin, but for some reason can't go for the win (for example, you have no Deceiver Exarch); in these cases, Sea Gate Oracle can play "bad Jace," and better yet, a Jace that can attack (someone else's Jace), defend, and of course just dig. 2) When you have the most powerful strategy (that is, infinite damage potentially on turn four) in a format where such fast kills are absent from most other decks, maximizing the consistency and redundancy of your deck is pretty attractive.

Sea Gate Oracle is particularly effective in a metagame with the rising Vampires. A 1/3 body in a world of Pulse Trackers and Bloodghasts (I mean, which deck has a good answer to Bloodghast?) is very attractive.

Domi's is a completely different take on the colors and combo.

Instead of going with the RUG shell, Bjorn played a Fauna Shaman shell. His deck has a Vengevine engine, and the second- and third-best two-drops in the format as redundant turn-two plays.

Neither Fauna Shaman nor Lotus Cobra is quite a Stoneforge Mystic in the present format, but either one is a potential problem. Both of them offer explosive possibilities, from a raging stream of 4/3 Elementals to the threat of a third-turn Frost Titan. 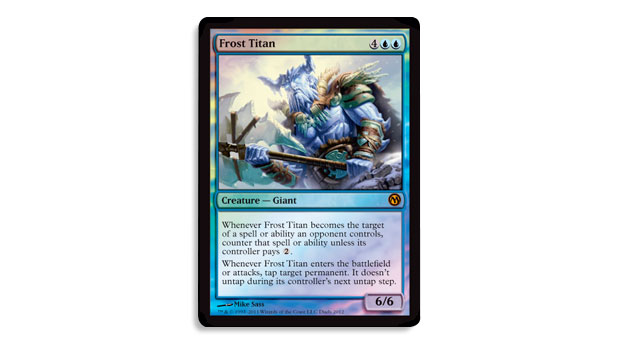 At the same time, we have the possibility of a Deceiver Exarch... out of nowhere. The notion of Vengevine-into-Vengevine setting up an infinite combo is simply delicious.

Probably my favorite thing about this deck is that it plays four Splinter Twins (most hybrids and some Grixis decks run only three), and not only three Exarchs (thanks to Fauna Shaman)... but only three copies of Jace, the Mind Sculptor!

The answer is, there isn't just one answer.

However, if I were to prepare for an upcoming tournament, I would go with this style as my enemy:

That's right! The deck played by trunks132 is a 75/75 carbon copy of the Grand Prix winner piloted a week ago by Paulo Vitor Damo da Rosa.

Paulo's deck has a miser's Day of Judgment, fast removal and an extra Batterskull for red, and a Sun Titananyway. If you want to take on all comers, this is probably a good deck to do it with.

Why yes there was!

The Pro Tour Nagoya Top 8 was actually Draft, but we can run a pretend-sies on the Top 8 based on what Scars of Mirrodin Block Constructed decks each player played.

Half the Top 8 (including Champion David Sharfman) played some kind of White Weenie variants. 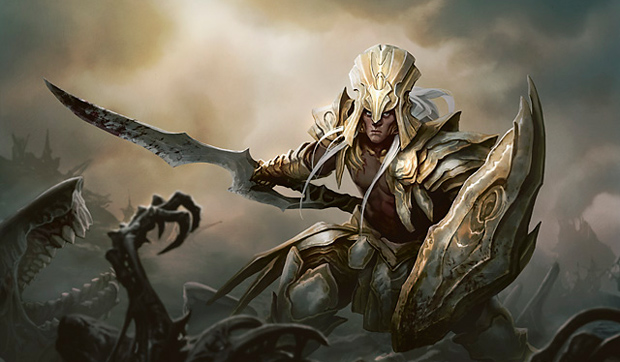 The Puresteel Paladin style of White Weenie is a metalcraft beatdown deck that takes advantage of the speed and card advantage of Puresteel Paladin. The deck plays lots of artifacts, including twelve main-deck Equipment cards that, in the presence of the Paladin, replace themselves and move around for free in most situations.

Of particular note is the choice of Swords: Cox and Sharfman ran Sword of War and Peace to the max, and to the exclusion of other available Swords, probably as part of a metagame call. Remember: half the Top 8 were White Weenie variants, and another quarter were red decks.

Pichon and LSV played Tempered Steel decks that were actually quite a bit different on the details. While both players ran Glint Hawk Idol, only one ran Glint Hawk; Scott-Vargas ran Origin Spellbomb and more lands, as well as Blade Splicer over more Vault Skirges.

Despite some differences on the details, the theme of the Tempered Steel strategy is pretty consistent: Cast lots of little artifact guys, pump them large with Tempered Steel, smash.

Dispatch is a superb tool here (and in Puresteel Paladin White Weenie, for that matter) as a kind of no-downside Swords to Plowshares. You basically always have metalcraft; you just do it. For one.

In addition to an eight-pack of battle cry beaters that work well with Kuldotha Rebirth, Kadooka ran a nice sub-theme of artifacts and profitable ways to sacrifice them.

Kuldotha Rebirth + Ichor Wellspring is obvious, but you can also draw a card from Artillerize, or run Panic Spellbomb the same way. Artillerize + Perilous Myr is probably one of the worst ways you can ever lose.

"What are you at again? Seven?"

Fabian played a midrange (yet still explosive) deck with lots of fours and a big five. Galvanic Blast is often only 2 damage in this deck, but still fast. Thiele makes up the burn count with Koth-friendly (and Sphere of the Suns–friendly) Volt Charge and takes advantage of tons of mana with Red Sun's Zenith.

It's not hard to see how the man was at one point the consensus best deck designer in the world.

There are lots of awesome things going on with this deck in the metagame, starting with Virulent Wound versus Memnite (or whatever). But the best has to be the positioning of Phyrexian Crusader in a room full of white and red decks. 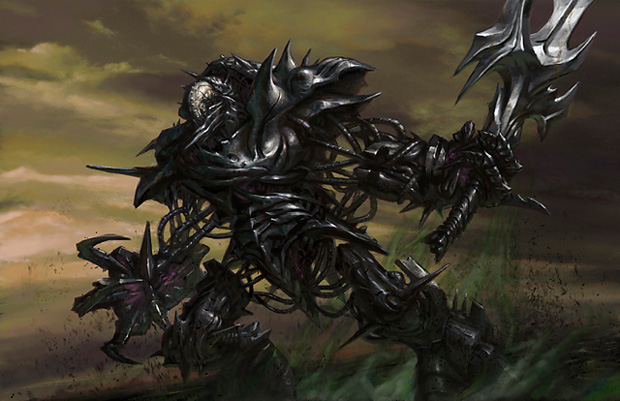 Phyrexian Crusader, untap, Piston Sledge? No one can block it. No one can remove it. Mutagenic Growth you? Wow. Just wow. 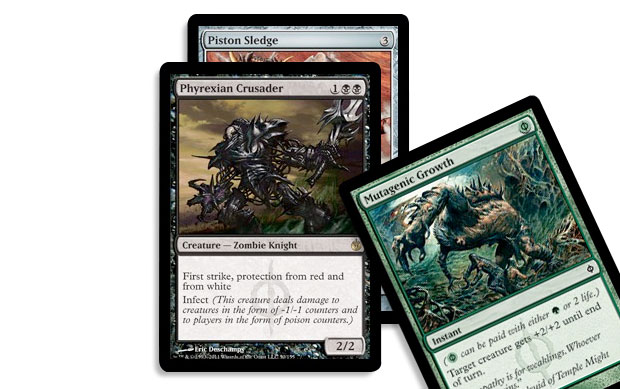 Block Constructed is often a window into future Standard formats. Especially if something happens next Monday, these decks should prove building blocks for the near future.

Congratulations to all the Nagoya standouts!