Michael Flores is the author of Deckade and The Official Miser's Guide; the designer of numerous State, Regional, Grand Prix, National, and Pro Tour–winning decks; and the onetime editor-in-chief of The Magic Dojo. He'd claim allegiance to Dimir (if such a Guild existed)… but instead will just shrug "Simic."
Share Article
Share Tweet Share
Wizards of the Coast offices are closed for the Thanksgiving holiday. Last week's article is below in case you missed it, and we'll be back with new articles on Monday, November 29!

his week I want to go over two different builds of White-Blue Control.

Like many players, I assumed White-Blue Control was, if not dead, at least severely wounded in Standard. It started off in Scars of Mirrodin Standard as a holdover from last summer ... White-Blue Control (alongside its sister-deck Red-White-Blue Planeswalkers) was a firmly tier one strategy, a fine home for "best card in Standard" contender: Jace, the Mind Sculptor.

And so, it began this season with the historical pedigree of many, many Grand Prix, Nationals, and Pro Tour Champions as its pre-existing advocates.

Remember that one of the first decks to really make its mark on Scars of Mirrodin Standard was Mono-Green Eldrazi Ramp. How does Mono-Green win, but with gigantic Eldrazi aliens / Cthulhu monsters? And over the course of a long game, these aliens / monsters / gigantic horrors of our imaginations find their collective ways to the battlefield by way of (among less spectacular routes) Eye of Ugin. 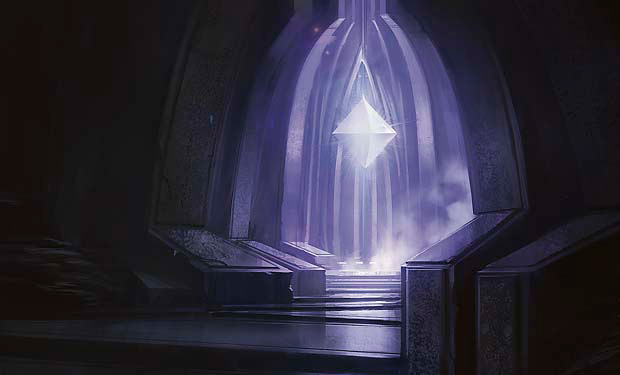 Eye of Ugin is the muscular intersection of hard-working mana source and card drawing engine. Does White-Blue Control have cards that can deal with Eye of Ugin? Sure. Um ... sometimes. 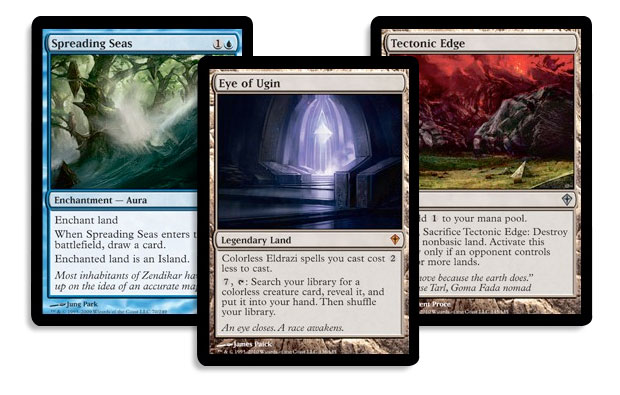 There are all kinds of tools that White-Blue Control can use to interact with Eye of Ugin. Spreading Seas was an essentially universally played Jund spoiler last summer and remains equally legal in the current Standard environment. Tectonic Edge is another answer—and a versatile option that is effective against lots of different threats (such as the devilishly handsome Creeping Tar Pit)—that can be played at a very low cost.

Of course, a wily Mono-Green player can wait to get seven other mana available before exposing Eye of Ugin to the gentle ministrations of a White-Blue mage's defensive bandolier ... and the white-blue mage might just end up with a face full of Emrakul, the Aeons Torn.

It is not, therefore a stretch to say that Mono-Green—again, the early leader in this format—might have an edge in the long game against Magic's quintessence of "the long game" deck. But the other issue is that Mono-Green (and a variety of its cousins) also has the ability to win (more or less) on the second turn.

You know, with a Summoning Trap.

None of these problems, as we will see, are insurmountable. But they're also not good news or anything for White-Blue Control, and it isn't hard to see that some writers might start seeing chinks in the White-Blue Control armor, therefore.

And then we have the rise of Blue-Black Control.

First Nick Spagnolo and his epic runs across State Championships and various traveling tournament series. Nick's Blue-Black Control represented a high-profile magazine cover series for the new/different blue control, but there were other challengers. 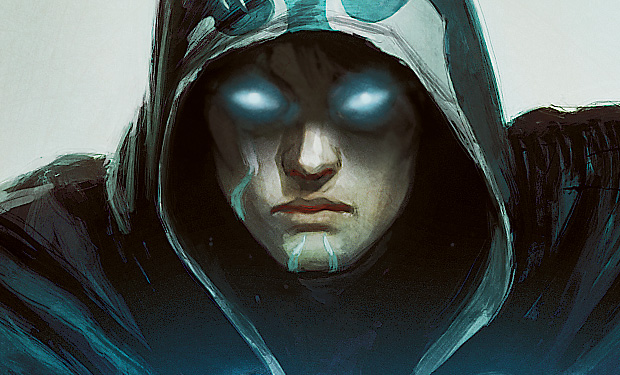 These were (are) all also blue-based Jace, the Mind Sculptor decks with different advantages. The Blue-Black decks could preempt mana acceleration with cheap and valuable disruption like Duress; big spells like Memoricide could remove all the opponent's Primeval Titans (and with them the promise of the opponent's future). 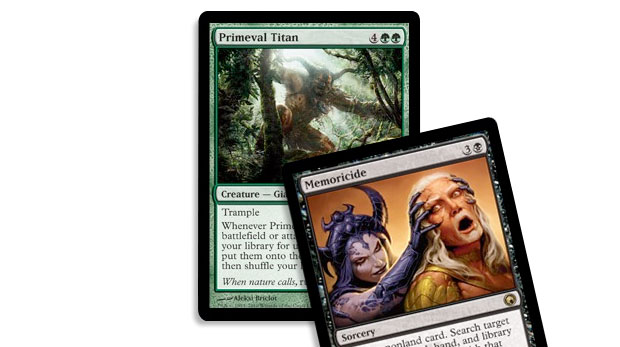 The red build could react with greater speed and consistency against beatdown decks. Lightning Bolt ... Burst Lightning ... Given the context of the Standard format, with its many Joraga Treespeakers, Lotus Cobras, Kor Outfitters, and so on, Pyroclasm represented (quite often) just a faster Day of Judgment. Plus, with Destructive Force, the Blue-Red version had a unique method of taking advantage of the 6 toughness attached to a Frost Titan, while at the same time preventing certain opponents from taking advantage of their powerhouse mana bases (locking lesser land counts out entirely).

So what brings us back to the court of White-Blue Control?

3 Jace, the Mind Sculptor 4 Day of Judgment 4 Leyline of Sanctity

At first glance, Kyle's deck is just a White-Blue Control deck. It doesn't have a proliferate sub-theme (spoilers!). Its kill cards are the ones we typically expect. But customization and very thought-out strategic planning are actually intimate to Kyle's build, even if it doesn't look that different. 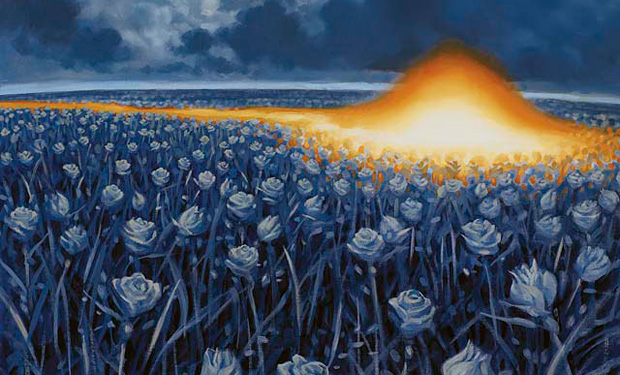 But this past weekend, on the way to winning the TCGPlayer.com WWS–Austin, he beat Valakut, the Molten Pinnacle twice. Kyle, in his own words:

"I didn't know Leyline of Sanctity existed during the first two tournaments, but once I got it in the sideboard for Austin, the match-up felt much more comfortable."

But what other unique elements does Kyle's deck present besides a somewhat unusual sideboard card for a common, historically problematic, match-up for his weapon of choice?

"Spell Pierce is the MVP. It lets you set up Jace Beleren with backup on turn four against other control decks, giving you "better" Jaces. It counters nutty Kuldotha Red starts, takes care of Summoning Trap effectively, and stops Duress and Doom Blade when beating Vampires.

"The real advantage of my build compared to what I've seen is how lean it is. This is a really fast Standard format with lots of explosive decks, so having lots and lots of versatile answers in the one- and two-drop spots sets up your planeswalkers better.

"White-Blue Control is really like a combo deck. You only need two attack phases to win most of the time (which usually involve a Celestial Colonnade). The biggest combo is Jace, the Mind Sculptor + Gideon Jura. When you have both out it feels impossible to lose against pretty much any deck."

Kyle's position is that White-Blue Control has few serious problem match-ups. It has "all the tools" to handle the threats in the format, and can fall back on assembling an offensive game that is hard to stop. In addition, most decks in the field are weak against his fast one- and two-mana monkey wrenches.

I was pretty deep into thinking about how I wanted to present Kyle's deck when I noticed something even more surprising than just seeing White-Blue Control on top: 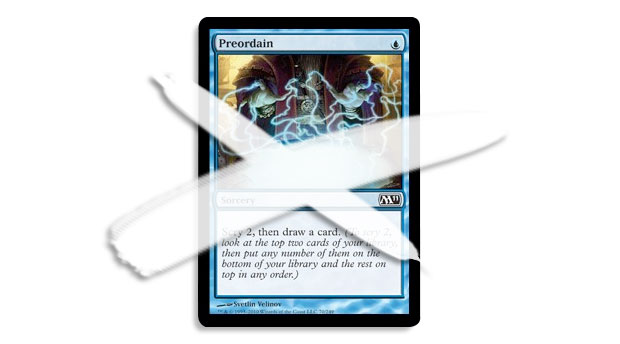 Me: Who are you? Expensive Sorcery Master?

"I don't understand the hoopla surrounding Preordain. Wall of Omens is way better! It feels like a personal victory whenever my opponents cast Preordain, don't scry anything to the bottom, then just draw the next card."

Unsurprising given his kill cards, Kyle isn't a huge fan of Frost Titan in White-Blue Control, either. He feels that Sun Titan is better, and depending on the number of green-based mana ramp decks you expect, he might suggest a 2/2 split of Baneslayer Angel and Sun Titan rather than the 3/1 he actually used to win.

Tectonic Edge was essential to his plan against Valakut, the Molten Pinnacle / Eldrazi Temple / Eye of Ugin. Sun Titan + Tectonic Edge is obviously quite the combo against any kind of non-basic lands.

What do you think of that, Primeval Titan?

Looking at Kyle's win inspired me to go back to last week's column and give a second glance to Kurt Spiess's White-Blue Proliferate deck:


At the time I reduced the deck to just Luminarch Ascension, but there is a whole heck of a lot going on in this deck list that we don't see in the average build. 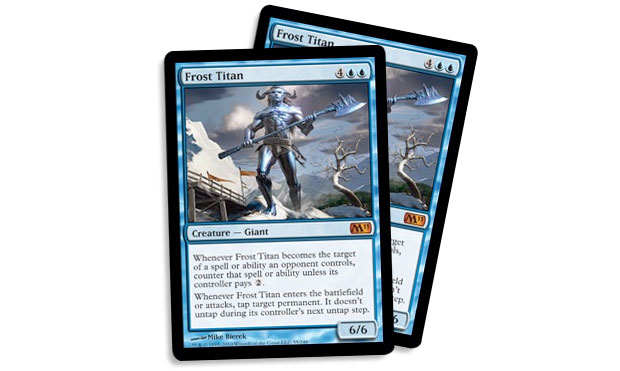 While Frost Titans are the default kill cards in Mono-Blue, Blue-Black, and Blue-Red Standard control decks, they are minority options in White-Blue Control—presumably because of the opportunity to summon a Baneslayer Angel. Or, as Kyle pointed out, above: Sun Titan can be awfully good in the same slot.

One thing to remember, though, is that Frost Titan can lock down an Eye of Ugin, even if it can't cycle repeatedly through a Tectonic Edge to rip up all the Valakut, the Molten Pinnacles.

But the really unique part of Kurt's deck centers around this cluster of cards:

It obviously isn't unusual to see a bunch of Jace-named planeswalkers played together with Gideon Jura. Kyle Sanchez's deck, for example, played an almost identical suite of planeswalkers.

The distinguishing twist to this list is of course Contagion Clasp.

Contagion Clasp takes a minority White-Blue Control card like Everflowing Chalice from "pretty good" to "mighty exciting," and all the planeswalkers get better.

And then there is Luminarch Ascension! 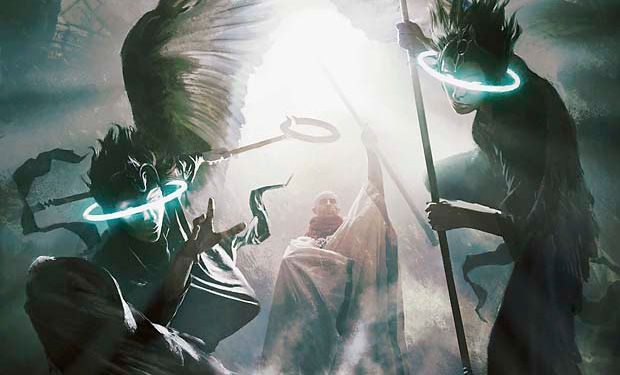 Luminarch Ascension is generally speaking a sideboard card used only against other control decks, but in this deck, with the ability to accelerate counter acquisition (even when the opponent is successfully attacking you!), it becomes quite the frightening threat card.

Spiess even played a fourth copy in the sideboard!

Ultimately, Kurt played some of the good stuff that helped distinguish Kyle's deck. Sure, he played Preordain (just like most blue mages), but he also had the fast disruptive permission—even if his Spell Pierces came out of the sideboard.

The past week or two I have had a great time watching the best players on Earth duke it out over at ChannelFireball.com. I was quite inspired by the video throw-downs between Brad Nelson and Luis Scott-Vargas, and decided to dip my own toes back in the "making Constructed videos" waters.

Here are a couple of Magic Online matches where I tried my hand at the Proliferate White-Blue.