4 is a lot of damage for one card.

lmost every time a reasonably costed burn card has been available that could deal 4 damage—especially when able to damage either creatures or players, and most especially as an instant—it has grown up to become a tournament staple. Flames of the Blood Hand helped win a Pro Tour Championship for Mark Herberholz; so did Char. And Flame Javelin? Flame Javelin was like Flames of the Blood Hand and Char in that it usually cost three, but as a big 4 haymaker with essentially no drawback but its intense cost... was kinda sorta a six.

In times past, Fireblast was perhaps the most fearsome instant ever. No card helped players at every level slay more Pro Tour champions. Ever. Fireblast was the special something that helped Deadguy Red make so very many mages dead. 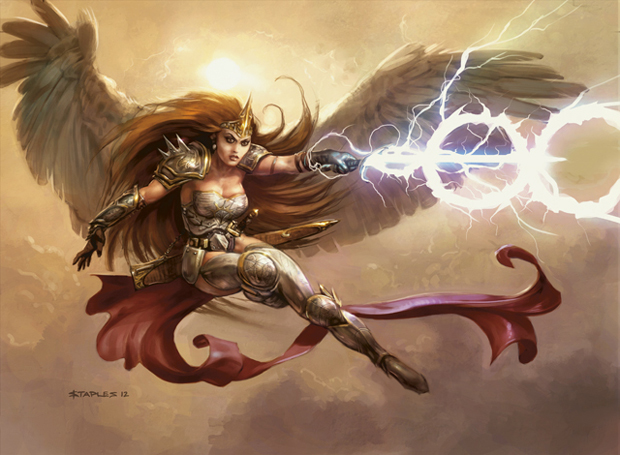 And Flame Rift? Even today, Patrick Sullivan, the Rain Maker, continues to knock down StarCityGames.com Legacy Opens packing this particular sort of heat.

4 is a lot of damage for one card.

For a red mage, 4, on one card, is almost like two whole cards.

Even a conditional 4 is often worth the tournament nod. Electrostatic Bolt only did 2 damage to most creatures (and no damage at all to other players) but its ability to deal 4 damage to artifact creatures made it a conveniently costed solution to Disciple of the Vault or Arcbound Ravager or even Myr Enforcer... and, for that matter, Goblin Warchief. Electrostatic Bolt was an important puzzle piece during Affinity's reign as top dog in Standard.

The cost from 3 damage to 4 is often a serious jump. Lightning Bolt to Char is a huge one. Packages of 3 damage often force a red mage to waste multiple cards to finish one big creature... But a single packet of 4 damage will often suppress a legit fatty.

And in today's Standard? The fatties at 4 toughness are everywhere, difficult to beat (especially for red), and often drop out of nowhere. Loxodon Smiter is simply huge for its cost. And Restoration Angel? Half the time it appears in the middle of combat! With no warning!

It is with these two important principles queued up—(1) that 4-damage red cards get played and make waves almost whenever they are made available, and (2) that the jump from 3 to 4 can be expensive—that I unveil the latest in debutantes: 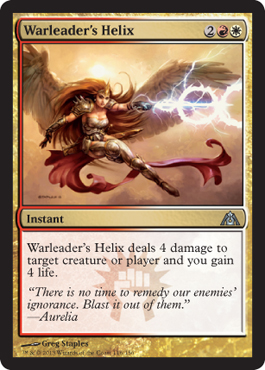 Let's get the basics out of the way...

This is not a particularly nuanced card. If ever there was a card that could be summarized via a pithy stack of four words it is this one: "Lightning Helix for 4." Is Lightning Helix for 4 something that you might want to play with? I should think so! After all, we spent the whole first part of this article talking about how great tons and tons of burn spells that could deal 4 damage have been in the past. And in this case? Warleader's Helix doesn't just deal 4 damage at instant speed... it adds on 4 lifegain for good measure!

The one potential eyebrow-raiser is the mana cost of Warleader's Helix: 4 might be a lot of damage (and 4 life is a great add-on) but four is also kind of a lot of mana (Zvi Mowshowitz once made the declaration that any card that costs four should be able to carry a game). Which prompts the question... how much do you think a Lightning Helix for 4 should cost?

You obviously can't Charge three. Flame Javelin was super popular as a conditional

. Flame Javelin was a consistent tournament performer held in check only by the degree of difficulty demanded by its particular combination of three mana symbols. A variation on

... while having the lifegain add-on! If in fact we want a "Flame Javelin that gains 4" the reality is, you kind of have to Charge four or more for the effect. Three mana just wouldn't be fair to everyone else.

Now that we've got all that out of the way, what might be fun is speculating just where we might see Warleader's Helix see play. Contribution in a Red Deck Wins variation vs. Boros Beatdown is the obvious reaction; after all, this is a burn card and Boros is its guild. That said, the successful beatdown decks in recent Standards have either wanted nothing to do with a four-mana spell (Naya Blitz being almost all one- or two-mana cards), or very stingy with its four-spot (maybe just a set of Hellriders in Gruul... or giving up the Hellrider spot for the more flexible Ghor-Clan Rampager). So the "obvious" home might not actually end up that obviously right.

While I don't think that four mana is "too much" for the effect on Warleader's Helix, it does sort of presuppose play in a deck that wants to play more than four turns. And here's a potentially mind-blowing implication: Warleader's Helix is probably going to stretch the length of more games than it ends. After all, it essentially undoes an attack by a Ghor-Clan Rampager at the same time as it removes one from the battlefield!

RWU Flash variants could be future consumers of Warleader's Helix. These decks already like playing big-lifegain/big-advantage cards a la Sphinx's Revelation, and the lucky Charms version actually plans for gaining infinite life via its Azorius Charm lifelink loop. Flash decks want flexible cards that can kill creatures (and, again, stretch what might be short games to the position where Sphinx's Revelation becomes relevant) and can double up the effect with Snapcaster Mage or Augur of Bolas.

While Naya Blitz might not be battering down the door to invest four in a Warleader's Helix, Naya decks with Farseek—everything from Naya Humans to dedicated Naya Ramp—can at least afford it. Naya Humans likes to dip its toes around a couple of Searing Spears and an assorted Planeswalker or three. Naya Humans is the kind of deck that wants to be both pretty quick (like Naya Blitz) but also be able to compete once the opponent has answered the first wave and starts playing more powerful cards. Warleader's Helix might be able to bridge the functionality of a Searing Spear while helping that deck answer one of the format's (and one of its own) most troublesome tools: Restoration Angel. A 4-toughness flier available at instant speed, Restoration Angel can be positively bedeviling for red beatdown decks... while no point-removal card is likely to be able to stop all the advantages Restoration Angel can provide (turning a seemingly acceptable battle into a bloodbath, blinking a Huntmaster of the Fells, etc.), now Naya can at least kill one.

And who knows? With Dragon's Maze perhaps we will see the rise of some future incarnation of multicolored control. Is there actually going to be a deck that can win the game via Maze's End? If so, that deck would both want to live long enough to get ten ponderous Gates onto the battlefield and would by definition be able to cast this card via its Boros (and other) Guildgates. Even if we are not talking about a Maze's End deck, there are certainly control shells where we might imagine being able to cast it. For instance, Wolf Run Bant.

Melissa DeTora's Pro Tour Top 8 deck not only played four Sphinx's Revelations and four Thragtusks and four Centaur Healers (along with four Restoration Angels to blink the latter eight-pack) but three Rhox Faithmenders and even RW icon Gisela, Blade of Goldnight! If ever there were a control shell that both wanted to gain lots of life and was willing to invest in a big Boros bomb... Wolf Run Bant is it.

"Lightning Helix for 4" sure is a simple thing to say.

Where this heavy-hitting instant ends up, though? I guess we'll have to run through the maze to find out the specific answer.

But I'll give you one smirking prediction: Some very successful, and probably very happy, new-deck deck.