s I have said a couple of times in a couple of different places already, Rakdos's Return is one of my favorite new cards from Return to Ravnica. I don't think it is the be-all-and-end-all or anything; and I don't think it is "the best" the way most readers use that term, but I really like it and think it will serve as an important tool and limiting factor in the upcoming Standard. Now, clearly, Rakdos's Return is a little bit difficult to evaluate. We have all kinds of opportunities to wag our fingers or nod our heads at the obvious cards, the ones we can see having applications in every game: cheap removal that we can compare to different cheap removal, undercosted or overpowered animal life—cards that, in general, buy us cardboard or mana whether we peel them on turn two or turn twenty-two. It just isn't a stretch to open our arms to a Snapcaster Mage or an Abrupt Decay. 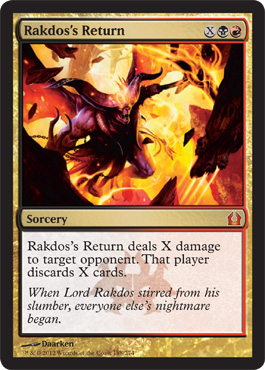 Many of you probably see the aesthetic similarities to a Blightning... but Rakdos's Return is so much less mana-efficient than a Blightning (plus, although it technically carries a lower mana cost in the upper-right, Rakdos's Return doesn't exactly combo off of a Bloodbraid Elf). Few, I would guess, have a lot of first-hand knowledge around getting a Mind Shatter to resolve through a permission curtain... and Rakdos's Return is most of a Mind Shatter. Plus, it is also a Blaze of sorts, even when your opponent's hand is empty.

I think that, at least as a sideboard card, Rakdos's Return is going to determine how a lot of games of Magic: The Gathering end, and first and foremost—almost the first time you see the card—one of the most obvious applications to Sphinx's Revelation is how equal and opposite it is to Rakdos's Return.

Better yet... are there a lot of cards you can imagine wanting to peel straight away right after being hit by a Rakdos's Return?

You don't know what a Sphinx's Revelation is yet?

So, next most obvious thing: The costing on this card is a wee bit—one blue mana bit to be clear—different from Rakdos's Return. Dealing damage is more valuable in Magic: The Gathering than gaining life (compare Lightning Bolt to Healing Salve), so the extra blue mana here gives us quite the clue behind the Renton curtain in regards to costing. If you are going to make a body pay X to do something, this effect is apparently a mana more valuable than making someone discard (even while dealing damage).

And with good reason!

Like we just said, after you've been hit by a Rakdos's Return, there aren't a whole lot of cards you'd rather rip.

So even with Brian David-Marshall's big reveal of Syncopate last Friday, there is a pretty big assumption we can make about the upcoming Standard format: People are going to play fewer permission spells than you are probably used to. Sure, there will be Dissipate, but that was a two-of sideboard card all last season. No Mana Leak means no no-strings two-mana responder. Are there options? Yes. Will players take them? Still yes, but in far lower numbers.

It is interesting that we actually have some precedent around not just a control deck, but a white-blue control deck in a format without a lot of counterspells. Here is an example of a Standard white-blue deck that former Player of the Year Brad Nelson used to take down a gigantic Grand Prix just two years ago... mere moments before the return of Mana Leak in Magic 2011:

Success leaves clues, so I would encourage you to take a long hard look at this decklist. There are big and expensive spells like fellow-Sphinx, Sphinx of Lost Truths, and the five-drop Baneslayer Angel.

But those are merely guys. Some of the best guys ever, maybe (Brian Kibler once said Baneslayer Angel was the strongest large creature of all time), but guys nevertheless. Creatures. Meaning cannon fodder. It's like the old man always tells you, "... Just dies to Doom Blade."

What might be a more interesting card to look at in Brad's deck is Mind Spring.

more than Mind Spring; in addition you get the upside of gaining a ton of life, not "just" drawing a ton of cards.

If you haven't played a lot of white-blue mirrors from this era there is probably something you likely don't know: Mind Spring wasn't just "a card." It was the breaker. Guys died. Jace traded with Jace (World Champion and Psychatog master Carlos Romao, in the same Top 8, played three copies of Jace Beleren, too). With next to no counterspells, players walked miles and miles to school with no shoes—uphill in both directions. And Mind Spring resolved.

In a world where both players had more answers than the other had threats, resolving Mind Spring was big Magic. If what I predict ends up true (low permission in Standard), Sphinx's Revelation is going to show that you don't need an Urzatron in play to break the game wide open with it.

Now, Brad actually played a ton of cards with either dedicated or incidental life gain capabilities... Sejiri Refuge, Kor Firewalker, and especially the aforementioned Baneslayer Angel. Perhaps a card like Sphinx's Revelation can help control decks to ease up on playing a lot of unique lifegain-capable slots... 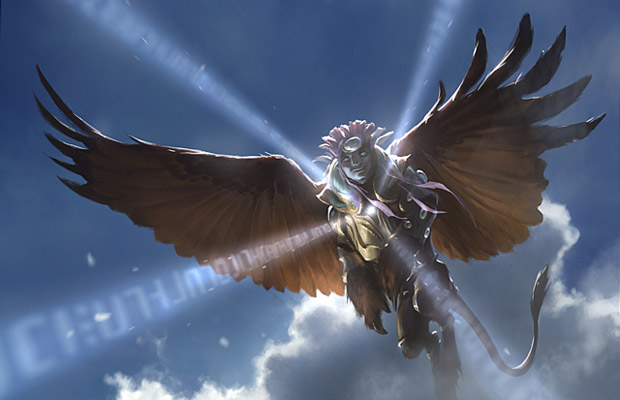 But while we're on the subject of Sphinxes, namely Sphinx of Lost Truths from Brad's 2010 sideboard, it might be interesting to stack Sphinx's Revelation up against a creature-version. Sphinx of Lost Truths asks you to pay fivefor a body and the chance to triple-Loot; if you pay for everything (i.e., seven mana) you get to keep the three extra cards.

Can we really draw parallels between Sphinx's Revelation and a flying fat man?

The question, really, is: What is the value of a body... immediate and long-term?

Let's say you are a little bit behind and your opponent has the initiative. You, as fortune would have it, have seven or so mana to spend on not dying. If you put that into a Sphinx's Revelation, you would gain 4 life and draw four cards. Given an actual Sphinx you would have a giant counter striker. But in this case the 4 life will hopefully contain one of your opponent's attackers (kinda sorta "a block"), and you still have four cards to move you ahead next turn.

No, it's not exactly a guy, and it might not compare favorably to a solid card-drawing fatty at its best, but Sphinx's Revelation isn't as one-dimensional as a more expensive but higher-impact Mind Spring.

So here's the last thing: Sphinx's Revelation might be pricey, but it's never "bad," exactly. Against beatdown it can shore up your life total while moving you ahead, and against control it is a backbreaker on the order of a Mind Spring or Blue Sun's Zenith. That is, "a breaker."

But as we said way back at the beginning, cards like this can be bedeviling because most players don't have a lot of practice with them. That said, we do know that playing a couple of big and expensive threats is something most white-blue control decks are in the market to do (typically topping out on Karn Liberated for the last year or so). Here's the thing: spells like Dreadbore make expensive Planeswalkers less consistent investments than in certain times past. Karn? Nicol Bolas? You might just be investing seven or eight mana, rocking excitedly back-and-forth in your chair for essentially an Oblivion Ring. Which is not to say that these aren't perfectly good cards, still... but between Dreadbore and Slaughter Games (and, for that matter Rakdos's Return, which can hit or punish a Planeswalker wherever it is), a white-blue Control mage has more incentive than ever to diversify his or her top end, and certainly to carefully consider how much to rely on expensive Planeswalkers.

In sum, Sphinx's Revelation will be different things to different players and defeat different opponents in different ways. Like the overpaid Overrule that gleefully "countered" hellbent Demonfire the last time we paid a visit to Ravnica, Sphinx's Revelation is the not-exactly-equal (but opposite) to Rakdos's Return. It will be the axis around which many control mirrors spin... and break. It will keep you alive against aggression while digging you to your next answer card (even as you curse it with the intent of siding it out), and fill a finisher job that today, many players don't realize has a

-sized "Help Wanted" sign out front. It might not be the hero you asked for, but surely, in many games over the next two years, Sphinx's Revelation will be the hero you need.