ello and welcome back to Perilous Research, DailyMTG.com's exclusive Magic Online column. The last eight or nine months have been a hectic time for Standard. The format seems to change every few weeks. It can be difficult at times to pinpoint the moment of a format shift. Luckily, I've been watching Magic Online event results like a hawk and I'm here to give you the scoop. 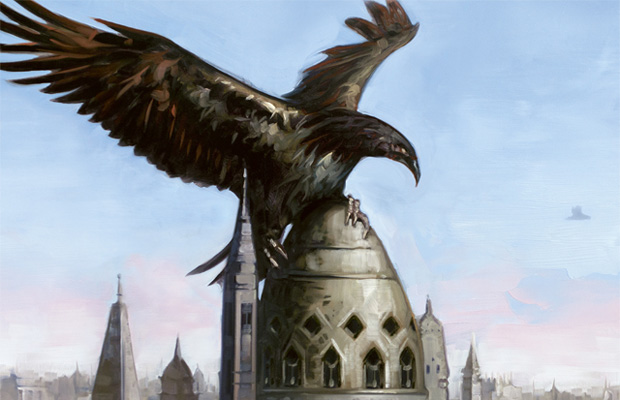 The past week's Magic Online events were, once again, dominated by Jund, Red-Green Aggro, and Junk Rites. The wisest deck builders will often use the three or four most dominant decks as hurdles for their newest creations. Today, I'm going to take a look at the newest innovations to come out of Magic Online. Let's jump right into some decklists!

The first deck we'll be looking at today is the latest take on Unburial Rites. I'm really excited about this deck and I've found that it's difficult to lose when I'm piloting this. I'd like to talk about this deck's approach to beating the big decks of the format.

This deck takes advantage of Blasphemous Act's absurd power level against Junk Rites. Any of you who have played a reasonable amount with Blasphemous Act strategies will be well aware of Junk's weakness to the card.

Previous incarnations of Unburial Rites strategies often found themselves being overrun by the Gruul deck, especially when losing the die roll. This version uses Boros Reckoner to hold down the fort and essentially make any sort of combat into a complete nightmare for your opponent. Additionally, Boros Reckoner has the potential to outright kill an opponent when comboed with Blasphemous Act or Harvest Pyre. Harvest Pyre will have plenty of food when you're casting Faithless Looting, Mulch, and Grisly Salvage; this seemingly innocuous removal spell has a TON of killing potential in a deck like this. Winning completely out of nowhere is always a good angle.

Against Jund, this deck wants to maximize the value it gets out of Angel of Serenity and ride that to victory. The deck puts pressure on opposing Planeswalkers and players somewhat effectively with Lingering Souls and Boros Reckoner. In theory, the Jund player shouldn't be able to freely cast his or her Planeswalkers when facing off against this type of strategy. Eventually, you can Angel of Serenity your Angel of Serenity and make sure you've always got the board presence you need. Olivia Voldaren has, historically, been a strong card against the Junk Rites decks that have little to no removal; she's one of Jund's best ways to interact with a Junk Rites deck once it gets going. This deck, while not thrilled to see the Vampire legend, has access to Blasphemous Act for the reset if necessary, its own Olivia, or a Harvest Pyre to shoot her out of the sky.

This archetype is extremely new and there are still a few different versions floating around. Some versions use Sire of Insanity as an additional graveyard enabler and KO against control and Jund players who don't have a Ground Seal in play.

4 Angel of Serenity 3 Huntmaster of the Fells
75 Cards

It may not be entirely new, but the Red-White-Blue Control decks are still alive and well. Voice of Resurgence is seeing less play than last week and things may be slowing down to the point where we can start taking over games with Sphinx's Revelation again. Niv-Mizzet, Dracogenius is beautifully positioned in the current format. Think of it as a worse Olivia that happens to be awesome against control and Planeswalkers. This deck suffers in the Esper control matchup, but Esper is becoming more of an oddity. I remember playing Essence Scatter in the original White-Blue Flash deck last fall. No one was playing Cavern of Souls and I was super impressed with the card. Now, we're back to a place where Cavern of Souls is less popular; Naya Human decks have fallen to the wayside in favor of decks with Advent of the Wurm or Gruul. Creatures these days do a lot of nasty things when they hit the battlefield; removal spells are weaker as a result. Thragtusk is just another card in the graveyard with Essence Scatter—no 3/3, no life. We can expect this deck to be the control deck of choice going forward.

Two weeks ago, I touched on the Borzhov Midrange deck, but I didn't get a good opportunity to showcase the strategy. This version uses a lot of unique cards that allow it to grind out a race against most decks in the format. Nearheath Pilgrim may look strange, but it makes the deck incredibly difficult to race for other aggressive strategies, while the big spells are all awesome against the control decks. Stensia Bloodhall makes an appearance here. The deck can get into a grind very easily with cards like Obzedat and Blood Baron of Vizkopa. You're gaining tons of life and you have burn spells, it's pretty nice to have Stensia Bloodhall to grind your opponent into range of a Searing Spear or a pair of Pillar of Flames. Restoration Angel gets to interact with Sin Collector here, too. This is an interaction we haven't seen much of, despite its incredible power. I think decks like this will continue to do well in the coming weeks.

2 Garruk Relentless 2 Liliana of the Veil

Decks like this have been doing remarkably well as of late. The deck is about the midrangiest midrange deck ever. You lose out on a lot of Jund's power (Pillar of Flame, Sire of Insanity, Dreadbore, Rakdos's Return) and get better mana, Mutilate, and Geralf's Messenger. That may seem crazy, but giving Jund a Wrath effect and Geralf's Messenger doesn't seem too bad. I don't love Liliana of the Veil right now, but the rest of the deck is just a pile of cards that I can really get behind.

We already talked about Red-White-Blue, but I'm pretty excited about the latest incarnation of Delver of Secrets that popped up earlier this week on Magic Online. People still don't understand what this deck is about and it's very easy to completely dismantle someone when they try to settle into a control game. The deck outright kills people with burn spells more often than not. Games are likely going to unfold in one of a few ways: If you don't have an early Delver of Secrets or Geist of Saint Traft then you have to decide early if you want to just aim midgame burn at your opponent's face or if you want to interact and play the control game. Against a creature deck that doesn't have a lot of pressure because of a Supreme Verdict or double-Augur draw I would likely just start doming my opponent. If my opponent is playing a deck with Thragtusk or has a strong board presence, I'm more likely to play the control game and maximize interaction.

When the deck draws Delver of Secrets and/or Geist early, you want to be as aggressive as possible with the cards to maximize the damage they deal while they're still in play; you need to shift gears immediately once these creature have been dealt with and usually go into burn mode, just aiming stuff at your opponent's face. The creature plan into the control plan is usually pretty poor. Thunderous Wrath is a card I expected to see more of since it was printed. I'm excited to finally see it put to good use again and I look forward to this deck doing well in the coming weeks.

Bant control decks have a new look. The deck can put a lot of pressure on its opponent early and it lets the deck have openings for Ætherlings in a lot of spots where the powerhouse blue rare from Dragon's Maze can just take over the game. The deck suffers in the Jund matchup, where it needs to be on the play with Farseek to matter enough before Sire of Insanity ruins its day. Almost every deck in the format is very weak to this type of strategy right now. If people could find a way to make this deck beat Jund then we might have a new format-defining archetype on our hands. *Cough* Sigarda, Host of Herons *Cough*

Magic Online continues to be the breeding ground for new, format-defining archetypes. So far, 2013 has given us the healthiest Standard formats in the modern era. Learning about each of these decks should prod your brain in a way that can help you formulate new sideboard plans against decks you've been playing against for months, make main deck changes to your deck as a reaction to the strategies being used against it, or strike a spark of creativity that spawns the latest great deck in an endless line. Join me next week when I'm going to talk about the most-played Standard decks and discuss specific changes that have been made in recent weeks.