The Geists of Christmas Past and Present

Now, the Constructed portion of Pro Tour Avacyn Restored is Innistrad Block Constructed, a format that has graced these (virtual) pages not at all. As such, in prep for the upcoming sure-to-be-Earth-shattering professional event, crack editor Trick Jarrett asked yours truly to devote a couple of episodes of Top Decks to Innistrad Block, so as to cozy ye olde audience into Barcelona's heretofore unfamiliar waters.

For this week's article, I ask you to consider these three points to begin with:

Many of the decks in Innistrad Block Constructed resemble beatdown decks you might see elsewhere... Only they largely have three to four Brimstone Volley and/or three to four Devil's Play for their support and finishing touches. Here are some examples from the past week or so:


The advantage of the red-green deck over other beatdown decks in the format is, of course, in the area of mana acceleration. The deck has Scorned Villager, which allows it to move from two to four on turn three; lots of the best cards are four mana ones, like Garruk Relentless, Hellrider, and Huntmaster of the Fells. 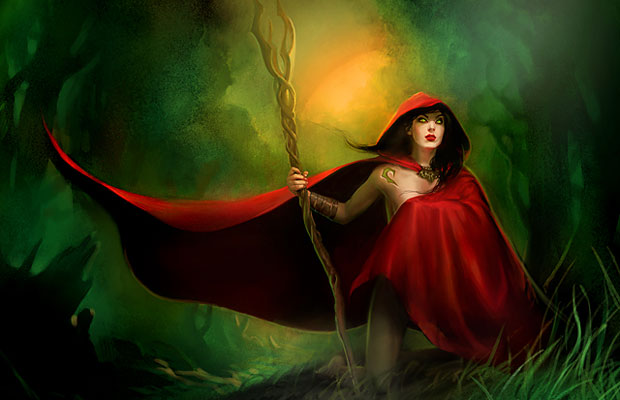 Dawntreader Elk doesn't precisely jump you to four quickly, but its ability to absorb an attack while moving up your position on the battlefield is nothing to sneeze at... especially when so many of the relevant decks are also aggressive.

4 Furor of the Bitten 4 Spectral Flight


The Block version of Delver is all aggressive cheapies—two kinds of one-drops and the popular Standard standard Invisible Stalker on two—getting in early damage, sometimes with the help of balloon pants like Spectral Flight, the heretofore unseen Furor of the Bitten, or even Butcher's Cleaver! Then, after you've chipped at the opponent for a bit, it's kick, wham, Brimstone Volley (as above).

The deck flipthis ran has quite a bit of opponents-stifling interaction: Ancient Grudge to two-for-one someone else's Butcher's Cleaver or Witchbane Orb; Dissipate for "anything."

4 Feeling of Dread 3 Ray of Revelation


Here is a totally different Delver deck in the same colors; bashishi13 could start on Delver of Secrets, of course, and hold a lead with Dissipate the same way. But bashishi13 has loads more card advantage with Think Twice and Desperate Ravings; plus, Faithless Looting can help dig to key cards from the very first turn.

Burning Vengeance rewards you for playing cards from the graveyard, so you basically get two bonuses, one being the (presumed) card advantage generated by flashing back card drawing, and the other being the lockdown damage of Burning Vengeance. The card can help you control (other) small creatures... or just burn face.

If I were picking horses for Avacyn Restored readiness? Given some of the new miracle cards? I'd start with Blue-Red Delver.


Eail's deck can go aggro from either side, which is a convenient feature given its nine Mountains. It can start on a Champion of the Parish (and then buff with Gather the Townsfolk), or start on Stromkirk Noble, with a self-strengthening, non-Human setup plan.


The deck jpmoorepdx ran in this event could also produce a stack of small creatures via Gather the Townsfolk, Midnight Haunting, or just dropping cheap guys... 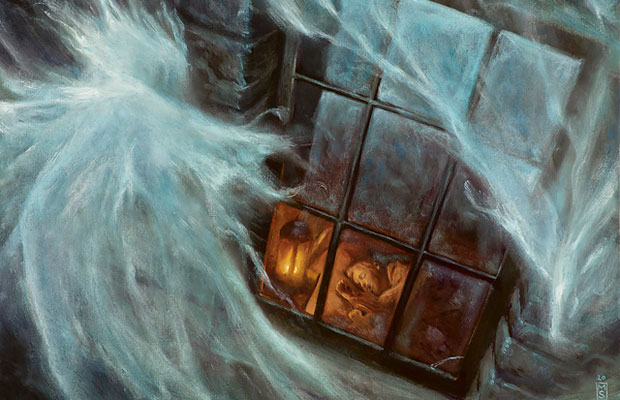 I think it is important to understand the capacity of some of these red-white decks if you want to familiarize yourself with Innistrad Block. Rally the Peasants can set up a massive amount of damage, kind of like a mini-Overrun (or "more than Overrun" with one more mana)... all at instant speed.

Not all the red-white decks have Rally the Peasants, but you should probably know it might be there, as it is the kind of card that can unexpectedly win games when it catches you napping.

Plus, red-white in general seems to be one of the most popular decks in Top 8s. If it were me? I'd have solid plans whether or not my opponent is threatening the off-color Overrun.

Most of the decks we have looked at so far can be categorized as some kind of beatdown with some burn spells thrown in to either get blockers out of the way or to finish games. The rest of these decks represent a spectrum including midrange control decks, heavy removal decks, and self-mill/fatty builds.

4 Huntmaster of the Fells 4 Snapcaster Mage


Decks like these are about what a control deck looks like for Innistrad block. RUG has Dissipate for permission... and expands out in several different directions to show off various different control capabilities.

Snapcaster Mage and Desperate Ravings are the card advantage and card drawing, Garruk Relentless is the powerhouse, and Huntmaster of the Fells even provides a bit of life gain. Because the deck has some RG to go with its U, Kessig Wolf Run is even there to help close out games!

Blasphemous Act gives this RUG Control a kind of Wrath of God, while some of the other red cards (Devil's Play and Brimstone Volley) are kinds of constants we have seen over and over.

3 Gnaw to the Bone

Gnaw to the Bone! 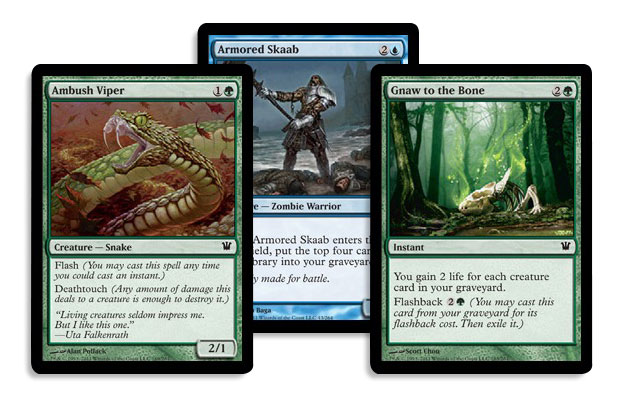 Self-mill is a strategy essentially unique to the Innistrad block. Cards like Mulch and Tracker's Instinct are both good and understandably playable just on their faces, but these cards—and ones like Armored Skaab—gain additional value in light of fatties like Ghoultree and Splinterfright.

As with many other green decks in this format, a light red splash gives way to Kessig Wolf Run (to make your fatties marginally fatter but quite a bit harder to chump block).

Just as Innistrad Block Constructed gives green decks a RUG option, this creature-heavy format with its bombs and colored development capabilities gives players a chance to rediscover the Jund Shard of colors. Rather than expanding into a bunch of different capabilities, these get better and better at specific ones (in particular killing creatures). Let's look at three different possible Jund builds:


GALL's deck is actually good at two things: card advantage (Bloodgift Demon) and creature elimination. Sometimes both at once (Daybreak Ranger). I picked it over some similar lists just because I like this card Olivia Voldaren, which can be quite the bomb on 6+ lands.


TARSC's deck, on the other hand, is good at getting big creatures—up to and including candidates like Predator Ooze and Vorapede—but needs to hit its lands to do so (which is part of why Dawntreader Elk has been upgraded to the four-of.

Flayer of the Hatebound doubles as a big creature as well. The deck has tons of creature killing redundancy elsewhere, though, including four-of Sever the Bloodline as a mini-Wrath on top of another kind of mini-Wrath.


IBL0304's deck goes completely over the top. With the exception of Huntmaster of the Fells, this deck is pretty much all cards that break the opponent's permanents, or in one or two cases get us the elimination we are looking for (Faithless Looting). IBL0304 even has Victim of Night for point removal early... before Curse of Death's Hold on five.

We're going to wrap up on mono-black. Black in Innistrad block can take a number of forms, from Zombies beatdown to creatures-hostile board control and removal. We will close by focusing on a synergistic and aggressive version:

2 Liliana of the Veil
75 Cards

We have super-fast one-drops like Diregraf Ghoul that are great enough to dominate Standard. In addition, Nerney9's deck has all kinds of routes to additional value and card advantage. To wit:

Black Cat is an unambiguous two-for-one if you can get it to trade with an X/1 or spell out of the opponent's hand. Respectable speed bump in other cases, as you will be slowing down the opponent's development.

Geralf's Messenger—is the message "you're dead?" The signature threat of the Standard Zombies build is of course here, and wreaking even more damage loss of life.

Gravecrawler makes for a card-advantageous graveyard engine, and Nerney9's deck even draws on Ghoulraiser as a kind of tribal Gravedigger.

There is mad internal synergy in the deck, from discarding Gravecrawler to Liliana of the Veil to sacrificing Geralf's Messenger to Altar's Reap. At worst, this kind of a deck should be considered a dark horse to perform in Barcelona (no pun intended).

Innistrad Block Constructed, despite commanding less than 50% of Standard's available card pool, might actually be a more diverse roller coaster of a format. While we have cards like Delver of Secrets and Snapcaster Mage—the iron-walled (if economical) first line of Standard's flagships and battle cruisers—the absence of Seachrome Coast and Glacial Fortress have limited the ability of a White-Blue Delver deck to make the same kind of substantial mark. Rather, red-white—with its Clifftop Retreat—has the advantage in dual lands, lending itself to being the most popular. At least at present.

And yet, we see limitations there, too.

To accommodate both a first-turn Champion of the Parish and a first-turn Stromkirk Noble, the red-white mana base—again a kind of Cadillac among two-color aggro attempts—is ambitious to say the least. Many, dare we say even most, openers are going to be less-than-perfect, making for a slower tempo even given the quality one-drops and finishing potential of a morbid Brimstone Volley.

Now, of course, these are merely the Geists of Christmas—or rather "Innistrad Block Constructed"—Past and Present, whereas Barcelona proper is going to introduce us to an age of literal, Magical, miracles (and other exciting new developments).

What Angels, Spirits, and so on might we encounter when faced with these upcoming Future Geists (and decklists)?