"Four weeks ago, Alan Comer showed up at GP Las Vegas with a ten-land deck of Merfolk, cantrips, and a rare from Planeshift that you couldn't trade to even the most impressionable of little kids. One month later it is the most popular deck in the field. It appears the only thing that grows faster than a Quirion Dryad is this decks popularity."

en years later and this intro paragraph is still one of the most memorable pieces of Magic writing ever to me. I love Kowal's idea of a little

creature—here Quirion Dryad—and its unexpected journey, graduating from the dollar-rares box to headlining some of the most powerful and popular decks in the history of competitive tournaments, Miracle Grow and then SickestEver.dec, to a Green-Blue Delver of Secrets revival in the summer of 2012. 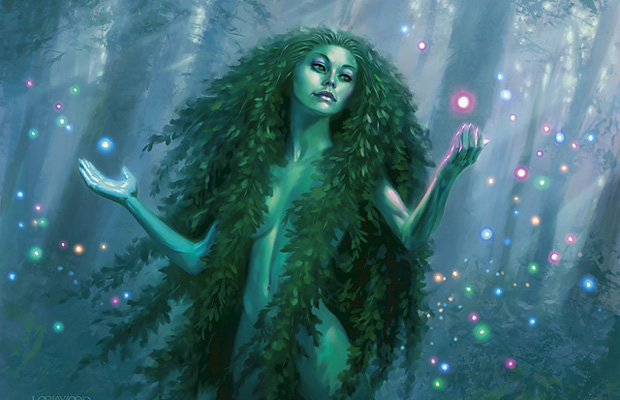 Quirion Dryad is unambiguously a little bit inefficient all by itself. Part of the understandable skepticism of even "impressionable little kids" is that almost anyone can look at a 1/1 for

(that doesn't do anything else but fight) and know instinctively that that cost versus those stats aren't good when considered in a vacuum. You don't have to think long or hard to get a better deal in the abstract, in terms of cost versus power and toughness. But of course, the story of Quirion Dryad isn't just the story of a 1/1 for two, but rather of a greater context created. If you combine Quirion Dryad with the right kinds of cards—and you could pick tons and tons of cards that you would both "generally want to play" that also "help Quirion Dryad get big"—Quirion Dryad will in fact get big, get big quickly, and ultimately prove an effective racer. Most players of a certain age think of Quirion Dryad combining forces with fast blue card-draw and cantrip spells... cards that can help you chain one into the next one to get Quirion Dryad bigger and bigger. But as a racer, it could be combined with a variety of potential catalysts. For instance, there were red-green decks that grew Quirion Dryad with cards like Reckless Charge, huge-ness, and haste, hand-in-hand, or built it up with an Incinerate, clearing a wannabe blocker and enhancing the attack all at once.

Quirion Dryad might have initially raised an eyebrow when thought of as merely a 1/1 for two mana... but as a 2/2 for two? And then a 3/3. And then an A, a B, a Yin, a Yang, a 7/7 or so? Yes, you have to invest more mana along the way, but the point is that you are investing that mana in cards that you might have been perfectly happy to cast anyway! You are incurring additional costs at par pricing, while Quirion Dryad is essentially getting bigger all by itself. Back in the early 2000s, The Rock was considered a playable Extended deck, but was often criticized for its lack of offense. You could slow down or even cripple your opponent to start, but because The Rock was relatively offense-light, you would often give him or her time to get out of it before sealing the deal. But combine a two-mana investment in Quirion Dryad with the consistent stream of Duress, Cabal Therapy, and point-removal cards? Quirion Dryad could be a transformative inclusion in all kinds of decks—not just making for the whole Miracle Grow/Super-Gro/SickestEver.dec archetype, but making existing decks faster while doing their exact same stuff.

But here's the thing: Like we said, all Quirion Dryad did was fight.

How about the take? 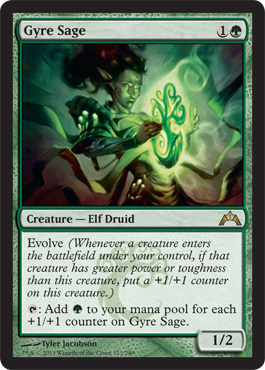 To start with, Gyre Sage is superior to Quirion Dryad on each of their respective faces. Quirion Dryad—eventually a format-defining two-drop threat—is a 1/1 creature for

; and again, all it does is fight. Gyre Sage, by contrast, is a 1/2 for the same cost, and also dips a toe in the favorite activity of many high-impact green creatures... it taps for mana (at least, eventually).

You can make the argument that Gyre Sage doesn't "grow" as easily or consistently as Quirion Dryad, but let's put this in a different context: Gyre Sage gets big simply by doing the stuff you would want to do anyway.

You know what has a bigger power than Gyre Sage? Borderland Ranger. Itty bitty Borderland Ranger, at 2/2, is going to help Gyre Sage get to 2/3 (i.e., big). Restoration Angel? Thragtusk? Bigger and bigger again. So, basically, doing the stuff that you would want to do with your midrange green deck... just the regular, everyday, operations of a Bant or Naya creature deck is going to turn your acceleration two into a legitimate additional monster.

If you get what you want, operate the way you want, with Gyre Sage it will quickly put some question marks around many pure hitters. Sure, Loxodon Smiter is an exciting 4/4 for three mana with quite a few exciting bells and whistles... but a correctly positioned Gyre Sage can put that popular format fixture to shame. Oh, and it costs less mana than the already-popular Smiter!

For a bit of specific context, think about any of the decks where you might today play Avacyn's Pilgrim or Farseek—or where both Avacyn's Pilgrim and Farseek see play. In an earlier Gatecrash preview, we pondered over a potential Domri Rade shell and thought about Farseek and Domri Rade played next to one another. Might Gyre Sage be better than Farseek in a Domri Rade deck, while occupying the same point in the curve? Has Bloodbraid Elf ever flipped over a Blightning? For many decks that rely on card type—specifically creatures—adding Gyre Sage over some other types of accelerators can prove contextually beneficial. The card works well with Tracker's Instinct... and can benefit from future flashbacks or Domri Rade activations. Gets there. Gets big. Bigger and bigger.

And because Gyre Sage will trigger on power or toughness, later in the game when you have to find your 2/7 Silklash Spider, Gyre Sage will keep on growing!

Now, we have to this point just spitballed about obvious ways to grow Gyre Sage. Point being, it will not be very difficult to help the Sage get big. Everything we already want to do with it helps it get bigger and bigger, after all. But Gyre Sage isn't "just" an update to Quirion Dryad. Growing is cute, and will be offensively beneficial eventually... but there is a whole extra chunk of extra text at the bottom of the card. A huge Gyre Sage doesn't just rumble in with the size of a Hurloon Minotaur, then Simian Grunts, then Erhnam Djinn, and beyond; it can tap for commensurately high-impact chunks of green mana.

So what are you going to do with all that mana?

The obvious end of a Gyre Sage's contributions are, well, obvious. Gyre Sage can help you cast your standard operating procedure Thragtusks. It can help you hard cast an Angel of Serenity or even make a Bonfire of the Damned marginally more miraculous. A big Gyre Sage works beautifully with Garruk, Primal Hunter. You can bring it out quick and draw up immediately if need be; the nature of the card—giving you green mana instead of mana in general—can even help you get over the

hump. Many Standard green decks have problems making Garruk, Primal Hunter because of the intensity of the green mana requirement. Done and done.

A recent innovation in midrange Standard green decks is splashing Sphinx's Revelation. At a Star City Games Standard Open in Las Vegas, Jun Yu showed us a Naya Shell with one Island, one Hallowed Fountain, and three Steam Vents for just this purpose. Assuming you can take care of your colors (or heck, just play a Bant instead of a Naya shell) Gyre Sage can make Sphinx's Revelation an even bigger breaker than it usually is. And that instant is already the Standard format's foremost game breaker.

3 Bonfire of the Damned 4 Farseek

3 Bonfire of the Damned 3 Deathrite Shaman 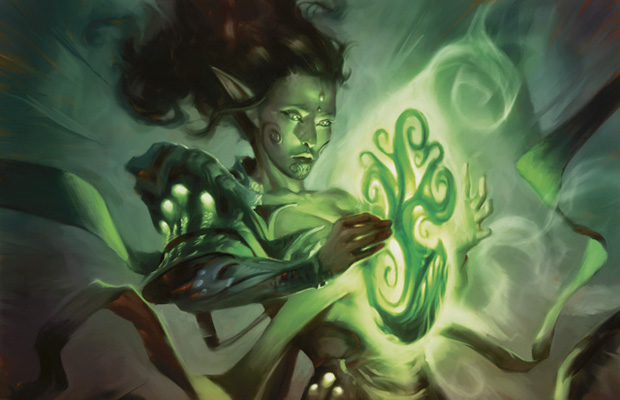 We spent the bulk of this preview talking about how seamlessly Gyre Sage can fit into shells we all already know about, how little it might cost to get a huge, heretofore unexpected return from our acceleration slots. Well, doing the same old same old (but a little bit better) is not the ultimate be all and end all of deck design. Evolve. Gyre Sage is, in a sense, a simple and straightforward card, but the threshold of its effectiveness does not end with creatures coming into play one at a time and checking their respective sizes each trigger time. There are more and other ways to put a +1/+1 counter onto a creature, and my guess is that Gyre Sage is going to benefit from more than one previously unexplored area. What about Gavony Township? It seems to me that Gyre Sage and Gavony Township might just get along like peanut butter and chocolate. How about Corpsejack Menace? Just playing with Corpsejack Menace is going to turbo-charge Gyre Sage's self-contained +1/+1 counter capabilities... But what about when you play Corpsejack Menace in concert with Gavony Township? What kind of crazy X-spell exploitations are we going to have in store?

Don't worry. Gyre Sage is going to give us at least two years to think these questions through.