e're just over a week away from the Born of the Gods release (with Prereleases happening worldwide this weekend!) and I couldn't be more tickled. Sweet new Gods, inspired new cards, new tributes to one of my favorite multiplayer mechanics, and even some new ways to bestow action for my pauper cube are all there. 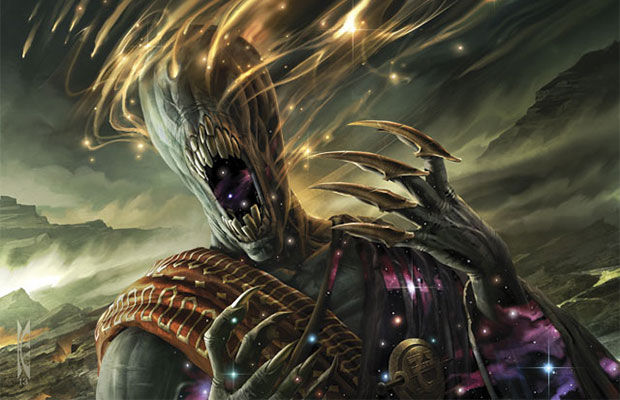 Of course, there are more divine matters to deal with. Two weeks ago, I challenged you to show me what you'd do with Karametra, God of Harvests as your commander in Commander. While I am an unabashed fan of her triggered ability and shared why, and how, I'd keep her on the battlefield as long as possible, there was no way to avoid her obvious attributes as a fatty. Being the leader of a deck, able to appear early in every game of Commander, is something you proved was far too appealing to pass up.

I mean, who doesn't like a few decklists to get started on building with the latest set?

Let's start with what I'd call the "classical" look at using a God as a commander: Powerful creatures and cards, backed by the consistency and durability of a God that can be played early. This version was sent in by Alex:

I wanted to give my input on how I would use the new God, Karametra, in Commander. I will be using her in my Karador, Ghost Chieftain deck for sure, as I am always looking for powerful ramp engines on a creature for that deck. I composed a decklist that I feel works well with Karametra's abilities.

In all honestly, Karametra's ability is powerful enough and doesn't require any abusing. Simply playing powerful creatures and triggering her ability even only once a turn is still a powerful application for her.

The deck has many targeted removal spells to protect itself, but also runs a decent selection of mass-creature and mass-artifact/enchantment wipe. It is a great way to clear the board of many threats and we won't have worry about our commander getting caught in them. She will live to swing in commander damage.

Main win conditions are very large, powerful creatures that trigger Karametra's ability, allowing us to play more creatures. Craterhoof Behemoth and Avenger of Zendikar are a great match together, and it is very convenient that Avenger Birthing Pods into Craterhoof.

Thank you for viewing my list, I hope it was interesting.

While playing plenty of staples is something some of you don't enjoy, I find it's among the easiest ways to see how a particular commander functions. When the rest of the deck hums along like clockwork, I find it's easier to see if the commander is making a difference or not. Even in decks where I've packed in every powerful card I own, I still want the commander to be a feature and function in the deck.

For me, it's why I find Trostani, Selesnya's Voice so different from Rhys the Redeemed in a dedicated token deck: Rhys punches way above his 1/1 stature. 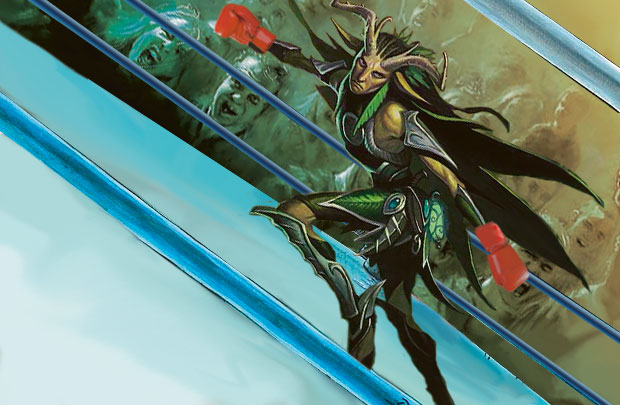 But let's assume we know Karametra is going to put in the good work we want. What else is possible when she's at the helm of our deck?

First of all, Karametra is only the second legendary creature I have seen and immediately gone and built a deck for. (The first one was Prossh, Skyraider of Kher.) I think her ability could be absolutely bonkers in the right build. To that end see my attempt attached. Highlights of the deck include:

Constant Mists: I think having access to a Fog is fantastic, and as we are going to have an abundance of lands, one we can buy back for a measly land seems pretty good value to me.

Baru, Fist of Krosa: There is a minor token subtheme in the deck and while he won't buff the white tokens, playing two creatures out with Baru and Deranged Hermit or Avenger of Zendikar around seems pretty good.

Cloudstone Curio: While it has the added bonus of being able to Nyx any pesky Faith's Fetters–like effects, it also has the value of letting us re-cast our creatures, a high proportion of which have ETB effects, and allows us to reuse Karametra.

Budoka Gardener: Flipping this into Dokai, Weaver of Life shouldn't be too hard in this deck and it should start pumping out some pretty large Elemental tokens.

1 Rhys the Redeemed 1 Swords to Plowshares

There's plenty of staples to be had in Archie's deck, but the angle here is closer to where'd I'd probably end up myself. The opportunity to attack with Karametra will probably present itself, but leaning on tokens to put in most of the aggressive work is a tried-and-true approach in Commander.

Landfall makes its case loud and clear here, too, as chaining creatures into lands into bonus effects is what can be best described as a "value train" for us, although "bountiful harvest" would be an acceptable on-flavor alternative. 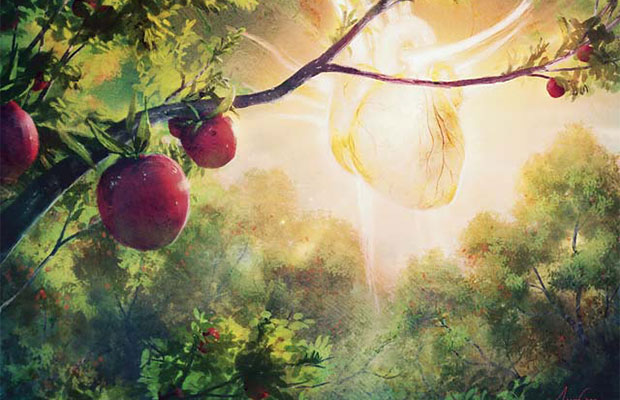 Flavor isn't something limited to describing how a deck feels, and Andrew proved it with a cornucopia of flavorful picks.

I'm sure that most people who saw this question though, "How can I cast as many creatures as possible?" or, "What can I do with all this land?" I, however, thought, "I wonder how many agricultural cards there are in Magic?" And thus, this decklist for a Karametra, God of Harvests Commander deck was born:

1 Soul of the Harvest

Once I had my list, I had to figure out what the game plan was. The first thing that leaped out to me is that Crucible of Worlds allows me to recur Grove of the Guardian for a legion of 8/8 tokens. Second, Seedcradle Witch functions as a mana-sink to pump up the oodles of little tokens I am capable of creating, as I will have PLENTY of mana available. Finally, Plow Through Reito lets me pump up a single unblocked creature while letting me replay my lands for extra benefits (such as Seed the Land Snake tokens).

Overall, this was an eye-opening experience, as I had no idea if there were even enough farming-related cards for a whole deck.

If you grow it, you can play it. Part of what I love about Commander is that you can build almost any kind of deck you'd see in "normal" Magic, but the variety is kicked up to an entirely different level. The idea of a trip to Garden Grove with a deck like this seems like a Vorthos adventure just waiting to happen.

There's even a few gems in here I use as staples in my non-flavorful decks: Druidic Satchel, Diligent Farmhand, and Seedguide Ash find their way into far more of my decks than you'd think. Almost every deck that's off the beaten path has given me a few new tools to try in more play-focused decks. (Homework Assignment: Find something you didn't know about in this deck to try in one of yours. Due Date: Sooner rather than later!)

If flavor is one side, the opposing path should be littered with rules and thoughtful interactions. In Karametra's case, there's one card Richard found to be perfect to pair with her: Primal Surge.

Karametra is the perfect commander to exploit Primal Surge, a card that is incredibly strong and can win a game the turn it is cast by essentially dumping your entire library into the battlefield and giving your creatures haste with Akroma's Memorial (and Elixir of Immortality, in case you go too far and need to reset).

Due to the high mana cost, the deck requires both ramp and card draw to ensure you see Primal Surge in a game and that's where spells like Sylvan Library, Mind's Eye, and Scroll Rack, alongside card-draw favorite, Garruk, help see a lot of your library while Karametra helps you ramp with your forty creatures in the deck!

Creatures range in purpose, from enchantment creatures to enchant-your-beaters, like Krond the Dawn-Clad and Sigarda, Host of Herons (who greatly benefits from any enchantment), to creatures like Indrik Stomphowler and Acidic Slime, who are your artifact- and enchantment-removal in a deck that sees no spells or sorceries.

Perhaps the biggest strength of the deck, however, is the persist combo made possible by Cauldron of Souls to compliment your undying creatures (although Melira is added in for good measure). This, in a sense, makes your creatures Wrath-proof, thus eliminating your need to run any Wrath spells yourself. Even without this benefit, your creatures are likely to out-power your opponents, especially with monstrosity, an ability that lets you cast creatures cheaply, but rewards you later.

Instead of a flavorfully tended garden, Richard's deck is built to maximize the number of triggers Karametra creates, and includes a card that effectively puts the entire library into play for fun and profit. Primal Surge is no joke, as I can attest from personal experience, and the dream of chaining out fatties to stomp the battlefield flat is far more achievable with all the extra land Karametra can provide. Relying on Auras to help dish out the damage otherwise is an easy way to distract your opponents from the secret Surge lying in wait: heroic creatures tend to speak for themselves when seen.

More Decks from Born of the Gods

While I'm still not sure if I'll be building an entire deck around Karametra, God of Harvests, I'm 100% sure she'll be a popular sight across Commander tables soon. I hope you've found a few new tricks to try when you pick up Karametra yourself.

Of course, there's a lot more to Born of the Gods than just Karametra. Whether you answer before or after your Prerelease this weekend, I'd love to know a little more about what you'll be doing with the newest set: Which of your Commander decks is changing the most due to Born of the Gods, and why?

Whether you had to overhaul an existing deck with all new tools or the existence of a new God led to demolishing one deck for an altogether different one, how you're incorporating Born of the Gods into your decks is what I'm after.

Join us next week when we look at some things that just didn't pan out. See you then!