elcome back to Perilous Research, DailyMTG.com's exclusive Magic Online column. Pro Tour Born of the Gods is just nine days away. We'll all be tuning in to the live coverage here, but we can get a lot more out of our viewing experience if we have a strong understanding of the format. Last week, we discussed the changes to the Modern banned list and their implications. Today, we'll be taking a look at the Modern format in its final iteration before the new Pro Tour format. 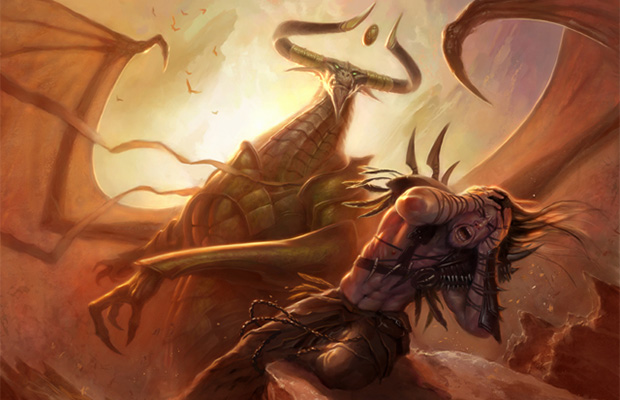 
This may look like a pile of random cards, but it's actually one of the most innovative Modern decks we've seen in some time. Amulet of Vigor provides this deck with a very powerful effect. Using the artifact alongside Ravnica karoos (Simic Growth Chamber, Selesnya Sanctuary, Golgari Rot Farm) allows the deck to operate a turn ahead of its opponent. We can tap our land for mana, play our karoo, then tap it for two mana. Things start getting crazy when we're able to play multiple lands in a turn or we have multiple Amulet of Vigor in play. We get two triggers when we have two Amulets, so our karoos begin making four mana the turn we play them. We can make absurd amounts of mana with an Amulet of Vigor when we're afforded the opportunity to play multiple lands in a single turn via Summer Bloom or Azusa, Lost but Seeking. We can even play a karoo, tap it for mana, then return it to our hand from its own bounce trigger and replay it for two more mana if we don't have more lands or we need the ramp to cast Primeval Titan.


Merfolk has been around for a very long time, but Thassa, God of the Sea and Master of Waves have breathed new life into the archetype. The deck gets out of hand very quickly thanks to nine lords. This deck may suffer from a lot of incidental hate in the coming weeks. We're all excited about playing with Wild Nacatl, and with good reason: 3 power creatures for one mana are hard to come by and all of our opponents with their control decks are well aware of this. We can expect to see more cards like Firespout and Supreme Verdict than we might have before because of Wild Nacatl's unbanning; this is going to have splash damage that hurts other archetypes, and Merfolk definitely falls into that category. That being said, this deck's best draws are close to unbeatable and we shouldn't be surprised if Merfolk makes some waves in Valencia.


In the absence of Wild Nacatl, Robots has been the aggro deck of choice in Modern. Robots aims to use a large number of inexpensive or free artifact creatures to overrun its opponent and control the pace of the game with interactive lands and Arcbound Ravager. The deck has weaknesses to a lot of popular sideboard cards like Ancient Grudge, but those cards are becoming significantly harder to fit into a sideboard that needs to combat dedicated control, blisteringly fast combo, and Zoo decks. This deck suffers from the same splash damage that Merfolk does, but the deck's ability to dump its resources onto a single threat means that it has more resilience, especially when we're able to leave open mana to activate one of our lands. The deck gets a lot of free wins from Cranial Plating, but the interactions available here are incredibly complex. Playing Robots perfectly is close to impossible, and the few who have mastered the ins and outs of the strategy have been rewarded handsomely for their efforts with a number of high-level finishes. We can expect Robots and Zoo to be the biggest aggressive strategies in Valencia, but we can expect Robots to be in a very strong position if players' sideboards aren't prepared.


Red-White-Blue Control and Jund were the dominant decks of last year's World Championship's Modern portion. Red-White-Blue Control aims to control the game with removal and countermagic until it's able to pull far enough into the lead with cantrips, Snapcaster Mage, Planeswalkers, and Sphinx's Revelation. The deck functions similarly to many of the Esper decks in the current Standard format, but the sheer power level of the cards therein makes it a nightmare for the format's most aggressive decks. Wild Nacatl's reintroduction to the format is sure to make this a popular choice in Valencia.


We haven't seen much in the way of Mystical Teachings decks in Modern, but here we have a tremendously powerful control strategy that functions similarly to the Red-White-Blue Control decks while having more decisive haymakers and a much better endgame. The numbers here look very good to me. It's very difficult to quantify how excited we should be about being able to return Snapcaster Mage to our hand with Cruel Ultimatum. The deck isn't quite as strong against the most aggressive decks as its RWU cousin, but the strength of Mystical Teachings in control matchups and the presence of discard for combo matchups makes this a deck to watch out for at Pro Tour Born of the Gods.


We all love a good Pyromancer Ascension deck. This deck aims to win by copying its spells with Pyromancer Ascension, thus drawing a lot of cards and producing a lot of mana, which can be traded in for more cards. Eventually, the deck creates a high enough storm count to fire off a Grapeshot or two for lethal damage. Unfortunately, the deck has been under the radar for a while because of Deathrite Shaman's popularity. It was frustrating when players lost Game One to graveyard hate, but the boogieman is gone and the window has been opened up for players to ascend all over again. We can expect this and other versions of Pyromancer Ascension to be very strong at Pro Tour Born of the Gods.