verybody loves Varolz, the Scar-Striped, or at least that's what I gathered from you. His flourishing body fungus (and likely halitosis) didn't deter a landslide of feedback about cards that work with him, and the palpable excitement about Dragon's Maze in general was clear as well. 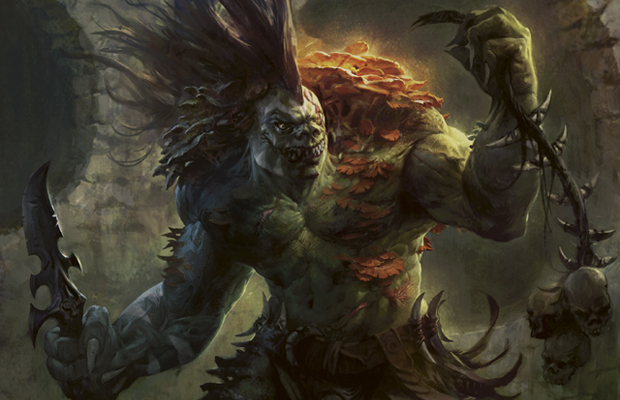 We'll get to Dragon's Maze proper later (you'll want to jump to the end if Varolz isn't your cup of Commander tea), but it's time to look over what Varolz means to you and which six cards you felt were indispensable for the legendary Troll Warrior.

When we first looked at Varolz, the Scar-Striped, we ended with a recap of the many angles of cards we could take with him:

The fact we can easily list this many options for approaching him led to diverse feedback, except for a handful of cards that appears in most of your lists:

At least one of these six cards appeared in most of the lists you sent in, and they all serve different, valuable purposes.

Death's Shadow, and its distant relative Phyrexian Dreadnought, are the epitome of getting bang for your granting-scavenge buck. Generally, casting either card will let you move your creature to the graveyard immediately, where spending just one more mana will put a pile of +1/+1 counters on something. Maximizing your counters to mana spent is an easy idea to follow, but it comes at a price.

Consider Lightning Greaves and Swiftfoot Boots, which grant haste and protection when equipped. This is certainly helpful for Varolz, but these Equipment are staples in Commander that enhance nearly any deck. Supporting your best creatures with Greaves or Boots is helpful at any point in the game. Cards like Death's Shadow are best only with Varolz doing his thing. This means that when Varolz is otherwise unavailable, that titanic Phyrexian Dreadnought is going to seem pretty weak.

It's the same drawback for Corpsejack Menace and Riftsweeper: If you put too many cards into your deck that work exclusively with your commander, you can find yourself in situations where there's little for you to do. I don't mean to say don't put cards like Death's Shadow or Corpsejack Menace into a Varolz deck (I suggested Corpsejack Menace for Varolz, too!), but you want to consider how many picks won't shine without the commanding dance partner.

Many of you naturally picked up on this balance with your suggestions, like Angus:

Thought Gorger and Mindless Automaton are clever ways to make the most of +1/+1 counters. Drawing cards is always powerful, but without Varolz around you'd still be happy to use them. Triskelion and Troll Ascetic are offensive ways to apply counters but still do some work without any extras.

Slaughterhorn, and the green half of the bloodrush family, work wonderfully with Varolz just as described. The pump-all Wild Beastmaster and legendary Ascetic himself, Thrun, the Last Troll, have obvious uses with +1/+1 counters, but are otherwise serviceable (particularly alongside bloodrush).

The self-doubling power of Primordial Hydra was another running theme, such as in Alan's suggestions:

Alan focused in on the idea of using creatures with "when this enters the battlefield" effects (Viridian Shaman, Nekrataal, and friends) as a way to build a bigger backbone. Bone Splinters plays off the fact we want to have extra creatures in the graveyard, and Hell's Caretaker is a great way to play switcheroo for effects on creatures who have passed on. The Return to Ravnica counter-maker Death's Presence is a way to double up counters that won't startle opponents the way Doubling Season would—at least until you start using it.

The card I like most in Alan's list is Fertilid. Having enough mana to scavenge, or scavenge and go on to do other stuff during the turn, is certainly something to keep in mind. As a rule, I try to include plenty of mana sources—and ways to get them—in my Commander decks.

As well as Rob's:

Many of Dio's choices lined up with my suggestions for creatures that come with spells stapled onto them, but the point is clear: Keep the mana flowing, then make the most of it with scavenge. While finding enough lands to do whatever you'd like is effective, another way is to use lands that double up as spells, such as Rob's selection of Rogue's Passage and Shizo, Death's Storehouse. Making a massive, +1/+1-counter-enhanced fatty difficult to block can go a long way toward dealing damage, and works well with targets for counters (like Troll Ascetic).

Please let me know if anyone else was enough of a wise guy to send you a response like this.

No one did, Phineas, but you did give me an easy way to show off basic lands are definitely a good pick for Commander decks. Particularly with green's many ways to fetch basic lands from the library, the humble Swamp and Forest are indeed so good I'd include them in multiples, too.

Going back to Varolz, the Scar-Striped, piling the counters up onto one creature is a risky proposition. Some of you, like Mark, looked wider for placing the +1/+1 counters:

Honorable Mention: Because I'm a Timmy, Armor Thrull. Knowing the faces people would make for playing it, let alone sacking it for the +1/+2 to scavenge it. Priceless.

Armor Thrull is cute, and certainly won't scare anyone, but everything else in Mark's list is solid. Since +1/+1 and -1/-1 counters cancel each other out, using Cauldron of Souls and Puppeteer Clique (among any other creatures with persist) can get silly quickly. Forgotten Ancient, the first creation from You Make the Card, lets you move +1/+1 counters around from it as you see fit when you start your turn, which is ideal when Contagion Engine is around to proliferate. Deity of Scars is a fine fit if you'd prefer to see more Spiritmonger and Ant Queen–type creatures that work well on their own and are dandy to scavenge later.

Yet through all these looks there are a few tacks we didn't yet take, such as (another) Rob's tribal choices:

Tribal always pulls on me harder than any other in Commander, and though Varolz's tribes don't provide much, one is quite potent: Warriors. All six of the cards here have the subtype; the first three are specifically capable of helping said subtype as well. Reassembling Skeleton and Drumhunter are more utility cards that should aid Varolz even without the tribe setting up. Nacatl War-Pride mostly has the opportunity to make a ton of Warriors quite suddenly, and allows Varolz through easier. Bramblewood Paragon, though, is the star, playing in both the Tribal angle and the built-in +1/+1 counter theme Varolz brings with scavenge.

When you look at Varolz you can immediately see that he's a Troll. Rob's Warrior angle is a compelling way to edge our fearless leader into combat. Obsidian Battle-Axe is a free way to grant haste when we bring Varolz to the battlefield, and Bramblewood Paragon ensures he hits hard on the attack. Everything else is gravy, and that's okay too.

Philipp had another way to play victory with Varolz:

Ever since my opponents started tucking my commanders—most of them central pieces of their decks—I started to put alternate win conditions into my decks, or at least ways to get the key components back. My opponents always go for the commander with the most impacting rules text—Varolz basically has a huge target painted on him.

My choice of cards not only protects your Commander, but adds useful tools that under the right circumstances can win the game on their own.

Tucking—putting an opponent's card into his or her library—is a strong way to fight against powerful commanders. Philip's options let him play on despite the potent move by maximizing the idea of a graveyard full of creatures. Morality Shift can dump them all there in one shot, while Living Death and Living End can put them onto the battlefield instead. Tombstone Stairwell is one way to leave creatures in the graveyard but get something for putting them there without Varolz around. Time of Need is the foil to tuck effects, and Eldrazi Monument will stop all but the most powerful of ways to remove creatures from the battlefield.

So where do we end up? Between our first encounter and today's cross-section of Commander choices, there are far too many choices to put into one deck. While you should try things not included as well, this is the final list that I would put together, taking your thoughts into account.


I focused in on creatures that hit the battlefield firing, then turn into delicious Troll-food later in the game. Living Death and Cauldron of Souls make appearances, as do Mindless Automaton, Thought Gorger and Hell's Caretaker. The creativity you brought to the table is stunning, and once Dragon's Maze is released on Magic Online in a few weeks, I'll be sure to give this a test drive.

Of course, Dragon's Maze in its first form will be available at this weekend's Prerelease events, so now's a great time to check out the Gatherer and Dragon's Maze Card Image Gallery to see everything the set has to offer.

You'll also want those tools handy to respond to this week's prompt: Which six cards from Dragon's Maze are you looking forward to most for Commander? This is the special-delivery type prompt, which has its own rules for submitting:

So check out the set, hit up your local Prerelease, and let me know what has you pumped for Commander action. Join us next week when we make the most of a strange situation. See you then!