Yeah, Koth pretty much does everything.

Look at all the big planeswalkers ... The first one was Garruk Wildspeaker, adopted by the State Championships immediately after Lorwyn's release and a Pro Tour winner before season's end. Then there was the first truly format-dominating planeswalker, Ajani Goldmane—powerhouse in White-Black Tokens, excellent in all the Windbrisk Heights decks, from Green-White Tokens to White Weenie Kithkin.

This year's darling planeswalkers, Jace, the Mind Sculptor and Elspeth, Knight-Errant; both allegedly the "best" planeswalker in Standard at one time or another according to different pundits / Premium deck designers. See a trend here?

They all cost four. Even Nissa Revane—who surrounded herself with Nissa's Chosen, Leatherback Baloths, and Wolf tokens in the Eldrazi Green days (before blending back into the shadows)—costs four.

Other planeswalkers have compelling power levels. Sorin Markov and Nicol Bolas, Planeswalker are both Cruel Ultimatum-level control finishers. Both Sarkhan the Mad and Gideon Jura have had their windows, contributed to already-solid strategies (in some cases some of the best strategies), and started excited conversations by the rail-birds. But none of these fives, sixes, or eights has ever rumbled up the collective "I just hope he doesn't top-deck Ajani Goldmane" that that white 'walker did at the pinnacle of Windbrisk Heights in Standard. Not one has wrinkled the number of eyebrows and foreheads of a big Jace.

An on-curve Sorin Markov is much more likely to decisively and proximately dictate who wins the game than an on-curve Jace, the Mind Sculptor ... but there is no question as to which of the two has actually decided more games. Why? Sorin costs six. Cards that cost six mana are both less frequently played and come out in fewer games even when they are included in a deck with cards that cost four. 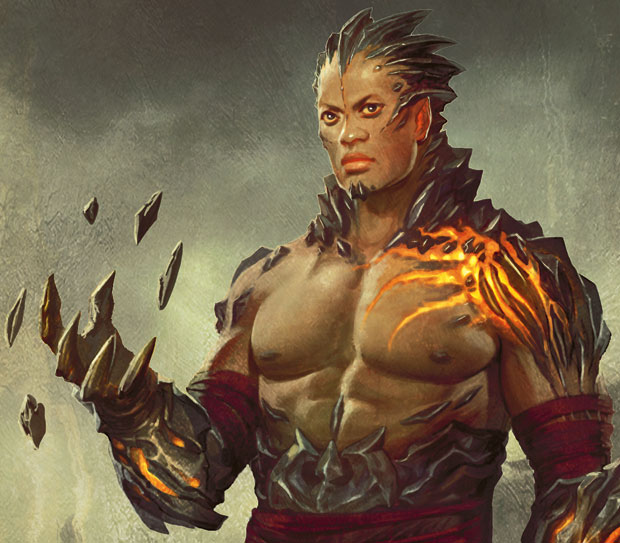 Keep in mind there is nothing really wrong with being the more expensive planeswalker! We remember the finishes that some of the less popular planeswalkers have contributed to. For example that one White-Black Martyr of Sands deck that Conley Woods played with Sorin Markov as a mirror-breaker. That was cool. But with the exception of Jace Beleren (for obvious reasons), the most popular and successful planeswalkers have all been four mana.

Taken a step further, with the exception of Sarkhan Vol (and to a lesser extent Garruk Wildspeaker, which we have already pointed out was the first of the planeswalker tournament performers), all of the four-mana 'walkers have been some degree of full-on awesome.

And so, to Koth of the Hammer we say:

Welcome to the Club

Okay, Koth of the Hammer has a certain amount of pedigree just because it is a four-mana planeswalker. As we've said, Sarkhan Vol basically squandered his education and disappointed his parents, but every other four-mana planeswalker, at some point or another, has had the opponent quivering with sweaty palms, reduced almost to the point of desperation.

Three vigilant 2/2 Spectral Procession tokens are one thing, but do you remember the abject despair represented by one lonely Kitchen Finks and the +1 ability on Ajani Vengeant? How am I ever going to get through?

What about the drip, drip, drip of Ajani Vengeant's +1 ability against control? How am I supposed to get rid of that?

Those aren't even the crazy-busted ones!

How does Koth of the Hammer measure up on the four? What about all the awesome stuff that this particular four-mana planeswalker can do?

The turn Koth of the Hammer comes out, you can immediately jump it to four loyalty and deal 4 damage. Four mana for 4 damage is not prohibitively inefficient. The reigning Japanese National Champion played a card that dealt only 3 damage for four mana (sometimes). No one is saying that making a 4/4 Mountain to bash with is as reliable a damage source as just pointing a burn spell to the opponent's noggin for the same mana cost—but it bears mentioning that the +1 ability on Koth of the Hammer doesn't actually cost you a card. All of a sudden the recurring nature of this ability makes things even more interesting ...

It is not always the case that you want to actually make a 4/4 and attack the turn you play Koth of the Hammer. Like, what if the opponent has a Sun Titan back and ready to block? It's not like you want to throw your Mountain away even if you do want to power up your planeswalker. You can just untap the Mountain, claim your point of loyalty, and do with it what you want. You can, for sake of argument, even tap that Mountain for a fifth mana! 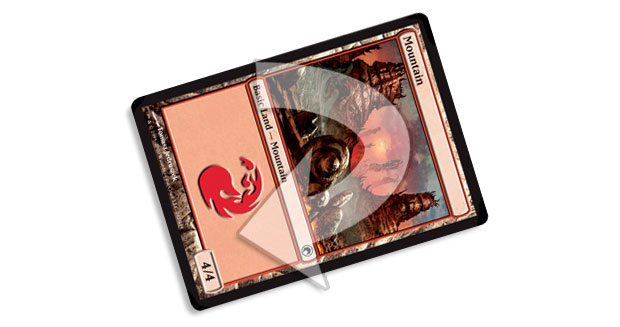 As for the desperation question, it is quite possible that the +1 ability on Koth will be straight up unbeatable for some decks. If you replaced your Path to Exile with Oust upon the Shards of Alara block rotation, you might not be able to stop a 4/4 Mountain. First it knocks down your Wall of Omens, then you stare at the Day of Judgment in your hand. For some builds, the "mere" +1 could be a disaster.

And while it won't come up nearly as often, you can also animate someone else's Mountains. For example you can put a little more oomph into an Earthquake, adding a land destruction element, or go for a slow, grinding, progressive, lockdown with Cunning Sparkmage and Basilisk Collar ... on an opposing deck's mana base. Again, less common, but not "never" by any means.

This is quite the thought-provoking ability. Assume you play Koth of the Hammer on turn four, with four Mountains in play. You can cut Koth down to one loyalty by activating the second ability, and essentially play Koth for free. Say you want to cast a Cyclops Gladiator, too. No problem! Four becomes eight, and provided you can keep both around, the next turn could be a symphony of skull crushing 4/4s.

Now let's mix it up just a little bit. What if you actually have more than four Mountains in play? All of a sudden Koth of the Hammer becomes a kind of variable value Seething Songthat doesn't cost you a card. 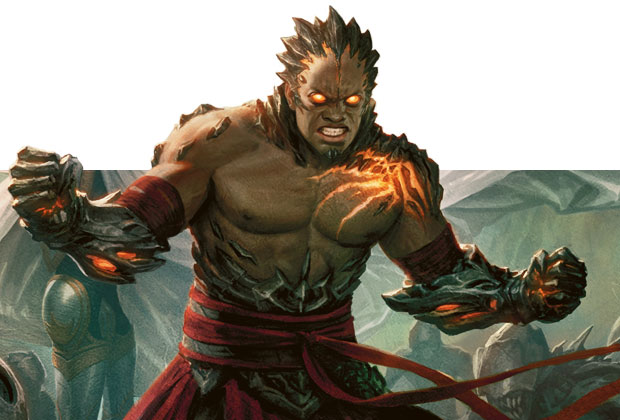 For instance, you can play Koth of the Hammer on turn five, with five Mountains in play, add

with the -2 ability, and tap your last Mountain for six.

How insane is that?

Not only have you jumped the curve to play a turn five Inferno Titan without playing green, but you still have a four-mana planeswalker in play!

Yeah, that seems pretty unbelievable to me, too.

From the "netting mana after turn four" perspective, Koth of the Hammer feels very "Lotus Cobra" like. As in, lots of explosive mana potential, and something the opponent will want to remove before it gets too out of hand.

At this point, having not yet played with Koth of the Hammer, I have no idea how awesome Koth's "ultimate" ability is in a practical sense. If Koth is played in aggressive red decks, you can basically Fireball the opponent for however many Mountains you have in play, presumably "to death." Alternately you can manage creatures, murder planeswalkers ... whatever you want.

This seems like a flexible way to end the game, potentially powerful, but less obviously bonkers than, say, the second ability on Koth.

How Do We Build Decks with Koth of the Hammer?

Koth's first ability asks us to have at least one Mountain. Having more can keep Koth running if you lose the first one when it rumbles in as a creature, but there is no real requirement beyond the first here.

Koth's second ability is tremendously more valuable when you play lots of Mountains. That second ability really rewards a magician for being mono-Mountains. This planeswalker is reminiscent of Searing Blaze in that you can theoretically play it in more than one place, but there are clear signals from R&D about where we might get the most value. 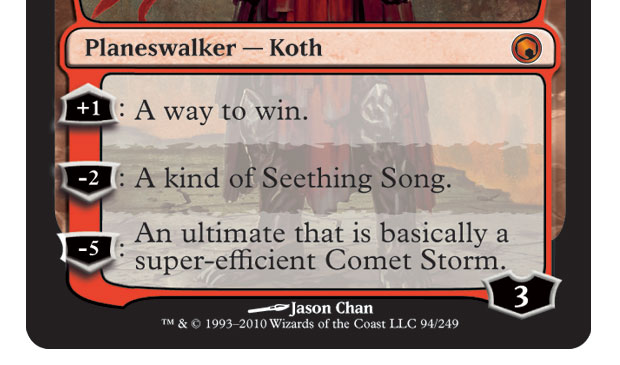 Like I said already, this is a card that essentially does everything.

I could easily see players running all four copies of Koth of the Hammer. Koth is not a particularly durable planeswalker, and what looks like its craziest ability out of the gate will drop it to "anything kills me" range. Alternately, I can see a player ramping Koth up to the emblem ability and putting it directly into the graveyard ... which is not to say you don't want a Koth. That means you have room to play another copy, and probably ample mana to do so.

But where are you going to play all these mono-Mountains planeswalkers? 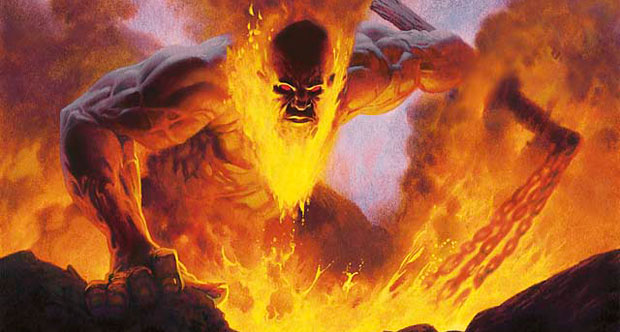 Of course Koth can be played in a variety of decks—and can even contribute as a member of a planeswalker palette—but the superficially obvious home seems like some kind of red deck. Maybe a deck that can deal a lot of damage quickly so that Koth's "ultimate" can be lethal immediately; but maybe also a big(ger) red deck. Maybe not so extreme as all-in red (the -2 ability isn't that kind of a Seething Song) ... but I really like the idea of jumping to Inferno Titan in a mix of cards that might not traditionally support sixes. 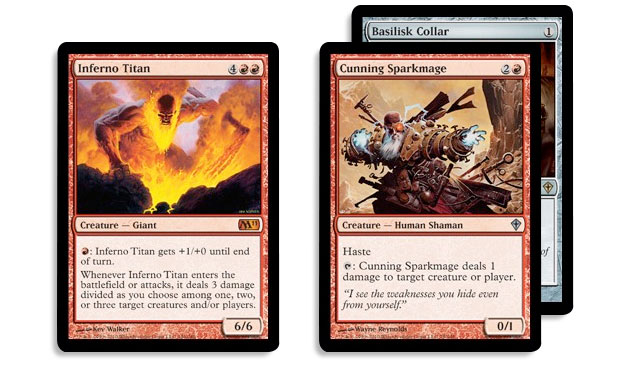 Cunning Sparkmage and Basilisk Collar, anyone? Between the aforementioned combo, efficiency all-stars like Cyclops Gladiator, and such a powerful high end, it is entirely possible that the developing red deck will have the chops to chop up green. Everyone knows a thousand dead Elves is every red mage's secret dream.

This planeswalker seems like a master. After all, he does pretty much everything.