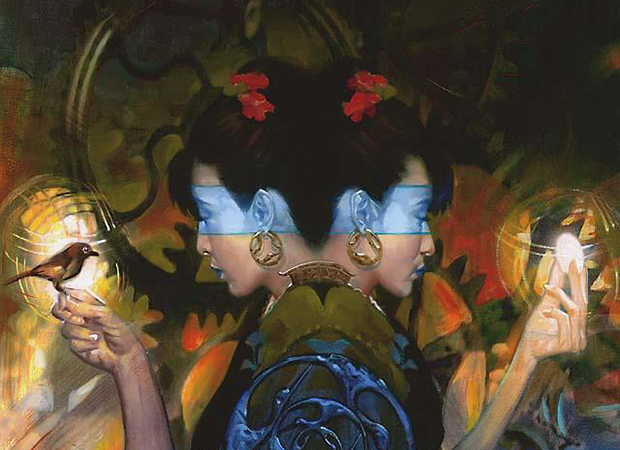 While a game of Magic is typically a ten- to twenty-minute affair, dialing up the player count turns those ten minutes into upwards of an hour or more. Commander and its decks, packed with wacky, wild, all-different-from-each-other cards, adds another wrinkle to things: Just reading and understanding what everyone else is doing takes time.

It isn't fun to sit and watch others do their thing for what can be the length of an entire Standard game before it's just your turn again.

Solving this issue is complicated. Players are people, and everyone will react differently to new information and situations. What works for you and your friends may backfire in a spectacular manner for someone else. Today's article covers several ways others have managed to keep the pace going. Find what might work best for you and give it a try.

The most obvious way to speed the game along is similar to the most obvious way to grind the game to a halt: Use abilities and effects that force other players to do what you want. Just as "prison" decks have their array of artifacts and enchantments to lock down the battlefield, "chaos" decks force everyone into actions that change the game. David shared a deck he uses to that effect:

I have Commander decks specifically designed to speed up the game. My favorite is Ruric Thar, the Unbowed, a classic Gruul build. The goal of the deck is to stop extra turns and tutors via Stranglehold, and just attack. If the card says "players must attack" it went into the deck. Most notable here is Avatar of Slaughter, who forces everyone into combat, with double strike for good measure.

It also aims to sweep enchantments and artifacts off the field, to ensure creatures are unfettered in their quest for lower life totals. Traditional white-blue prison decks are less confining once the way is cleared with a Vandalblast and Multani's Decree.

Ruric Thar keeps cards coming for everyone in the form of Heartwood Storyteller and Rites of Flourishing. Those full hands require extra mana, delivered in the form of Heartbeat of Spring, Mana Flare, Zhur-Taa Ancient, and my personal favorite for flavor and function—Overabundance.

I keep the damage flowing to everyone in the form of Ruric Thar himself, along with Burning-Tree Shaman. These two make sure that if you're not attacking, you're taking damage for doing anything else.

Playing Ruric Thar is a lot of fun, because he's tough but fair. Nobody is singled out, the global effects apply to everyone. Games go much quicker once everyone has extra cards and mana, and creatures are required to get into the red zone!

While David's deck is built to make bashing happen, he included a resource bump for everyone else. That's another classic approach to keeping games moving: ensuring everyone has something awesome to do, and the mana to go do it immediately.

That's the aim of "Group Hug" decks, personified by their usual commander, Phelddagrif. I've discussed Group Hug twice before: once as a favorite Commander archetype some bring to the game, and earlier as something to model for the "Bear Hug" type of deck. This is what Group Hug looks like:

Group Hug gives other players something to do but typically doesn't focus on winning itself. Don't think that those decks can't, though, or you might end up with a face full of Phelddagrif.

Bear Hug is based on the same principle of "giving things to other players," but it also actively looks to deal damage and find a way to win along the way. One of the two decks David (different from above) sent in is what I'd consider a Bear Hug deck, with a Bear Hug commander in Nekusar, the Mindrazer:

I help the speed of games in my playgroup by playing either my Nekusar or Ruhan deck. Nekusar has tons of card draw to help keep things moving and can kill people with Nekusar damage or one of the two combos (Splinter Twin/Deceiver Exarch or Niv-Mizzet/Curiosity). Ruhan speeds things up by cutting through any table talk, and with tons of ways to make Ruhan unblockable and enormous, he usually one-shots people.

My playgroup will often play a variant to help speed things up too. We've played Bang-gic (using roles from Bang! to determine objectives for different players), as well as pentagram, among others.

This deck isn't really very fast by itself and as such doesn't win that often but everyone drawing a bunch of cards does speed up the game.

This deck is still in its first iteration and I haven't been able to put all the cards that I've wanted to in it. That doesn't stop it from killing someone on turn five every now and then. Additionally, the amount of table talk that the pilot of the deck needs to engage in is almost zero, so that also speeds things up.

David touches on a lot of good points here, too:

But there are other ways than just creating decks that push everyone else around. Modifying the rules for Commander can help expedite games too, as Nate shares:

Our group has each player start at 30 life. This can make a dramatic effect on the overall length of the game without giving a very noticeable advantage to the aggressive decks. We also like to cap each game at four players.

My favorite deck is Krenko, Mob Boss. Sometimes the deck will play like an average aggressive tribal deck, but it has the possibility to go off like a combo deck on any given turn to wipe multiple players. I think one issue is that Commander players play with powerful cards, but just because a card is powerful doesn't mean that it can win you the game.

Blood Moon/Magus of the Moon + Goblin King—There are many decks that can produce a steady stream of 1/1 tokens, but if those tokens can't connect with a player, they're not worth much. Making my horde of Goblins unblockable and at least 2 power helps to make them a force that can easily deal 30 to 40 damage each turn. This combination is made very real by other universal pump effects for my Goblins, like Goblin Warchief, Quest for the Goblin Lord, and Shared Animosity.

Goblin War Strike/Mob Justice/Goblin Bombardment/Kyren Negotiations/Furystoke Giant—These are all cards that translate into guaranteed damage. It's very important to have a large amount of redundancy so I'm able to consistently draw into one of these cards that can simply end the game, given I have enough tokens in play.

Insurrection—This is an easy way to spend eight mana to end the game. Many Commander games can come down to massive board stalls where it becomes very difficult for anyone to profitably attack another player. Insurrection isn't a new or innovative choice, but there's a reason it's considered a Commander staple.