elcome back to Perilous Research, DailyMTG.com’s exclusive Magic Online column. Last week, Ryan Spain wrote an excellent piece on the improvements that have been made to the Magic Online Beta Client. Be sure to check it out if you didn’t get a chance to read it. The new Beta Client offers a ton of features that make Magic Online‘s game play more seamless and allow players to operate more as they would in a live game of Magic. The new interface may seem strange at first if you’re used to the original, but your collection, trading, and deck building have undergone changes that should make the new client more user friendly than the current Magic Online. A full list of changes to the beta client can be found here.

The latest Standard format has been in constant flux since its inception. Once again, the pendulum seems to be swinging toward more aggressive strategies as we see aggressive Naya, Gruul, and Red strategies performing well with consistency. 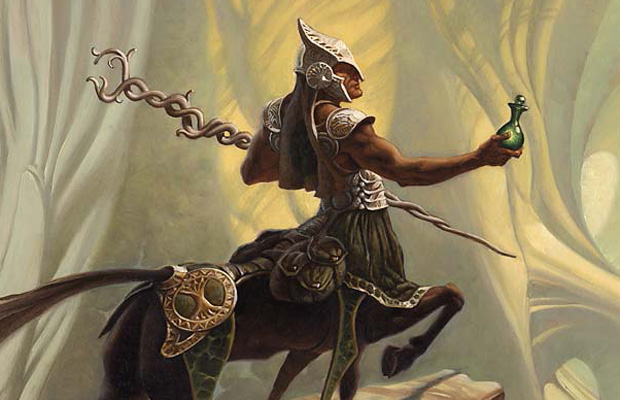 The first deck I’d like to talk about is Naya Humans. The Naya Humans deck was first promoted by Brad Nelson in the week following Pro Tour Gatecrash. The deck performed well on Magic Online in initial testing and it quickly became a mainstream archetype when Nico Matteo Christiansen won Grand Prix Quebec City with it the following weekend. Let’s take a look at a few decklists:


Ofelia’s Naya Humans deck is similar to the original versions played by Nico Christiansen and Brad Nelson. The deck is extremely focused on getting the opponent dead as quickly as possible. A quick look at the deck’s mana curve and creature count reveal the deck’s secret to success. Consistency is the name of the game here. Sure, all the creatures are different, but as long as you’re curving one-drops into two-drops, you’re probably going to be in a pretty good position. The deck is weak to Boros Reckoner, but Pacifism and Fiend Hunter help solve that problem. The deck makes short work of midrange decks that lack the necessary amount of spot removal and runs over anyone who stumbles in the early stages of the game.

4 Experiment One 4 Mayor of Avabruck


Ztrman’s Naya Humans build is heavy on the spells. Most versions of the deck play Thalia, Guardian of Thraben, but Ztrman eschewed the legendary sphere and a bit of consistency for some more power and resilience. It’s no secret that Centaur Healer and Thragtusk are seeing tons of play. The Naya Humans deck wants to end the game as quickly as possible and potential lifegain from the opponent can often result in a large enough speed bump that the Naya Humans deck gets stabilized, at which point it becomes difficult for the deck, which is full of 2/2s, to overcome cards like Boros Reckoner, Thragtusk, and other middle/top-end creatures.

Skullcrack helps alleviate these problems. If you’re confident in your ability to end the game the next turn given your opponent’s current life total and his or her potential board presence, you can happily pass the turn with Skullcrack mana open and ensure victory even through huge amounts of lifegain. Supreme Verdict has also been problematic for Naya Humans, especially when on the draw. Naya Humans likes to dump its hand onto the table as fast as it can with the help of Burning-Tree Emissary; this usually results in massive card advantage swings when Supreme Verdict resolves. Boros Charm does the impossible here, countering that which is uncounterable by giving all your creatures indestructible until the end of the turn. Boros Charm is also useful as a two-mana Flame Javelin to the dome that can often close a game long before an opponent might expect the game to be over.

The next archetype I’m going to look at is Gruul. The original Gruul deck, Saito Gruul, gave a blueprint for one of the most successful aggressive archetypes in Gatecrash Standard. The deck is almost entirely red but splashes green with Burning-Tree Emissary, Rootbound Crag, and Stomping Ground for access to Flinthoof Boar and sometimes Domri Rade, Gyre Sage, Rancor, or Ghor-Clan Rampager. The deck functions beautifully as an aggressive strategy and performs well in aggro mirrors thanks to Boros Reckoner. Let’s take a look at some decklists!


Zydec0_’s Gruul deck is more midrange than any of the other aggressive decks we’re looking at today. The deck’s only one-drop is Stromkirk Noble, which is one of the most underplayed one-drops given the format’s current humanity. Despite only playing four one-drops, the deck still makes its board presence known quickly with Burning-Tree Emissary’s incredible power. The deck battles board sweepers and lifegain by going over the top with Thundermaw Hellkite and Ghor-Clan Rampager in the mid- to endgame. It’s still a Hellrider deck, so getting on the board quickly is important and Lightning Mauler alongside a hard-cast Ghor-Clan Rampager is surprisingly good at putting people in awkward situations. Blind Obedience has significantly declined in popularity and I expect Hellrider strategies to pick up a lot of steam as the format moves forward, or until Blind Obedience is regularly played again.


Many players have wanted to play Rancor in their Gruul lists, but the mana always seemed too prohibitive. You see, Boros Reckoner makes is difficult to play any number of basic Forests and four Rootbound Crags and Stomping Grounds aren’t always going to be enough to cast a green spell on the early turns after you’ve already used Burning-Tree Emissary to advance your board state. Keitattt has an excellent fix for this problem, though. By including two copies of Temple Garden in the deck, Keitatt can still reliably cast Boros Reckoner on the third turn but also picks up extra sources of green mana that make playing Rancor, an excellent card for the deck, a real and reasonable endeavor. Beyond this innovation, which is actually quite big, the deck is similar to the original Saito Gruul. I’ve put this deck together on Magic Online and I’ve been doing well with it in the heads-up queues. If I had to pick an aggressive deck that I felt had longevity, this would be the list.


Berserker! Do you like pumping creatures to massive proportions only to Fling them at your opponent’s face? Do you like attacking for 20 damage with Rush of Blood? Well then I’ve got the deck for you. Scrubaroo brings us an exciting aggressive Gruul Strategy that utilizes the Bloodrush mechanic to its maximum potential. It’s easy to steal games out of nowhere with this deck and players without the appropriate amount of spot removal will quickly find themselves on the receiving end of a quick kill. This deck may seem wonky, but it has a huge surprise factor and there won’t be many players playing around cards like Rush of Blood or Fling. Madcap Skills makes another appearance in a successful Standard deck, proving that Auras aren’t really the same trap we’ve always thought they were.

Post-board, this deck gets access to more of the same. Sideboarding in Reckless Waif on the play against decks without one-drops is very Wild Nacatl. Mark of Mutiny allows this deck to steal games where the opponent may leave open mana and a blocker in hopes of getting a two-for-one when the deck tries to bloodrush. I’m not sure if this deck will continue to grow in popularity, but the deck is absolutely hilarious and I’m expecting it to take at least another few tournaments by surprise before the jig is up.

Finally, we’re going to talk about Mono-Red. Pure Red strategies are often overlooked in a format with such perfect mana, but Mono-Red decks never worry about mana issues and their cards are reasonably well positioned given the current Standard metagame. Let’s take a look at a decklist!


Ashok correctly identified the format’s redness and chose to play a full play set of Volcanic Strength in the main deck here. Sure, cards like Ash Zealot and Boros Reckoner are also well-positioned, but Volcanic Strength gives this deck a huge edge in aggressive mirrors where it guarantees a reasonable chunk of damage and usually forces the opponent into a race. Volcanic Strength is also a nice addition to the mono-red strategy because it makes the deck’s Burning-Tree Emissary much stronger than it would be otherwise in the mono-red deck. The deck takes no damage from its lands, so pure race situations are a welcome occurrence. Perhaps most importantly, the deck plays a full four copies of Pillar of Flame and Searing Spear, giving it the defensive structure necessary to deal with the early turns from Naya Humans. I expect decks like this, or perhaps Gruul and/or Naya decks using Volcanic Strength, to have a lot of success in the coming week.

Standard has been heating up. Aggressive strategies have proven how successful they can be, even in the face of such efficient hate like Thragtusk and Centaur Healer. It may be time for Trostani, Selesnya’s Voice to make an appearance. Red-White-Blue strategies that have performed less than optimally in the past few weeks may also start to improve their results given the format’s susceptibility to cheap removal in conjunction with Snapcaster Mage. However, the looming prospect of Esper Control decks may continue to keep Blue Boros Reckoner decks out of the limelight. Stay tuned to Perilous Research to keep your finger on the pulse of the Standard metagame!