he power of the gods of Theros are closer than ever to the mortal realm. 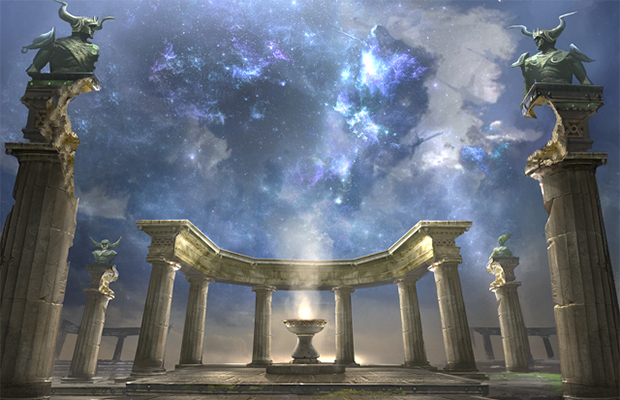 Born of the Gods has arrived and there're plenty of new blessings to try from the pantheon of Theros. Whatever the favors you choose, finding new choices is among the most exciting features of a new set. Since Commander relies so heavily on individual cards, the odds of finding something new is almost a guaranteed success.

At least that's what I've found in my own experience.

Before diving into your updates and decks, there's one shift I've been keen to work out for myself: switching my Kaervek the Merciless deck over to a Mogis, God of Slaughter deck. Here's where I ended up:

What did I change over? Not that much, but the net effect is significant. First and foremost, Kaervek the Merciless is gone, replaced by an easier-to-cast and indestructible way to apply pressure to opponents. Backed by a suite of battlefield-clearing removal, the odds that opponents may not be able to choose to sacrifice a creature is good.

Other changes include new ways to chip away at opponents' life totals (Fate Unraveler replacing Nevinyrral's Disk), applying different pressure to opponents' creatures (Defiler of Souls replacing Mutilate), and creating an indestructible monster from the graveyard of an unsuspecting enemy (Fated Return replacing Army of the Damned). There were also two "side" upgrades, with Astral Cornucopia replacing Rakdos Keyrune (so we can go even bigger with mana for Earthquake or Drain Life) and Temple of Malice replacing Shizo, Death's Storehouse (since a little massaging and mana fixing is better than granting fear for this deck).

Changing a deck to better suit it's goal (blowing away opponents' life totals) is one road to travel. Another road is to overhaul the toolbox your commander gives you access to.

Most of my seventeen Commander decks won't be seeing more that the inclusion of an on-color scry land, if that much. Captain Sisay will also get Karametra, God of Harvests, but Hanna, Ship's Navigator is loading up with ten cards:

It's almost sinful how well she plays with the enchantment creatures.

Hanna, Ship's Navigator comes packed with a potent ability for the denizens of Theros: "

: Return target artifact or enchantment card from your graveyard to your hand." While our two visits to Mirrodin/New Phyrexia (Spoiler alert!) is typically where I've seen Hanna work her magic, the enchantment-laden options from Born of the Gods feels like a tantalizing tease for what may come in Journey into Nyx.

Getting to pull enchantments that are creatures (like Gods) out of your deck on demand is strong, apparently. So is creating loops thanks to God-delivered powers.

Just want to quickly say, big fan, and I love all the articles you do. Now:

Grimgrin's It's My Party, And We'll Moan If We Want To

1 Undead Warchief 1 Liliana's Reaver 1 Erebos, God of the Dead 1 Undead Alchemist 1 Door of Destinies 1 Grimoire of the Dead 1 Whip of Erebos 1 Diabolic Tutor 1 Endless Ranks of the Dead 1 Grave Pact 1 Call to the Kindred 1 Liliana of the Dark Realms

Now, at first glance, it's a pretty standard Zombie beatdown Commander deck. Get them on the field, get them back from the grave, take your opponents' grave, and use it against them, survive battlefield wipe after field wipe, etc.

Now, besides the addition of a couple of the Zombies from Born of the Gods and a rather Champion of Stray Souls, the only real notable addition to the deck is Phenax, God of Deception, soon to be the most important part of this deck. Why, do you ask? Well, turns out that Phenax and Grimgrin were meant to be best buddies. One of them likes making creatures tap, while the other likes to untap, often. Getting it? Throw in a Rooftop Storm and a Gravecrawler, and BAM! mill out deck combo.

Admittedly not the best, but I think one of the most fun. Optional: Undead Alchemist joins the party and turns a good chunk of milled cards into more 2/2 black partygoers. I hope some Zombie brought chips.

Thank you for all you're doing to spread info about the greatest format in the Multiverse.

Hoping to see you across a table sometime,

It's easy to look at Born of the Gods and just think about enchantments. Here, Thomas found a few tweaks for a tribal deck with making the most of what a new God can do. With all the Grecian-inspired heroes and Gods lounging about I had overlooked that there's plenty of undead to go around on Theros, as Alex can attest:

As I had mentioned last time, my preferred guild is Golgari and my Jarad deck is my favorite weapon for battle. What started off years ago as a Darigaaz, the Igniter "good stuff" deck has been parsed and whittled down to this sleek weapon that can win the game on multiple axes. It combines my love of tokens with my love of moving things in and out of the graveyard—nothing stays dead under Jarad's command for long. Sewer Nemesis, Splinterfright, and Hermit Druid turbo charge my graveyard while Life from the Loam and Phyrexian Reclamation help me cherry pick what I get back.

There is a lot of life payment in this deck so Disciple of Griselbrand, Grim Feast, Whip of Erebos, and the Blood Artist/Falkenrath Noble tag team keep me healthy enough to execute. Finally, Grave Pact helps me keep my adversaries under control and allows my large monsters to do their thing. Honestly, it is hard to type up every interaction since so many cards work in tandem.

After Theros gave me gifts in Whip of Erebos, Nighthowler, and Pharika's Mender (I never realized how many enchantments I relied on until the Gorgon came along), I had high hopes for Born of the Gods. While it didn't add much to the deck, the new cards definitely help. Satyr Wayfinder replaces Yavimaya Granger as a way to fill my graveyard and access any land (which is easier to achieve with Sylvan Library). Scourge of Skola Vale might make it in if a current card starts to disappoint me. Nessian Demolok also comes in for Indrik Stomphowler since it provides an interesting political tool while also helping to shore up this deck's soft spot for Planeswalkers and noncreature permanents.

You see, I built this deck to take advantage of Dark Confidant and Dark Tutelage and as such I set a limit for myself: nothing in this deck will cost more than five mana. This is why some cards (like Woodfall Primus) are notably absent. I love this restriction as it forces me to look for different cards. It's also cool to watch my opponents' faces as they realize they're going to lose to a deck running Dark Confidant.

Just because you aren't changing many things doesn't mean the differences aren't noticeable. When you have extra pressure to find just the right cards, every change adds up in big ways. Thanks Alex!

Alex's angle for running Jarad, Golgari Lich Lord is to apply a cost restriction across the entire deck: Less than six mana or bust. Some of you really enjoy building a deck with additional requirements applied, so I'd like to learn more about them: What requirement have you build a deck around, and why?

I hope Born of the Gods has left you feeling as inspired as me. Join us next week when we unlock the potential hidden in Derevi, Empyrial Tactician. See you then!