ast weekend, Grand Prix Louisville showcased the latest and most powerful strategies in Standard. Magic needs heroes, and there was no shortage of heroism at Kentucky's Grand Prix. A few days prior to the Grand Prix, Todd Anderson had made a new black devotion deck that he and his friends deemed the deck to play for the weekend. Five players arrived on site on Saturday morning armed with the latest dark technology. Of those five, three (Brian Braun-Duin, Brad Nelson, and Todd Anderson) found themselves in the Top 8. 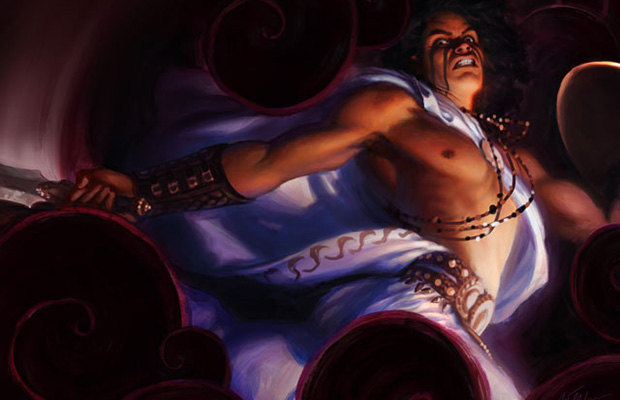 Brian Braun-Duin has been quietly amassing his own resume over the last couple years. Braun-Duin was my teammate for Pro Tour Theros, and in the month leading up to that event I was able to witness his tuning prowess and work ethic firsthand. Last weekend, Braun-Duin heroically bested 1,046 others to be crowned the Grand Prix Louisville champion. This means that Braun-Duin will be qualified for the upcoming Pro Tour Born of the Gods in Valencia, Spain, and it puts him in a strong position to achieve Gold status on the Pro Tour. I am confident that Braun-Duin has what it takes to play at the highest level and I'm looking forward to his rise to power.

Let's look at some decklists!


Black Devotion has come out of obscurity and found itself atop the new Standard metagame. The deck uses tons of spot removal and disruption to survive the early turns. It eventually grinds out card advantage with Erebos, God of the Dead and Underworld Connections, until its opponent helplessly flounders and is overwhelmed by a pack of rats or Gray Merchant of Asphodel triggers. Temple of Deceit allows the deck to cast blue spells found with Nightveil Specter—these can be changed to Temple of Silence if the format starts leaning white instead of blue.

Nightveil Specter gives us three blue devotion even though we're spending black mana to cast it. This ensures that Nightveil Spectered Master of Waves makes a ton of Elemental tokens. The deck preys on midrange and control strategies, but struggles to keep up against the most aggressive decks. In the coming weeks, we can expect White Weenie variants, aggressive Red strategies, and green-white decks to experience a resurgence in the wake of Black Devotion's dominance. Underworld Connections in conjunction with tons of lifegain makes this deck extremely difficult to contend with in a long game. The best way to combat this deck is to run it over quickly.

4 Master of Waves 2 Bident of Thassa 2 Jace, Architect of Thought

4 Master of Waves 4 Thassa, God of the Sea 2 Jace, Architect of Thought
75 Cards


The Blue Devotion decks are getting beat up as of late on Magic Online, but it seems unlikely that Esper control decks will continue to do well in an environment dominated by Black Devotion. We can expect the Blue Devotion decks to oscillate from the bottom to the top of the totem pole on Magic Online in step with Supreme Verdict's popularity. Ætherling gives the deck a great sideboard plan against things like Black Devotion and Triton Tactics significantly increases the deck's chance to survive the early turns against red before the game can be taken over with Master of Waves.


This deck is a less-aggressive style of Blue Devotion. The deck's Supreme Verdict comes completely out of nowhere and can often leave an opponent with no cards in hand. This won't be the case once players catch on to the deck, but it's still fringe enough that we should be able to catch our opponent off-guard. Nightveil Specter seems pretty difficult to cast here, and I might cut a Nykthos, Shrine to Nyx or two in favor of more islands. That being said, the deck plays a lot of Standard's most powerful cards and I wouldn't be surprised if this type of strategy became one of the major players in the new Standard.


It's strange seeing a Suicide Black deck at 4–0 in a Standard Daily event, but it makes sense when you think about it. Tormented Hero and Rakdos Cackler give the deck eight one-mana creatures with 2 power. Lifebane Zombie represents a consistent source of damage against all the other decks that aren't Black Devotion while also seriously disrupting decks like White-Black Midrange, Gruul Devotion, and Red-Green Midrange. Xathrid Necromancer makes the deck resistant to Supreme Verdict. Doom Blade, Hero's Downfall, and Thoughtseize all give the deck enough disruption to power through most opposing game plans. The deck does, however, seem very weak to Black Devotion, especially on the draw, and this may be a nail in the coffin until the Black Devotion deck wanes in popularity a bit. This is likely a good aggressive strategy to have in your back pocket if the format becomes dominated by Supreme Verdict control decks and Green-White or Red-Green midrange strategies.


I'm a HUGE fan of the Gruul Devotion strategy. The deck goes bigger faster than anyone else and its ideal draws are unbeatable. It can struggle against decks with a lot of spot removal and disruption, but the most devoted strategies are very good matchups. The thing that I find most appealing about Gruul Devotion is its ability to dominate any opponent with the right draw. I've recently added two copies of Primeval Bounty to my sideboard in an effort to battle the Black Devotion decks and I've been very impressed with my results.


Despite a poor performance at Pro Tour Theros, Red Devotion decks like the one played by Team ChannelFireball have become successful on Magic Online in the face of Esper Control and Black Devotion, which are both good matchups. The deck is straightforward, its Burning-Tree Emissary is reasonably weak if it isn't drawn in multiples. Haste is very good against Black Devotion and Esper Control and there's no shortage of the keyword in this 75.


This deck has a lot of haste and its strong removal package makes it a nightmare for Blue Devotion strategies. The deck can struggle with Esper Control if it draws too much burn and not enough Planeswalkers and hasty monsters. This can be offset with Chandra's Phoenix, but we're not guaranteed to draw our key 2/2 haste flier. Postboard, the deck can become an anti-control-black devotion monster. This deck might struggle to deal with a postboarded Gruul Devotion strategy and it seems somewhat draw dependent, but the overall plan here seems like a very good place to be in the current Standard format.

This should give you a strong understanding of the decks you'll run into when playing in Standard events. Esper Control seems to be on the decline and Blue Devotion decks should be well-positioned in the coming weeks. I'm confident this Standard format will continue to evolve in the coming months; the decks are dynamic enough that all of them are beatable if people want to. Going forward, I'll be sure to keep my finger on the pulse of the Standard format.

Next week, we'll be taking a look at some of Magic Online's other formats.