elcome back to Perilous Research! This is a huge week for Magic: We've got a Pro Tour to watch less than 48 hours from now, we just watched one of the most exciting Modern Grand Prix events ever, and Vintage Masters previews are doing a great job of getting our blood pumping. Today, we'll be taking a look at an exciting card from Vintage Masters!

Vintage Masters will give Magic Online players an opportunity to play with the most powerful and storied cards of the game's great history. Vintage has historically been a format that excluded the majority of Magic's community. There simply aren't enough copies of cards like Black Lotus to make the format accessible to the masses.

Vintage Masters is a Magic Online–only set that opens the door for all of us to get a crack at Magic's most complex Constructed format. The Vintage format allows for use of cards from all sets, but there's a reasonably sized restricted list of cards that we can only play one copy of. Cards that involve dexterity, like Chaos Orb or Falling Star, are banned, along with other cards that no longer work in an actual game of Magic, like Shahrazad. Here are the full banned and restricted lists for Vintage.

Today's preview card is a puzzle piece. On its surface, it seems like a convoluted hoop to jump through, but when surrounded by the right combination of cards it becomes a potent weapon. Many of you are already familiar with the horror about to be unleashed: 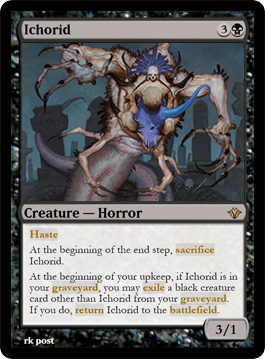 Sure, Ichorid has been a piece of some versions of Dredge in Legacy, and it experienced some success in Extended alongside Psychatog many years ago, but how will we be using Ichorid in Vintage? After all, wouldn't we be crazy to play a deck without the likes of Ancestral Recall, Black Lotus, and Time Walk?

No, we wouldn't. Ichorid is a valuable piece to the Vintage combo strategy known as Manaless Dredge. Manaless Dredge uses cards like Bazaar of Baghdad to quickly fill its graveyard and attack strategies from a direction that's often unexpected. I'm just an aspiring Vintage Master, but I've always enjoyed a good deck-building exercise. Let's see if we can put together a Manaless Dredge strategy that can stand up to the power of other Vintage strategies.

The first thing we'll need is a hefty dose of the dredge mechanic. Golgari Grave-Troll is the most powerful dredge option available, so we'll definitely be playing four copies of that, Stinkweed Imp, Shambling Shell, and Golgari Thug are black creatures that work well with Ichorid while also filling our graveyard with the dredge mechanic.

We can hypercharge our dredging process with cards that allow us to draw without spending any mana. Cards like Street Wraith and Gitaxian Probe can effectively give us draws that we can use to dredge without actually needing any mana. We can also play a single copy of Griselbrand to Dread Return for a game-ending septuple dredge on the second or third turn. Griselbrand also happens to be a black creature for our Ichorid or Unmask.

We'll need a way to win the game: The combination of Narcomoeba, Bridge from Below, Dread Return, Ichorid, and Flame-Kin Zealot is a tried-and-tested route to victory for these types of strategies. We'll be dumping our whole library into the graveyard within the first few turns of the game. In doing so, we'll find ourselves with a few copies of Narcomoeba on the battlefield. We can then sacrifice our Narcomoebas to cast Dread Return, making a ton of Zombies in the process thanks to all the Bridge from Belows in our graveyard. Dread Return will target Flame-Kin Zealot, which will give our army of Zombies haste and a nice power boost. We'll be attacking for well over 40 points of hasty damage as early as the second or third turn in many games.

This is Vintage, so we'll need to be disrupting our opponent so we don't get blown out by a timely Force of Will, Surgical Extraction, or something else. Playing Vintage without a form of disruption opens us up to losing on the second or third turn to many different card combinations. Unmask is essentially a free Thoughtseize for a deck like this. Chalice of the Void is another great disruptive option, especially on the play. Chalice of the Void counters all of our opponent's Moxes, Black Lotus, Lotus Petal, Tormod's Crypt, and Engineered Explosives for zero, rendering many decks significantly neutered while not affecting our game plan. Our spells may be cast without paying their mana cost, but their converted mana cost is still as printed on the cards. Cabal Therapy is an essential disruptive element here; it produces a lot of Zombies with Bridge from Below and gives us a green light to go off once we get a look at our opponent's hand.

Let's put this all together and see what our deck looks like:

4 Serum Powder 1 Chalice of the Void

One of the most attractive parts of this deck is that we don't need to acquire hard-to-find cards like the Power Nine or dual lands to compete. The deck as a whole runs beautifully.

Here's a recap on how we should be attempting to pilot our Ichorid-centric Vintage creation:

Mulliganing properly is of utmost importance with a deck like this. We need to find our Bazaar of Baghdad. Serum Powder should be used aggressively. It's OK to mulligan down to two or three cards in an effort to find Bazaar of Baghdad. We can be greedy, though; if we have an opener with Bazaar of Baghdad, but one non-Golgari Grave-Troll or zero dredgers and little in the way of disruption, then it's probably correct to go to six cards. Our range tightens significantly on six cards, but Serum Powder gives us quite a few cracks at finding a nice starter.

Once we have our Bazaar of Baghdad opener, we want to play it and discard some dredge creatures after we've used any copies of Unmask or Chalice of the Void.

Then, on our second turn, we can activate our Bazaar of Baghdad again, triggering dredge and discarding more dredge creatures. Then we should be firing off the Gitaxian Probes and Street Wraiths we've found. This should find us some copies of Cabal Therapy and Narcomoeba.

If we don't have the necessary ingredients to kill our opponent through the presumed disruption at this point, and we usually won't, we can pick apart our opponent's hand with Cabal Therapy and make some Zombies in the process with Bridge from Below. The following turn, we should be returning all possible copies of Ichorid from our Graveyard to the battlefield, dredging the remainder of our library, and using Dread Return to get back Flame-Kin Zealot for a massive attack. 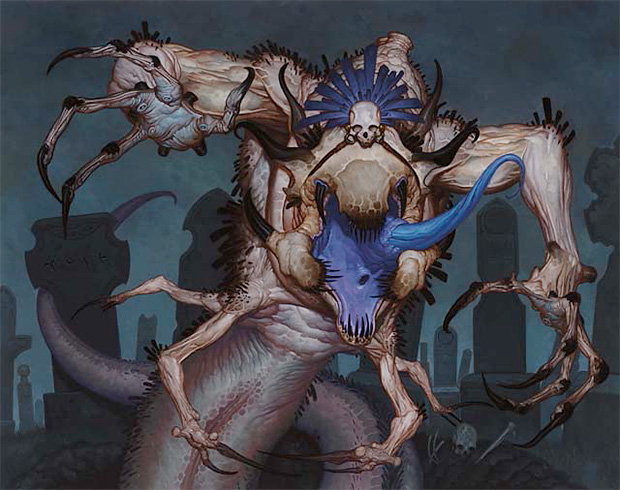 It's been many years since I've attempted to brew up a Vintage deck. This exercise has me eagerly awaiting the release of Vintage Masters. Join me and thousands of others on Magic Online in the coming weeks for Vintage Masters, a set that's sure to change the way we think about Constructed Magic forever.

Also, coverage of Pro Tour Journey into Nyx kicks off tomorrow morning, May 16, 2014. Don't miss your opportunity to follow the best players in the world as they vie for glory in the unexplored Journey into Nyx Block Constructed format!