The Hunt is On

ew sets are always an exciting time for us. Between the weeks of previews to get a taste of what's to come and the Prerelease, where our expectations meet reality, our ideas for the latest cards remain malleable. When the dust settles and the set goes on sale (Tomorrow!), our best intentions get put to the test.

And those intentions aren't necessarily uncommon ones either.

It's part of why I love looking at new cards so much: experiencing those "Oh! You too!" moments where an idea I have happened to be shared with a few fellow players. Feeling like you're part of something bigger is a guilty pleasure I'd guess many of you share, too. 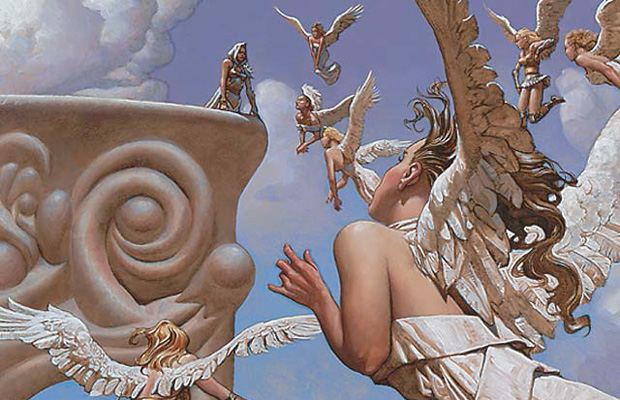 At least, I'm hopeful, since your thoughts on Magic 2014 for Commander had a few common threads between them.

So what did you find exciting for Commander in Magic 2014? While there was plenty of diversity in the answers, there is one card that stood above them all in terms of responses: Strionic Resonator. Nathan's excitement was pretty typical:

I'm a super Timmy/Johnny, so I'm totally stoked for Strionic Resonator! My Commander deck is Zirilan of the Claw, and my favorite card in it is Sundial of the Infinite. The Sundial can be used for all sorts of shenanigans (beyond the bread-and-butter utility of making my Dragons stick around), and I expect that I will get similar mileage out of the Resonator: Bogardan Hellkite for 10 damage, Illusionist's Bracers for triple Dragons, and so on.

Here's a short, nowhere near exhaustive, list of ideas pitched behind Strionic Resonator:

The possibilities aren't endless, but the potential for shenanigans in triggers-laden Commander games certainly feels that way. As Ben put it:

Strionic Resonator is really cool. Many of the most popular Commander cards use triggered abilities, making Strionic Resonator synergistic in almost any deck. I think it will appeal to every psychograph, and few cards could say the same.
Grim Return is my favorite. It is an easily cast instant. It can disrupt graveyard combo, steal a bomb, or save your own creature. Simply recycling someone's Solemn Simulacrum is a strong play for three. This versatility will make it valuable at any time, and I can't wait to put one in my Lord of Tresserhorn deck.

There is an ever-shifting lists of Commander staples—cards that "go into and work with any deck"—and I'd be shocked to see Strionic Resonator left off of many going forward. It's Ben's other pick, Grim Return, that might not make as many decks but works in wonderful ways.

The card that Grim Return reminds me the most of is actually a blue card: Clone. Similarly restrictive, Clone gets you the best creature on the battlefield, often at a steep discount in mana and with an easy-to-cast mana cost. (And if you're feeling clever, you can Grim Return a Clone to copy something that didn't die that turn.)

The card from Magic 2014 that I'm most excited about using in Commander is Windreader Sphinx.
I run an Isperia the Inscrutable deck and this new Sphinx is a fantastic card that can be easily tutored for and makes drawing answers and wacky board sweepers like Dimensional Breach easier.

Flying high is certainly more rewarding with Windreader Sphinx around, although I'm not convinced Isperia the Inscrutable is best place for it: Kangee, Aerie Keeper is the commander I'd be terrified to find playing flying attacker-based card-drawing engines.

That's the secret behind Windreader Sphinx: It turns normally unimpressive 1/1 Bird or Spirit tokens into repeatable ways to draw cards. Even if the token dies (there are Dragons hovering about most Commander games I've seen), getting to draw a card is often a great deal even once.

Also, anything that keeps games moving (Attacks!) is OK in my book.

Rahil is excited for a card that will certainly get a game going:

I'm really excited to add Rise of the Dark Realms to my Teysa, Envoy of Ghosts Commander deck. The deck is mainly used for multiplayer games where I can play politically and still trigger extort a billion times per game. Any time I'm not extorting, I'm wiping the board with white and black's many mass-removal spells. When that happens, I'd like to have some creatures left standing afterwards.
Rise of the Dark Realms helps accomplish just that by letting me keep my extort guys, and what's more: I also get all my opponents' precious threats and goodies!

The cackles of delight when this card resolved have been heard the world over already. I know there are plenty of fans of Plague Wind and Decree of Pain out there, and Rise of the Dark Realms is a no-brainer to add alongside it. Unlike the destructive, battlefield-emptying effects black is known for, Rise of the Dark Realms is the first "all upside for you" Living Death. Getting everything from graveyards now isn't necessarily predicated on killing things in play.

It's a handy feature when you want to keep the toys you've already reanimated. (See Grim Return above.)

But I don't want to get carried away. Sometimes our exuberance can get the better of us, like with Tom:

Angelic Overseer is certainly a tricky card in Human decks. Being indestructible has its advantages, and I have no doubts that the Overseer has slain its fair share of players. But as sweet as Seraph of the Sword is (Easier to cast too!), it isn't quite like Angelic Overseer with a Human hanging around.

Seraph of the Sword only prevents combat damage from happening to it. This means that, despite it surviving tangling with Dragons, Beasts, and Zombies that are outlandishly larger, the humble Lighting Bolt will strike it down. Seraph of the Sword is still a fine card, as 3/3 flying creatures with abilities for four mana are, but I wouldn't be so quick to call it a new Overseer.

Devout Invocation, however, is a card that brings a tear to my eye. When I previewed Entreat the Angels I thought I had shared the sweetest Angel-making card around. "Oops! All the Angels!" was a fun moment that would pop up when I had a Rhys the Redeemed deck readied.

When I want to win with creatures—token creatures—in Commander, I look to Eldrazi Monument; Avacyn, Angel of Hope; or the ultimate ability of Elspeth, Knight-Errant to ensure my teeming swarm lives to strike home. However, oodles of 1/1s on the ground often doesn't cut it, particularly when the aforementioned Dragons swoop in from above to attack me anyway. Devout Invocation solves both problems neatly, giving us both the aerial defenders needed to set up our attack and the powerhouse punchers required to drop the higher life totals found in Commander.

In the interest of full disclosure, I love token decks so much I wrote a "Choose Your Own Adventure"-style Commander-deck-creation article featuring multiple flavors of token-making. Take my mutual excitement for Devout Invocation for what you will.

But don't discount a very different card, courtesy of Chase:

Bogbrew Witch. It might be an understatement, but a lot of people have been unexcited about this card. I don't know why, because in a black deck this lets you get life return, get a sacrifice engine, and once Dawn of the Dead is out... good game.

What Chase is chasing after here is the entire Bogbrew Witch engine, with Bubbling Cauldron and Festering Newt to go with it. Bruce Richard wrote about the trio (on my birthday no less!), and it's a strong contender for the most flavorful cards I'd never want to actually taste. It's a three-card contraption, so adding another (like Dawn of the Dead or Oversold Cemetery) that gets back our Newt each turn isn't that much of a stretch.

But boy does it make a difference.

Plied alongside creatures with extort (like the deck Rahil hinted at above), it's easy to see how the lifegain can get out of hand and quickly drain our hapless opponents. It's ambitious, intricate, and flavorful: Everything that Commander is.

The Past is Present Again

I hope your Magic 2014 release events this weekend are a smashing success and that your new packs bring you a few cards you haven't yet had the chance to try out. I know I'm hoping for the best!

Next week begins a two-part wind down of the Return to Ravnica block for Commander, where I'd already asked you to share decks built around the legendary heroes of our recent visit to the city-plane. This week's prompt is a little trickier, but I trust you're up for the challenge: What are the six cards from the Return to Ravnica block that made the biggest impact for you in Commander?

Maybe a specific legendary creature inspired you to build a deck for the first time. Perhaps several cards featuring a mechanic set your 100-card-deck world afire. Whichever cards from Return to Ravnica, Gatecrash, or Dragon's Maze made the most impact for you are the cards you should be sharing. I'm looking forward to your favorites!

Join us next week when we get knee-deep in big decklists. See you then!