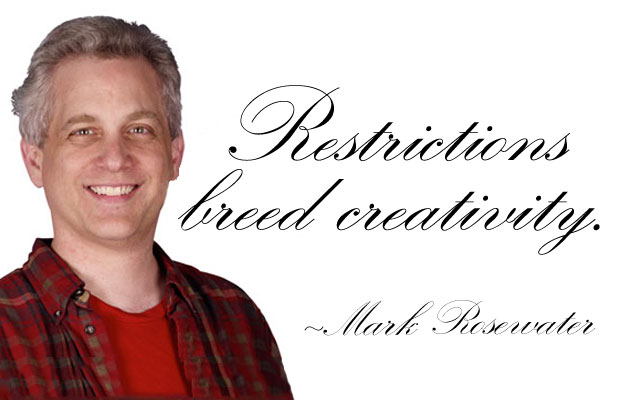 Commander is a restrictive format. Take another look at all the rules for deck construction and play: It's a lengthy list that's a daunting task to remember when you first learn about the format. But for those of us who have built hundreds or thousands of deck, and spent countless hours trawling Gatherer for cards we may have missed along the way, Commander can still feel vast.

The restrictions of Commander aren't always restrictive enough to slake the thirst of voracious deck builders.

Adding additional boundaries to stay within forces us to make different, difficult decisions for cards. These are some of the ways—and decks—that you shared that resulted from the extra effort.

The Short and the Long of It

One of the "easiest" ways to layer in a restriction is to place certain card types out of bounds, such as what Michael did:

The deck I have that uses a restriction is a number I call "Late Night Creature Feature." The restriction? If it's not a land, a creature, or a Planeswalker, you won't find it here—it can be something else too, but if it doesn't have one of those as a card type, it's banned from the deck.

Seeing Ruric Thar and convincing myself to build a deck around him, I decided to go all in and embrace the noncreature hate. (Planeswalkers get an exception because they're small in number anyway and, hey, Planeswalkers are cool, ok?) It does lead to some interesting challenges with a lack of certain options like the "traditional" Commander staples. One of the most enjoyable parts about the restriction is finding "loophole" cards that fit the requirement but still step outside the restriction or have effects that can fill in for the cards that aren't allowed. Things like Homura, Human Ascendant, who plays as a creature but turns into an enchantment, the various bestow creatures who can double as Auras as needed (which is one of the reasons I LOVE bestow), and creatures like Acidic Slime that can fill the role destroying my opponents' stuff.

Overall, I think it makes for a fun kicks-and-giggles deck that can be intimidating with an outpouring of creatures while managing to avoid being too reliably overwhelming to make it unfun to play against, since it comes with natural drawbacks. Win or lose, this is a deck I can be sure to have fun with nearly every time I play it.

Card types aren't the only limiter available. When I found myself enjoying playing green in my Commander decks too much I switched gears and made many decks without any green at all. Cutting out a color helped me try cards and strategies I would never have found with green in my decks.

Taking it to the extreme, you can cut out every color and create what Andrew cooked up:

As we all know, Commander decks all have a built-in requirement: color identity. I originally got into the format because I wanted to push this requirement into the most difficult area: colorless. Kozilek, Butcher of Truth was the first deck I ever built, a personal deck-building challenge to start a new format off with a bang.

While big, beefy creatures are no problem for a colorless Commander deck, there are three areas it needs to focus on: mana acceleration, card drawing, and removal.

Without any spells to ramp my mana I have to rely on mana rocks. Thankfully, there are a slew of powerful options, with Blinkmoth Urn being the nuclear reactor of a deck full of artifacts. I'm very excited about Astral Cornucopia because this deck can produce a lot of mana for it. Colorless also means no basic lands, and so many weird lands are run in this deck simply because they are colorless lands (like you, Griffin Canyon).

Card draw is fixed by the fantastic Mind's Eye, but I think Serum Tank is a very underrated card in artifact-heavy decks. With the ability to untap artifacts I can sometimes draw many cards a turn with it.

Finally, colorless has to rely on a lot of board wipes for its removal. All Is Dust and Oblivion Stone are the stars, although proliferate, untapping, and Energy Chamber help Lux Cannon fire away. Also included is the beloved Phyrexia's Core + Spine of Ish Sah combo.

There's more than color and card types to consider cutting. Have you ever considered building a Commander deck from nothing but commons? Taz has:

As far as Commander decks go, I much prefer having restrictions. There are a lot of cards available in Commander, and it's only sane to limit those to a manageable subset. (Quite frankly, I'm not sure how five-color Commander deck builders handle it!) Another one of my decks only uses cards printed in Modern sets, for example. This deck, however, is composed solely of cards that appear in a search for "common" cards on Gatherer. (So a few of these haven't seen paper print at common, but I consider that a minor technicality for my purposes.)

While playing this deck, the aim is generally to suit up Sir Shandlar with an array of Equipment and Auras and go to town; Dragon Fangs and Dragon Scales in particular have surprising synergy with him! While building the deck, however, I aimed to squeeze as much value as I could out of the cards available to ensure that this plan could be sustainable; this mostly involved more land-ramping and Enchantment-wiping cards than I could reasonably fit in the deck. To say the least, making this deck was an interesting experience.

There are several different flavors of "Pauper Commander" out there, and the one I'm most familiar with is using commons for every card. However you choose to dial down (or up!) the rarer cards in your deck, the insight from looking across new swaths of options is an enlightening experience.

But using a restriction to build decks doesn't have to mean being serious, as @GolgariGlenRoss from Twitter shared:

As far as building around a strange limitation, I think I have a pretty unique deck. I started making a pile of cards that I thought had funny names, like Goblins of the Flarg and Orgg. I said aloud, "I should make these into a deck," and a friend replied, "The commander should be Thraximundar." Seemed obvious once he'd said it. So I had to do it—a deck entirely of cards with silly-sounding names.

Of my eleven Commander decks, this one is by far the most fun to play. I announce every spell and ability out loud to emphasize the silliness of the words. Cards used in combination can trip up my pronunciation. The cards are very unusual so there's a lot of "What does that card do?" and "Can I read that?" at the table.

It doesn't have much deep synergy or strategy, but it has a few silver bullets that answer other decks in my local playgroups and some control and disruption effects. It even has some genuinely powerful cards. Thrax himself is pretty strong, and I find people are always counting my lands anticipating seven mana. Until then, it's Hyalopterous Lemure beatdown!

I took out Jokulhaups, even though it's on-theme, since I kept drawing it and not playing it since it just ruins games. This deck is intended to "play fair." It used to run Toy Boat. A few people have suggested Now I Know My ABC's.

It even wins occasionally; usually because someone got greedy and built a massive battle cruiser to Delirium or Phthisis.

I have a bit of a soft spot for "Sekki, Pronunciation's Guide" that Matt Cavotta used to sprinkle into his flavor-focused column (since I'm awful at pronunciations). An entire Commander deck built around the principle of difficult-to-say cards sounds exactly like the kind of wacky deck I'd enjoy playing, and it's certainly an idea I hadn't considered before.

A Commander idea I haven't been able to try building for myself is using a point system to determine the winner of a game. Instead of the strict and severe requirement of just "be the last player standing," a point system applies restrictions that incentivize achieving things throughout the game.

What I enjoy most about Commander is playing in a points-based league where games last a little while and the focus is on having fun, rather than winning by turn five or powering out a ridiculous infinite combo. My first Commander deck was Heavenly Inferno, since I've been collecting cards to modify my Red-White Angels & Dragons deck since I started playing in late 1994, and Kaalia is a perfect fit for that. The issues with Kaalia: she draws a lot of hate and opponents' first impression is that I'm going for kills right away. I decided to build a deck around Kaalia with the requirement that it has a lot of ways to generate points and a secondary requirement that Kaalia doesn't leave my command zone until I either have my back firmly against the wall or the game is about to end anyway.

We typically play in five-player pods, and as soon as the second player is eliminated the game is over. When the pod has more experienced Commander league players in it, the game can go on for quite a while. This lets me slowly build my mana base, deal with any particularly nasty threats, rack up some points—and once the end looks to be very much nigh—unleash Kaalia and get in some kills to finish the game.

1 Bloodgift Demon 1 Harvester of Souls 1 Ob Nixilis, the Fallen 1 Ashes to Ashes 1 Phthisis 1 Howl from Beyond