elcome back to Perilous Research, DailyMTG's exclusive Magic Online column. Magic 2014 hits the shelves tomorrow night. There's a lot of speculation about the Standard metagame and how it will look once Magic 2014 becomes legal. Let's take a moment to discuss the implications 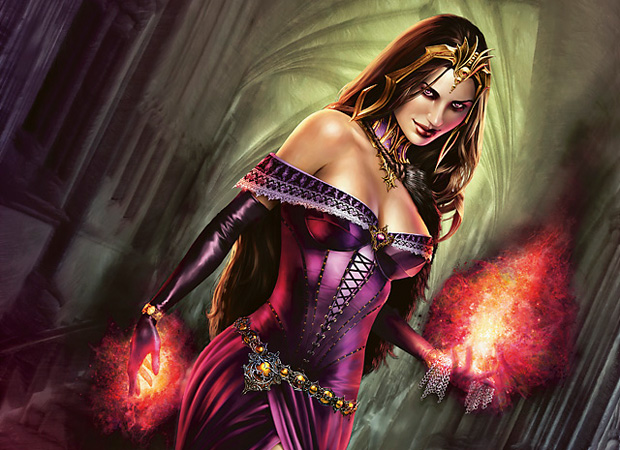 I expect Gladecover Scout and Fiendslayer Paladin to push a lot of players toward cards like Unflinching Courage and Rancor. As a result, cards like Rolling Temblor will probably see a significant increase in play. We can also expect Liliana of the Veil, Far & Away, and Devour Flesh to become more common.

Archangel of Thune is my favorite card in Magic 2014 . We have no way of knowing what kind of removal people will be playing, but I expect Doom Blade to be somewhat popular, at least out of sideboards. There are a number of ways to force the Angel through your opponent's removal, though. Cards like Sin Collector and Duress seem like the best options available. I have many fond memories of Baneslayer Angel and the new Magic 2014 mythic rare is eerily similar in the way that it dominates a game.

Kalonian Hydra is one of the more impressive cards. It can't claw you back into a game like Archangel of Thune, but it closes a game faster than just about anything. The card has amazing synergy with Exava, Rakdos Blood Witch and I wouldn't be surprised if we saw an aggressive/midrangey Jund strategy that took advantage of this excellent interaction. The card also combos nicely with most of the other Golgari and Rakdos creatures from Return to Ravnica and Dragon's Maze.

Today, I'd like to take a final look at pre- Magic 2014 Standard. I'm impressed with the current Standard's diversity from start to finish. Here we are, in the last week of the format, and there are still more than ten unique and competitive archetypes. Learning about these decks will help us lay a groundwork for our Magic 2014 creations. Let's jump right in and start checking out some decklists.

4 Bonfire of the Damned 3 Farseek

This is a reasonably exciting new deck. The deck takes elements from the aggressive Jund strategies and couples them with Huntmaster of the Fells and Thundermaw Hellkite. This puts the deck in an incredible position against most decks in the field. I really love the fact that the deck can Burning-Tree Emissary into Farseek. It's important to establish board presence quickly in the current Standard format and that seems like a great way to apply pressure, and put up defenses, all while ramping you into a juicy Bonfire or powerful four- or five-mana spell.

My version of Red-White-Blue is still going strong. Sammy T managed to go undefeated on Day 2 at Grand Prix Miami with this main deck. There's still some debate as to whether you should play a third Thundermaw Hellkite or a third Sphinx's Revelation. I currently have the third Thundermaw and I've been very happy with it.

White-Black-Red Midrange strategies are well positioned in the current format. There are very few control decks these days and the deck murders aggressive strategies. I played this deck for a bit and found myself often flooded or unable to draw a fifth land when it was necessary. Faithless Looting does a lot of work solving that problem and I expect these lists to play one to three copies consistently going forward.

Decks like this have seen a bit of resurgence over the last few weeks. The deck is very powerful, but it found itself being outraced by the Blitz decks that were popular last month. This deck has become a contender again now that Naya Burning-Tree Emissary decks have mostly been scrapped in favor of lists with Voice of Resurgence.

4 Geist of Saint Traft 4 Voice of Resurgence 2 Ajani, Caller of the Pride
75 Cards

We can expect this deck to get even bigger once Magic 2014 becomes legal and the new legend rule takes effect. Gladecover Scout gives the deck an incredible one-mana creature to dump its enchantments onto and an enchanted Fiendslayer Paladin is an impossible-to-race Geist of Saint Traft against the red-based aggressive decks. Make sure you bring a lot of hate for this deck if you don't plan on playing it yourself. Ray of Revelation is a very good card; don't leave yours at home.

Angel of Glory's Rise made a comeback in the last month as players started taking graveyard hate out of their decks. The newest versions of the deck don't bother using Undercity Informer to "go infinite" and win the game that turn. There aren't enough Esper decks in the field that can actually grind you out once you combo anymore. Having the loop with a Huntmaster of the Fells or even double Fiend Hunter is almost always going to be good enough. Try leaving an Angel exiled with Fiend Hunter to protect yourself from a big Bonfire of the Damned in the appropriate matchups and comboing will almost always result in victory.

3 Bonfire of the Damned 1 Flames of the Firebrand

3 Huntmaster of the Fells 2 Restoration Angel

Midrange Naya decks went from being a dominant force to practically being nonexistent over the last two weeks. This deck has a lot going for it, but the new wave of Red-White-Blue Flash decks and Jund's resurgence have pushed it out of the limelight for the time being.

2 Feeling of Dread 2 Ray of Revelation