This past weekend in Philadelphia gave us our community its first look at Zendikar in Standard action. Here is how the Top 8, and (in this case more interestingly) the Top 16, went down:

The Top 8 was quite clearly dominated by Jund Aggro decks (those crafty Savage Lands even crammed one more in the Top 16). These decks look a lot like the aggressive, hybridized, Jund Cascade decks that we have seen since the release of Alara Reborn ... just with different mana bases. To wit, the Jund decks always played basic lands in response to Path to Exile, but now with Verdant Catacombs they have a reason to play more basics, all of which mesh together quite nicely with Dragonskull Summit and Rootbound Crag. 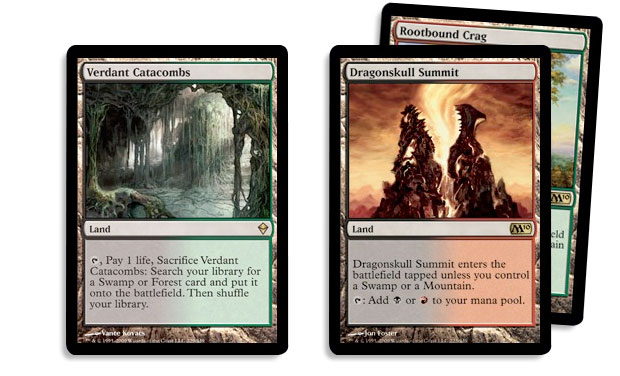 The Jund Aggro decks had some variation, with playable (if not universally played) potential game enders like Garruk Wildspeaker or Resounding Thunder in some versions but not others. For the most part they topped up on Broodmate Dragon and bottomed out on Sprouting Thrinax and Putrid Leech, Terminate and Lightning Bolt. These decks all played a moderate cascade theme, plus big Broodmate Dragon, the Dragon that always "cascades" into an Air Elemental! 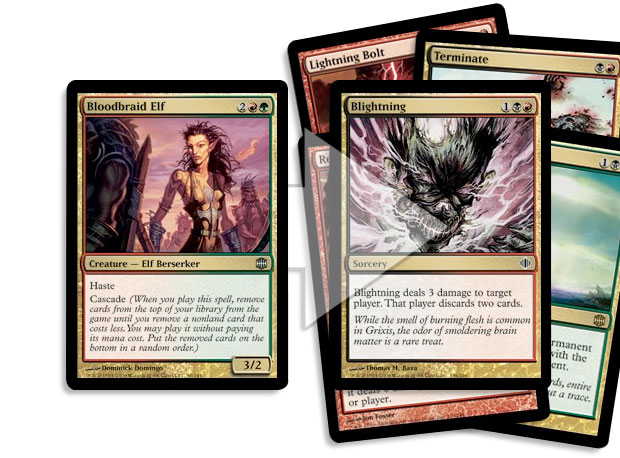 On the other end, a Bloodbraid Elf out of these decks could spit out a variety of cards, ideally Blightning, but possibly any number of removal cards (Lightning Bolt, Terminate, Maelstrom Pulse, Resounding Thunder), or possibly a good-to-great creature.

The consensus number of lands for these non-ramp Jund Aggro decks seems to be 25; of the Top 8 competitors, only Jake Klomparens played a "mere" 24, but Jake was one of the Jund players who ran Garruk Wildspeaker, a potential mana booster (provided Jake hit four lands). Even without a fifth land drop, his deck could go Garruk Wildspeaker into Broodmate Dragon.

The Jund Aggro decks were a bit light on the Zendikar additions, but one that really stood out was Goblin Ruinblaster. Goblin Ruinblaster seems like a solid weapon in a Jund mirror, for instance. So much depends upon hitting the right amount of mana to play your own big spells; the Goblin Ruinblaster can snipe a Savage Lands or play the Boggart Ram-Gang role, coming off the Bloodbraid Elf for less short-term damage, but more destructive disruption.

Christian Calcano hung up his usual Island / counterspell combination to go with a weenie red (and white!) Deck combination for the first outing with Zendikar. This deck played basically one million new Zendikar cards, woven together with existing cards to form an exciting and fast-paced offensive weapon. 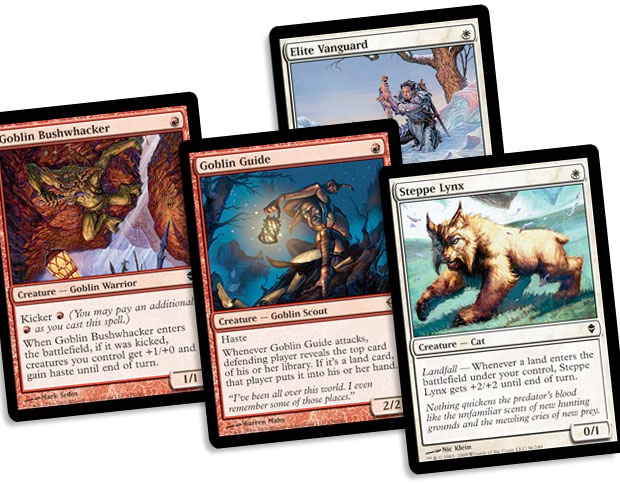 Here are fourteen cards that really love a Ranger of Eos.

Elite Vanguard is simply the Savannah Lions of the day, and needs no explanation. Goblin Bushwhacker is an interesting two-of that can attack as a 2/1 the turn it comes into play, and also has potential synergy with Zendikar neighbor Kor Skyfisher. Goblin Guide was a card that I initially dismissed, but in the context of a fast deck with both good creatures and good burn spells (headlined by Lightning Bolt), it can help chop down the 20-life tree rooted across the table ... sometimes starting turn one!

You may have noticed that Calcano played twelve Zendikar fetch lands and only seven basics. While this may seem like a dangerous gambit (because he could potentially "run out" of lands), remember that these lands still have utility when combined with Steppe Lynx and Plated Geopede.

Vampires, and a Preview

The Vampires tribe came out in force in Philadelphia, putting Ted Renner into the Top 8 and positioning another two players in the Top 16.

As we talked about last week, Vampires is a nice intersection of good creatures and good spells. It can blow up the opponent's hand with Mind Sludge or profit from the death of opposing creatures with Tendrils of Corruption. Bloodghast helps to make Vampires relentless ... but so does Vampire Nighthawk.

Vampire Nighthawk may be my favorite member of the tribe. It is such a good example of how far creatures have come. Vampire Nighthawk is essentially the same mana cost as a Hurloon Minotaur (Magic's iconic red creature)... but with two very relevant abilities (rather than nothing) tacked on. Vampire Nighthawk can elongate a game, especially against beatdown decks.

One card that has been generating some buzz (and provided the decorated Ken Adams with a Legacy Top 8 on Philadelphia's second day) is Vampire Hexmage. Check out the Adams deck (Legacy-, not Standard-legal):

Not that it has anything to do with Standard play, but Vampire Hexmage and Dark Depths make for a two-card combo to a 20/20. Stay tuned here on magicthegathering.com to see if this kind of a strategy makes a splash this weekend in Extended at Pro Tour–Austin!

There are a couple of decks from the Top 16 that I think are worth looking at ... maybe more interesting to talk about than the Jund decks that actually made the break past the Swiss. All of them include basic Plains, but they take radically different directions, from do-nothing control, to focusing on powerful permanents to dominate the board and the game, to lightning-quick mana acceleration. First the do-nothing control:

I love these kinds of white-based control decks!

Don't try to beat this deck with creatures! As long as Lapine isn't missing a lot of land drops, a creature-based offense is going to be problematic. The deck has Oblivion Ring, Path to Exile, Pitfall Trap, Day of Judgment, and Martial Coup. It can destroy roughly one million ba-zillion creatures, plus exile another nine or so from the game.

Scepter of Dominance is a very functional two-of in this deck. It can slow down a the many decks whose lands come into play tapped, putting the opponent waiting for a strategic "big turn" yet another turn. More importantly, Scepter of Dominance can contain a single creature, forcing the opponent to commit multiple creatures ... right into the waiting grip of Day of Judgment or Martial Coup.

Emeria, the Sky Ruin is one of my favorite new cards from Zendikar. It is basically a Debtors' Knell, but one that can't be easily stopped by blue permission spells. While it can be useful in essentially any long-game situation, consider this one: The game goes forever; the white deck over-draws to eight and discards Iona, Shield of Emeria.

How are you going to contain that gal, exactly? With Emeria, the Sky Ruin in play?

Any prospective do-nothing players out there should heavily consider playing Esper Charm, just so they don't get blown out by just the Luminarch Ascension ... because it will happen!

Calosso Fuentes played a deck that can also win on a Luminarch Ascension blowout, that also has a ton of Day of Judgment and Martial Coup to kill creatures, but at the core of his deck is a block of twelve planeswalkers. 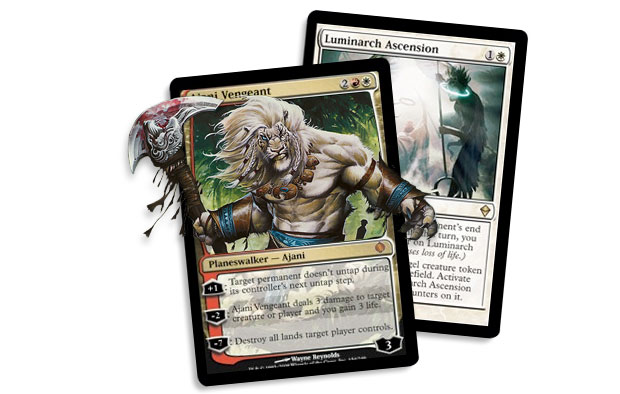 Between them all, it is difficult to concentrate an attack against any one planeswalker over just a turn or two. Note that the planeswalkers (among other key functions) draw fire away from a player, and as such, can help set up the Luminarch Ascension offense.

The Philadelphia Top 16 was rounded out by a pair of Lotus Cobra Naya decks. 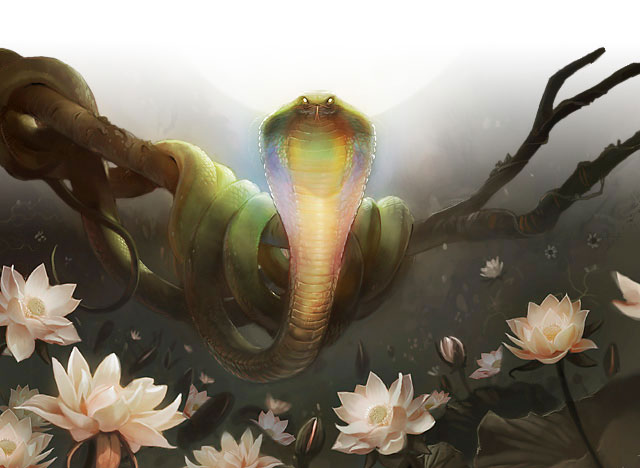 Superficially these are "just" Naya-centered active decks, but the presence of Lotus Cobra can have a significant impact on the deck's ability to act. For example, a second-turn Lotus Cobra can easily produce a turn-three Bloodbraid Elf.

Consider this: play a Plains, make a 4/4 with Rampaging Baloths; sacrifice the Plains for an Arid Mesa, 4/4; sacrifice the Arid Mesa for another Plains... another 4/4. At the same time, your Knight of the Reliquary would have left being a 4/4 itself in the dust of 5/5 and beyond.

So despite some early format dominance from the Jund Aggro wing, there seem to be lots of options in this Standard. You can play Mono-Black as a versatile attack deck, any number of Luminarch Ascension decks, or of course one of the multicolored green decks with Savage Lands or Jungle Shrines ... and still not scratch the surface of what this card pool is capable of producing. For instance, there was not one Cruel Ultimatum mentioned in this article!

Now, as for non-Standard Constructed excitement, starting tomorrow is this year's Extended Pro Tour. I, for one, am very excited to see what kinds of decks appear. Will we encounter fast Cascade combo decks using three-mana cascade cards like Ardent Plea to search out Restore Balance (as a game wrecker) or Hypergenesis (as a game winner)? How about Dark Depths? Is that too gimmicky, or exactly the kind of deck that can come out of nowhere to win a Pro Tour? Me? I am looking forward to reading about four Lightning Bolts and four Lightning Helixes, linking up arm in electrical arm for the first time in Professional Constructed Magic.

Check back here on Friday. It's going to be absolutely shocking!