The now-cliché advice given to Peter Parker—better known as Marvel's Spider-Man—is useful even beyond the world of comic books, including in Commander. Commander includes so many powerful cards that it's impossible to avoid running into broken things, at least unless you specifically avoid it. It's this choice that defines the format: Choosing the less-broken path creates more interesting games and forges friendships.

At least that's how I consider it. 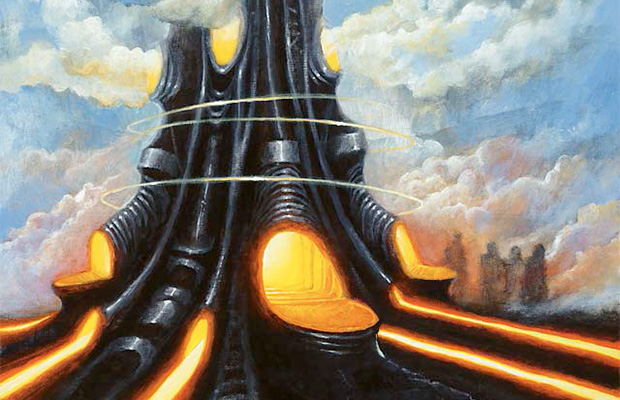 Less-broken" is a fuzzy target. It's easy to see that in arguments around cards there could be no consensus about how busted something is. Context is important, as what's harmless or hilarious in one game can be frustrating or oppressive in another.

Cards like Anvil of Bogardan and Mimic Vat are clever ways to set up plays or interact on interesting angles. (I'm a fan of defensively "locking away" under Mimic Vat someone's annoying creature I don't intend to make copies of.) They can also be disruptive in combination with other cards. Unlike game breakers that stand alone—Jin-Gitaxias, Core Augur, and friends, I'm looking at you—some cards get a bad reputation simply by being abused instead of used.

Arcum Dagsson is my go-to example for this type of misappropriated card.

Artifact decks are awesome. With enough mana, it's possible to deal with everything in a game strictly through colorless cards. Blue's affinity for cogwork and answers means it's often the color of choice for artifact decks, although Esper—white-blue-black, featuring Sydri, Galvanic Genius and others—is an acceptable alternative.

Arcum Dagssoncould be just a useful way to react to opponents, ensuring that an otherwise-useless artifact can instead become something helpful in any situation. Fetching out Oblivion Stone, Nevinyrral's Disk, or Spine of Ish Sah defensively is great as an infrequent trick. However, the blue commander from Coldsnap is more often a combo engine that rapidly sets up Darksteel Forge and an array of powerful beatsticks and lockdown artifacts.

The temptation to go all-in with the power of Arcum Dagsson makes it difficult to convince players when you aren't planning to combo them out. Even if you build up a reputation among your core group of Commander players, trying to convince someone you're randomly playing at an event elsewhere is an exercise in futility. It's why I've never felt like picking up a copy of the legendary creature, even though he's an obvious inclusion for artifact-heavy decks.

But what if there was another choice? Can the power of dumping artifacts onto the battlefield be matched up with a commander who doesn't immediately threaten everyone else in the game?

Call it a conspiracy of sorts if you will, but that's exactly what Muzzio, Visionary Architect does. 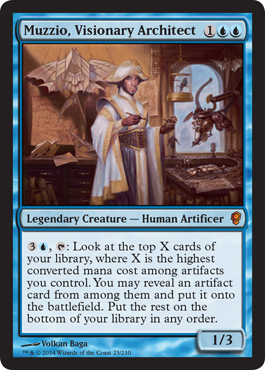 Step aside Arcum Dagsson. You've been made obsolete.

Tik Tok (on the Clock)

Let's be clear: Arcum Dagsson is more powerful since he's a pure tutor—he will find whatever artifact you want and put it into play for free. Heck, there isn't even a mana cost to pay to do it. Just tap, sacrifice, and search.

Muzzio, Visionary Architect is something a little different. He's not a combo, but a value, engine. With the right deck construction, it's easy to see that Muzzio will find something you can put into play almost every time you activate him. What it is will probably be random (scry and other deck-setting effects aside) and may not be exactly what you want in any situation. Compared to an effect like Treasure Trove, paying four mana to "draw" an artifact of your choice directly onto the battlefield is a great deal. 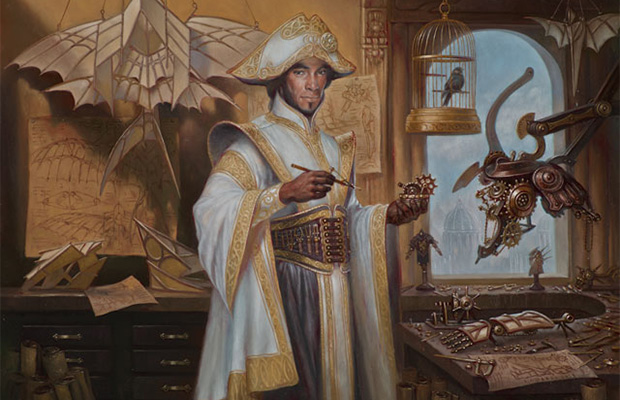 And unlike Arcum, Muzzio shouldn't inspire instant fear in your opponents. The setup takes longer, and the payoff is less certain, but when it works it's a story everyone will remember. That's the kind of adventures I like to create in Commander.

So what are some of the artifacts we like to put into play unexpectedly? How about the blue commander we already love? You sent in plenty to work with, like this tricky take on Talrand, Sky Summoner by Eric:

Regarding Blue commanders and artifacts:

I go full Johnny when I play Commander (the format is a Johnny's dream, IMO), and the list I'm gonna share with you is no exception. I play a Talrand, Sky Summoner deck that, other than the commander, runs zero creatures.

It's a deck that I've worked a long time to hit that balance between "competitive" and "not losing friends." I eschew a lot of things with this deck (running more counterspells, Capsize, infinite mana), but there's one card that makes for an absolutely busted result when utilized with this list: Proteus Staff.

Since I run no other creatures, I can "tuck" Talrand (or a Drake token that I made), reveal my whole library, put Talrand back onto the battlefield, and then, since the Staff allows me to put the revealed cards back in any order, stack my library in any way I choose.

If done right, I can always have the exact card I need, right on top of the deck, with several cantrips in hand to get it for me.

There's also Runechanter's Pike, which does a lot of work with the built-in evasion of the Drakes (or commander damage, after a Cyclonic Rift), and in a deck with fifty instants and sorceries, is never wanting for a larger power boost.

If having the chance to stack your deck isn't your cup of tea, maybe scrying into the power of the sea, courtesy of Justin, is:

It's more my favorite deck than my favorite commander, but I play a Thada Adel deck that recently changed to a Thassa deck. The deck is a Sea Monsters deck that is built to kill people with gigantic (and often terrible) sea creatures. I hope Thassa will be less threatening than Thada Adel, whose only goal was to steal people's mana-ramp. My favorite artifact in this deck is easily Quicksilver Amulet, as it lets me cheat my giant monsters into play. Journeyer's Kite is fun, too, but Quicksilver Amulet lets the deck play on a whole other level. The deck is actually fairly powerful but is certainly not broken. Mono-Blue at its most fair, perhaps?

High risk, high reward is an exciting way to approach playing Magic. One legendary creature that embodies this is Dralnu, Lich Lord, something Jan embraced:

For me, there're multiple blue cards I like as commanders: Keranos, God of Storms; Melek, Izzet Paragon; Talrand, Sky Summoner; Ephara, God of the Polis.

But the most unique commander for me is the only one that gives me the feeling of playing sixty-card Magic on a competitive level (even if in Commander it's much harder to assemble):

Being able to flashback all of my best spells in a deck that contains nearly 50% instants and sorceries makes me happy, because it stretches the game a lot.

The most important artifact here seems to be Catalyst Stone, since it's a one-sided virtual mana accelerator in comparison to Arcane Melee, which also affects my opponents.

From there, Sphinx-Bone Wand and Thousand-Year Elixir are the next important ones. The Wand works as a continuous damage dealer to clear the board until the turn I combo off with Mind Over Matter + Nykthos, Shrine to Nyx, generating huge amounts of mana. Mind Over Matter untaps my Dralnu again and again, to flashback cards and get card advantage through River Kelpie and Secrets of the Dead. Finisher here is Exsanguinate, if Wand is not on table.

The Elixir is much better than Lightning Greaves here, since I don't run a huge amount of creatures, but all of them want haste due to their abilities, and the Elixir also lets me untap Dralnu once per turn.

If that's a bit too risky for you to try, Oren's look at just drawing a bunch of cards is a safer bet to take:

I'm sure most people think "blue commander" and "artifacts" means that either Memnarch or Arcum Dagsson are the only choices of commander for a mono-blue deck that revolves around the silver and brown. My Arcanis the Omnipotent, Master of Machines deck has a thing or two to say about that.

1 Intruder Alarm 1 March of the Machines

The whole deck is one big pile of artifact-based synergy, but there are a few artifacts that work particularly well with Arcanis, hence the choice of him as commander.

Mycosynth Lattice—Turning Arcanis himself into an artifact can lead to some serious shenanigans, mostly involving Filigree Sages, Voltaic Key, Clock of Omens, and Unwinding Clock.

Psychosis Crawler—Lets Arcanis bolt each opponent every time I tap him.

Rings of Brighthearth—When these aren't generating infinite colorless mana with Basalt Monolith, they're often serving as a second copy of the Bracers.

It would take far too long to delve into all the tricky combos and ways to go infinite that this deck has to offer, but the synergies with Arcanis alone are enough to make others fear this deck piloted by "original Jace."

If this menagerie of powerful things in blue and colorless doesn't do it for you, maybe membership with the Gruul Clans is something you should look into. Just sayin'.

My First Kiss (Went a Little Something Like This)

What is or isn't "broken" is going to be up to your play group or local store, but what I can promise is that there is some value in taking the road that meanders into the countryside before getting to business defeating the enemy.

After seeing and playing in several Commander games at last weekend's Pro Tour Journey into Nyx there's one aspect of deck building I realized I've been ignoring too much: Being proactive about opponents. While playing with all ten Temples from Theros block is a blast—scry is awesome to avoid shuffling an oversized deck!—it is bothersome to finally find my five colors of mana only to discover it's too late to do anything meaningful.

So that's my question for you: Aside from ramping up mana, what are the first few things you try to do in your games of Commander?

As much as I hope one of today's machines of colorless and blue tickle your fancy, I'm excited to see how the rest of the world approaches the early turns of a Commander game.

Join us next week when we get off to a great start. See you then!