ello and welcome to another edition of Perilous Research. Today, we're going to be examining the final days of Magic 2013 Standard, and then we're going to look at the state of Modern in anticipation of Pro Tour Return to Ravnica. White-Blue Delver has dominated Standard since the release of Magic 2013 on Magic Online. In fact, over the course of this Standard season, White-Blue Delver has posted more than doubled the amount of 4–0 finishes in daily events than any other archetype. It's no secret that White-Blue Delver was the king of the jungle. The tempo menace was expected to post consistent strong results, but something very interesting happened this past week. White-Blue Delver performed terribly. It's not that people weren't playing it; the deck was the most-played archetype by a landslide. It turns out that people figured out how to beat Delver. The jig is up, all the secrets are out of the bag, and the format is now attacking from too many angles for a simple Geist of Saint Traft/Blade Splicer swap to be enough anymore.

Here's a list of the decks that went undefeated in last Saturday's Daily Events by archetype: 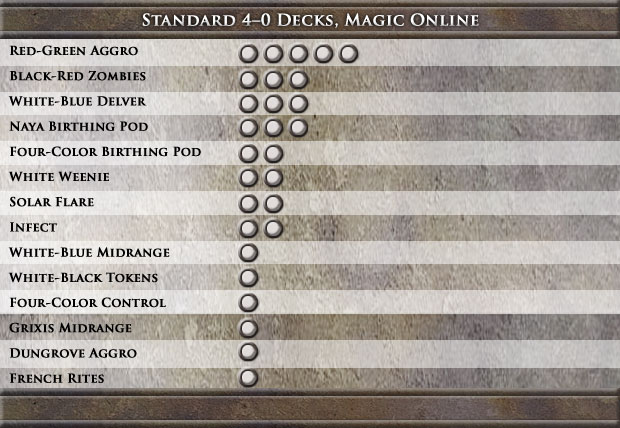 I called a doctor just to be sure, and I've confirmed that Standard is looking healthier than it has in quite a while. Red-Green Aggro was the big winner this week, but not by any kind of absurd margin. Naya Pod was similarly strong, with three pure versions going undefeated and another two 4–0s from a player who decided to splash blue. White-Blue Delver didn't fall off the face of the Earth, but three 4–0 finishes seems significantly more manageable than twelve. Let's take a look at some of Standard's new decks to beat!

4 Huntmaster of the Fells 1 Thrun, the Last Troll 2 Hellrider

3 Cavern of Souls 4 Copperline Gorge 4 Huntmaster of the Fells 1 Thrun, the Last Troll 4 Bonfire of the Damned 3 Green Sun's Zenith 3 Sword of Feast and Famine 2 Sword of War and Peace
75 Cards

Red-Green Aggro posted the best results of any archetype this past week. xMiMx had a strong handle on what the format was going to look like after a few match wins and built this version accordingly. Sword of Feast and Famine is an absolute powerhouse when Vapor Snag isn't a huge part of the metagame. Four Bonfire of the Damneds is precisely the correct number. We've examined many creature decks in the past that only play two or three copies of the Avacyn Restored mythic rare, and I've always expressed some disappointment. Bonfire of the Damned is the most powerful thing a creature-based deck can be doing. Usually, you get a Plague Wind that also shortens your clock by a full turn when you trigger miracle. Oftentimes, Bonfire of the Damned simply wins you the game on the spot. Infect is sure to make some waves in an environment without Delver, but xMiMx has a single copy of Melira, Sylvok Outcast in the sideboard that can be tutored up via Green Sun's Zenith.

If you played Standard a few months ago, you're familiar with the Strangleroot Geist chains that ruined any control deck's chances of winning. This deck seems like an excellent choice for tomorrow's Friday Night Magic or for any Standard Magic Online events you plan to play in the coming week. Creatures and Bonfires seem like the best combo in the current metagame.

Black-Red Zombies and Blue-Black Pod versions of Zombies have been vying for the title of Best Zombie Deck for quite some time. In the twilight of this Standard format, Black-Red Zombies seems to have pulled into the lead by a wide margin. The deck is tremendously well positioned against any sort of green aggressive strategy like Naya Pod or Red-Green Aggro. Gut Shot gives this deck a huge edge against strategies that rely on Birds of Paradise and Llanowar Elves. Skirsdag High Priest is a beating against any deck that wants to trade (i.e., the mirror or anything with Strangleroot Geist) and the extra copies in the sideboard help augment this plan of attack. Falkenrath Aristocrat is probably the biggest threat this deck has in the current setup of the format. Restoration Angel is seeing less play and it's extremely difficult for green decks to deal with a 4/1 flying, hasted creature, especially when it can become indestructible at a moment's notice.

The deck is also well prepared for Delver when the matchup happens to rear its ugly head. In fact, this archetype is probably the major reason we're seeing Delver fall off in such large numbers. The deck is already well established, so you might expect to see some hate in the form of Sword of Feast and Famine. Luckily, you have a lot of removal and you can make it very difficult for your opponent to have a good opportunity to equip and swing. However, if your opponent starts attacking with Sword of Feast and Famine, you're likely on a trip down Pudding River without a spoon. I'd recommend this deck to anyone who expects to see a lot of Delver and still wants to have a strong game against the new kid on the block, Red-Green Aggro.

Dust_ had a spectacular Saturday on Magic Online. It's rare that the exact same seventy-five manages to go undefeated in different events, but it's even more impressive when it's the same player in the same day. The deck is similar to Naya Pod, but Dust_ chose to splash blue for Phantasmal Image and Deceiver Exarch. I would've probably said the deck suffers consistency issues, but that seems silly when you take into account the finishes Dust_ pulled off.

This list does an excellent job making it to the midgame and late game, where the deck becomes nigh unbeatable for most strategies. Elesh Norn, Grand Cenobite and multiple Titans make a top end that can't be matched by the majority of the format. Zealous Conscripts lets the deck kill its opponent completely out of nowhere. Restoration Angel is well positioned against all the red-green decks. The deck seems like it has a lot going for it.

If you happen to find yourself playing against this monstrosity, I strongly recommend getting as aggressive as you possibly can. The deck doesn't have a lot of early-game action, so a well-placed Gut Shot complimented by some fast aggression should be enough to steal the game. However, if you're looking for a new deck to take to battle for the last hurrah of the Standard season, I strongly recommend putting this together and battling with it. I had the chance to play a two-man queue on Magic Online with this beast, and neither game felt close.

Standard is wide open! Play the deck you feel most comfortable with to give yourself the best chance of winning.

Modern has been extremely diverse for the past few months, but just as Standard is diversifying itself, Modern is becoming homogenized. This past weekend's Daily Events were completely dominated by Jund, and the only other deck that managed to go undefeated at all was RUG Delver. Let's take a look at the numbers:

Bloodbraid Elf, you cruel mistress. Jund was a force to be reckoned with throughout its time in Standard, and its popularity in Modern has been steadily increasing for the last few months. The deck has some of the best threats ever printed; some of the best, most versatile removal ever printed; and a brutal disruption suite to boot. It's hard to put together a deck that doesn't get hosed by one of Jund's angles. Players looking to compete with Jund are going to need to look for specific cards that are well positioned against it, like Paladin en-Vec or Mirran Crusader. However, Mirran Crusader can still eat a Lightning Bolt and Paladin en-Vec still loses to Tarmogoyf in a contest of pugilism. It seems the best way to attack Jund is to go after the mana base. Some Jund players are including Fulminator Mage as a mirror breaker, but Kitchen Finks is so strong in the mirror and everywhere else that it seems a little odd to replace it with something narrow.

Bisop017's list is pretty stock, but that seems to be the best route with a deck that simply intends to play more powerful spells than its opponent. If you're having nightmares about this deck then I recommend trying Ranger of Eos and Figure of Destiny. With a bit of practice you'll find it almost impossible to lose to a Jund player if you ever get to resolve a Ranger of Eos. That being said, if you can't beat em', join em'.

1 Electrolyze 2 Huntmaster of the Fells

RUG Delver is probably the best deck in Legacy, but its Modern counterpart is significantly more controlling. This version of the deck has multiple copies of Blood Moon in the main. We saw Blood Moon make some waves in this archetype last week out of the sideboard and I wondered if that would become the norm. Well, it looks like Blood Moon has found its way out of the sideboard and into the main deck in an effort to punish the high number of Jund decks that currently populate the Magic Online Modern metagame. 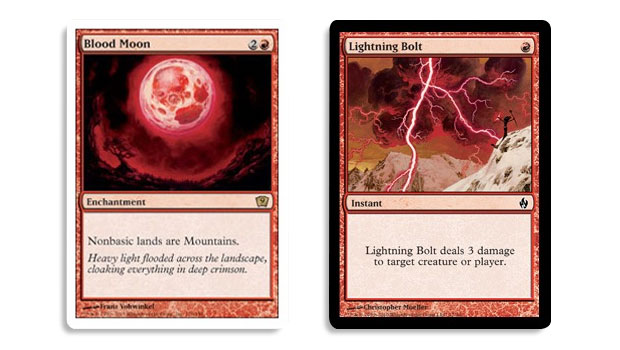 This is an aggro-control deck. RUG Delver players want to establish board position and hold it, as opposed to snowballing it further. This makes the deck much stronger against answers (removal/counters) but much weaker against questions (creatures/artifacts/enchantments). I recommend putting as much on the table as fast as possible when facing off against this archetype and taking opportunities to use your removal if your RUG Delver opponent ever taps all of his or her lands.

Jund is starting to take over. You'll need a lot of cheap spot removal for Dark Confidant, but you'll also need threats that are difficult for the Jund deck to handle.

That's all the metagame analysis we have for this week, but be sure to tune in next week for a look at Magic Online's Legacy and Pauper formats. The Return to Ravnica Prerelease is this coming weekend. Be sure to check out Limited Information to get a head start on your Prerelease opponents and don't forget to preregister for an event at your local gaming spot!