Glistener Elf—quiet right now amidst the hubbub of Karn Liberated and the wow factor of Phyrexian mana—is going to be an important tournament staple. 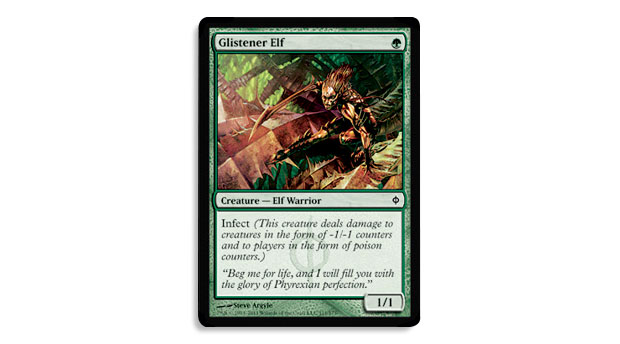 Glistener Elf—an Elf that doesn't even tap for mana—is going to be a deadly little package wrapped in the most attractive package a threat possibly can be: that of a one-mana cost. 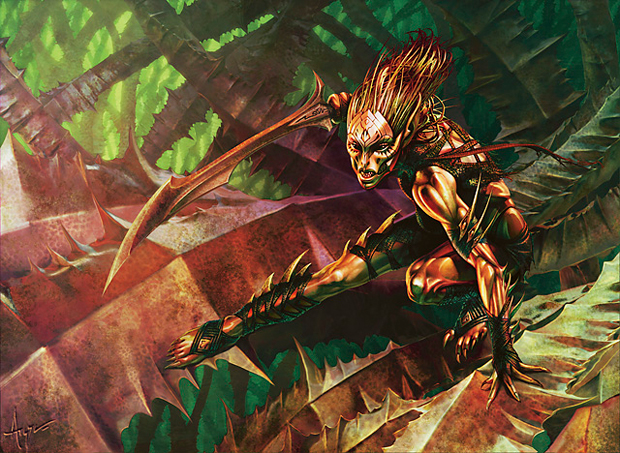 What's so great about a one-mana spell?

The last time a super-aggressive deck blew away any and all competition... wasn't that long ago. Remember this?


A big part of what made this deck so good was how cheap its threats were. Rietzl (and that other guy, someone Budde) had more than twelve aggressive one-mana spells that they could use to get the jump on their opponents, especially on the play. One-mana aggressive attackers were so good that the Amsterdam White Weenie deck eschewed Windbrisk Heights, the BFF (technical term) of triple-threat Spectral Procession. 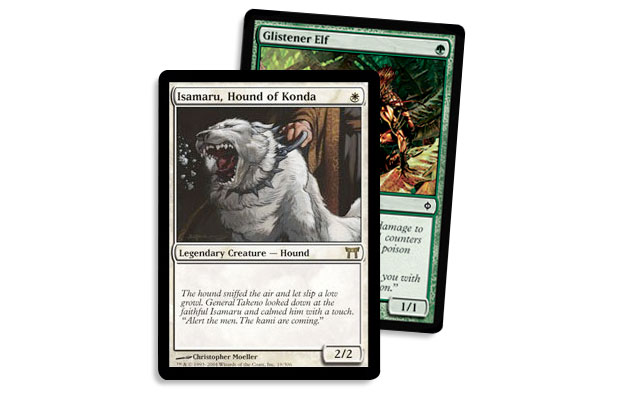 A few years ago I remember hanging out with Mike Turian at a Pro Tour, just after Mike was promoted to Magic R&D full-time. Mike is of course a Magic Pro Tour Hall of Famer and considered to be one of the greatest beatdown players in the history of the game (in particular, Mike was a master of attacking into a superior creature with a crappy 1/2 or something... and never getting "called" on it).

"The big problem with these decks," he mused, "is that they only have three copies of Isamaru, Hound of Konda. Someday, players will realize they should play four of those."

Glistener Elf is like the infect mechanic's Isamaru, Hound of Konda.

It might look like a 1/1, but infect is basically twice as vicious as regular damage when you consider killing people (ten poison counters versus 20 damage)... except even better.

I have been fooling around with "splashing" Inkmoth Nexus in Sword decks recently, especially with new good buddy Contagion Clasp. Often the right play is to run out a first-turn Inkmoth Nexus and swing with it on the second turn, even when you can make a more battlefield-developing move like an Everflowing Chalice or one of the format's wonderful offensive two-drops (Stoneforge Mystic or Squadron Hawk especially). 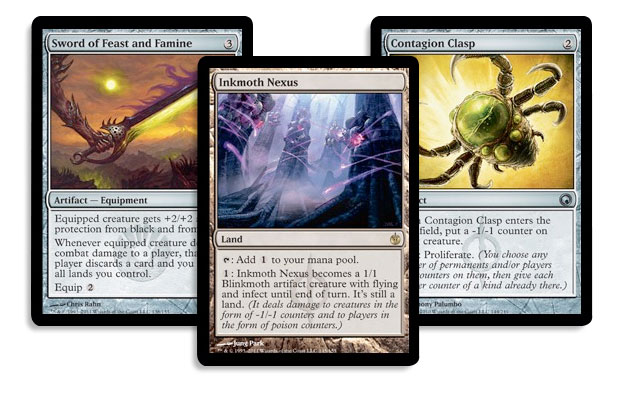 There is nothing quite like outclassing an active Jace, the Mind Sculptor with a Contagion Clasp catalyzed by a second-turn swing from a land (especially when you are playing no other infect cards). Getting in for 2 damage on the second turn with a creature like Savannah Lions, Elite Vanguard, or Isamaru, Hound of Konda is usually about the best thing an aggressive deck that plays one (or more) of those creatures can do... and Glistener Elf is the infect equivalent. But unlike hitting in for regular damage, getting that hit in with an infect creature is so much more lethal because you don't actually ever have to hit your opponent ever again thanks to proliferate.

Have you seen this deck?


I played against this deck a couple of times on Magic Online last week, and I must confess I still don't understand what Shriekhorn is good for. Granted I was playing a deck with Ulamog, the Infinite Gyre at the time, but...

The baseline plan is to attack with Inkmoth Nexus... and pile on one hundred Giant Growths, smashing the opponent with a massive amount of poison. You don't have to kill-kill the opponent immediately, as Contagion Clasp can serve as the finisher. I think that at least sometimes Glistener Elf might fit into this deck.

Maybe even only out of the sideboard?

I can totally imagine a spot where some opponents have no defense against the one-drop, and end up getting mugged on one. 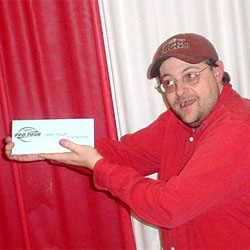 Longtime readers have probably bookmarked an old favorite by YT entitled The Ten Greatest Battles of All Time. Among the most memorable was a seemingly small Regionals move made by Jon Becker with his own strategic one drop.

[T]he matchup was the worst possible for Junk, with Becker somehow able to split the first two games. The opponent had sided in Scorching Lava, usually there for Nether Spirit, but equally effective against Ramosian Sergeant and that annoying snake, River Boa.

I remember glancing over Jon's shoulder and wondering why when he passed his first turn, there was still a Sergeant in his hand... It was only after his second turn, when the opponent untapped, and gleefully sent a main-phase Scorching Lava at the "helpless" 1/1, did Becker's plan become obvious. He responded with Wax // Wane, and had just gone a long way in winning a difficult matchup.

Much like Kai Budde figures out how to beat even the toughest matchups (admittedly by drawing his last Donate off the top of his deck, at times), Becker had figured out he would never win if that Sergeant traveled the bin. Just as his opponent overvalued a draw with a sideboard card in the hand, Becker went with the best plan to pull out the game...

Little plays by our friends, especially where they diverge from what we would choose ourselves, are often the things that teach us to play better. With this match, there was nothing on the line. Becker's opponent was eliminated from contention, and my friend himself didn't quite make it through the next five rounds without a loss. Nevertheless, it was an opportunity for excellent play, and for that reason had a lasting impact for me.

The Nexus deck already shows us the potential viability of a ton of Giant Growths and infect, linking up arm-in-arm with the common cause of competitor carnage. Pretty straightforward, right?

One of the cool things about Glistener Elf, and Glistener Elf with Giant Growths, is the versatility that both halves of the equation can potentially represent.

I mean casting a first-turn Glistener Elf with the outlook of getting in just a one-poison scratch (or a bit of a gash when properly powered) is cool... but the one-mana-ness of the threat allows you to play off curve, with a mana open to defend it, just like Becker's Ramosian Sergeant with Wax // Wane.

3. Except When You Don't

And you know what's the only thing cooler than making a tricky play, like intentionally running your one mana Elf off-curve, holding back one of a million one-mana Giant Growths defensively? 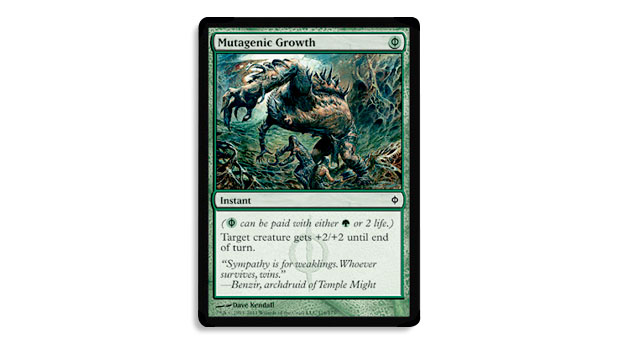 I mean, how insane is Mutagenic Growth in your opening hand? You can actually play for the advantage of a first-turn Glistener Elf... but with the potential defensive backup of the just-discussed off-curve Glistener Elf. 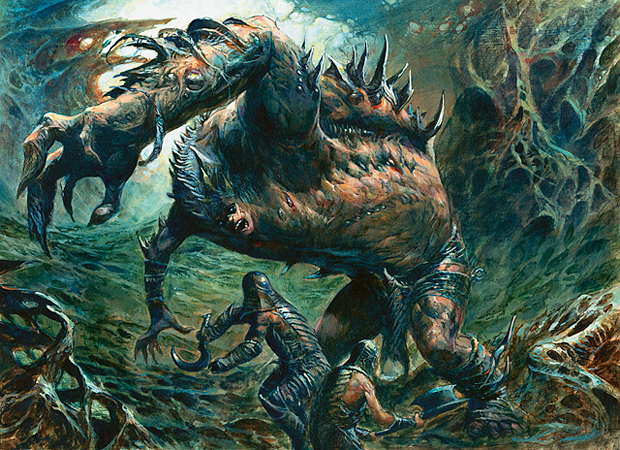 And let's be honest... Mutagenic Growth is quite a bit better than the already-being-played Mirran Mettle.

4. Speaking of Which... Not That Lonely

You know what is even cooler than a one-mana / zero-mana Phyrexian Giant Growth?

I haven't pored over the entirety of the New Phyrexia Card Image Gallery 100% yet (which you should), but I am pretty sure this is going to end up my favorite card in the set: 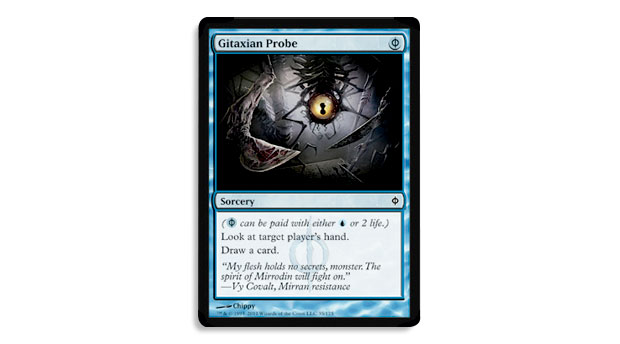 It might not be obvious to you why this card is so unbelievable.

In Standard... it's Ponder. That is, the rotation of Ponder has made my favorite deck to play (Jacob Van Lunen's baby, Pyromancer Ascension) somewhat less consistent. Sure, you still have Preordain, but what made the deck so unbeatable at its height was the combination of the two different one-mana blue card-drawing spells. 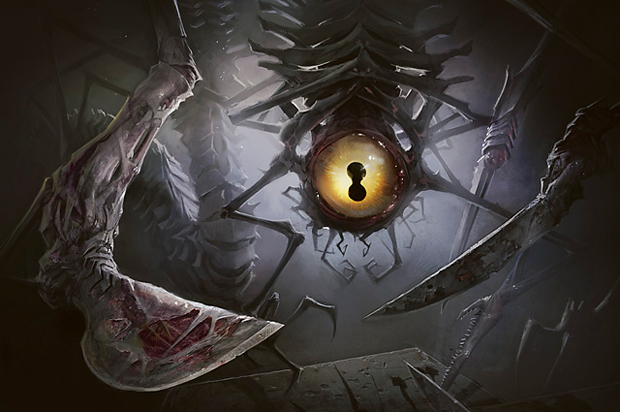 It's not just that you can play the card regular-like (and I probably would consider playing any one-mana blue dig spell, sorcery or instant), but Gitaxian Probe can help you constrict time. For example with a two- or three-Gitaxian Probe hand, you can really jumpstart a Pyromancer Ascension, while making everything smoother.

But you know what's even cooler? In Legacy, Gitaxian Probe... Well... It's also Ponder.


Gitaxian Probe can go straight into a deck like Shu's.

You can cut the Ponders and swap Gitaxian Probe right in (along with another one-mana / zero-mana blue Phyrexian option already getting plenty of Legacy-related press), in place of Ponder.

Why is this a potential upgrade when Ponder can dig for three and Gitaxian Probe can only dig for one?

Cephalid Breakfast might be the fastest deck in the Legacy format that actually gains a huge amount of value from knowing the opponent's hand. Move all in on your Cephalid Illusionist combo or wait a turn? Getting a gander on the opponent's Swords to Plowshares position is roughly as attractive as Zooey Deschanel in Elf, in this deck.

And even better? You don't actually have to be blue to play this card (or green to play the Giant Growth equivalent). New Phyrexia gives us a whole new palette of options, and all of a sudden your mono-green decks will have free countermagic, your red decks will be paying 2 life to execute Kor Firewalker, and Morphling only knows what other kinds of (wonderful) color chaos. 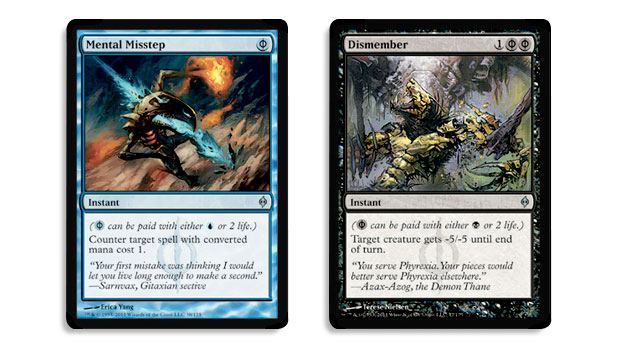 Will Hex Parasite finally contain the rampaging boogeyman that is Jace, the Mind Sculptor? 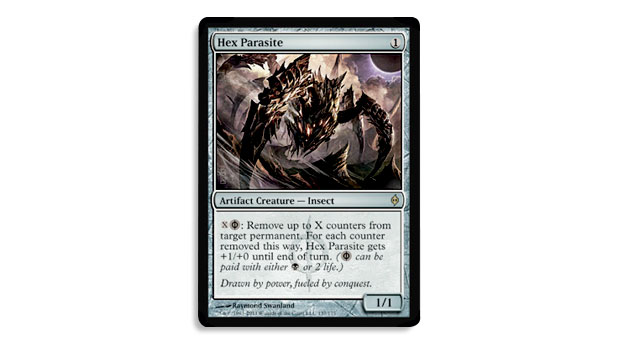 This card seems awfully good, can be used by any deck, and is quite discoverable by cross-format superstar Trinket Mage. 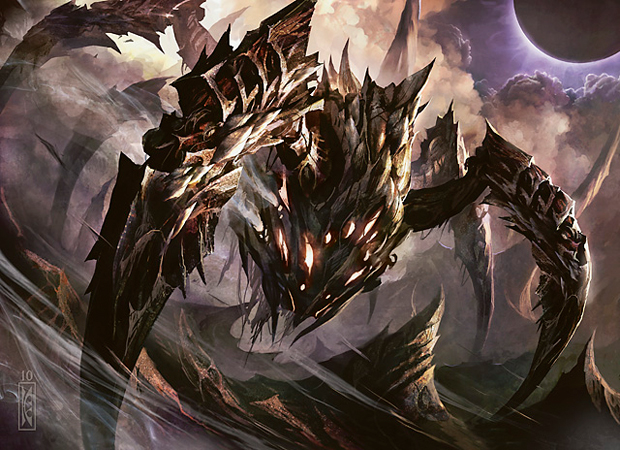 Jace isn't the only tier one threat that has to worry. Tumble Magnet, the aforementioned Pyromancer Ascension, and such mundane utility cards as Everflowing Chalice have all got to worry. Infect creatures? You guys also have to worry (sorry, original topic Glistener Elf)... Hex Parasite can gobble up your -1/-1 counters and turn them into positive power.

The world... Y'all have changed.

Let's keep it that way.