his week on Top Decks, we will talk about a couple of different tournaments... and give mad props (up to and including mad props given by other props-granting entities or Pro Tour Champions) as we examine the further development of Avacyn Restored in both small and Standard format sizes.

First up, Grand Prix Anaheim and Innistrad Block Constructed. Let's look at how the Top 8 shook out; or, these are the archetypes to which we will apply mad props:

Now on the subject of mad props, the Tournament Center coverage for Grand Prix Anaheim had Lalague's finals opponent Paul Rietzl complimenting the eventual winner's straight green-red as the best deck of the tournament. No small praise coming from one of the Pro Tour's most successful beatdown success stories... and a man who came within inches of taking this tournament as well. 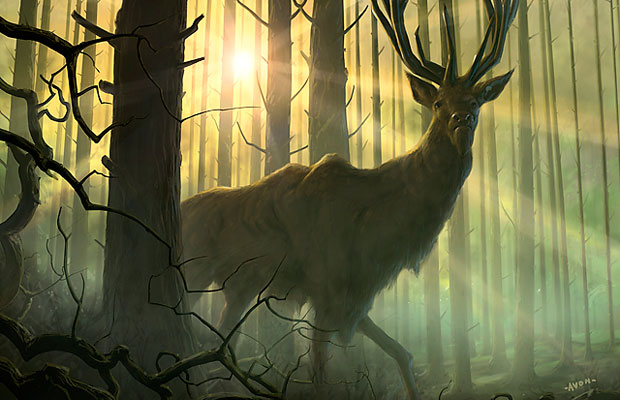 This is a relatively straightforward attack deck. We have some haste between Strangleroot Geist and Hellrider, set up to put the opponent on his or her heels.

And while many have made mention of Lalague's two-colorness, the fact is, his mana consistency seems to be among the best in the Innistrad Block Constructed format. Abundant Growth on one, Dawntreader Elk on two, Borderland Ranger on three... and Evolving Wilds on no mana at all could help the Anaheim champion line up whatever color was needed.

In terms of the powerhouse cards—your Bonfire of the Damned, or Zealous Conscripts, or even Devil's Play—these are cards that we have, for the most part, seen helping various other multicolor red decks succeed in Innistrad Block; Marc just had them more mana-consistently and possibly bigger, due to his ramp sub-theme.

That said, he had one more big thing going for his big winner: Dawntreader Elk, both as a defender and a catalyst.

If you review the semifinal coverage, Lalague's opponent Noah Koessel lamented his drawing three Elks in the first game. If you are a beatdown deck, a halfway mana-efficient 2/2 for two that can block—even chump block—with no loss of card advantage is exactly the kind of card you don't want to see on the other side of the table. It is kind of like a Sakura-Tribe Elder that can also get its beat on.

Now, there is one other thing that Dawntreader Elk provided that Sakura-Tribe Elder never had the opportunity to: morbid.

Dawntreader Elk is an awesome way to set up a 5-point Brimstone Volley. Nothing like getting exactly what you want... and profiting a little bit extra along the way.

There are two primary branches of Boros Beatdown in Innistrad Block Constructed: the kind with Rally the Peasants and the kind without!

The nearly indomitable Paul ran one Rally the Peasants. You can see the tuning in a deck like this relative to, say, Koessel's (below) in some of the individual card choices. In addition to a four-of Gather the Townsfolk (staple), Paul ran all four copies of Midnight Haunting, relative to Noah's one.

Among other things, lots of little guys in play make for more good Rally.

4 Champion of the Parish 4 Stromkirk Noble 3 Mikaeus, the Lunarch 3 Pillar of Flame 2 Grafdigger's Cage 2 Bonfire of the Damned

3 Cavern of Souls 3 Mikaeus, the Lunarch 2 Bonfire of the Damned
75 Cards

After Pro Tour Avacyn Restored, Brian David-Marshall commented that Rietzl's Cavern of Souls were the hardest working in the Pro Tour... Noah Koessel only ran three!

Their Caverns had to play Humans or Vampires on the first turn, later maybe a Devil or so.

From a functional perspective, Koessel's big differentiator was to play the maximum number of Fiend Hunters. While Fiend Hunter isn't a great offensive threat, especially if you assumed coming into Anaheim that Wolfir Silverheart was going to be the biggest threat on the block, Fiend Hunter was certainly a good way to defend while gaining tempo.

How amazing was this Top 8, by the by?

Two different Pro Tour Champions (one of whom is a two-time winner, Hall of Fame member, and reigning US National Champion)? ... and Eric Froehlich (another multiple-Top 8 super stud)?

Structurally, the two Jund decks played essentially the same cards and most of the same functionality. They just had their cards in different places; for example, all of Kibler's Huntmaster of the Fells were in his sideboard, whereas Rosellini played all of his in the main.

Jund in Innistrad Block—these incarnations in any case—is a con-fusion of powerful cards and high-quality midrange creatures. Both Rosellini and Kibler used Scorned Villager to accelerate from two to four and had a fairly heavy four-point on the curve... Olivia Voldaren, Falkenrath Aristocrat, and Garruk Relentless (Kibler played all four).

How can we sum up the Jund? It seems like a deck that just has tons and tons of the best cards in the format... Bonfire of the Damned, Wolfir Silverheart (Jason played four copies of both of these in his main), plus tons of removal. Rosellini could even win with Kessig Wolf Run.

Both of them could pay the "iron price" for the opponent's permanents, stealing wins as they stole permanents with Zealous Conscripts.

A moment ago we referenced Eric Froehlich as one of the huge-name Magic pros showing off the skill-testing-ness of the format. EFro did so with an update to the PT-winning deck!

Froehlich played an update to Alexander "Insane" Hayne's White-Blue Miracles deck. As some mages predicted for the evolution of the format post-Pro Tour, the Miracles deck went red.

I think if you posed such a switch to most players, they would have automatically assumed Bonfire of the Damned as a four-of; not only did Froehlich run just the one, his red splashes where relatively sedate. Sure, he could get much faster on defense with sideboarded Pillars of Flame, but his main functionality improvements (from red) weren't even based on miracles themselves!

While the front side of Rolling Temblor is both sub-Pyroclasm and sub-Earthquake, flashback is an extremely powerful mechanic. This card gives the miracles shell even more tools for fighting off the early game beatdown. Remember, the late game basically belongs to miracles!

Big. Different. Finisher. Other teams actually built their whole strategies around this creature (main deck). Running Gisela out of the board when you are a creatureless deck starting is safer against Zealous Conscripts decks (they are not automatically prompted to side in their all-star fives). And when she is on? It's often quickly over.

Basically, Bant is a "combo" deck in that it can play a non-interactive game: second-turn Invisible Stalker, start applying enhancement cards, ideally win the game quickly via cards like Increasing Savagery.

Main upgrades for Sittner's version were in the sideboard. Instead of Undead Alchemist, John played extra Dissipates for White-Blue Miracles and similar big-spell decks. Seeing as how few people outside team SCGBlack even knew what Undead Alchemist was for* this seems like a safe upgrade based on the Hayne win in Barcelona.

Michael Hopkins rounded out our Top 8 with a similar, yet substantially differentiated Angel of Glory's Rise reanimator deck.

So what's different between this deck and the one we saw in Barcelona?

Avacyn's Pilgrim is a substantial addition, especially for a deck that wants to hit Borderland Ranger and might need a solo

for the back half of Unburial Rites. Avacyn's Pilgrim essentially gobbles up the main deck slot once held by Cathedral Sanctifier. 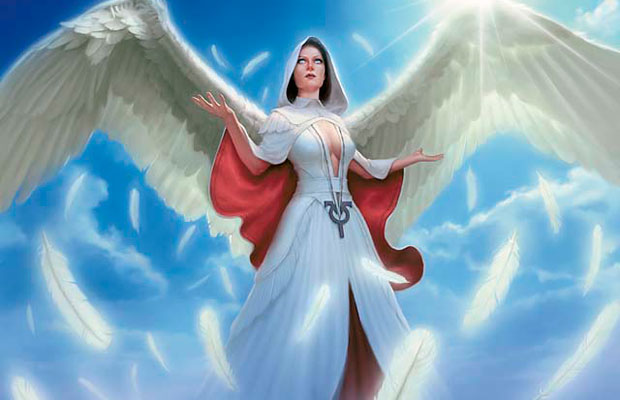 Michael had lots of stuff going on linked to the number of creatures he had in play. The solo Champion of the Parish can benefit from having lots of humans come into play at the same time. Geist-Honored Monk might not look like a big threat by its lonesome, but in this deck, it can certainly masquerade as playing one on TV. Finally, Blasphemous Act is potentially cheap (Michael can have lots of little guys in play) and painless (Angel of Glory's Rise is just going to get his side of the table back).

All in all, a powerful and fun combo-like deck!

Grand Prix Anaheim certainly seemed exciting! Innistrad Block Constructed—at least in this tournament—really did a great job of highlighting some of the game's best players. But there is another highly relevant format raging right now. How does Standard look?

Here is the Top 8 breakdown from the most recent StarCityGames.com Standard Open, from Nashville, TN:

Rather than fixating over much on the six disparate Delver decks, I just thought I would highlight the triumphant return of Gerry Thompson to the winner's circle; his White-Blue Delver deck was the top of the hop in this event (incidentally, he finished one match out of winning the Legacy event the next day, as well). Certainly deserving of mad props!

Superficially... a Delver deck. It has the potential speed of a fast beatdown deck (play a flying Wild Nacatl on the first turn), but can play a cerebral tempo/control-ish game. Gerry seems to eschew the Invisible Stalker + Runechanter's Pike model, instead bringing back Sword of Feast and Famine! 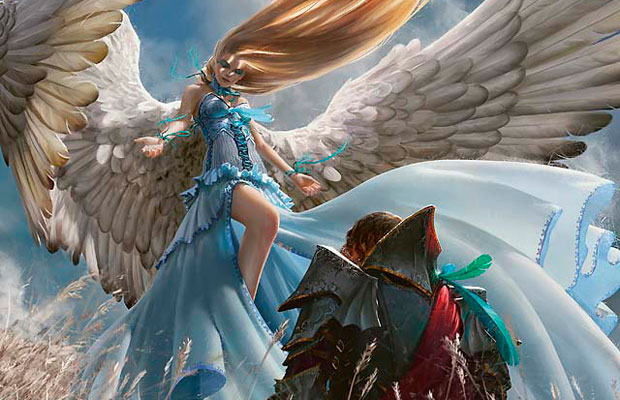 Gerry's choice in a non-white/non-blue Sword seems not to have failed him, as he cut through several other Delver decks along the way to the Open win.

There are no substantial token-production cards in this deck; rather, a switch to Restoration Angel, plus the return of Dismember to the big tables.

You can check out all the Delver decks (plus a pair of Zombies) here.

After Calcano's win with blue-red and the resurgent Swordsmanship evidenced by Gerry's win, it seems like it is once again a great time to be a Delver of Secrets in Standard!

* Hedging their bets in case someone broke self-mill reanimator.