agic 2013 is finally available on Magic Online. Last week, we had an opportunity to see what the last days of pre-M13 Standard looked like. This week, we get to see how players on Magic Online have decided to approach the new format. Magic 2013's Magic Online release was just this Monday, meaning that last Saturday's daily events were still pre-M13. I've decided to look at the 4–0 daily lists from Monday, July 30, instead of the results from last Saturday's events. This ensures that I'm not giving you old information. 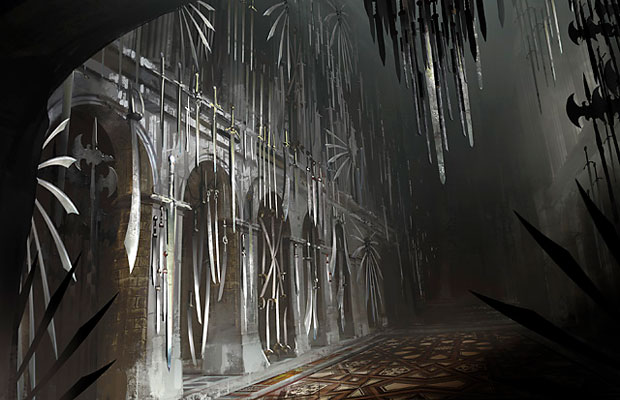 There's a lot of new Standard information with the addition of M13. I'm going to focus exclusively on Standard this week in an effort to fully explore the innovations that Magic Online players made on the first day of the new set's legality. Next week, I'm going to build some of the most exciting Daily Event winning decks with Magic 2013 cards and play a few matches.

The last days of pre-M13 Standard on Magic Online were dominated by Delver of Secrets strategies. The format had just dispersed into many viable archetypes, but the Delver decks found ways to adapt and, once again, homogenize the archetypes at the top of the standings.

The first day of Magic 2013's Standard legality on Magic Online gives us a solid understanding of what the enemy (Delver) is going to look like and gives us a glimpse into some of the new archetypes that are going to become possible with the addition of M13 to the available Standard card pool.

Let's take a look at the decks that managed to go 4–0 in Daily events on Monday, July 30: 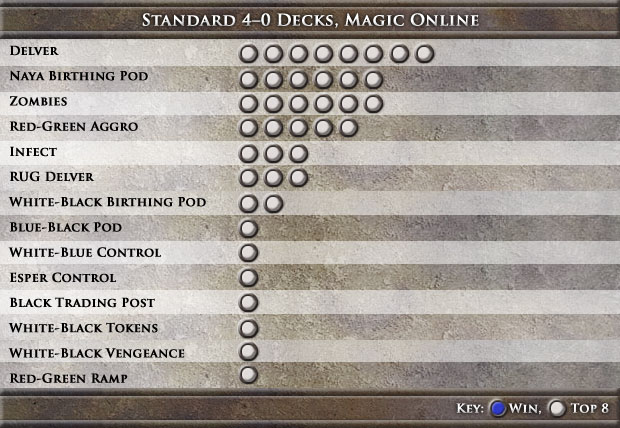 It's normal for the most well-established deck to perform well in the first week of a new format, but Delver posted exceptionally impressive results this time around. To be fair, a lot of this has to do with card availability. The new format looks like it has a great deal of promise. These are just the results from the release day, so there will be a lot more information available here by the time of this publication. Magic 2013 has breathed new life into old archetypes like Infect and Tezzeret and paved the way for new strategies like Genesis Wave Combo. I'm impressed with the ingenuity of Magic Online's player base; it's rare that a format looks this diverse on the release day of a new set.

There are a number of small changes that seem to be occurring sporadically in the different Delver lists with the inclusion of Magic 2013: Augur of Bolas; Talrand, Sky Summoner; and rehashes like Mental Misstep and Mutagenic Growth are all being played in some lists. All successful Delver decks seem to have fifteen to seventeen creatures (always including Delver of Secrets, Geist of Saint Traft, Snapcaster Mage, and some number of Restoration Angel) and twenty to twenty-four instants and sorceries.

The most noticeable common thread among new Delver decks is the inclusion of three or (usually) four copies of Gut Shot. Gut Shot gives Delver the tempo boost necessary to compete with a green deck's best starts even when on the draw; the card seems to have targets against everyone these days and I wouldn't be surprised if four copies of Gut Shot became stock, at least until M13's effect on Standard is better understood. ShaSha's Delver list is pretty basic, but it does a better job of exemplifying what makes a successful Delver deck win right now than any other available list from Monday's Daily Events. I would recommend trying one of the black-based aggressive strategies like Black-Red Zombies or White-Black Pod if you're having a lot of trouble dealing with the latest Delver menace.

Don't worry! The new format has plenty of new goodies besides Delver lists with four copies of Gut Shot. Gorman87 piloted this spicy little number to a 4–0 finish on Monday. The deck is beautiful; every card is a necessary cog in a well-oiled machine. It can play a number of Angels, and you can achieve very fast kills with all your 2-power one-drops, but the deck is almost impossible to beat in a long game.

In order to best attack the White-Black Pod deck, you're going to need to repeatedly present it with unfavorable races. Gorman87 only has one card from Magic 2013 in the main deck; Disciple of Bolas gives this Birthing Pod deck a surprising activation that will almost always end the game. This works particularly well with Geralf's Messenger, but any situation when you draw at least three cards is going to be very strong. Bloodthrone Vampire also has a good amount of synergy with Disciple of Bolas, often letting you draw a huge number of cards and gain a ton of life after doming your opponent for a lot with a Blood Artist. This deck has some really scary Birthing Pod chains and it seems like there's a lot of room for improvement as the lists get tighter. Using Birthing Pod to grab Morkrut Banshee seems very impressive to me and I'm expecting future lists to include a copy of Reaper from the Abyss to make things even crazier.

4 Bonfire of the Damned 2 Pillar of Flame

3 Hound of Griselbrand 3 Huntmaster of the Fells 3 Thrun, the Last Troll

4 Copperline Gorge 3 Huntmaster of the Fells 4 Bonfire of the Damned 3 Thrun, the Last Troll
75 Cards

Mad03 has an interesting take on one of the most well-established archetypes in Standard. Red-Green Aggro has been strong for a while now, but the addition of Rancor makes the deck even more impressive. A lot of players were worried about including Rancor in a format with Vapor Snag, but this list works extra hard to punish opponents if they ever tap out. Hound of Griselbrand has been seen as a sideboard inclusion in Blue-Red-Green and Red-Green-White Birthing Pod strategies, but Mad03 recognized its incredible synergy with Rancor and decided to play three copies in the main deck! This is the perfect type of deck for Rancor; cards like Strangleroot Geist, Hound of Griselbrand, and Wolfir Avenger ensure that Rancor is going to have some value at some point in the game.

Green-White-Blue Birthing Pod decks have had scattered success in the past few weeks in Magic Online Daily Events, but the deck seems to gain a lot of new action with the addition of Magic 2013. Thragtusk and Elvish Visionary give the deck a brutal midgame that's sure to crush any sort of non-blue aggressive strategy. Post-board, the enters-the-battlefield triggers can get completely out of hand with Deadeye Navigator. I'm excited to see what direction these lists take in the coming weeks; there's a lot of power available in post-M13 Pod decks. Naya Pod lists have access to Bonfire of the Damned and Zealous Conscripts, but the Bant version of the deck gets access to Phantasmal Image. Phantasmal Image has always been strong in Birthing Pod strategies, but it's really impressive when the deck has access to Thragtusk.

The most exciting deck to go 4–0 this week is an Esper Tezzeret brew piloted by Batterskull. The deck takes advantage of my two favorite cards from Magic 2013: Staff of Nin and Trading Post. Staff of Nin is like a Planeswalker that can't be attacked. The board presence of Staff of Nin is brutal; if this deck is able to land a Staff of Nin into an empty board then it's almost checkmate for any green opponent. Trading Post is another card that has a incredible power level. Batterskull chose to only play three copies of Trading Post—this might be a result of card availability (M13 just came out that same day)—but I feel it's worth noting how insane Trading Post can be in multiples. This deck goes bigger than anything else in Standard, including Primeval Titan decks. I wouldn't be surprised if this became a format staple in the coming weeks.

Infect has not performed exceptionally well in recent Standard events, but Jroleksy and a number of others have recognized the power that Magic 2013 brings to the archetype. Cathedral of War is a huge bonus to an infect strategy and Rancor is probably the best pump spell available. Mental Misstep is at its best in this type of strategy because opponents will often mold their entire game plan around a single Vapor Snag or Pillar of Flame. Infect certainly gained a lot from M13, but I'm skeptical whether it will be enough to make the archetype a viable player in the new Standard metagame.

This is only a taste of the changes that Magic 2013 will bring to the Standard format. The problem of card availability will become a non-issue by next weekend and we'll start to see what the format is going to look like in the long term.

I'd like to include some match reports in next week's column as an introduction to the new archetypes made possible by Magic 2013. Hit the forums or shoot me an email with requests for which deck I should pick up and battle with. Hop on Magic Online now to join the festivities of M13 release week or join a Standard daily and take your latest brew for a test drive!