ello and welcome to Pro Tour: Return to Ravnica week here at DailyMTG.com. We're just one day away from the big event. Tomorrow, the best players in the world will descend on Seattle to battle it out in Modern and Return to Ravnica limited. The whole community is abuzz about what's happening in Modern. Last week, anyone would have been quick to say that Jund or Delver would be the deck to beat coming into the Pro Tour, but the most recent Magic Online events paint a much different picture.

Magic Online tends to be about one week ahead of the paper metagame, but Pro Tours can be very different. The best minds in the game have been spending the past few weeks trying to find the best available archetype coming into the event. Many teams will have focused trying to construct the best Jund or Delver deck, but the strongest teams won't be so narrow in their testing. Instead, we'll be seeing a lot of the best players battling tomorrow with brand new archetypes that we've never seen before. 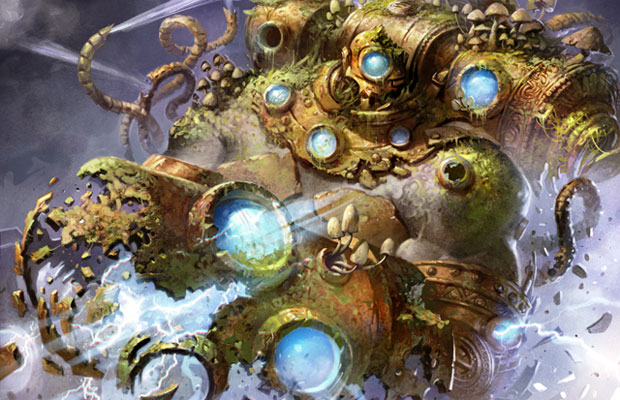 It would be extremely difficult to guess which deck posted the strongest Modern results since Return to Ravnica's Magic Online debut, unless you've already done your homework. You might be quick to say that Jund is the best deck coming into this event, Abrupt Decay gives the deck significantly more resilience to the unknown and the deck was a clear format favorite for the past few weeks. Then again, you might think that Delver's popularity and exceptional performance were enough to help it regain its place on top.

In fact, the deck with the strongest finishes is a White Weenie lifegain deck.

I'll give you a moment to let that sink in. My brain almost fell out of the back of my head when I was looking at the numbers.


This is a very traditional White Weenie strategy that adopts a lifegain strategy to make cards like Ajani's Pridemate and Serra Ascendant into massive bodies. One of the most attractive elements of this deck is Martyr of Sands. Gabriel Nassif once explained to me that Martyr of Sands can give you some matchups that are extremely difficult to lose. For example, it's hard to imagine a red deck standing a chance against this in three games.

It will start to make sense when you think about this deck's position in the current metagame. This deck is an absolute nightmare for Jund. Ranger of Eos has always been my favorite plan against Jund and every list of this archetype either has three or four copies. The deck not only does well against Jund, but it's also a nightmare matchup for most versions of Delver. In fact, the only thing this deck is scared of are combo decks which seem to be hiding in fear from the "top" decks' massive disruption suites.

I've been in contact with some testing groups for the Pro Tour and I'm sure that this deck wasn't on their radar a week ago. The knowledge of this deck's strength in the format could have a big effect this weekend. There isn't much time for the format to react and most players will be very scared of going the combo route as long as there is reason to believe that Jund will be the most played deck.

I wouldn't be surprised if we saw some Serra Ascendants battling under the bright lights of the Pro Tour's Sunday stage. Again, people are going to need to react quickly if they want to beat this deck. A lot of groups are going to be impressed with this deck the first time they run it through their gauntlet and this may be the breakout archetype of the format.

This deck isn't a one hit wonder that I found in a pile of Daily Event results. In fact, this archetype has more 4-0s than any other in RTR Modern (at the time this is being written.) and it even has the most 3-1s. It's not just a few sickos; it's a full-blown pandemic.

The other surprise winner this week is Melira Pod. This was the deck to beat for a large portion of last year's Modern season. This is one of the few combo decks that performs reasonably well against Jund. The deck isn't perfect, but its resilience to hate, consistent gameplan, and reasonably fast clock are all huge selling points for the deck.


Melira Pod is a combo deck that uses Melira, Sylvok Outcast in combination with Viscera Seer and the Persist mechanic to create infinite loops that can result in gaining a arbitrarily large amount of life via Kitchen Finks or just killing your opponent with Murderous Redcap. Cards like Harmonic Sliver and Tidehollow Sculler make the deck have a lot of resilience against targeted hate. Ranger of Eos can make the whole combo by himself thanks to Birthing Pod. Reveillark is another powerful combo piece here. I'm interested to see how this deck evolves before the Pro Tour. Jarad's Orders seems pretty good in Modern and I wouldn't be surprised if people took advantage of it at the Pro Tour; Crypt Champion combo anyone?

The new standard environment is experiencing a Zombie apocalypse, but one might not expect Zombies to be making such a splash in the Modern metagame. Remember Blasting Station? Well, Blasting Station and a number of other offbeat spells are making waves in the new Modern format in a deck that looks like it was inspired by Sam Black's legacy Zombie concoction.


This deck aims to put its opponent under a lot of pressure in the early game to soften up their life total enough to start grinding away the late game with cards like Blood Artist and Blasting Station. Gravecrawler works very well with Blasting Station, allowing you to translate a single mana into a single damage at will. Your opponent won't be long for this world if you throw a Blood Artist or two into the mix.

This deck doesn't look perfect to me. I'm especially worried about having less than four copies of Dark Confidant. However, the general strategy of this deck seems very strong. The deck will be an absolute house against people that want to interact with their opponents. This isn't exactly where I want to be against the white lifegain deck, but this is another example of a deck that's strong against Jund and still has a lot of game against an unknown field.

The deck's access to black and white gives it more game against combo decks than a deck like Soul Sisters. Zombie players can commit to cards like Thoughtseize or Tidehollow Sculler out of the sideboard and have a very reasonable chance of sawing away the opponent's life total before the combo deck goes nuts.

Recognizing the decline in Jund's popularity, one player decided to pick up an old favorite and see if robots in the redzone could still make something happen.


This deck aims to play an extremely aggressive game with efficiently costed bodies that can swarm the board and steal games from underneath its opponents.

Affinity strategies are no stranger to winning, but there's a lot of hate out there and a player assumes a massive risk when they decide to play this deck in a tournament. Cards like Ancient Grudge are still very common. It's almost impossible to beat an Ancient Grudge with this deck and things get worse when you factor in the card advantage engines being played by the Ancient Grudge decks.

The deck functions a bit differently than it has in the past. Inkmoth Nexus lets players dump a ton of +1/+1 counters on a flying infect creature to steal the game out of nowhere. Vault Skirge allows pilots to build their own Baneslayer angel at will. Steel Overseer functions perfectly with the swarm draws and forces opponents to use their early turns tapping out for removal spells instead of establishing a board presence, allowing the artifact deck to take the game over with a Cranial Plating, Arcbound Ravager, or Master of Etherium.

Even with rampant hate, affinity still has some of the best draws in the format and Cranial Plating is still very capable of stealing games. I'd expect to see more artifact aggro strategies than you might have expected to at the Pro Tour this coming weekend. 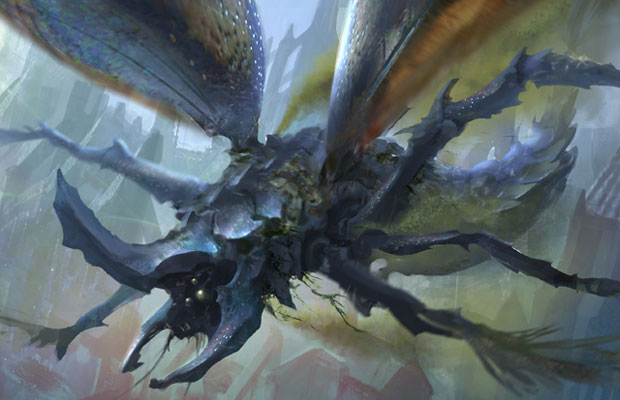 We'll have to wait until tomorrow to see what the pros have brewed up for Modern, but their Modern brews will only be half the battle. Return to Ravnica limited is proving itself to be a difficult format which rewards skilled players. This week is the Return to Ravnica Release on Magic Online. All week, the best players in the world have been flooding the draft queues on Magic Online, trying to perfect their strategies and put them in a strong position to dominate the limited rounds of the Pro Tour.

Right now is a great time to hop on Magic Online and jump in some draft queues, this is your chance to play with the best of the best. Don't miss a chance to try the new beta client too! The majority of limited testing for the Pro Tour takes place on Magic Online, this is an aspiring competitive player's best chance to be a part of the learning process for an upcoming Pro Tour.

Don't miss the coverage of Pro Tour: Return to Ravnica tomorrow, Saturday, and Sunday right here on DailyMTG.com to check out all the latest in Modern tech and limited learnings. Tune in next week for a full blown analysis of the new Standard metagame.