f you'll allow me to over-generalize, there are two types of commanders for Commander decks: Those that do something outside of combat, and those that are meant to smash opponents. 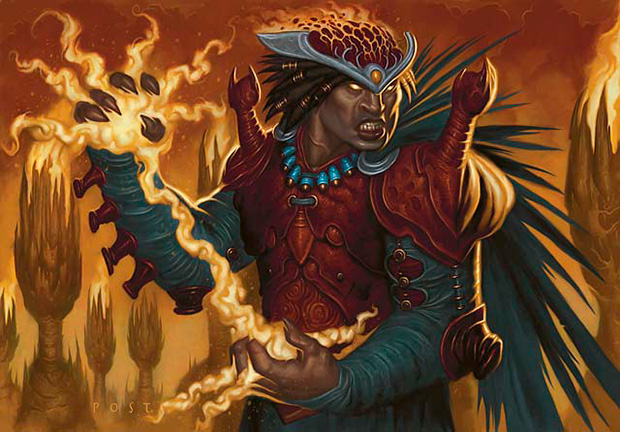 Bucketing commanders into these two piles is impossible because it isn't so simple. Kresh the Bloodbraided and Kaervek the Merciless have straightforward appeal. Commanders like these are what first drew me into the format, as they pull me toward playing Magic how I enjoy it most. What thrilled me even more is that the rules of Commander ensured I'd always have multiple chances to crack in since I could (almost) always just cast my commander again from the command zone. Commanders that attack have this tendency to die, so getting them again and again is important.

Of course, this is preview week for the upcoming Commander (2013 Edition) release in a couple weeks. Naturally, I have a sweet card to share. Since we're talking about commanders that attack, you can assume the following are true about my preview:

Easy, right? So without further ado, let me introduce you to Opal Palace: 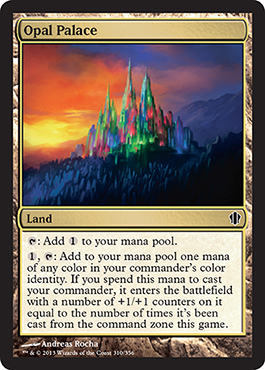 I can't wait to build a Commander deck around... a land?

The first foray into cards designed specifically for Commander brought us Command Tower, a land nearly as good as a basic land that gets even better for more colorful commanders. (More importantly, it gave us an excellent title for a Commander-focused column.) Popular and powerful are the two words I use to describe it, and I think Opal Tower will quickly be similar.

When your commander dies you can put it back in the command zone, where, for an additional

each time, you can replay it again and again. Opponents know once is usually never enough for powerful commanders that are worth the effort to kill, and that explains why removal like Oblation and Chaos Warp are more common than you might expect. Opal Palace plays right into the fact that your commander will die.

At worst, Opal Palace is Shimmering Grotto. It will dutifully filter your mana and help ease those moments when a specific color is needed most. It also doesn't come into play tapped, so even in decks without many color requirements including this won't slow you down. It isn't quite as potent as Command Tower for colors, but with the right choice of commander Opal Palace is even stronger... and I don't just mean aggressive commanders that die often:

Opal Palace is mana fixing, commander enhancing, and combo supporting. It's a new staple from a new Commander release, and I look forward to slamming it into decks. Don't you?

While fixing mana and doing cute things with Opal Palace is fine, there's some subtlety to attacking with commanders that many of you shared. There were three main categories of attacks, the first being attacks of opportunity.

I usually cast Mayael the Anima turn three or four but I rarely have the mana to activate her until turn seven or later, and I'll usually have a creature or two in my hand that costs six and is better than gambling on the top five cards. Those things mean I usually have Mayael sitting in play three or four turns without being used. When that happens, I'll usually attack somebody without creatures in play. I don't plan to win with commander damage but just to soften up the opposition for my late-game fatties.

I recently shifted to a new group where blue is much less prevalent and most control decks are in red or black. Gift of Immortality now gets placed on Mayael rather than another creature that will be attacking later in the game. But that is the only protective stuff I use on Mayael.

I love these opportunistic attacks. When I played a Rhys the Redeemed deck, rare was the turn I couldn't active him for tokens... except for the second turn of the game. Dealing 1 point of damage was miniscule against the 120 life or more I'd have to handle, but when there's no clear reason not to attack, attacking is a great idea.

It's tempting to "turtle up" in multiplayer by avoiding attacking, incentivizing opponents to attack elsewhere, and generally looking to shield and protect one's self rather than find ways to defeat opponents. Attacks of opportunity are part of an alternative way to handle multiplayer. 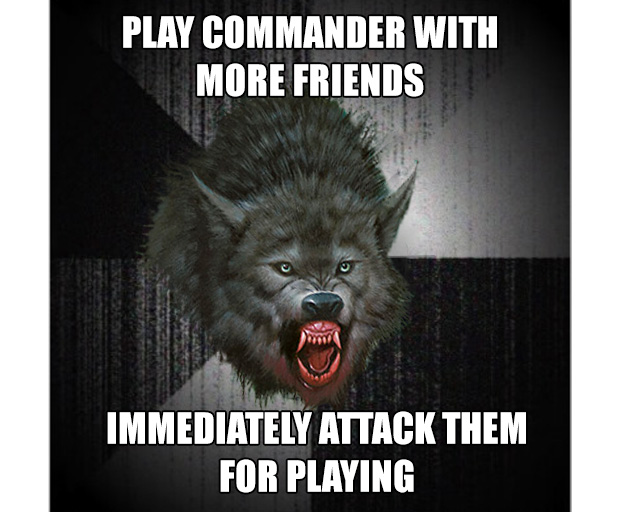 Attacking early can also encourage your play group to shift some focus to parts of the game that can be forgotten in a sea of Dragons and mana. Attacking to trade off against opponents' creatures can be powerful.

I like to attack aggressively with my commanders. In my commander-centric decks like Bruna, Light of Alabaster and Rakdos, Lord of Riots the commanders are fatties themselves and can't be easily blocked to death, while dealing a big amount of damage or even killing the opponent immediately. In other decks, like Riku of the Two Reflections, where the commanders are more fragile but not necessary, I'd like to trade them with a creature on the field. It's card advantage, after all. Take the opportunity to kill some creatures if you can win without your commander!

I'll admit that I'm a fan of annoying creatures like Acidic Slime. Blowing up someone's sweet artifact and having an annoying attacker and blocker left over is exactly how I like to manage a multiplayer game: keep it moving and make players make decisions. Fabian's approach negates a lot of my strategy since he'd just trade off the Slime and unlock the rest of his army.

The third way many of you looked at attacking with commanders was the most common and potent: tricky surprise attacks.

I run an Adun Oakenshield deck. I love to play Jund and almost none of my play group has ever seen an original Legends card. Adun is a very underrated attacker boasting stats of 1/2. His ability is amazing, though, paying black-red-green and tapping to put a creature back into my hand from the graveyard.

As soon as I saw the bloodrush mechanic I had to have it in that deck. So I slip Adun onto the field while I ramp up enough mana do drop a few "bloodrushers" on him. I try to tutor up Rubblehulk and Wrecking Ogre. Oftentimes I can swing with Adun, he'll get ignored (or I make him unblockable) and then drop those two onto him for a single-hit kill. Next turn I can put one of them back into my hand with his ability and then prep for another assault. Much like the Spanish Inquisition no one sees it coming.

While Nik's strategy becomes obvious after showing it the first time, the premise of surprising opponents with a deadly attack was an easy one to share. Some commanders naturally lend themselves to strategies of killing with unexpected interactions. Some, with just a little encouragement, can kill (or just about kill) opponents in one shot:

It's a dangerous line to go down since leaving two or more opponents aware of what you're up to usually means you're in for a rough ride for the rest of the game. The risk of a one-hit knockout shouldn't deter you from trying it, but it's a dangerous place to be with multiple opponents left.

It's why I'm a fan of strange, hybrid-type commanders that can both attack and provide me something else if that's not an option. Since you held out through the community feedback, it's time to surprise you with another preview from Commander (2013 Edition).

You didn't seriously think the Commander column wouldn't get an actual commander to show off? Meet Roon of the Hidden Realm: 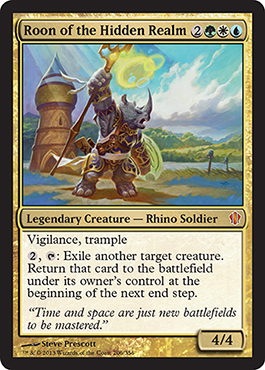 Roon is a strange fellow, but the more I've thought about him the more I've come to appreciate what a flexible guy he is. Five mana for a 4/4 isn't shabby, but vigilance and trample beg for Roon to be attacking. Whether you go the route of Auras or Equipment, outfitting Roon for a frontal assault still leaves you with a great blocker.

It's what's in his other lines of text that intrigue me the most.

This isn't Cloudshift or Momentary Blink on a stick. I wouldn't say it's necessarily better, either. Galepowder Mage has the same type of delayed-return-flickering but requires an attack to pull it off. Roon... doesn't. In fact, if you couldn't attack or block with Roon the very least you could do is blink something away until the end of the turn.

As a fan of flickering I can tell you there's tons of fun to be had bouncing your own creatures around, as well as wiping away opponents' tokens, or even messing around with combat. The possibilities with Roon are pretty spectacular.

Which leads me to the question of the week: How would you build a Roon of the Hidden Realms deck, and which five cards would best represent that approach?

As an optional bonus, if Roon really trips your trigger you can include an entire decklist too! Just remember that your decklist must be formatted like so:

Join us next week when we finally get to the Greek for Commander. See you then!