here are lots of different ways to excel at tournament Magic. In recent years we have seen pure power rewarded to an arguably disproportionate degree. Last year's Constructed Top 8s featured the fastest version of the best and fastest deck, the fortune of topdecking Cruel Ultimatum at precisely the right moment, and the cleverness to play Bitterblossom and Mistbind Clique in the same deck. Sometimes we see really powerful decks get those single-digit-turn kills, pick up the crowd-pleasing seven on the last possible draw step, or grind that hated Clique into our once-high spirits before we even have that fourth land in play. We can easily dismiss an opponent's good fortune as simply "getting lucky," but the fact of the matter is that these decks are built with certain capabilities .... Anyway, sometimes the opponent isn't getting lucky at all!

Case in point: My favorite strategy (at least in pre-Zendikar Standard) is arguably a power-centric one, with big and splashy spells ... but laced together in such a way as to look like it is getting lucky when in fact that's just the way it rolls.

You may notice that I finally gave up on my beloved Borderland Rangers and now play an eight-pack of three-mana discard spells only (this is something I picked up from reading Gerry Thompson). Before I started jabbering a lot about this strategy, opponents would routinely go on tilt after losing all their cards. "I can't believe you drew three Blightnings!" Or .... "Two games in a row? What do you do? Only draw Blightnings?"

A few weeks ago when I made Top 8 of the Edison, NJ PTQ with a straightforward Blightning Beatdown deck, I said that one of the main reasons I went that direction is that if you draw two Blightnings, it doesn't really matter what the opposing deck is (unless it features Wilt-Leaf Liege, that is!) .... Your opponent is usually just miserable, has no cards, and loses to your Goblin Outlander or whatever. In the Cascade Control deck, basically every card is a Blightning. You cast a Blightning on the third turn, and then follow up with a Bloodbraid Elf that is a Blightning (or an Esper Charm that usually pretends it is a Blightning). The next six cards that you play for the rest of the game end up being some kind of Blightning. They usually do some other absolutely soul-crushing thing first, but then they end up being a Blightning, and the opponent ends up complaining you drew so many Blightnings.

You look like you are super lucky guy... But the fact is, you were always going to get a Blightning. That's just how it goes!

The other somewhat oddball feature is the inclusion of Deny Reality.

It took us a long time to get to this point, but input from Brian David-Marshall and a smattering of our followers on my Twitter feed taught us that cascade is a linear mechanic. It doesn't look like a linear mechanic. People have been using it to find Seismic Assaults or finish up on Maelstrom Pulses (or Borderland Rangers, if they are particularly virtuous individuals), but the strategy starts looking very different if you just play with cascade spells, as we have chosen to do in this build.

Your Cascade chains can either end in a Baneslayer Angel or a Blightning of some kind (the first eight, that is). That means that basically every spell you play going into turn five or six ends up with the opponent discarding two spells. Especially once you've started exhausting the three-mana spells in your deck (making them rarer, and less likely to come up before a more expensive Cascade card), at the point that you are playing Enlisted Wurm (or Enigma Sphinx), you are actually likely to look like you've won the cascade lottery!

(That's what they always say).

And it is a nice Ultimatum, isn't it?

You look like you are getting lucky, but the fact is that you built your deck to look that way. It can be difficult for the opponent to see, because he or she has probably discarded six cards at this point, but your Enlisted Wurm-come-Ultimatum might have been worse .... You might have gone Wurm into Baneslayer Angel! 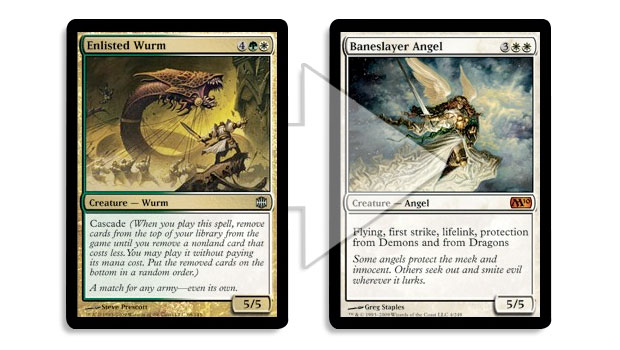 Like I said, it took a while to get to the point of building a cascade deck to really embrace the cascade mechanic. But when you've got matters rolling, things start looking easy. This comes from building your deck to snowball on what should be obvious synergies. The rest of this article is an attempt to do the same things using some obvious (and not so obvious) new cards, tricks, and hidden linear strategies from Zendikar.

It Starts with the Mana Base

There has been some chatter, you know, everywhere about Mono-Black Vampires as a viable Zendikar Standard archetype. I feel like if this is the case, we will see a lot of mana bases that look a lot like the one I just posted. Why? Because the Borderposts build on a Zendikar-enabled Black strategy in subtle yet superlative ways.

First of all there is this kicking new mechanic called landfall, and playing with the maximum number of in-color fetch lands gives you some very nice additional landfall action ... but so does playing with the Borderposts. The Borderposts allow you to pick up lands (without using your land drop for the turn) and "recycle" the same lands for more landfall. All your "eventual" lands are Swamps (just like no matter how convoluted a path you take to your threes, you are always going to cascade into Blightning or Esper Charm) ... so even though you have eight nonbasic lands, there is never any conflict on setting up your Borderposts. That's just how you roll.

But those sixteen non-SwampSwamp buddies do something extra special ....

They make friends with Vampire Nocturnus! 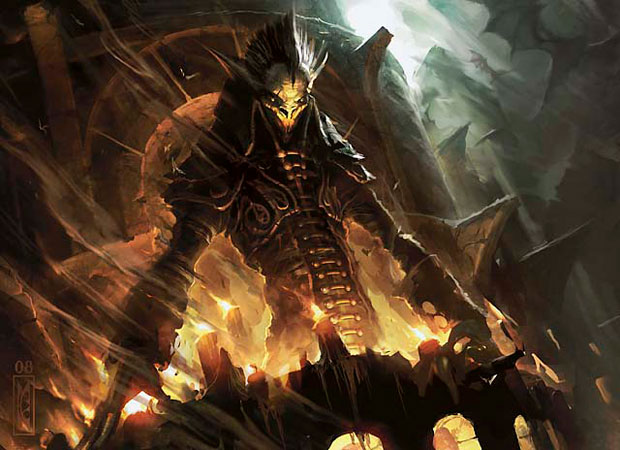 The mythic rare from Magic 2010 is like a big brother to the Zendikar Vampire tribe, and really likes to see black cards on top of the library. The presence of the Borderposts gives Vampire Nocturnus a greater chance of getting his Unholy Strength on, by turning land slots (effectively) into spell slots for purpose of color-checking. Plus ... the fetch lands let you roll again if you don't like what's on top!

This package is a great example of how seemingly completely unrelated cards can increase the consistency of your tribal linear theme, with only very slight modifications to what would be the "obvious" starting block.

Pro Tour legend Mike Long once asked me "In this game, what are you looking for but a two-for-one?"

Grim Discovery is a fast, easily exploited two-for-one that will fire consistently, and is built to make your deck more consistent.

Let's think about another style of mono-black deck (or maybe you can run these synergies into Vampires) ... Mono-Black Control. We have Mind Sludge back, and we certainly have a thick, juicy, stack of powerful black cards, covetously covered in black mana symbols (or alternately, demanding that we play lots of Swamps, like Tendrils of Corruption).

There are two clear signals when we start building this kind of a deck:

Grim Discovery helps us to accomplish both of these goals. The card can turn two land drops into three land drops, and when you start considering Architects of Will as a black Opt, you can see both the synergies and early-game consistency build upon each other. 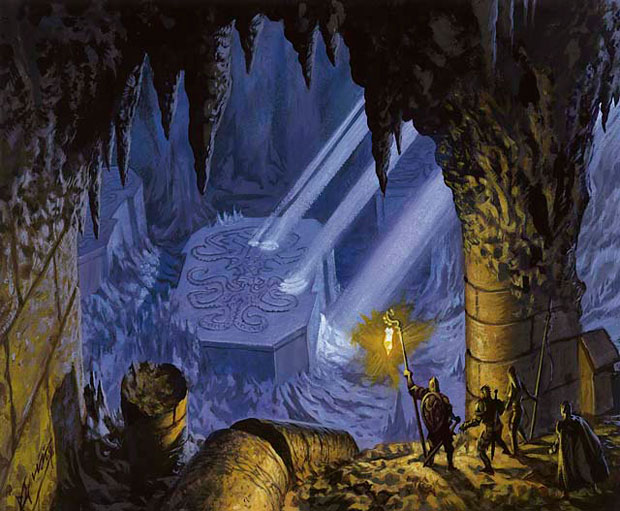 This is likely going to be a strategy built around using your turns and meting out your one-for-ones to eventually accomplish big things by hitting one big spell. You know, hitting your land drops and managing your life total long enough to stick a Mind Sludge, or scrapping and tossing elbows long enough to fracture the opponent's future with a Haunting Echoes.

We hadn't yet played one game with Zendikar, and BDM had already started to figure out the riddle of landfall (it probably came from previously figuring out the riddle of cascade). Cascade cards are for the most part not very good on their own. A Enlisted Wurm. Is it Keiga, the Tide Star? Bituminous Blast is not quite Prophetic Bolt. For that matter, Bloodbraid Elf is not quite Talruum Minotaur!

Cascade cards start getting exciting when there are lots of them, all firing at the same time. You know, the whole "Play a 5/4, play a 5/5, blow up your guy, gain four life, blow up your hand." The veritable cascade lottery!

Landfall cards are actually much better (it seems) on their own. They either generate desirable effects themselves (like Ob Nixilis, the Fallen) or accomplish passive cost savings (like Khalni Heart Expedition). Or they are unreal good (like Lotus Cobra). 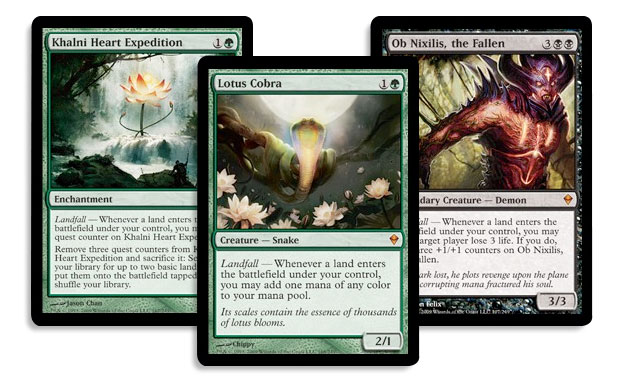 Now imagine you have some effect that gives you the ability, for

, to search up and then play two lands, run out a 2/1 haste, then engorge your legendary Demon (while simultaneously scraping at the opponent for 3). I don't know if you would actually normally use a card for any of those effects (the two lands, maybe), but the beauty of this mechanic is that you don't have to. You just play your land for the turn, and it's like you're winning the landfall lottery. Any of the effects seems great considering they are all essentially free, but when you play lots of cards with these eight letters proudly emblazoned on the text box, you get lots of simultaneous, incremental, and generally valuable, effects.

Don't Forget to Play a Bunch of Blightnings 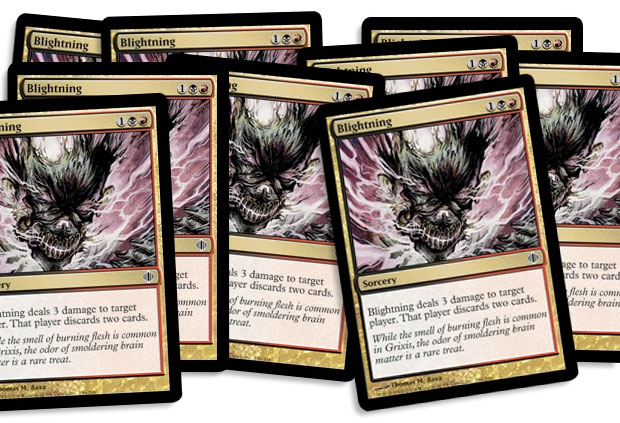 When it becomes obvious that opponents are lacing together lots and lots of seemingly disparate cards into an interlocking LEGO Hagrid of stupefying synergy, honestly you should try to un-stick some of those LEGO pieces, lest you be swept away in a swath of, you know, LEGO Hagrid's beard (or card advantage). We have it on good authority that two-for-ones are good, and separately, that drawing two (or even better, three!) Blightnings can turn the opponent's deck decisions to jelly. My recommendation? Cast Blightning early. Cast Blightning often. Snicker and wink when they start complaining about how often.

Lotus Cobra, after all, makes everything look powerful and synergistic, ultimately easy.