A Mana Saved is a Mana Earned

any of you probably know about this card Flash. Or at least you have heard about the card Flash in the context of what can only be considered the finest, most powerful, and most perfectly tuned (main) deck in the history of competitive Magic ... Hulk Flash, as envisioned by Billy Moreno and executed by Limited Information columnist Steve Sadin (making his brief but brilliant foray into the shoes of a Constructed Grand Prix champion).

Sadin's starting 60 represented, in most commentators' opinions, the best deck ever actually brought to a tournament. Hulk Flash (that is, this Hulk Flash without a specific metagame context) may not have been the best deck ever in terms of abstract power or consistency (it would pale in comparison to 20 Black Lotuses, 20 Channels, and 20 Fireballs for instance), but in terms of a deck actually built to be played in a specific tournament, it was pretty much better than any other strategy. The deck played a Counterbalance / Sensei's Divining Top one-two punch that could stifle opposing players' forward movement; like Remy Fortier's subsequent Extended Pro Tour–winning deck, it doubled up Divining Top shenanigans with Dark Confidant, essentially erasing the Great One's downside. But of course the combination that made the deck worthy of the name came from Protean Hulk + Flash. 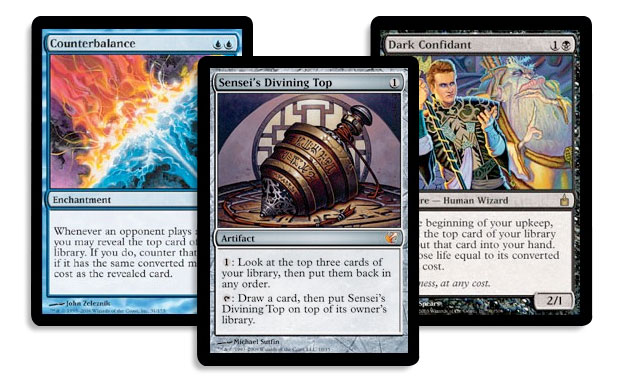 Flash allowed Sadin to lay down Protean Hulk for

... and because of how power-level errata was rolled back during the short window immediately before Grand Prix–Columbus 2007, Protean Hulk would immediately disappear from the battlefield, triggering its ability to set up Karmic Guide and Carrion Feeder; the Guide would return Protean Hulk to the battlefield, which would then be sacrificed to Carrion Feeder; it would trigger again, this time searching up Kiki-Jiki, Mirror Breaker, which would double up Karmic Guide; in response Carrion Feeder would, you know, feed upon the Mirror-Breaker (so it could be dug up by the impending Karmic Guide duplicate). This would go on and on until there were enough hasty Karmic Guides to end the game. 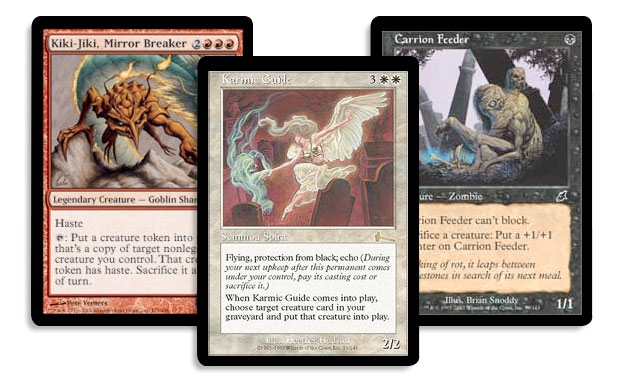 All those controlling combinations and a first-turn kill? I told you it was the best deck of all time!

So you might have heard of this card Flash.

Before Hulk Flash, the controversial card was used during a narrow window to put Academy Rectors into play, which would have much the same effect as Protean Hulks, but searching for Yawgmoth's Bargains rather than Mirror-Breakers and Karmic Guides.

But did you know that there was a fair spell when it was actually used as a "fair" spell?

And the thing is, it was great in that context too ... just not as famous (for obvious reasons).

1999 U.S. Nationals Top 8 competitor Christopher Tobler (who would be dubbed "Flash guy" for his early adoption of the card, and its use in executing mage after mage) included it in his infinite Sapphire Medallion deck. In this deck—beyond the applications against other blue mages we will talk about in a minute—Tobler's Flashes allowed him to drop threats at the end of a combo player's turn so that he wouldn't have to tap down on his own turn.

4 Whispers of the Muse

Flash was a deadly instant, typically played out of Accelerated Blue sideboards for the ferocious attrition wars of the blue-on-blue matchup. That mirror was often about getting into a position to resolve Morphling; you could play Flash during the opponent's end step with three or four mana open and rub your hands together like a greedy fly. Would it be a bluff? If the opponent didn't Counterspell your Flash, you could (potentially) run Morphling onto the battlefield ... and in a blue-on-blue battle in those days (about ten years ago), a resolved Morphling in that spot was ultimately as "game over" as Sadin's first-turn Protean Hulk or the mythical Yawgmoth's Bargain shenanigans, even if it took five turns.

Flash—beyond its more prominent inclusion in combo decks various—was an interesting and still quite powerful card. It was a test spell. It was an enabler. It was the first in an impending series of falling dominoes that tapped down the opponent's lands for a mere

; and when it was fair, it was fair to the point of lost card advantage.

You see, Flash opened a door. It allowed you—or at least blue mages of the late 1990s—to do something that they couldn't normally do. It did not grant this superpower for free, however; you had to pay a card (specifically the Flash itself) for the honor of being able to stick the Morphling or whatever you had in hand (you still had to have and use that card, too). Flash gave you a down payment, but not really a break on total mana. You had to be careful when casting Flash. Cast it at five mana (2+3), and you might expose your newly crafted Morphling ... It didn't give you a discount, exactly, it just gave you exactly what you wanted (even at an additional cost), that being your killer threat on the battlefield. When Flash stuck, it allowed you to combo off, in context, while avoiding that sickening combo deck feeling because Flashwas inherently a combination card ... It didn't do anything if you didn't have the right pair in your hand.

Compare that to Summoning Trap. 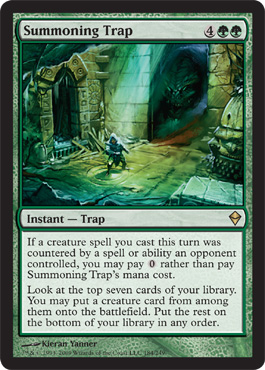 Before we get into the hilarity of the zero-mana variety, let's speak just about Summoning Trap as a Flash analogue. Green instead of blue, yes; six instead of "two," yes .... But not really, and not really. If there is one thing that we have learned from the past couple of years of Vivid Creeks and Savage Lands, and now with Misty Rainforests leading the charge, we've learned that specific colors are not as prohibitive as they once were; our control decks are routinely capable of producing

for just a moment. This card costs six ... but Flash never really cost

(except when we didn't intend to pay the balance of the cost, in combo decks, that is!).

So as a test spell, an "I'm doing something at the end of your turn, do you have anything to say about it?" type card, Summoning Trap has some potent things going for it. If the opponent doesn't Counterspell, you are likely to have out a threat—and if you build your deck with Summoning Trap in mind—a pretty significant one. As a point of reference, one of those Jund Mana Ramp decks that has four Cloudthreshers and four Broodmate Dragons, and, say, one Karrthus, Tyrant of Jund in from the sideboard has a "gigundus threat percentage" of almost 12%. If you cast Summoning Trap at the end of your opponent's sixth turn (let's say you have 53 cards in your deck because of a Rampant Growth), you will see just north of 10% of your deck. Of course, you will have to discount the numbers based on how many gigundus threats you have already drawn, but most of the time, you will be breaking even or profiting on mana; that is, you will be getting a six- or seven-mana value for your six-mana spell ... but with the added bonus of that spell being at instant speed, which is obviously a tremendous boon if you are intending to flip over a Broodmate Dragon (less so when we consider a Cloudthresher, which inherently has flash ... but of course the example was merely illustrative, as Cloudthresher will rotate from Standard as Summoning Trap becomes legal). 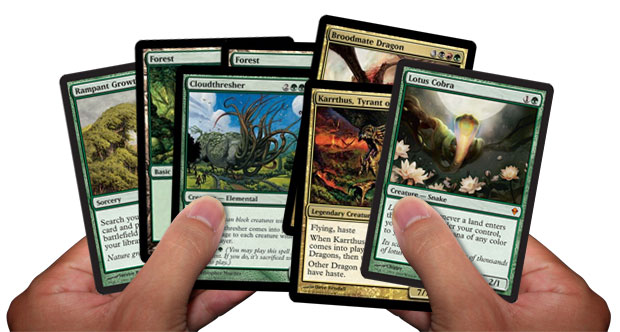 It requires more of a down payment than fair Flash did ... but you don't need another card in hand to make it great. For example you can get your hand blown up by Mind Shatter or Identity Crisis, rip Summoning Trap, and have something that can actually hook a brother up.

But like Flash, Summoning Trap has its unfair mode, too!

Imagine you applied the same "I have eight or nine ridiculous creatures" schema to another turn ... Say turn two.

Oh thank you, Karona, the False God, says your opponent, tapping for

I think Summoning Trap is interesting as a main-deck card; the notion of what it can do in terms of saving mana (adding functionality to six-mana creatures) or tapping mana is significant. However the real excitement of this card comes as a devastating sideboard card against essentially any deck that is liable to Counterspell a creature, especially early. Creature-rich decks can cast Summoning Trap without fear (they will usually hit something), but the really awesome results will come from being able to generate a huge mana advantage against the opponent. Casting a two-drop and being rewarded with a six-drop is just too luscious for words. 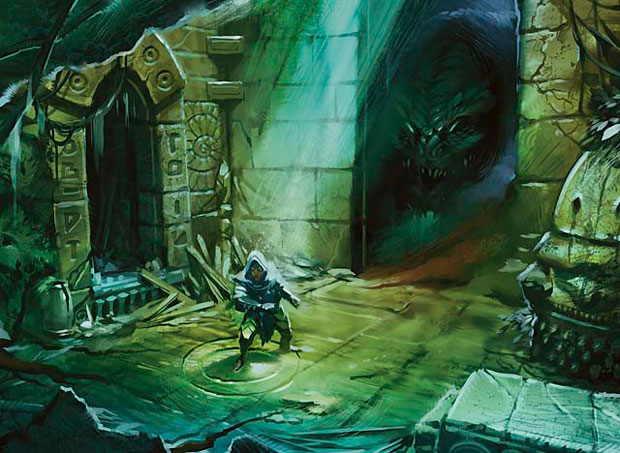 The card is still probably just fine with a low curve in Extended (your Tarmogoyf falls to Spell Snare ... Oh well, ho hum, here is Ranger of Eos ... Go and get two Wild Nacatls. Even just a Wild Nacatl is a threat plus relative savings), but I feel like certain Standard decks that have a variety of different mana costs and threat types—especially those that top up on tremendous game-swinging threats like Broodmate Dragon or Baneslayer Angel (in the context of more, cheaper, especially very cheap, creatures) are the ones that are going to make Summoning Trap the best Trap to come out of Zendikar!

I haven't seen all the Traps yet, but as much as I like the half-Wildfire test spell that is Lavaball Trap, and as conditionally rock-and-roll as Mindbreak Trap can be (sorry, Great Sable Stag), none of the others—at least none of those I have seen so far—combine the proactive necessity of this Trap with its sheer speed.

That's my story, and I'm sticking to it.

Enjoy the Prerelease this weekend!