orld Magic Cup Qualifiers various have been raging in cities around the globe, off and on, for months now. Top performing players in the various WMCQs will have the chance to represent their parent nations in the upcoming World Magic Cup . Although more-or-less open events, many players consider their WMCQs as a stand-in for their National Championships and approach them with a similar level of severity; here in the United States, it is not unheard of for strong players or even Hall of Famers to fly from one end of the country to the other to try their hands at a WMCQ. Players at all levels can appreciate the performing builds, adopt them for FNM or other Standard tournaments, or use them as starting points to their own further explorations. 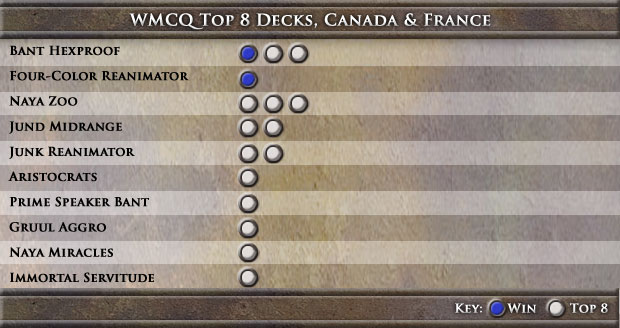 Bant Hexproof is a deck that does what it sounds like: its colors are green-white-blue (the "Bant" trio from Shards of Alara) and it plays (among other creatures) a hexproof eight-pack of Invisible Stalker and Geist of Saint Traft. Those eight hexproof creatures tend to be set in stone, with Invisible Stalker being the best option against most decks capable of blocking, and Geist of Saint Traft going from "arguably the strongest offensive creature in Standard" to "completely bonkers" when paired with a card like Spectral Flight; Avacyn's Pilgrim can give the deck some speed (setting up, say, a second-turn Geist of Saint Traft) with most decks choosing between Fencing Ace or Loxodon Smiter as the next level of offense.

Bant Hexproof plays nearly as many offensive Auras as it does creatures themselves. Hard-to-stop threats like Invisible Stalker can give this aggro deck a very "combo" feeling of non-interactivity; evasion in the form of flying or trampling makes an already hard-to-stop Geist of Saint Traft even harder, even for decks that can typically put a stop sign in front of a 2/2 creature; Fencing Ace can potentially kill the opponent on the third turn when suited up with a lucky trio of Ethereal Armors.

Bant Hexproof was a rogue strategy that rose to a reasonable level of popularity culminating in a Grand Prix finals mirror match back in Atlantic City in January; that was before Gatecrash and before Dragon's Maze.

Recent sets gave the deck tools: first Gift of Orzhova in Gatecrash, recently upgraded to Unflinching Courage via Dragon's Maze. Unflinching Courage, Rancor, and Spectral Flight are all awesome ways to enhance your creatures; and what Ethereal Armor may lack in single-card efficiency, it is undeniably unbelievable in the context of playing with lots of enchantments (which this deck does). The other notable addition from Dragon's Maze is Voice of Resurgence; Voice has grown up to be essentially a go-to four-of here. If Bant Hexproof has a weakness it is getting its creatures all killed (ergo, no target for all those enchantments) and the extra bodies afforded by this new two-drop therefore help the deck keep going even in the face of relevant removal resistance.


P. played a mix of Fencing Aces and Loxodon Smiters; it is notable that either of these creatures hits approximately as hard as the other when geared up with a single Rancor, Spectral Flight, or Unflinching Courage; Fencing Ace is the more explosive but Loxodon Smiter is an aces defender against Naya or Gruul Aggro decks.

In addition to Voice of Resurgence, P. ran a solo Strangleroot Geist in his main deck as another super-removal-resilient two-drop.

Fog is a sideboard card that has been gaining some traction in Bant Hexproof circles (generally taking the place of former sideboard card Feeling of Dread). In addition to its function blunting a Blitz-style offense, Fog can take a turn—especially a really mana-committed turn—away from another Bant Hexproof deck, denying the opponent not only an all-in attack but perhaps the lifelink from an Unflinching Courage or Nearheath Pilgrim.


The Marseilles WMCQ actually saw a Bant Hexproof mirror match in the finals, with F. falling to P. in a duel of Geists and Auras. F. played a more streamlined deck with mostly four-ofs. Rather than any Fencing Aces, F. played three Strangleroot Geists main (with a fourth in the sideboard).

An important addition to this strategy in recent weeks has been Rootborn Defenses. One of the cards that Bant Hexproof is somewhat soft to is Supreme Verdict. Many of its key threats—Invisible Stalker, Geist of Saint Traft—can't be targeted but can be swept; unfortunately, Supreme Verdict can't be stopped by any kind of permission spells but can kind of be "countered" by a Rootborn Defenses; there is sometimes an additional tokens bonus when Voice of Resurgence has already spawned an Elemental.


B. pushed two of these hexproof-versus-removal themes even further with his use of Wolfir Avenger main (follow up an opponent tapping for Supreme Verdict with a flash 3/3 and/or regenerate from a sweeper) and Advent of the Wurm in the sideboard. Advent of the Wurm has tokens synergy with Rootborn Defenses, as does Selesnya Charm.


If you haven't seen this strategy yet...this deck is sweet.

Eschewing many of the regular old midrange elements of Junk Reanimator, Four-Color Reanimator swings only for the fences. Absolutely nothing but boom booms in this deck.

Instead of just going for a regular old threat, this one can go Cavern of Souls + Sire of Insanity to ensure an uncounterable Mind Twist on legs against control. Did you foolishly tap for an Augur of Bolas or Farseek? Four-Color Reanimator can turbo out a Sire with Unburial Rites flashback.

That Cavern of Souls works hard in this deck... it can go Angel of Serenity loop with two or more Angels to create a long-game hell situation for removal-based control defense (the Cavern making the Angel loop impossible to stop with Dissipate over the course of seven or more turns).

But the super special side is Boros Reckoner. Boros Reckoner is Standard's finest stop sign for Blitz decks (one of the notable foils to Reanimator). In addition to keeping the odd Lightning Mauler off your back, Boros Reckoner is a mad combo enabler in this deck. Mulch and Grisly Salvage are already filling up your graveyard... providing plenty of fuel here for the Harvest Pyre combo kill.

Red-green-white (the "Naya" colors from Shards of Alara) previously represented the fastest offensive shard in Standard with Naya Blitz... all battalion and bloodrush and the odd Giant Growth. Games could de facto end on the second turn if the opponent hit too many Burning-Tree Emissarys, with mad Champion of the Parish buffs or turning on all the 3/3 Boros Elites.

However, recent trends have slowed Naya down.

The performing Naya decks from these WMCQs have taken their cues from recent Grand Prix or the continuing social media work of one Tomoharu Saito, going with Loxodon Smiters (at least in part to slow down opposing rush decks) and Domri Rade at the three; both often come down on the second turn via Avacyn's Pilgrim.

Today's Naya Zoo decks are a proud promenade of creature quality... Voice of Resurgence, Boros Reckoner, Restoration Angel... all the hits; they tend to finish super strong and essentially unstoppable with Thundermaw Hellkite as the big finisher. Although they tend to play Huntmaster of the Fells (and Huntmaster of the Fells + Restoration Angel), their devotion to Thundermaw Hellkite at the five has largely squeezed Thragtusk out of the curve.

3 Restoration Angel 4 Huntmaster of the Fells


One of the nudge-nudge-wink-winks of the current Naya deck is that, even though it has a green one-drop and can accommodate a

five out of the sideboard, all its lands can somehow tap for a Boros Reckoner. Pierre, though, winked back with one Gavony Township.

He played a mix of interactive cards. In addition to Mizzium Mortars, Selesnya Charm gives this deck some Angel of Serenity and/or Olivia Voldaren defense.

3 Huntmaster of the Fells 3 Restoration Angel


E. mixed up his Naya Zoo a bit, cutting a Huntmaster, Resto, or Smiter four-of to accommodate two copies of Flinthoof Boar, speeding up the deck a bit.

Assemble the Legion out of the sideboard gives E.'s build a hard-to-answer boom boom that rips through removal and challenges even the most (especially the most?) focused Renounce the Guilds.

It is important to note that even though some of these Naya decks are going for a bit of additional speed in their more midrange takes, not a one is opting for the explosiveness (but smaller bodies) of a Burning-Tree Emissary.

The favorite of top players like Owen Turtenwald and Reid Duke, Jund Midrange (named for the black-red-green shard [of Alara]) takes on all comers and fields a powerful combination of some of the strongest threats and answers in the format.

4 Huntmaster of the Fells 4 Olivia Voldaren 2 Rakdos's Return 2 Bonfire of the Damned 3 Liliana of the Veil 2 Garruk, Primal Hunter 2 Vraska the Unseen
75 Cards


D. started on Arbor Elf for some turn-one acceleration and can hit second-turn Liliana of the Veil or Vampire Nighthawk. D.'s build can produce a hell of lifegain... Vampire Nighthawk, Huntmaster of the Fells, all the way to Thragtusk. This version plays many powerful midgame and late-game routes to taking over the board, from Olivia Voldaren to Gaze of Granite to emptying the opponent's hand with Rakdos's Return.

Although D. played Sire of Insanity in his sideboard only, it is joined by Slaughter Games for some additional anti-control.


Blondon played the control-crushing Cavern of Souls + Sire of Insanity combo main. In addition to a wide variety of removal spells (up to and including the Invisible Stalker-eating Curse of Death's Hold on five, out of the sideboard), Blondon could side up to the full four copies of Vampire Nighthawk, making for a real lifegain disaster for aggressive decks.

At the same time Garruk, Primal Hunter and Deadbridge Chant give this build a tremendous level of staying power.

Junk Reanimator remains one of the most popular strategies in Standard. It mixes progressive midrange capability with a combo-esque Mulch/Unburial Rites game. Essentially, Junk Reanimator can go bigger than most other midrange decks with Angel of Serenity, but Unburial Rites allows it to set up faster than those competitors by under-paying for cards like Thragtusk (or frustrating attackers by turning one Thragtusk into three).


Timothee's main deck had Voice of Resurgence to set up early blocking as well as Fiend Hunter and Acidic Slime for enters-the-battlefield defensive action. Acidic Slime in particular punishes greedy mana bases and can combine nicely with Restoration Angel or Unburial Rites. Timothee's sideboard allows for a transformation with Somberwald Sage into a turbo–Craterhoof Behemoth combo deck.


B. went big with his Aristocrats deck, adding three copies of Obzedat, Ghost Council to the aggressive, White Weenie-esque strategy.

The Aristocrats is basically always attacking, never gives the opponent triggers, and fields a super high level of quality between Boros Reckoner, Lingering Souls, Falkenrath Aristocrat, and so on.

From the first time Farseek laid eyes on Thragtusk and Angel of Serenity, they all decided they wanted to make a big, happy (did I mention "big") family of ramping and expensive spells. Thragtusk and Restoration Angel made a little 3/3 achievement together. Selesnya Charm could defend all these big guys from Olivia Voldaren (what's the point of making awesome big guys if some vampire queen was just going to steal them?). Sphinx's Revelation? That's big, too!