t's no secret that Izzet is among the most popular of guilds to align with. While I'll never fathom why so many choose something other than the swift, fiery justice of the Boros, my duty is to adhere to the vision so many of you want to realize: a Commander deck led by the fashionably odd Melek, Izzet Paragon. 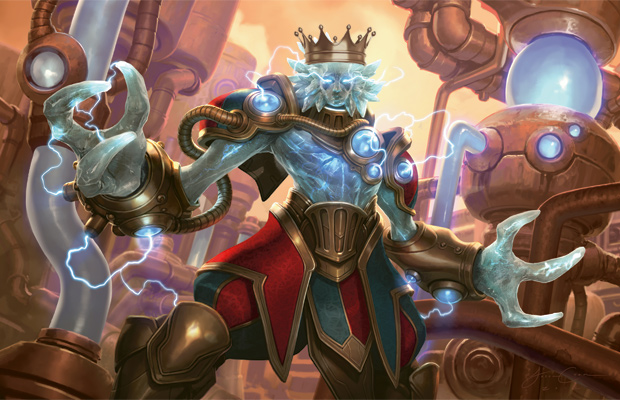 Based on the feedback of the cards you were most excited to see in Dragon's Maze, following up on Izzet didn't take genius intellect to determine. The theme of the deck, as gravitated to by most of you, was packing in plenty of instant and sorcery spells to key off of Melek. Unsurprisingly, one of the most suggested cards was Possibility Storm, another card regarded well by you look at the whole set.

But crafting an entire Commander deck takes more than just a primordial idea and particular legendary creature. (And, speaking of legendary, last week's rules update announcement that bumped us out a week is important to keep in mind for today's article since we'll be including ways to copy permanents, and the handling multiples of legendary permanents in play will be changing soon!) It takes plenty of cards and play to make the most of the ninety-nine-high stack we take with us.

This is what you brewed up six cards at a time.

What makes Melek, Izzet Paragon tick? It's all about his text box:

Getting the most excitement out of Melek asks us to do a few things:

We'll get to all of these, thanks to your submissions. The first set is from Eamon, who cuts right to the first point:

Eamon's pick of Serum Visions is just one of several cards that can manipulate the top of the library, where the spells Melek cares about have to sit. Brainstorm and Mystic Speculation do a fine job of this too. Setting up an instant or sorcery on top is something Melek appreciates.

Where things get interesting is with Increasing Vengeance, which, if Melek lets you cast from the top, effectively doubles up similarly as when you use flashback for it, as well as Spelltwine, which is amazing to cast twice in one shot since you don't get a second. Both of these spells let us get more from the spells we'll end up leaving in our graveyard, but both are fantastic to have sitting on top of the library, particular in conjunction with one of Kevin's choices:

Leyline of Anticipation, and its artifact ancestor Vedalken Orrery, lets you cast sorceries (and just about everything else) anytime. Given there are so many powerful sorceries that can really mess with opponents if they were instant, such as Blatant Thievery and Reality Strobe, turning things on faster just makes sense. Kevin's other choices both round out ways to put an instant or sorcery on top of our library (Scroll Rack) or function as another way to double up on awesome things we cast (Djinn Illuminatus).

While we haven't gotten to many ways to make extra mana, Braid of Fire is one of those weird ways that requires a little thought. You have to use it during the upkeep, but if you have mana sinks and sorceries you can cast when you could cast an instant it works. We've also been light on spells you'd want to copy through Melek, and the two Scott chose here deliver. Comet Storm can slice and dice a battlefield, targeting creatures and players as you see fit, but Rite of Replication could potentially make ten copies of the same creature if cast kicked from the top of the library.

Solly had a few more spells to duplicate:

Index is an innocuous spell that turns Melek on for potentially several turns in a row, but it's Call the Skybreaker and Izzet Charm that steal the show here. Digging through for a better four cards is nice, and so is throwing a little damage around. Creating creatures through spells isn't as easy for blue and red, but Call the Skybreaker is an ideal option here. Getting two pseudo-Dragons if it's off the top and transforming any extra lands we draw into more is a sweet deal.

Possibility Storm is an interesting addition to the mix here. While it certainly affects everything players cast from their hands, Melek changes the equation for us. Possibly Storm doesn't care if we cast spells from the top of our library, but it will still work if we try from our hand. This means we get the best of both words: using spells in hand, we can get the spell on top of our library instead, ideally at a discount, or simply cast it from the top if it's an instant or sorcery, where we still have the option to cast a cheaper spell in hand for the one on top. It's mindboggling to even think about!

Janne went looking for ways to make all this instant and sorcery action easier:

Instead of copying, Aaron wants to get even more going:

Cards like Future Sight, Scroll Rack, and the wand help with top-deck management. Wand of Denial is a bit of a pet card of mine, so that is always in! Charmbreaker Devils recycles used sorceries and instants (to then be put back on the top of the library with Scroll Rack) and Galvanoth casts a free one once a turn!

Wand of Denial is a pretty crude way to get something off the top of your library, but Galvanoth is silly with Melek, since you're casting the spell from your library. Charmbreaker Devils's recursion is random, but happens every turn. If you want to pick and choose, cards like Izzet Chronarch and Archaeomancer are suitable as well, but they work only once.

In looking across the feedback, it's clear so many of you were looking for the same things it was scary. Consider John's and Mark's choices respectively:

Notice anything? More Copying, library fixing, with a little spicy extra turn and burn thrown in covers almost all of the feedback received. You all love your copying and libraries! If it feels like there's a few things missing, it's because Miles chose them all:

Miles's rundown is packed full of options that cover already-covered bases, but they do lay out the groundwork for mana with plenty of artifacts. Generating more mana quickly is important to casting a huge Comet Storm early enough to blast away enemies. It's the final piece we needed to build our Melek, Izzet Paragon deck.


Things Got a Little Weird

Doesn't this deck look... strange? In hindsight, throwing together just the top-of-mind suggestions from all of you has led us to fulfill our plan of having spells, playing them as we'd please, and making enough mana to do it, but our deck is lacking coordination and cohesion.

There's plenty of obvious things you might want to change here, but that's exactly the point I wanted to make: the best of intentions do not naturally lead to the best execution. That's where you come in. I'd like to get the community scope on making changes to decks. One of the most frequent questions I see come through, that isn't attached to the feedback of the week, is how to "improve" a deck.

Many of you love the commander and themes you've chosen, but struggle to connect things in a way that makes the deck "work." Starting with our deck here, one that clearly has some potential but doesn't seem to work as we intended, I want to know what your next steps would be. What simple changes would you make to this deck to improve it? (Alternatively, what's wrong with this deck and what would you do differently?)

Some of you could write an entire article about what to change with this deck. I'm asking you to choose one paragraph that belongs in it, then share that thought. It isn't the specific cards you'd change, but the rationale behind changing them. Feel free to use examples, but make sure it's applicable to this Melek deck. The goal here is to encapsulate the approaches we all take to refining a deck from its raw, primordial state to something much more dangerous for opponents.

Join us next week when we look at what lies beneath. See you then!