he Modern PTQ season is in full swing on Magic Online. Today, I'd like to look at the two most recent Magic Online Modern PTQs. By analyzing the best-performing decks in these events, we can have a better understanding of the format as a whole and give ourselves a fighting chance in the shark tank. 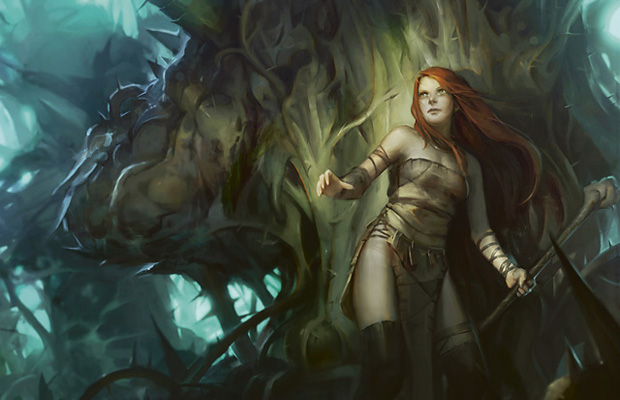 Let's begin by taking a look at the makeup of our Top 8s.

The January 14 PTQ was the second consecutive Magic Online PTQ won by Red-White-Blue Tempo. Splinter Twin continued to be the combo deck of choice. Jund remains a force to be reckoned with—its inexpensive disruption and Deathrite Shamans prevent players from trumping decks like Splinter Twin or Birthing Pod with faster combo strategies like Pyromancer Ascension. Let's take a look at the decklists.


Red-White-Blue Tempo has quickly established itself as a tier one deck in Modern. The deck performs reasonably well against Jund, especially when it gets a Geist of Saint Traft draw in the first game. The deck is capable of closing games very quickly, and a little help from Izzet Charm, Mana Leak, and Remand is usually enough to allow the deck to race against combo strategies. Spellskite is one of the stronger cards against this deck. For just two mana, you guarantee yourself a two-for-one or a huge mana investment from the opponent if he or she wants to use Electrolyze and another burn spell to deal with it. You can expect to see this deck in upcoming PTQs, but you can be prepared by bringing a reasonable number of Spellskites or some Volcanic Fallouts/Jund Charms.


Melira Pod was probably the best Modern deck last season. We've seen the deck reestablishing itself as tier one over the last few weeks and there's no doubt at this point that players have recognized its power in the current metagame. The deck wins by combining Melira, Sylvok Outcast with Viscera Seer and Murderous Redcap (for infinite damage) or Kitchen Finks (for infinite life). Persist creatures return to play without -1/-1 counters thanks to Melira, and they can be sacrificed repeatedly through Viscera Seer. The deck functions similarly to a midrange watered-down version of Jund through the early turns, but the constant threat of winning out of nowhere makes the deck difficult to tap out against after the fourth turn. 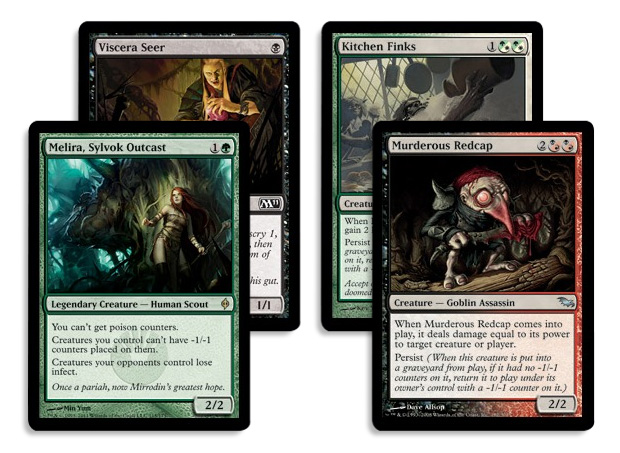 
The more controlling white-blue decks have had scattered success in this format. The deck performs well against most combo strategies, but it can often be run over by the most aggressive decks. The deck leans hard on its Vedalken Shackles in most creature matchups and the ability to reliably deal with Shackles will often make or break your game here. The deck is also fairly die-roll dependent against decks that aren't full of two-drops. I expect this deck to enjoy success in the future, but the deck needs the format to oscillate toward blue combo decks in the coming weeks for it to be at its maximum potential.


Kiki-Jiki, Mirror Breaker Pod has been a major player this Modern season, especially on Magic Online. The deck is extraordinarily difficult to play, giving its pilot a ton of options every turn. The deck struggles against many of the format's other combo decks but excels in all other matchups. Kiki-Jiki, Mirror Breaker Pod is hard to test against because the deck's power level is often linked to the skill level and experience of the pilot. I've witnessed a number of strong players pilot the deck very differently to great success. It's often not worthwhile to sideboard in artifact removal unless your deck is full of Lightning Helixes and Lightning Bolts and you intend on destroying the Birthing Pods and the Spellskites in order to achieve victory. The above list only has a single copy of Spellskite, but it's not unusual for the deck to have two or three copies. Be sure to play around Chord of Calling if possible when battling against this deck; the card can grab Harmonic Sliver or Spellskite at instant speed to disrupt a combo or get rid of a key card.


Spirit Jund has been the deck to beat in Modern since Grand Prix Chicago in November. The deck doesn't have any truly bad matchups. The combination of inexpensive disruption with card advantage and a strong clock is going to be difficult for any deck to keep up with. Most Jund lists only have two or three cards that can target and kill a large creature like Baneslayer Angel or Thundermaw Hellkite, making large fliers one of the best plans against Jund, especially in Game 1. Keep an eye out for Haumph's latest Jund list in upcoming Daily and Premier Events. Haumph's latest Jund list seems to be adopted by a lot of Magic Online ringers within a day or two of its printing and it's safe to say this player is the current Jund master of Magic Online.


Splinter Twin combo has been the combo deck to beat in Modern since the beginning of the season. The deck wins by using Splinter Twin or Kiki-Jiki, Mirror Breaker with Pestermite or Deceiver Exarch to create an arbitrarily large number of creatures and attack for thousands of damage. The deck performs reasonably well against Jund and its latest incarnations are well positioned against most control variants as well. The deck suffers against the latest red-white-blue tempo decks, despite the presence of Spellskite, but there really isn't a good way for the deck to combat efficient countermagic other than its own cheap countermagic. 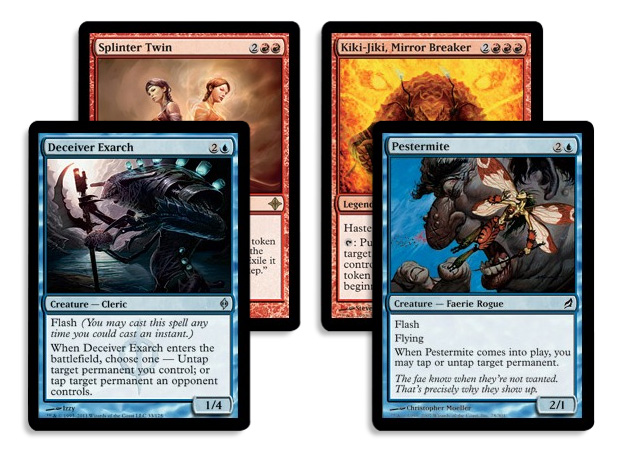 
Blue-Red-Green Delver of Secrets was the most feared deck in Modern coming into the 2012 Player's Championship. Since then, the deck's popularity has waned. The deck has had a bit of a resurgence in the last few weeks thanks to the incredible positioning of Vedalken Shackles and the deck's strength in most combo matchups. This deck is eerily similar to the once-best deck of Legacy and I don't think it would be wise to count this one out.


From time to time, we see someone take the two strongest decks in a given format and smash them together, just to see what happens. _GMac_ decided to fuse Jund and Splinter Twin and it almost won _GMac_ a trip to the Pro Tour. This deck is difficult for me to evaluate on the fly, but I'm guessing it's an absolute nightmare to play against if you don't know what's happening. I wouldn't be afraid to tap out to an opponent who had cast Tarmogoyf and Deathrite Shaman, but I would probably find myself facing down 10,000 Pestermites the following turn.

Almost exactly a week later, Magic Online hosted another Modern PTQ. Another week of format evolution establish Melira Pod, one of the best decks from last Modern season, as the combo deck to beat. Jund's presence was, once again, a huge factor that pushed the rest of the metagame to evolve around it. Burn managed to make another Top 8 as players began removing Leyline of Sanctity from their sideboards. Let's take a look at the decklists.


Melira Pod went from being a blast from the past to being the deck to beat in under a week. I expect this deck to do tremendously well in live events this coming weekend. I'd recommend building this deck to test with and against if you're looking to pick up an invite in the coming weeks.


Haumph is at it again, this time making it all the way to the finals with his Jund deck. It looks like Haumph cut an Abrupt Decay in favor of an extra Terminate to help combat cards like Thundermaw Hellkite and Baneslayer Angel, especially in Game 1s. I would use this Spirit Jund list for testing purposes this week; it's likely more up to date than the new lists you'll find tomorrow.

2 Dark Confidant 4 Bump in the Night