have spent the majority of my career in Magic, both as a player and as a commentator, more in the "stand out" camp rather than the "blend in" one. I have never summoned a Mistbind Clique, for example, and once Savage Lands became popular, I considered myself too cool for them despite being an early adopter. In a greater sense, I have mostly used this column to celebrate the diversity of decks and strategies that people can play—and that players have been successful with, in real tournaments—and shared them with you, especially as we have progressed through the dangerous (and frequently shifting) waters of Constructed Magic metagames.

But for today, and across a couple of different formats, I am tickled and I suppose delighted to present an argument made by my good friend Joshua Ravitz after a recent near-miss:

"It's probably just wrong to not play Stoneforge Mystic." 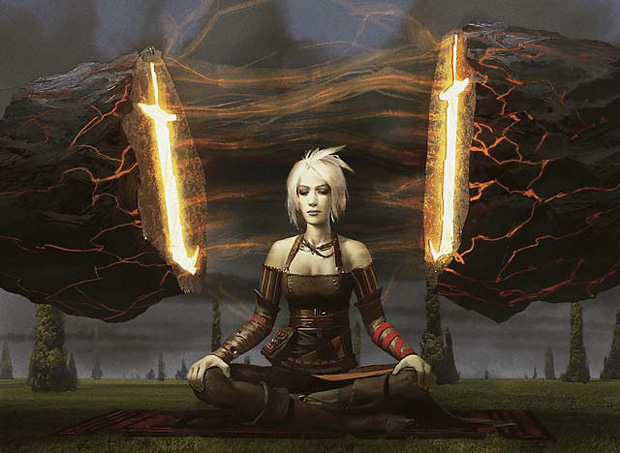 At the New York PTQ a few weeks ago, Josh battled to a near–Top 8 with Patrick Chapin's Four-Color Control deck. He switched to a Stoneforge Mystic deck for last weekend's PTQ in Philadelphia, PA.

You can play a couple of different kinds of Stoneforge Mystic decks. The little white two-drop has been making a strong case for itself as the finest creature in Standard, and the cross-format appeal with Bant, Naya, straight White-Blue, and a number of other strategies we have talked about in this column have all been compelling.

A few Luis Scott-Vargas tweaks later and he was the proud owner of a shiny Blue Envelope.

"And with a first-round loss, too!"

The West deck is different from many of the white-blue Extended decks we have looked at previously. The new inclusions—or old inclusions?—are Spellstutter Sprite and Vendilion Clique.

Spellstutter Sprite, forgotten favorite of legitimate Faeries decks, takes the place of Squadron Hawk in this deck. The cards are quite similar of course: both 1/1 flyers for two mana, both theoretically sources of card advantage. Squadron Hawk is perhaps Magic's premier un-mulligan-er. Spellstutter Sprite—especially with so few players thinking about the card in the context of a White-Blue Sword deck—has potential surprise value... and gets to gobble up a bit of the opponent's mana. Most of Josh's Spellstutter Sprites stopped the Thoughtseizes that would have turned his key-card-driven opening hands to mush, and got somebody's Stoneforge Mystic along the way.

The best loot for Stuttering Sprite, though, was back-to-back Qasali Pridemages out of a Naya opponent. For all their elegance when running hot, absent their Equipment, the Caw-Blade family starts to look like an underpowered dimwit cousin of a "real" white-blue deck. Best keep those exalted kitty cats off the battlefield! Playing against a deck like Boros, countering "only" a Goblin Guide or Lightning Bolt can easily be the difference between winning a close one and being completely blown out. So, though Spellstutter Sprite lacks Squadron Hawk's initial tonnage of card advantage, its tempo burglary and ability to trade up in the world make it quite an interesting—if not universally compelling—option in this kind of deck.

But of all these cards—Mister "Jace, the Mind Sculptor" included—Josh picked Gideon Jura as his best spell on the day.

"Gideon adds another dimension to the deck. It's like a Chimeric Mass sometimes, like a Solitary Confinement sometimes... and Gideon wields a Sword of Feast and Famine quite well."

Speaking of Caw-Blade, as we move back to Standard (with precious few Extended PTQs left on the schedule), Edgar Flores took down the most recent StarCityGames.com Open Series event... with Caw-Blade. This other Flores has been a monster across Star City's almost-weekly tournament series, racking up a number of Top 8 finishes... though this is his first win.

What bears mentioning is that Flores played a straight White-Blue Caw-Blade deck, with no black or red splashes. Despite not leaving the mother colors, Edgar's deck has a number of customizations...

In addition to some Divine Offering action, Edgar played multiple Volition Reins as flexible answers. They can take your best creature... or a Sword of your own!

The big question that a lot of the games most recognizable thinkers had coming into the Star City event in Atlanta was how many Caw-Blade decks would make the Top 8. This was especially interesting given last week's Grand Prix Barcelona results, where Black-Blue and Liliana Vess were so surprisingly unbeatable.

When the dust cleared, Flores had won a Top 8 featuring five Caw-Blade decks, between two straight white-blue versions and three black-splashing decks, including the one played by third-place finisher (and multiple Pro Tour and National Champion) Charles Gindy:

2 Go for the Throat 3 Duress 4 Inquisition of Kozilek

Gindy's White-Blue-Black Caw-Blade is a bit less black than some of the others we have discussed. His color expansion is for just two copies of Go for the Throat main deck, along with a fair amount of discard (Duress and Inquisition of Kozilek), and of course Gindy gets the premiere Jace-killing land in Creeping Tar Pit.

It is probably fair to say that the black-splashing white-blue decks are more focused on beating other control, whereas straight white-blue is more of a "take on all comers" strategy. To wit, Gindy's black splash dips into a fifth Jace (Jace Beleren) and adds discard (which is arguably worthwhile for other areas). Meanwhile, the cut cards are the ones we identify the most with anti-beatdown: Day of Judgment and what have you. Gindy's deck played only one copy of Day of Judgment, versus three in Edgar's. 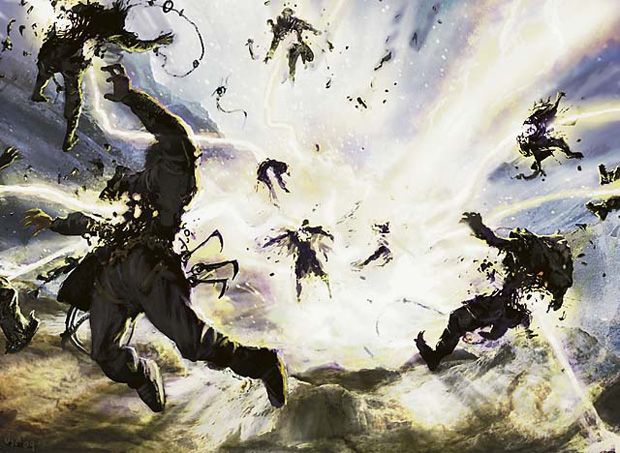 But they are still Caw-Blade decks!

Not so, David Sharfman:

What Sharman brought to the Top 8 was just a regular old White-Blue Control deck! I don't know that we have seen a notable finish by one since the origin of Caw-Blade back around Pro Tour Paris.

Caw-Blade decks are defined by the power of their two-drop creatures. The "Caw" comes from Squadron Hawk, which is generally thought to be an upgrade over Wall of Omens. The "Blade" part comes from Stoneforge Mystic, a creature—given the printing of Sword of Feast and Famine—so powerful that a reasonable player might joke that there is a "you have to play Stoneforge Mystic" rule hanging over the metagame (Standard or Extended).

Though it doesn't play either Squadron Hawk or Stoneforge Mystic, similar principles and desires can be seen throughout a regular white-blue deck. Sea Gate Oracle and Wall of Omens are two-for-ones... and it's great to see Spreading Seas back in April. These cards help dig through Sharfman's deck, kind of shortening it. Though he only has two copies of Day of Judgment main deck, David's ability to peek and dig through his deck allows him to pretend there is kind of a third copy.

Sun Titan—a card that can actually go over the top of Caw-Blade—is great here as a tool that can go and get back any of the two or three mana cantrip permanents. Chump-block with Sea Gate Oracle, get it back with Sun Titan... etc. Sun Titan can do the same for the deck's core artifacts (Contagion Clasp and Tumble Magnet), or Jace Beleren (which can help the deck become an annoying powerhouse... especially when playing a sub-game around the power of either Jace.

So what is particular here?

The artifacts give Sharfman's deck a particular layer of power and expertise. Contagion Clasp, that Lotus Cobra murderer, can make Tumble Magnet a permanent solution and power up planeswalkers going long. The funnest is some combination of Contagion Clasp, the ever-increasing Everflowing Chalice... and anything else. The deck starts to be able to make bigger and bigger mana, and do more and more from an operational standpoint.

With all the cantrip-type cards in this deck (everything from Spreading Seas and Wall of Omens to arguably Sun Titan), Sharfman's deck has quite a bit of "enters the battlefield" action going for it. You know who loves an "enters the battlefield" ability? Venser, Shaper Savant. Once that planeswalker hits the 'field, he can essentially play Jayemdae Tome (or personal Howling Mine) while ever increasing in loyalty.

Noticeably absent, especially given all the other search, draw, and dig? Preordain.

So there you have it.

Opposite day, kind of.

If you are gearing up for a big tournament and you aren't sure which direction to go, if you can't choose between the many disparate directions and powerful options of a constantly moving—and improving—metagame, might I suggest a Celestial Colonnade? Heck, you've still got plenty of options!