his weekend, we'll have our first opportunity to play Modern Pro Tour Qualifiers. Modern is one of the most exciting PTQ seasons. Given the current state of the format, it seems as if we may see completely different archetypes enjoying success from week to week. Today, we'll be taking a look at the most successful Modern decks from the last week's Magic Online events. 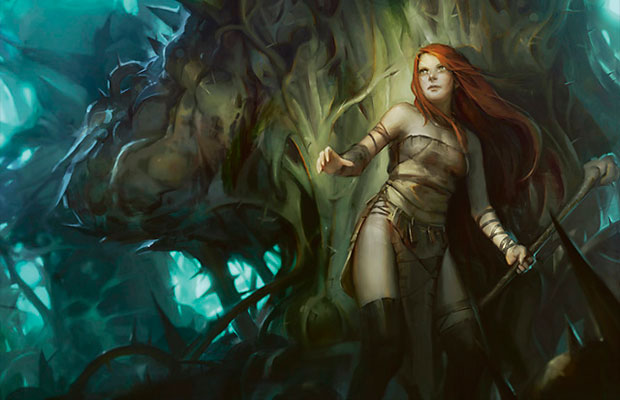 Aggressive decks have taken a new shape in Modern. Affinity remains the most popular of the aggro strategies, but aggressive blue-red Delver of Secrets strategies are quickly building a large following.

Combo remains strong. Scapeshift has catapulted to the top of the metagame since its Grand Prix victory. Splinter Twin strategies have also retained a large following. Melira Pod is still the most successful version of the Pod strategies, and the deck's win percentage is still incredible by all accounts. Green Tron decks have excellent matchups against the non-combo decks, but the deck's weakness to true combo strategies makes it a risky choice.

Control strategies have taken new shape. Red-White-Blue Control decks haven't been performing well. Jund has experienced a resurgence in an environment rich with Pod and Affinity. Discard spells in general seem quite strong these days, and the current lack of Spell Snares in the format encourage us to cast Dark Confidant. Blue Tron decks have begun emerging as the newest Control deck to take Modern by storm.

But not, you know, by Storm.

Let's check out some decklists!

Storm hasn't been very popular on Magic Online recently. The deck can be soft to Jund, where Thoughtseize and Inquisition of Kozilek backed up by a strong clock can cause some big problems. To make matters worse, Abrupt Decay deals with Pyromancer Ascension in a pinch. Still, the deck performs well in racing matchups where it has a significantly faster average clock than anything else. Unhindered, the deck can kill the opponent on turn three or four with high levels of consistency.

Blue-Red Delver of Secrets decks have become, alongside Affinity, one of the best aggressive choices for the format. The deck aims to apply early pressure with Delver of Secrets and Young Pyromancer. From there, the deck controls the board with incredibly efficient disruption and burn spells. The deck is at its best against creature-based strategies, where it's virtually impossible to present any kind of board presence in the face of Lightning Bolt, Pillar of Flame, Electrolyze, Vapor Snag, and Snapcaster Mage.

2 All Is Dust 4 Karn Liberated

Green Tron decks put together all three Tron lands with startling consistency on the third turn. Once this is accomplished, the deck starts playing massive spells like Karn Liberated. The deck is strong against non-combo strategies, especially control decks. In a long game, the deck can eventually cast Emrakul, the Aeons Torn after searching for it with Eye of Ugin.

Living End is a combo deck that aims to fill its graveyard with creatures before casting Living End off a cascade spell, killing all the creatures in play and filling its own board with bodies. The deck is at its best against non-blue creature strategies. Decks with a lot of countermagic pose a huge problem for the Living End deck.

Melira Pod plays like a strong midrange deck, but, given the right circumstances, it can employ one of its two combo kills. The first involves Melira, Sylvok Outcast; Viscera Seer; and a persist creature—this allows the deck to gain infinite life with Kitchen Finks or deal infinite damage with Murderous Redcap. The second combo involves Archangel of Thune and Spike Feeder: This combination allows the deck to gain infinite life and make all its creatures get infinite +1/+1 counters. The deck is weak to decks with Anger of the Gods and other disruption/removal, but those are still rarities. The deck tends to have strong or even matchups across the board.

3 Hero of Bladehold 4 Leyline of Sanctity

White-Black Tokens aims to disrupt the opponent with early Thoughtseize and Inquisition of Kozilek before employing an army of tokens to flood the board. Most of the removal in Modern is single target and this deck attacks from an interesting angle. The deck excels against Affinity, where Lingering Souls and Zealous Persecution are at their best. The deck is also strong against Infect, which is rising in popularity. The combination of disruption and power threats is always going to be scary to play against, and the deck doesn't have any truly horrible matchups. That being said, when we're playing anthems, discard, and token producers, there are going to be a lot of games where we draw our cards in bad ratios and lose games where we were very far ahead.

Affinity remains one of the best aggressive strategies in Modern, but the format has been adapting, and the deck isn't quite as dominant as it might have been six weeks ago. Nowadays, we're seeing a lot of artifact hate in sideboards—usually three or more cards. Cards like Electrolyze and Forked Bolt are seeing play, and Lingering Souls is making a mini-comeback. Nevertheless, Affinity remains the most powerful aggressive strategy and is a great deck to play with if you're planning on playing the same thing through an entire PTQ season.

Tarmo-Twin is a tempo-based aggressive strategy that has the ability to win the game out of nowhere if the opponent is ever brazen enough to tap out. The deck was much better when it was unknown, because players would freely tap all their mana in the face of a Tarmogoyf, but there's still a lot of power here, and it seems like the deck could be a great choice for the upcoming PTQ season.

2 Electrolyze 4 Search for Tomorrow 2 Anger of the Gods

2 Valakut, the Molten Pinnacle 4 Scapeshift 1 Boseiju, Who Shelters All
75 Cards

Scapeshift is a one-card combo deck that aims to get enough lands in play to cast Scapeshift, searching for enough copies of Mountains and Valakut, the Molten Pinnacle to kill the opponent out of nowhere. Scapeshift's recent Grand Prix victory brought it out of obscurity. The deck performed poorly at the Pro Tour in the face of Blue Moon and the general popularity of Blood Moon, but those cards are seeing less play now than they were seeing then. The deck is resilient to discard-based disruption because it plays a single-card combo where the card can't be plucked by Inquisition of Kozilek. Even if the Scapeshift gets Thoughtseized, the deck can go digging for another copy and win when it finds it. Against combo decks, the deck gets to play the control role until it has enough lands in play to Scapeshift.

Jund is the best "control" deck in the current Modern format. Inquisition of Kozilek and Thoughtseize clear the way for the deck to take the game over with Dark Confidant or apply a lot of pressure with Tarmogoyf. The deck plays the best disruption in the format, the best removal in the format (Lightning Bolt), and the best threats in the format. This is definitely a great deck to pilot through the Modern PTQ season.

Infect is one of the few decks in the format capable of turn-two kills, and it's not even that hard for it to accomplish. The deck can be shut out of games by Lingering Souls or Bitterblossom if it can't find and stick Rancor, but the brutal speed of the deck lets it get some free wins, even in those matchups. In long games, the deck uses Inkmoth Nexus to grind away. Gitaxian Probe thins the deck, essentially making it 57 cards, while giving us full information of our opponent's removal so we can know the right time to go all-in.